How to get to the CX-9 spark plugs

Just use the factory plugs. You will gain nothing from "performance" plugs.
G

autozone recommend iridium and i insisted on platinum. they pissed me off so went to the dealer and bought the oem spark plug. same price, already gap. noticed it runs muched better than the old oem i replaced.
J

Great threads!!! I have completed the plugs and coil replacements. I had to send my computer out to be repaired and it should be back on Friday. Once question...is there a fuse for the computer? I had zero spark before I sent it in and was just wondering if maybe there was a fuse blown? I had a coil melt down in the #1 cylinder and am thinking it not only killed the computer but blew a fuse as well. Anyone?
J

The pictures and directions from "Snowie" were pretty much right on the money, but there were a few differences with my car. Not sure if this is a model year thing or what but anyway...
1. There was no electrical tape holding the cable harness to the manifold in step 23b. There was a plastic friction grommet there which I had to pry out.
2. Step 23c says 6 bolts - on my wife's car there was another bolt holding the manifold onto the engine. It was hard to see because it is tucked up under the firewall. It attaches the intake manifold to a metal bracket that sticks up off the back side of the engine from somewhere. I had to use a 8mm socket on a long extension to get it loose (the post from "petesamprs" mentions this bolt, so maybe "Snowie" just forgot to write it down).

Other than that, everything came apart and went back together smoothly. Took a couple of hours to do. The old plugs had worn away to about 0.075" gaps in 63,000 miles. The car is definitely peppier now. Hopefully the mileage gets better.
Last edited: Feb 21, 2016

Good luck. 5 out of 6 went great/normal for me, the last one locked up on me. Long story short, if I have a #6 plug ejection at some point, it will be a major bummer, but not a huge surprise. It's locked in there enough to get the coil bolted down properly, just not sure if that #6 spark plug will stay put. I can't emphasize this enough: hand tighten only!!!!! which I did, but apparently I wasn't gentle enough with my hand tightening as it locked up suddenly 1/2 way.
J

^ seconded. Be very careful threading in the new plugs. The old ones were really in there, it took a lot more force to remove them than 133 in-lbs. Put anti-seize on the threads of the new plugs and hand thread them in until they contact. Use a torque wrench to apply the 133 in-lbs. 133 INCH pounds is really nothing....
L

I just changed my plugs today at 112k. I opted for the Autolite Iridium XP. What a PITA the job was as it took 3.5 hours to do it. I don't have very big hands and some of the disconnections where quite tight. Good news is that my check engine light for the Oil Control Valves went out, but I fear it is only momentary.

Is there a video out there somewhere?? I've been looking to no avail
S

Brucie66 said:
Is there a video out there somewhere?? I've been looking to no avail
Click to expand...

The thread has all the info required and more. For example - when I did my 2008 CX9, some of the brackets are differently located and did not require removal. It is a very straight forward process, but a little time consuming the first time around.

If it is an issue of confidence with pulling it apart and putting it back together - there are other generic videos such as Mac T with his Ford Edge and others. They can show you the dielectric grease, and a bit of anti seize (aluminium head) etc. Maybe those might assist in putting the head around the procedure - if that is what is required? Other things that might be worth taking of note of are the levering out of the ignition coils (gently), the tab for undoing the wires to the ignition coil. Many generic videos out there that will cover many of the details - right through to how to gap a plug properly. Don't forget - it is a Ford v6 Duratec engine - could point you in the right direction.

One technique I sometimes use if I am a bit hesitant with things is a bit of masking tape onto the parts I remove, numbering as I go. Reverse order to re install. Or the trusty phone taking pictures as I go. I am sure if this is the stuff that you are after - there are plenty of gents (ladies?) more knowledgable than me to pass on their tips.

Couple of things I noted when I did mine - the plugs will have to be gapped, don't drop anything down the induction (cover with a clean rag), set aside plenty of time so it is just a process that might even be therapeutic rather than a rushed item.

I guess it is like other items to service....I changed the power steering fluid not long ago. Turned out to be very simple once I got stuck into it. Gone is the nasty brown stuff with who knows what metallic flecks, now yummy pink stuff and nice steering. Done - no need to worry about that for another few years. Never done it before - but just did it after a bit of reading.

The Ford Flex video showed what I'm concerned with, since I'm really a bit nervous about messing up my ride.
Thanks!
T

is it a good idea to change the ignition coils at the same time when swapping out the old spark plugs ? or it's not necessary ? thanks in advance

I wouldn't replace coils.
Maybe 10 years 150k miles.
I changed my plugs about 15k ago last year.
I have yet to have a misfire detection
or any issues. Mine is an 08, 93k. Coils should last awhile.
T

helbigtw said:
I wouldn't replace coils.
Maybe 10 years 150k miles.
I changed my plugs about 15k ago last year.
I have yet to have a misfire detection
or any issues. Mine is an 08, 93k. Coils should last awhile.
Click to expand...

great Thanks helbigtw for the heads up, I'll leave them alone then, much appreciated.
C

tomcat1446 said:
is it a good idea to change the ignition coils at the same time when swapping out the old spark plugs ? or it's not necessary ? thanks in advance

Where do you guys buy the intake gaskets. Any recommended sites?
K

chumanji9 said:
How many of the gasket do I need to buy. Is it 3?
Click to expand...

Looks like Qty. 3. See posts below from Davicho and 4wdmotion

Quote Originally Posted by Davicho View Post
My CX-9 is a 2007, so it came with the Duratec35, and since I work for Ford (among other car lines, none being Mazda) I simply used Ford parts. I am not sure if 2008 and newer CX-9s with the 3.7L has a different intake plenum design, but if not these are the part numbers I used:

Quote Originally Posted by 4wdmotion
I purchased the gaskets for my 2008 CX-9 yesterday. Mazda uses a different part number than Ford, but the part IS the same.
The MAZDA P/N for the gaskets is: CY01-13-135
On the package, in much smaller type, is the same Ford P/N that Davicho mentions above. So, apparently, the same gaskets are used, even between the 3.5L and 3.7L engines.

*Be aware that I had to call 6 Mazda dealers before I found one that had these gaskets in-stock. And the Parts guy told me that the only reason they had them was because someone had ordered them back in March and apparently never used them. He said that they are NOT a Stock item....which is the same response I got from the other dealerships too. I suppose when more CX-9 owners come up in mileage to where they want / need their plugs replaced, maybe they'll become a stock item.
Just wanted to mention it in case anyone plans to change their plugs and thinks they will be able to get the gaskets the same day - they will likely need to be ordered.

***BIG Thanks to Davicho for his insight on replacing the plugs!!!
D

Pootie Tang said:
Thought I would add my experience here. Just did them on my 2008.

Thanks for the info thus far. It's helped me move through the job.

Here are my tips: 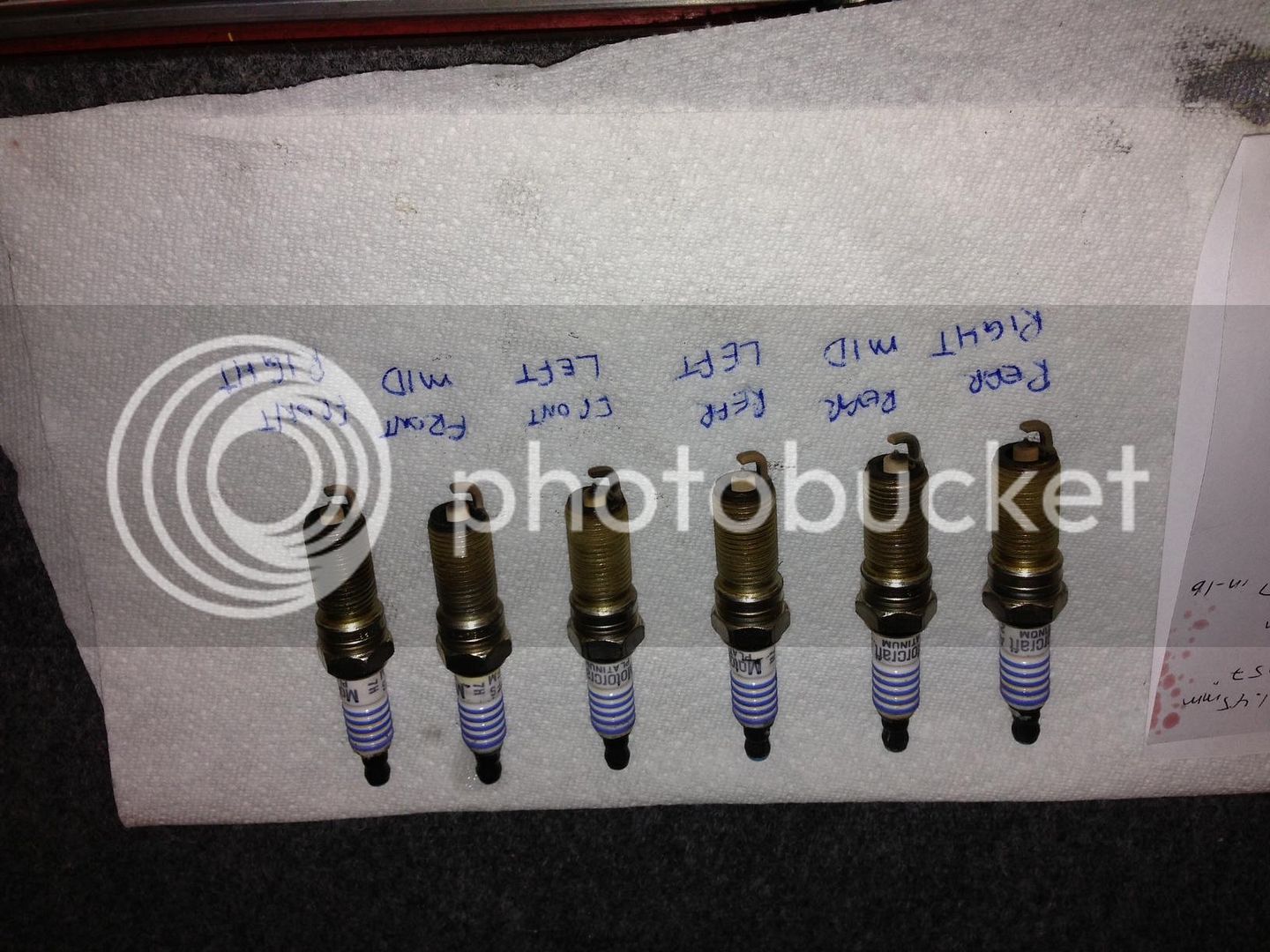 3. I have read that some say you can reuse the green gaskets. Mine looked good but compared to the new ones, they were not very flexible and felt "dry" and hard. These should be replaced.
4. This job is a bit of a PITA, buit with some clever hose removal, it's not so bad. BLOW the engine and crevices out with compressed air prior to diving in. Removing the plenum is fussy and hangs up on numerous things. This can knock debris into the intake runners.
5. The two back hoses are the toughest. For the passenger side one, I waited until I had the plenum lifted off a bit and could get to it. I pulled it off from the valve cover end. Slight twist and off it comes. Right next to it is an electrical connector that is almost hidden. You can remove it "blind" if you try.
6. For the hose with the "fishnet" behind the throttle body, I traced it to behind the battery. I removed the battery and then removed the bracket shown (in red circles). Pretty easy. I could then get at the hose end there and fished it around and removed it with the plenum. 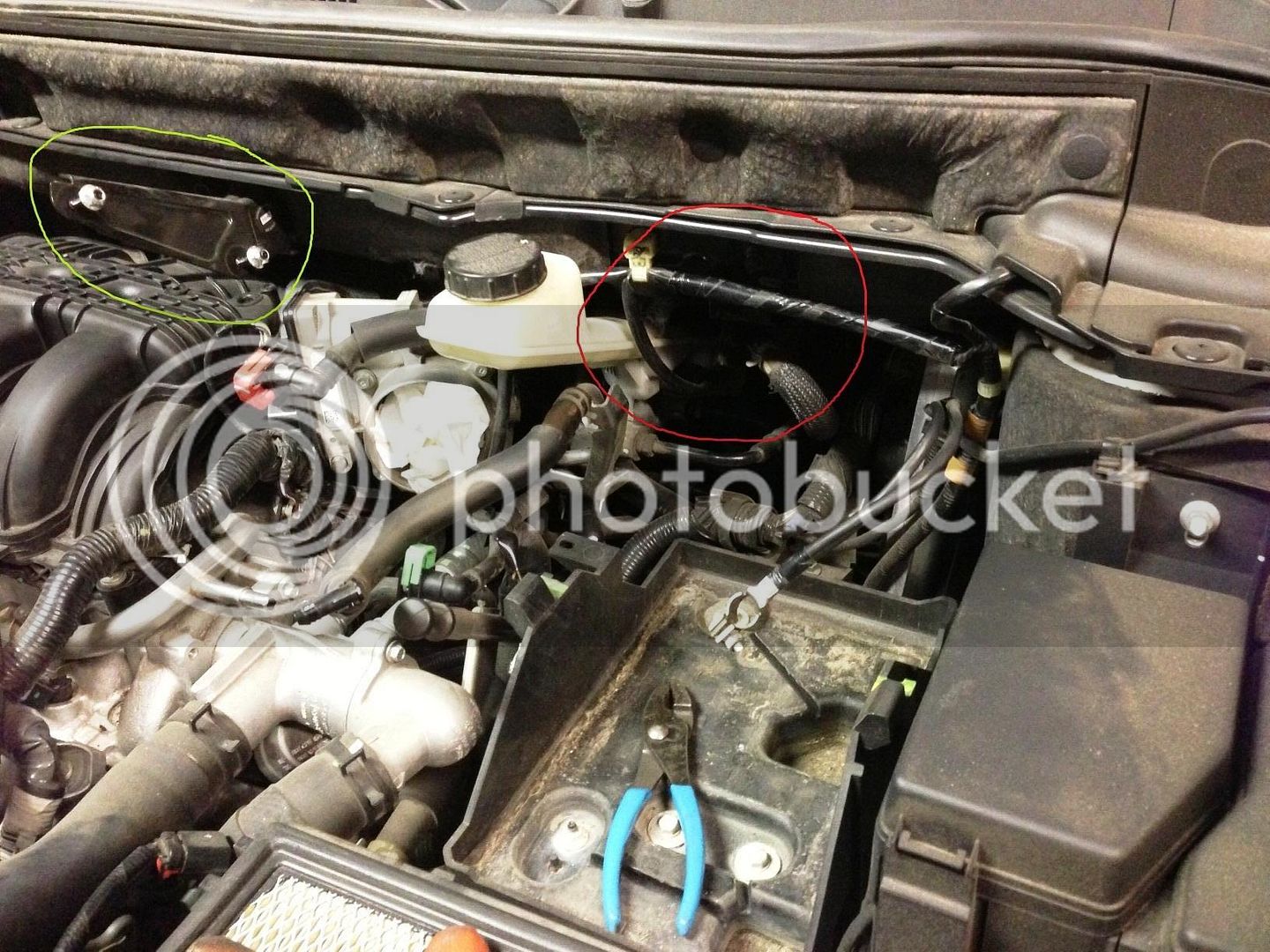 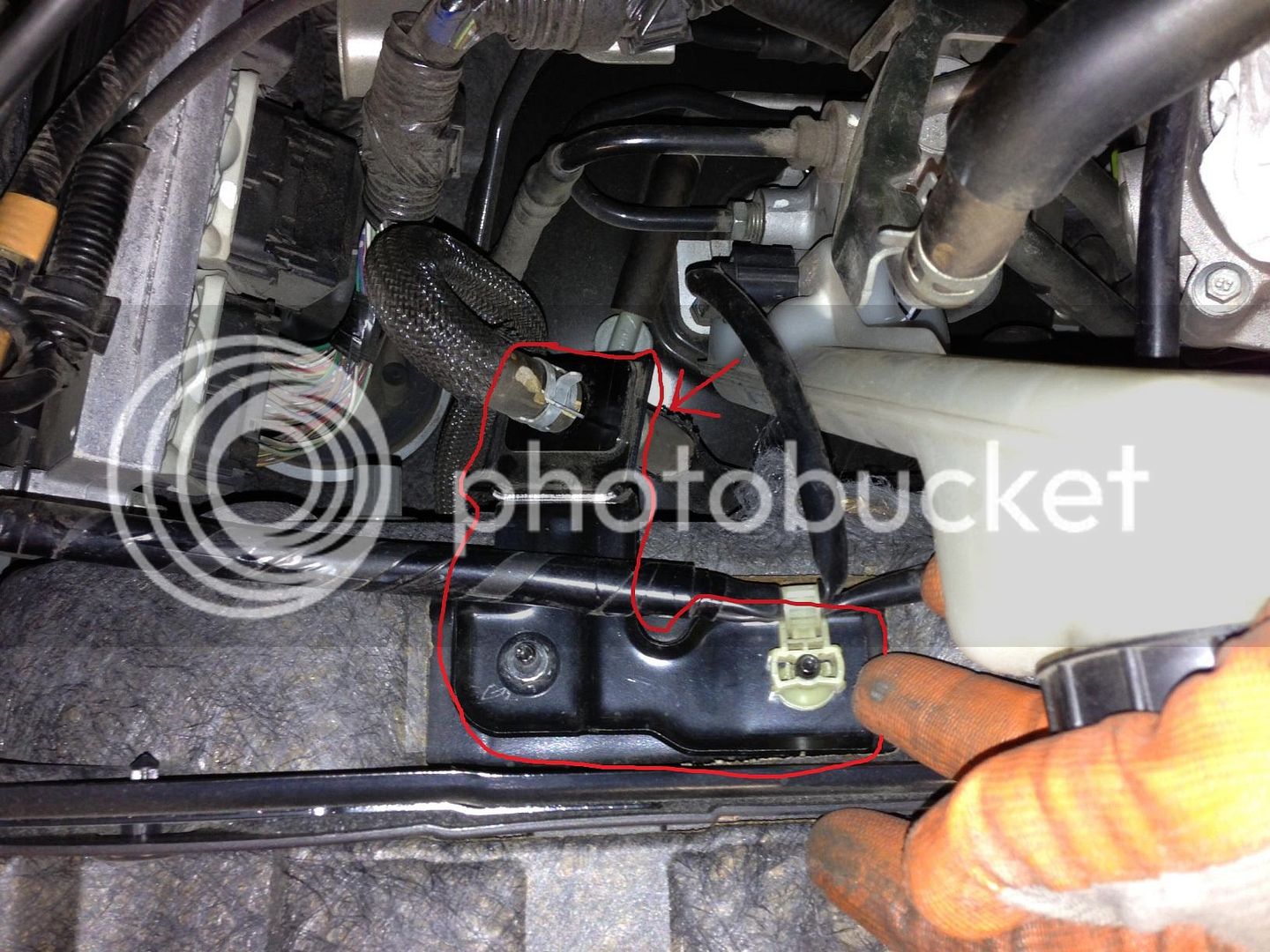 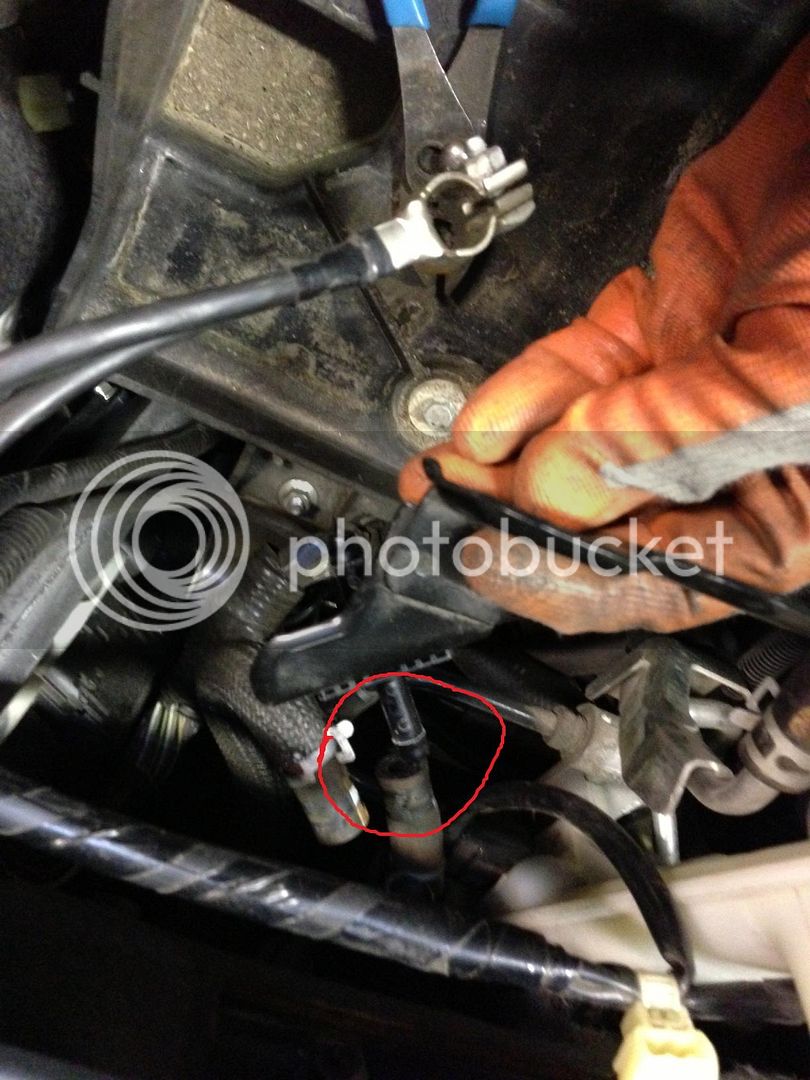 7. I needed to remove the valve directly above the throttle body for clearance (green circle).
8. The plenum is a tight fit but comes out straight towards you with a little fussing.
9. Be VERY careful not to drop anything into the intake runners. I placed a towel over them once I could.
10. I agree with the warning not to use power tools on the plugs themselves. This seems like an engine that is not very tolerant of brutality.
11. The coils were a bit stuck. I pried carefully from under and to the right of the screw mount hole to ensure I was prying against the full thickness of the bracket and they popped up with a little effort.

I can only imagine a careless mechanic doing this job. Small washer down the plenum or dirt/debris. It's also easy to lean on the air conditioning hose on the passenger side. Too much leaning and this thing is going to leak really soon. Easy to "break" the thin wires of the numerous electrical connectors. Each one of these will not manifest itself right away, but will almost certainly result in frustration and difficult troubleshooting to come- all without the culprit to blame and your time and money as the casualty. I strongly recommend participating in watching your mechanic do this job. If they mind, find a different mechanic. In all, took me about 2.5 hours, working steadily. 2 hours I suppose the second time around.
Click to expand...

I did this a while ago too and I am sure it was the first time the plugs had been changed. The engine had started to lunge a bit at highway speeds, that's how bad the gaps were. Once replaced, the engine returned to its normal glory days. Nice write up.
You must log in or register to reply here.