Suspension and other misc stuff

It's been quite a while since I last posted, but as the thread title says...yeah..time for it. My 2010 (aka The Tour Bus) now has 164,xxx miles and after much thought, she'll stay in the family. It MAY go to my son or I'll keep it and get him something.
Anyway, since this thread here, clunkng is back (it's been a while, just never bothered to deal with it until now).
I've ordered the Monroe suspension kit from Rock Auto, as well as brakes. I was really hoping someone would have some polyurethane front swb bushings that were NOT greasable, but no luck there, so I'm getting some regular Moog replacements.
Time for brakes again as well.
Also time for a throttle body cleaning, as I have a stumble/loping idle...
I picked the worse time to try and work on the car since it's getting cold and I don't have a garage, but I'll post back with the results when I get around to it.
Other than that and another wreck (people just keep trying to kill me), she has been bullet proof. Hands down the best and most reliable car I've ever owned.
Later..
P

I'm hoping to get started on my repairs I mentioned above tomorrow. I did some pre-prep work this evening by getting the car up on jack stands and hitting all bolts I'll need to loosen with some PB Blaster. My biggest worry was whether the rear shock mounts were cracked, but they're in good shape. Tomorrow morning I'll start first light as it's supposed to rain later during the day. My plan is to hit the bolts and nuts again with some more PB Blaster and work on the small stuff like the front swb bushings, cabin filter and cleaning the TB. Wish me luck!
EDIT:
My plans proved a little too ambitious. Aging is also a variable I had not accounted for LMAO.. Essentially, the same things I was able to do 5 years ago proved a little more difficult this time. I was only able to get ONE nut loose for the swb bushing on the passenger side. With the threat of rain I abandoned that plan after an hour or so and turned my attention to the TB. That went well and with no issues. I also got the cabin filter changed. It's been MORE than 5 years since that was changed and it showed.. 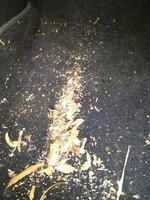 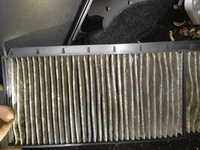 .... so yeah, if you haven't done it, do it!!
One thing about the SWB bushings.. You canb actually get to them from the top if you have an extra long extension and a swivel head socket, but of course that will not do you any good since you have to get them back in there!!
I'll just wait until I can get help to do the shocks and struts..PLUS, I obviously had not looked closely enough at what would be involved to get the driver's side strut out..Have to move the brake reservoir!
So the next step is to find a friend with a garage or a lift and knock everything else out!
Last edited: Dec 1, 2018
P

I just went in from the bottom and reached over the top for the sway bar bushings. Pain in the ass.
S

(Long) So I FINALLY got the parts installed. Due to the thing called Life, I could never find time or good weather to do it, but finally this past weekend was perfect. Started Friday evening and finished up Sunday. Shocks, struts, brakes (rotors and pads), end links front and rear and sway bar bushings up front. As usual, the bushings were the toughest, but with car jacked up a little higher than before, I was able to get it done like I did the first time (I have NO intention or removing the sub-frame). All parts were stock replacements (Monroe shocks and struts), ordered through Rock Auto except for rear shock mounts which I ordered thru Tire Rack (KYB) and didn't use because they didn't come with bump stops and I could not separate the old bump stops from the mounts. The mounts were in good shape and not broken so I just cleaned them and put them back in.
Brakes were the Power Stop (Daily Driver category on Rock Auto). Nut sizes for the replacement shocks and struts are larger than stock. The old rear struts could be compressed by hand but came back out pretty good, and the car was never bouncy. Replacement of the shocks is pretty straightforward (don't forget that deep well socket!!) The struts however..I tackled the driver side first since the brake reservoir had to be removed to get to the bolts. Getting the bottom of the strut out of the knuckle was also time consuming, even with copious amounts of PB Blaster that was applied prior to removal. It helps to have someone assist with the replacement, but to finally get the strut seated all the way in the knuckle, I used the claw of a hammer to slightly spread the knuckle and the strut went right in. The passenger was faster both in removal (Hammer and a block of wood) and replacement. Once everything was buttoned up, went for a test drive, bedded the brakes (https://brakeperformance.com/bedding-in-rotors.php), drove it home and parked it. I did a nut and bolt check today and bled the brakes and she's good to go. End links were definitely shot and easy to replace.
Some notes on the shocks and struts. The ride of the car is not SIGNIFICANTLY better than it was prior to replacement. The struts are pretty close to the originals in in terms of ride quality (originals had FoMoCo stamp). The fronts though feel somewhat softer than the original ride, so the front feels a little "floatier" than usual over undulations at speed. Not a big deal but different. If anything, the car is a little quieter, but the tire noise seems louder and these are relatively new tires (Ohtsus, replaced almost a year ago).
So to close, I got my moneys worth from the original shocks (replaced at 168,xxx miles), second brake pad/rotor and front swb bushing replacement. It's good to not have any clunking, at least for a while ;-)
Last edited: Apr 5, 2019
Please log in or register to reply here.