So the girlfriends 2011 Mazda 3 has a "small EVAP leak" I forget the exact code. I did a search and started with a new gas cap, no dice. Then I did a bench test of the purge control valve and it seems ok. I removed the back seat and did a visual inspection of the top of the gas tank and it seems ok also. It also has a metal retaining plate and not a plastic nut for the sender unit to gas tank, I did see where the nut can crack but it seems she has an upgraded style. Finally I jacked the rear end up to explore for the canister purge valve.

So below is what I seen. It actually looks great for the age and the fact we are in southwestern PA. The actual canister purge valve is behind the suspension spring tower, it seems like a real chore to get at so no bench test for it. The best I can tell the connector in the orange circle comes from the engine and its labeled purge on the canister. The connector in the red circle goes to the tank, it is labeled tank. The green hose goes to the canister purge valve then somewhere further up. The first test I did was take the line going to the engine off and did a pressure test... where I blew into it real hard. Anyway it passed. The second thing I did was take the line going off towards the purge canister and pressure tested it after wiping it off with a standard show towel. You can blow straight through there. Am I on to something? Im more of a diesel and 2 stroke mechanic of sorts than an evap person. I would have taken the purge canister valve off at this point but I dindt want to dig further unless I was on the right track. Thanks!! 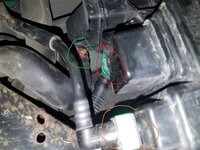 Were you referencing a service manual when determining how to test the purge valve? Sometimes, a crude test is not enough to determine whether the part is good or not.
Please log in or register to reply here.
Share:
Facebook Reddit Pinterest Link