After reading about all the goodness of the QFord shifter bushings on the Aussie forums a while ago, I decided to finally upgrade my shifter bushings. All these years, I've been using stock shifter bushings. None of them broke, but while the B&M short shifter I'm using greatly improved shifting, there was still a bit of a dull feel. I bought these bushings from QFord in Brisbane, Australia. It comes as a complete kit: 6 bushings, a bolt, and a nut. The nut and bolt is for replacing the riveted pin that connects the pivot fork on the tranny's end of the shift linkage to the rest of the shift linkage. It must be cut off/drilled out in order for you to replace the bushing. Mazda doesn't want you to replace the bushing and therefore there is no officially serviceable part! And since Kartboy no longer makes anything for the Protege, I also decided to get the RR-Racing shift stabilizer urethane bushing after experiencing myself how much better it is with the Kartboy bushing on a friend's car. The TWM bushing is more expensive, so I was trying to keep the costs down plus I like to justify the fact that the RR-Racing bushing is red, which matches the rest of the parts under my car. 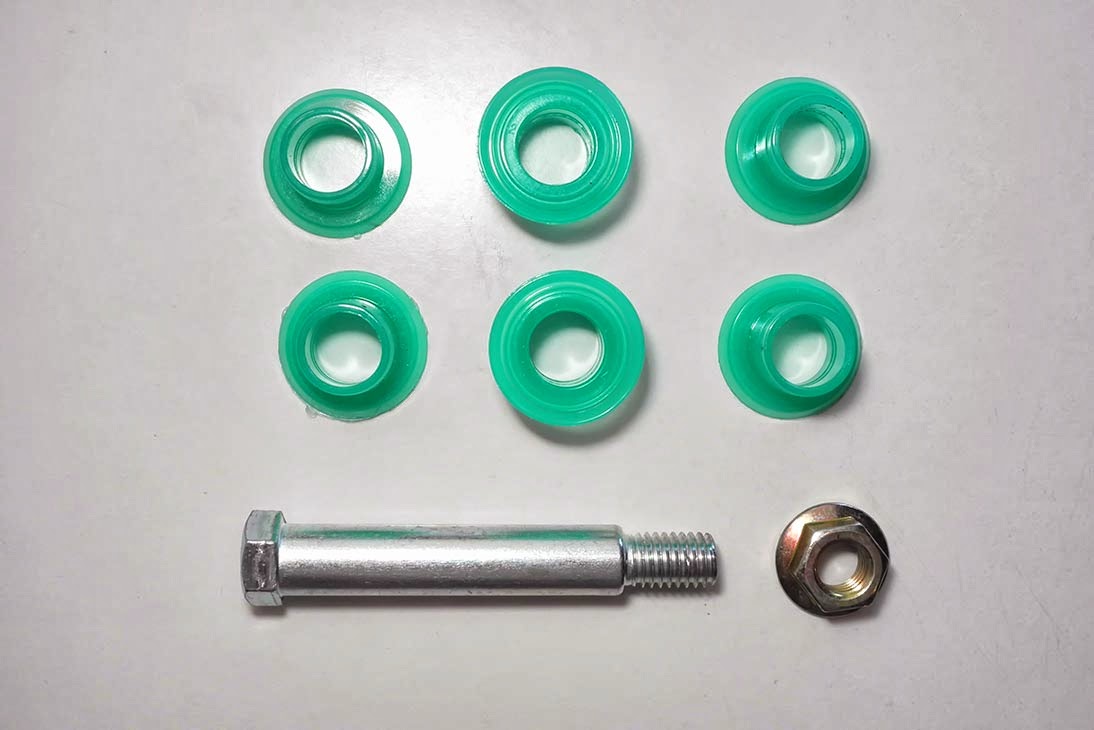 For the pivot fork, you must cut off the rivet. Drilling out also works but you run the risk of drilling into the bracket. One side is the popped side (thinner), the other side is the rivet pin side (thicker). The thinner side is on the driver (left) side of the linkage when oriented right side up. It makes better sense to cut off the thinner side as there's obviously less metal. It's still a real bitch to destroy the rivet to get the pin out. There was enough metal left that the pin wouldn't come out after cutting the rivet. I had to resort to using a small bolt on the cut end, and a socket on the other end and using a C-clamp to press it out! 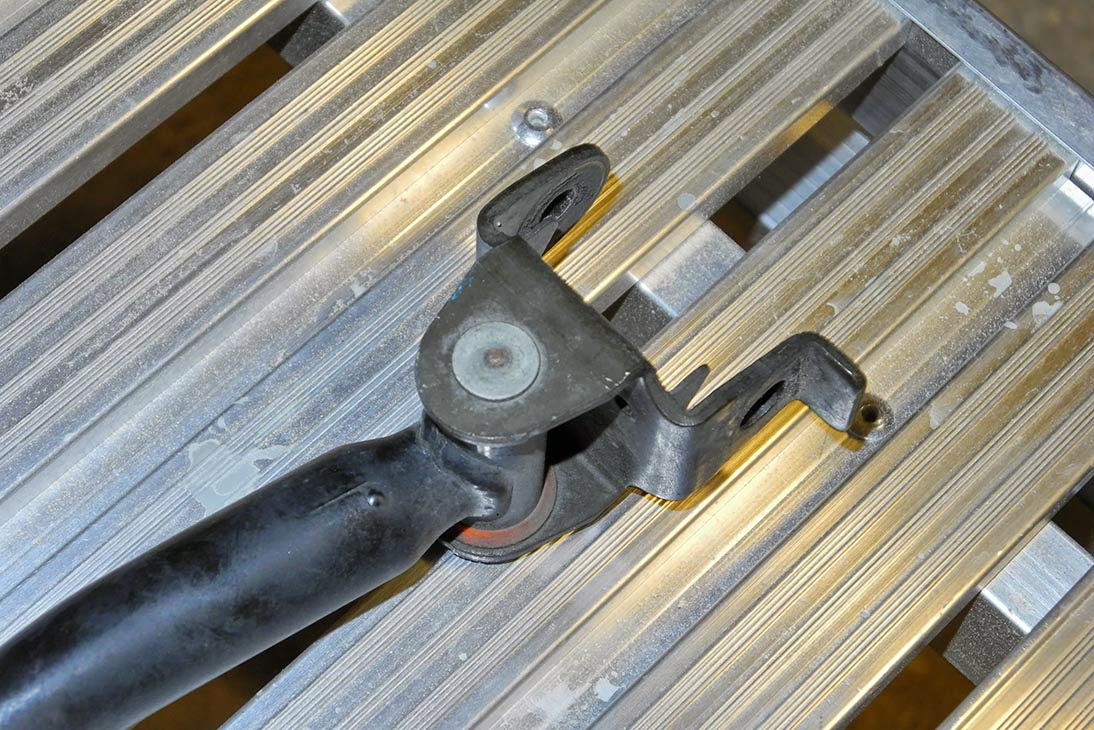 Once it's cut, you can take out those crappy orange bushings and insert the green QFord bushings. I used the same torque spec as the rest of the shift linkage bolts. It is essential you lube the bushings on the inside, the outside, and the flat spot facing outwards. These bushings have grooves in them that trap grease, which is helpful for a smooth operation. 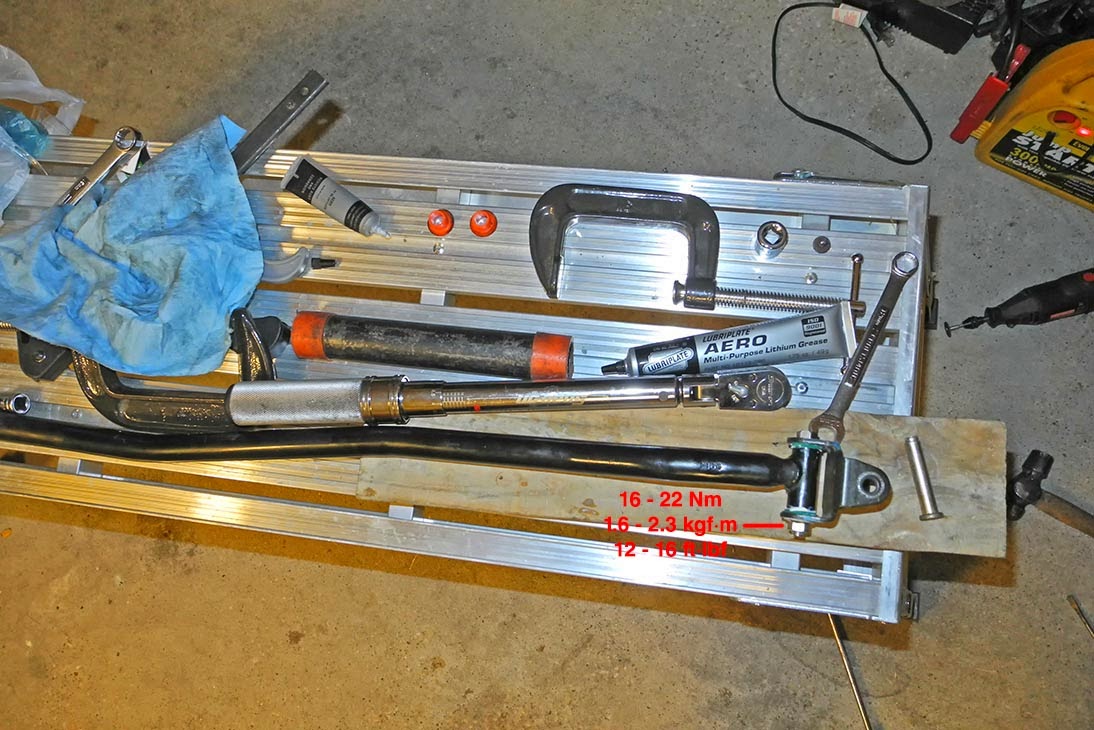 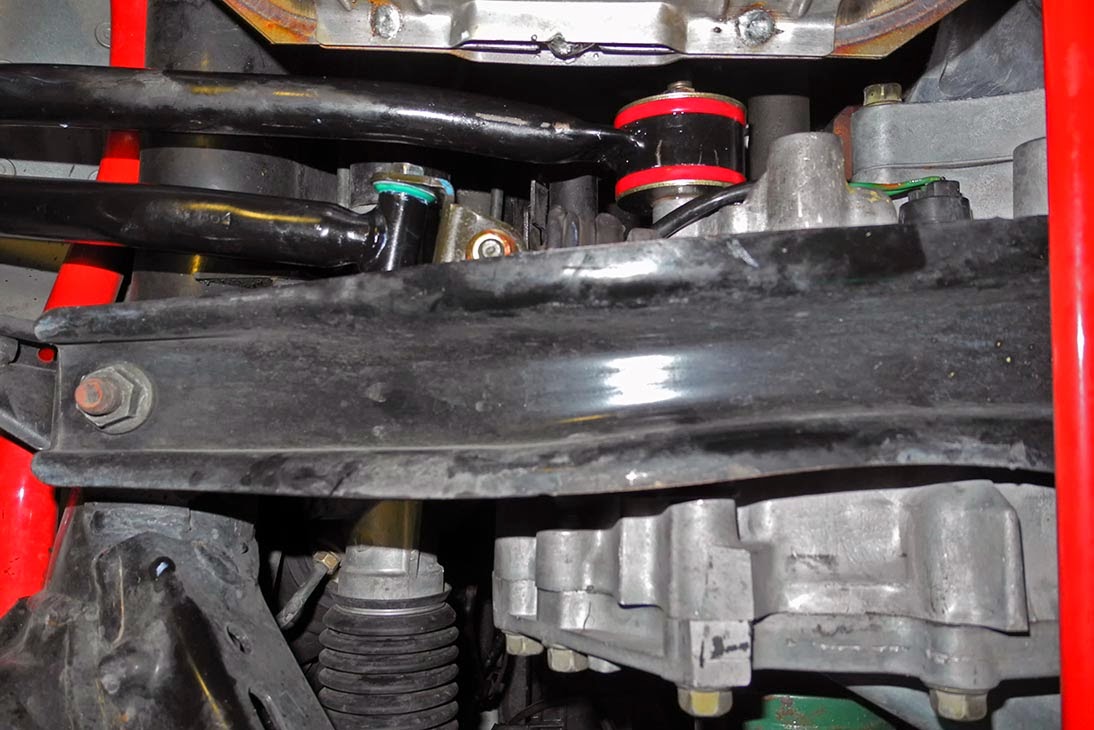 You can find these bushings on ebay. QFord has their own ebay store.


Thoughts: I drove the car around the block. Redlined it a few times after I got everything warmed up. The more I drove the car, the better the shifting felt. Shifts are now snappy and I could really feel the "gears going in". The shifter feels more like a RWD car now. Heal and toe down shifts are also very responsive and lots of feedback felt through the shifter. This upgrade will take getting used to, but it was definitely worth every penny!
Last edited: Oct 3, 2013
T 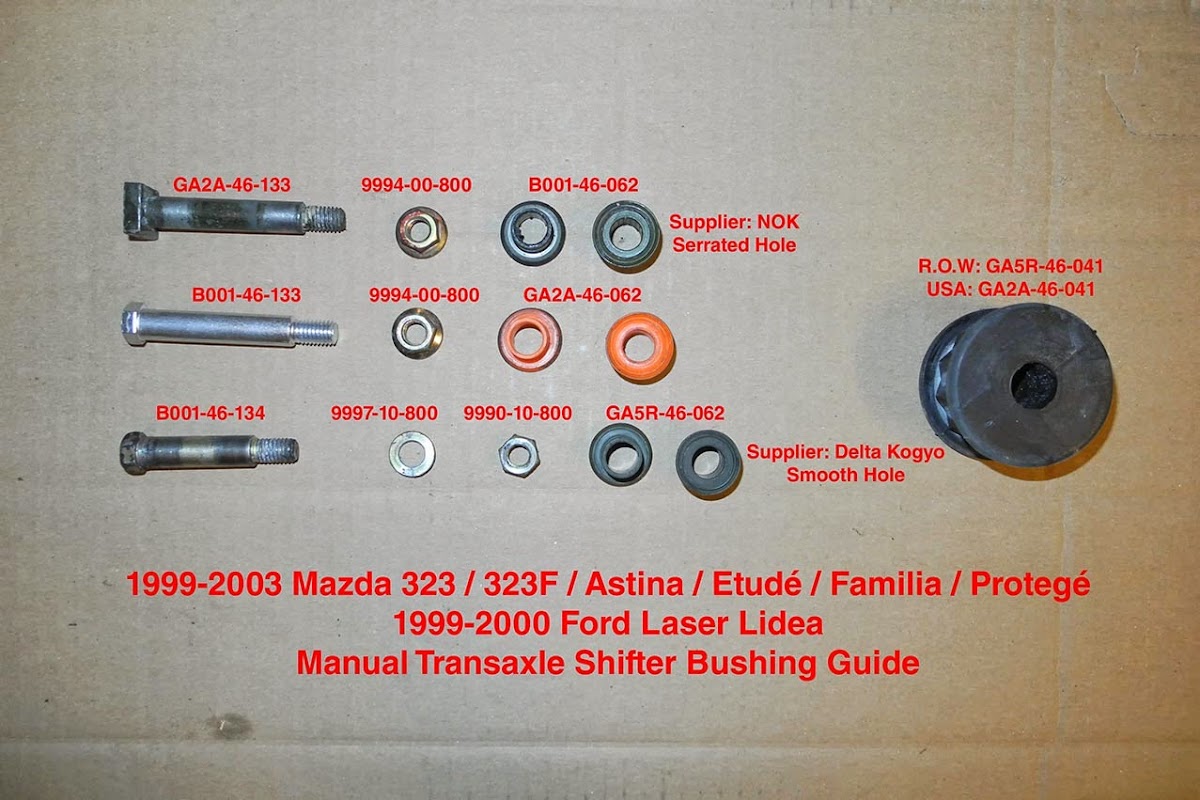 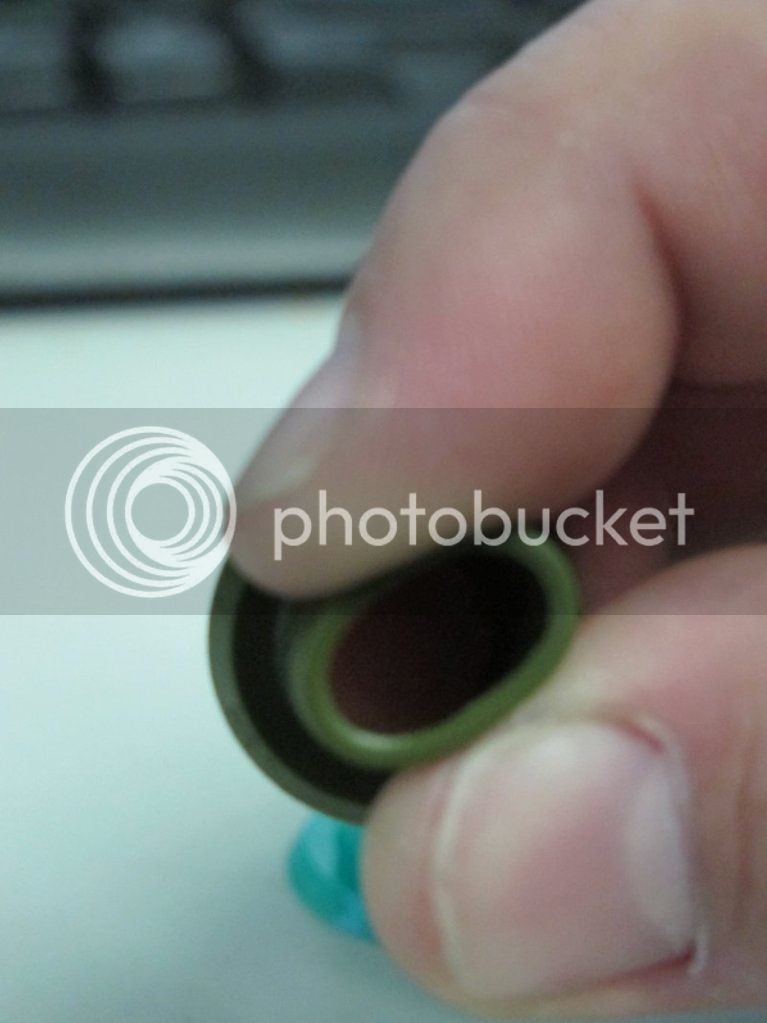 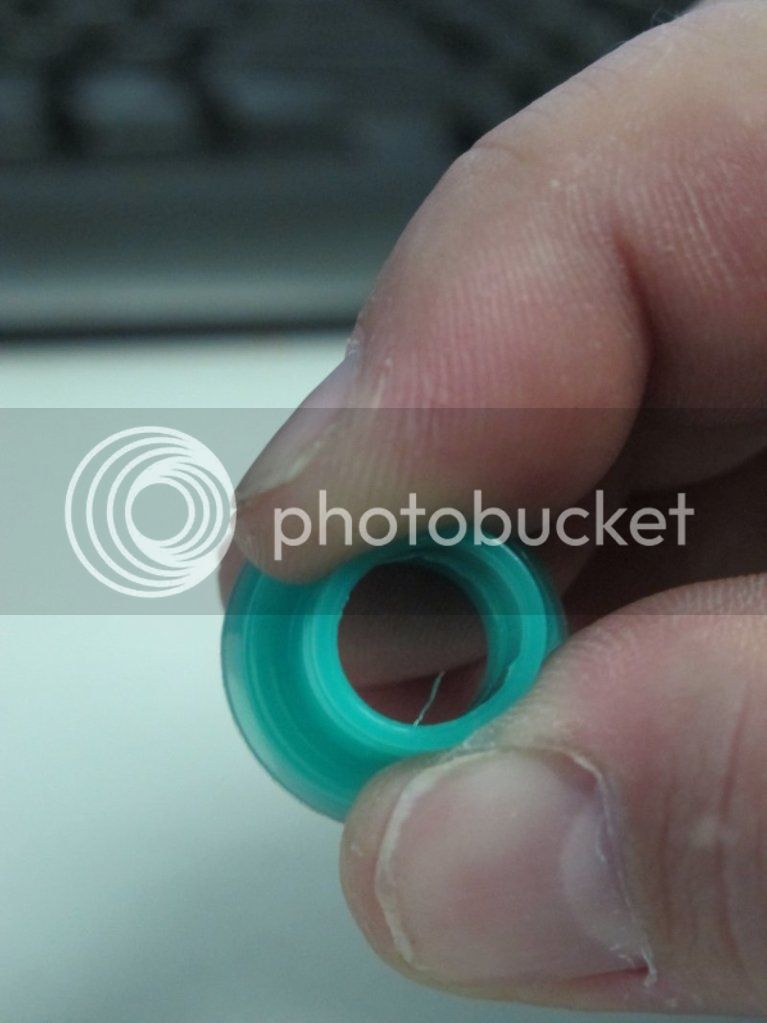 Nice writeup, as always! I just installed the bronzoil bushings and 3rd link kit last week, was definitely a pain to drill out that rivet but managed to do it without damaging the bracket.
C

does any one have the size to the shifter bushing Im trying to see if there is anything comparable to this
http://www.hybrid-racing.com/store/performance-shifter-cable-bushings-hyb-scb-01-09.html
?
H

Those are for cable shifters and are likely too big. Corksport sells the bronzoil bushings made for our cars for half as much as the ones in your link.
C

Got a link where I can find these? I put Bronzeoils in about 8 years ago and they are worn and causing an annoying shifter rattle.

Edit, OK I found them, but how did you get them to ship from Australia? And how much did shipping cost?
Last edited: Jan 31, 2014
P

How did you get them???? I tried but they only ship in australia :s
D

pablosqy said:
How did you get them???? I tried but they only ship in australia :s
Click to expand...

They will ship to the US, it basically doubles the cost of the bushing kit. I have some on the way. Message them first, commit to buy, then you have to request an invoice from them for total with shipping.
M 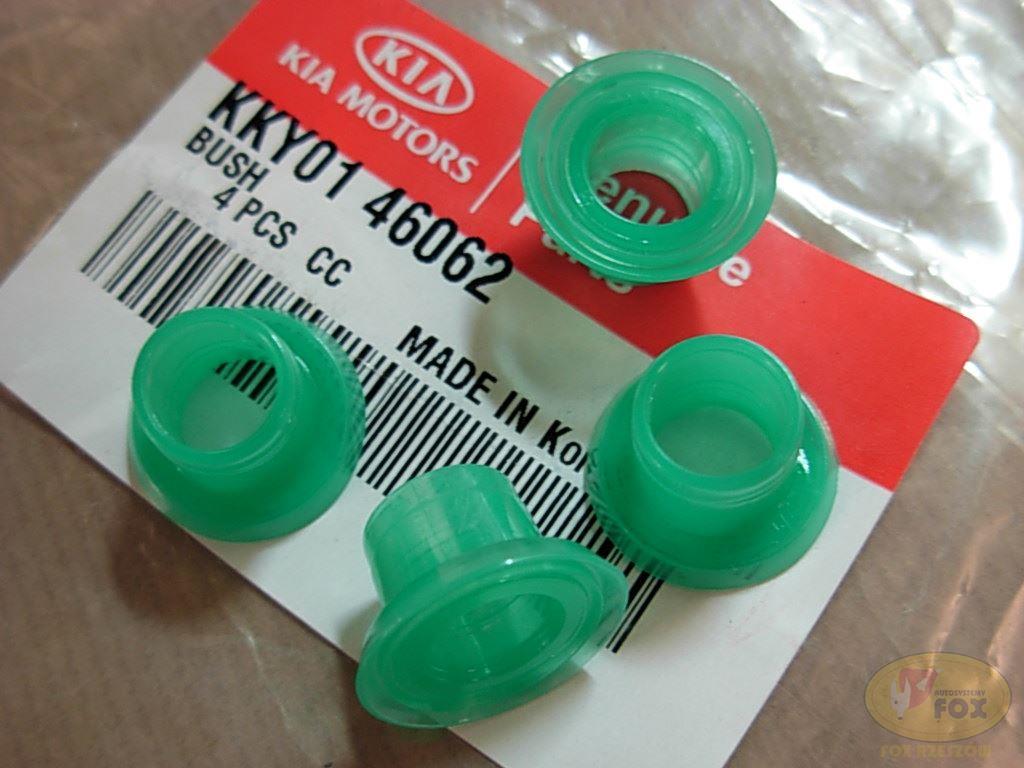 the last 5 digits correspond with the descriptive code in the Mazda parts catalog. these are $1.35 ea. at the Kia dealer.yes I know looks can be deceiving, so just wondering.
D

the last 5 digits correspond with the descriptive code in the Mazda parts catalog. these are $1.35 ea. at the Kia dealer.yes I know looks can be deceiving, so just wondering.
Click to expand...

They sure look the same...
R

thanks man, I will use this asap to get mine replaced.
M

so i bit the bullet and bought them from a KIA dealer. good news is they are exactly as described! A super firm, nylon bushing to replace the softer rubbery (poly?) bushing at the base of the shift lever. Fits other Mazdas (323, 626, GLC, MX-3, MX-6, Protege 5) and Fords.

also good news, if you're going to destroy the rivet to replace the bushings in the pivot fork, there is a KIA part number for that too!
MB00146133 - BOLT
K999400800 - NUT FLANGE
these correspond to their respective Mazda part numbers and will save you $3-4 for having a KIA sticker on the bag instead of a Mazda sticker. if not, it'll save you an extra trip. Now you don't have to go to an Oz/SE-Asian market Ford dealer for the parts. hope this helps.

PS. I also found a delrin equivalent. i am confirming with the retailer about the fitment.
H

Good find! CS bushings are still working great in my car but its good to have a cheaper alternative.
9

sorry to bring up an old thread, but are these kia bushings also for the bottom of the shifter or just the fork
9

915_P5 said:
sorry to bring up an old thread, but are these kia bushings also for the bottom of the shifter or just the fork
Click to expand...

Those kia bushes replace all of the 6 shift link bushes, not the stay rod to trans.
9

Are you sure, cause the bushings on the riveted bolt seem bigger then the the ones on the bottom of the shifter and on the fork.
H