This is the Rockauto version. It doesn't include the head bolts but it does include a new water pump gasket.

I don't know if the water pump has to be removed to do the head gasket but a new water pump is a good idea, being as you are going to be in there anyway.

pcb said:
Check for spark.
Make sure your plugs are firing.

Keep in mind that if your head is warped, the engine simply may not run.

You may be able to get a used head from a wrecker along with a new head gasket and be able to get it running for cheap.
You don't need a new or rebuilt head, just a used one that isn't warped.
Click to expand...

I checked for spark and there was no spark. Also the engine fuse is perfectly fine. I have not tested the relay yet. What should I check for next to get the fuel pump running (there is no pressure in the fuel line).
P

You could use a jumper wire to kick in the fuel pump to verify that it works, but I think your ECU has decided to shut down your engine.


I know that the ECU will shut down the engine if it gets no crank sensor data.

Check out the crank sensor and its wiring.
(I forget if that was mentioned already?)

There is a code for the crank sensor but it never seems to light the CEL.

I think the ECU shuts down the engine before it has a chance to register the code?

Check your toothed ring and make sure it's fully connected to the crank pulley.

It is attached with rubber and has been known to break free and start spinning on the crankshaft.

Make sure that your harmonic balancer looks like this, with the keyway and missing tooth aligned like in the picture.

The toothed ring and outer pulley are glued to the inner pulley and it can break free and slip.

See if your alignment marks correspond with TDC.

Does anyone know if a failed camshaft or crankshaft position sensor could impact the fuel pump relay and somehow make it not work?
P

Yes, with a failed crank sensor, the ECU kills the engine by turning off the fuel pump and giving no spark.

Unfortunately, the ECU doesn't seem to pop a code when it shuts down the engine.

The engine can run with a failed cam sensor but you should get a code.


Other people have had their cars give a single spark and then nothing until you turn the key to off then back to start.

The ECU allows one revolution of the engine while it looks for crank sensor info, then kills the spark and fuel pump if there is no signal.
P

There's been a few people that have had a bad crank sensor and their engine has shut down.
Unfortunately, the ECU doesn't seem to throw a code for the sensor, so you don't know where to start looking for the problem.

If the ECU isn't happy, it will shut down the engine by killing the spark and cutting the fuel supply.
G

Is there a way to check the fuel pump relay?
P

This will energize the relay to turn on the fuel pump. 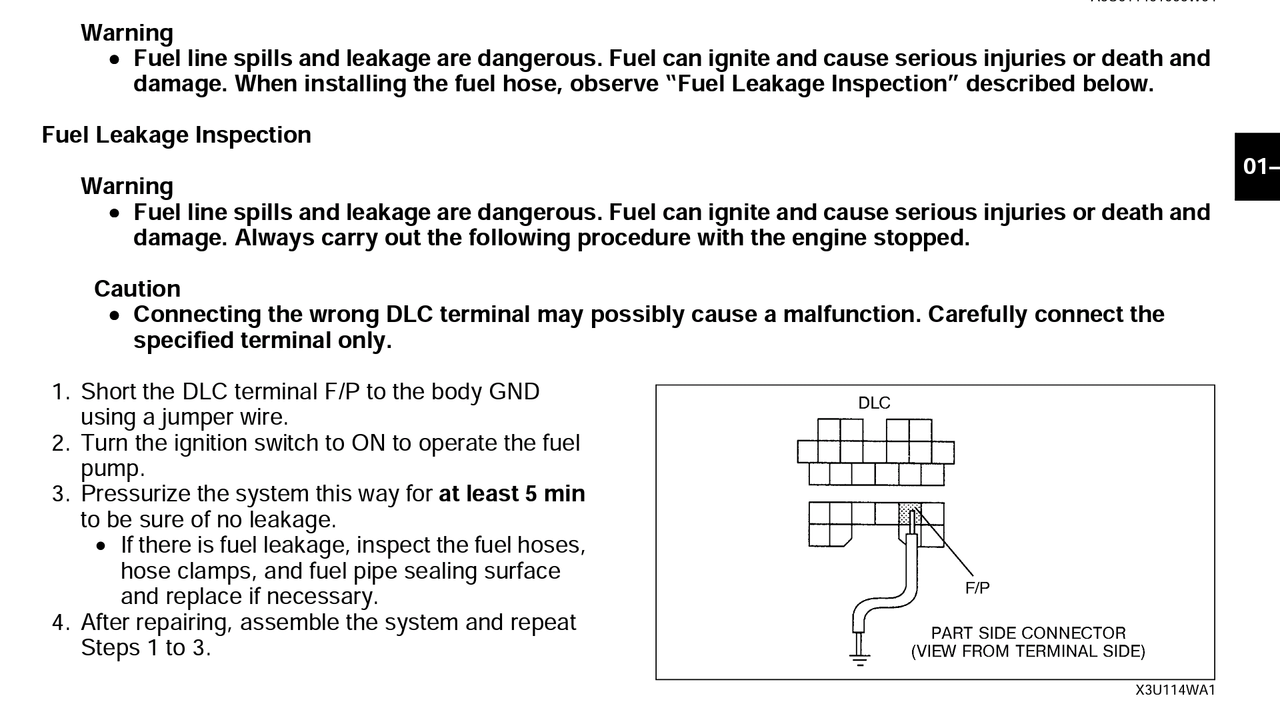 It's located under the hood.

The relay can be removed and tested as well. 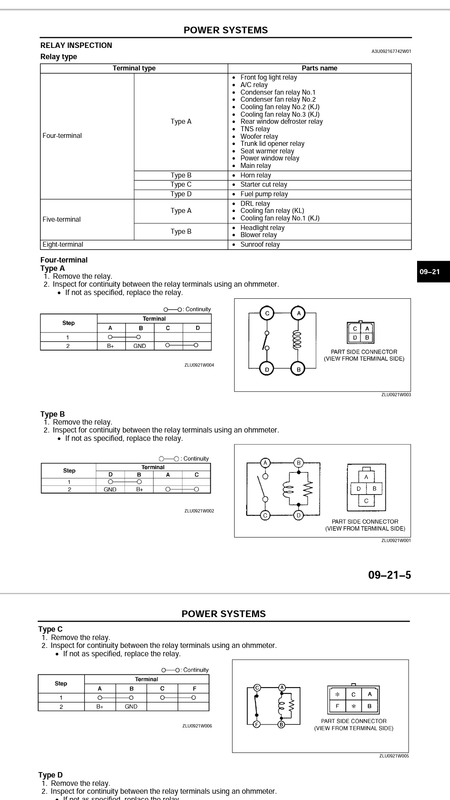 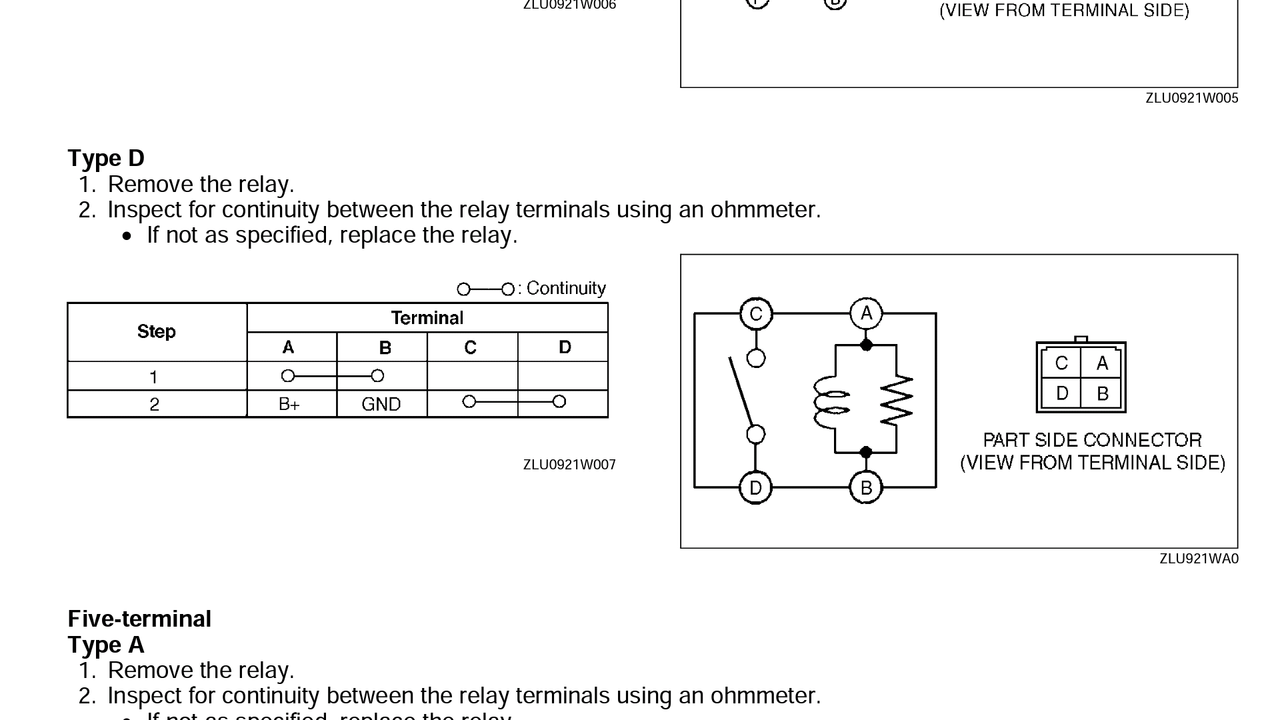 I replaced the crankshaft and the camshaft position sensors and the car still doesn’t get spark, what could that mean?
G

I don't know what to say?

I'm thinking the ECU isn't getting power or it's not happy and has shut down the engine.

You can check for an output from your crank sensor, but I think you need an oscilloscope? (I forget.)

Check the wiring for shorts and open circuits.

Check the clearance of your crankshaft sensor.

I remember a guy posting about going to the wrecker to get a used harmonic balancer and found 3 cars where the alignment marks on the pulley didn't match with TDC.

There were only three P5's at the wrecker and they were all out of wack.

I'll bet they all were at the wrecker because the pulley spun around, killing the car, with no code and they just gave up and ended up at the wrecker.

I'll bet all they needed was a new harmonic balancer.

It's possible that the jolt of having the T-belt skip teeth was the last straw for the harmonic balancer and it spun.

I figure the glue/rubber, helps to absorb vibration.
P

No fire under the hood

Hello all, hoping someone might be able to assist on this issue I seem to have. I've owned the P5 less than 2 months. 2002 P5, auto, 230K. Motor died while driving to work early this week. It does turn over, however slowly, but motor will not fire up. Not even a backfire. Starter was taken out...

I made sure the pulley is right, and checked, there’s still no spark. I tried checking for continuity in the camshaft and crankshaft works and I couldn’t get it to work. Do you have any tips to do that? Also checked the fuel pump relay and main relay they’re all good.
P

Do you have a multimeter and know how to operate it?
P

glav2653k said:
... His 2003 Mazda Protege5 overheated on a highway. His mechanic checked the car and said that the engine skipped time, possibly warped the cylinder head and most likely blown a head gasket...
...other than that overheating the car was in pretty good condition, so he gave it to me to fix it and keep it. Before I have never attempted to do anything with cars.
Click to expand...

If I were you, I would just tear into the engine before spending any money or ordering any parts.

Your engine needs major work or a replacement.

If you can manage to get it apart in preparation for a new head gasket then you're doing OK.

If not, you can plan for a replacement engine or a rebuild and decide how much time, effort, and money you're willing to invest.

I'm 98% your engine is FUBARed but if it's just your time and effort invested, then it's no great loss.

I'm getting mixed up with the other recent thread with a similar problem but he at least has spark.

Your lack of spark is secondary to a blown head gasket.

Don't get in over your head at least financially.
That sucks worse than your time and effort.

Maybe PM him for some pointers.

Or post it here so we can all learn.

I tore into my parts car to pull a piston out and it was a HUGE effort for me, and I'm reasonably handy with wrenches.
I just cut and chopped my way in with no intention or reassembly.
I just wanted a piston out.

No start but have spark and fuel

I just did the timing belt on my newest P5,it is in time,it’s getting spark and fuel but it won’t fire. Noticed antifreeze leaking from the exhaust as well🤢 couldnt see any leaks on the outside but haven’t torn back into yet. What could be the issue though? Warped or cracked head along with the...

www.mazdas247.com
Please log in or register to reply here.