There's lots of thread to grab onto once the head us removed.

Mine let go as soon as I drilled it out. 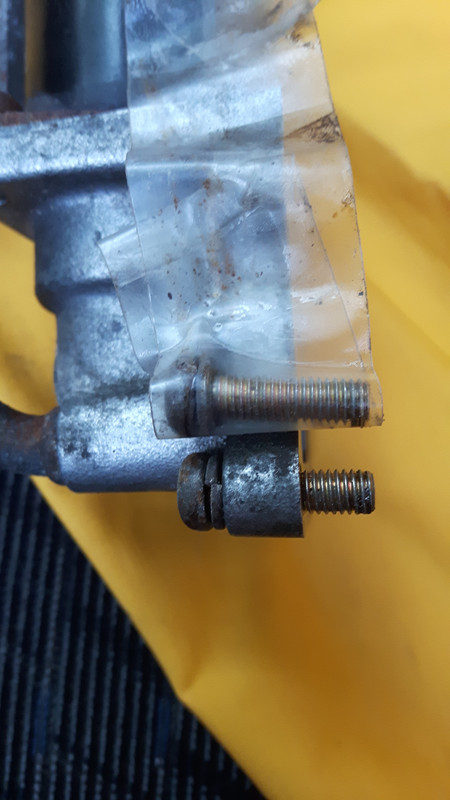 ciddyguy said:
the fuel trims do not budge, at all from 0.0%, both short term and long term, and never budged when I went on a small trip and a couple of errands on my way back.
Click to expand...

Something not right. STFT should change when driving. It should not remain at 0.0%.

I haven't read the entire thread, but have you diagnosed/changed the O2 sensors?
C

The Launch scanner shows them to be OK, at least earlier today and you are right, the STFT should fluctuate between -3 and +3%, the LTFT should be something near 0.0% if I recall, right?

Anyway, will go double check the sensors as it's possible one blew out without me even realizing and it's hard to note the live stream data while driving as the cable is too short, need the extension to read it easier while driving to note what's going on.
C

Overall, did a relearn via another thread where you turn the key on (engine off) for a minute, then turn key off 1 minute than run the engine and let it idle for 15 minutes. at one point, it looked good until the idle dropped almost to the point of cutting out so I blipped the throttle just enough to keep it going and then the idle stayed at 1200-1300 +/- a little but stayed steady and at one point, I got it to stay in idle while both in reverse/drive (with brake on) so that's in improvement.

But the fuel trims stayed the same, no budge.
C

OK, just came back in from being at the car. I did the key on, engine off for a minute, then key off for a minute then started the car and let it run for 15 minutes, it ran at high idle (1200 or so) and it did fluctuate a little, then remained steady, ST/LT fuel trims stayed the same. Car could idle OK while in gear, code, P0102 only, no misfire codes, period.

Then the car almost went into a die mode, I blipped the throttle and it remained at high idle, eventually I shut the car down and restarted it back up and for the most part, it starts like normal, though the first start may not totally catch, but will on the second try.

However, the STFT for B1S1 is reading 0.0%, the LTFT for B1S2 is 99.2% and not moving, Fuel System 1 status is OL Fault and not going into closed loop. Towards the end of this test, I put it in gear and the idle dropped to 550rpm or so and barely could run in gear, instead of staying roughly at 700-800 min at idle, but it did hold on and keep running though!

I'm wondering if continued driving will ameliorate some of this.
Last edited: Aug 30, 2019
P

Did you reset your ECU??

All that's normal after a reset.

The IAC is pretty stupid after a reset.
C

Yes as I had to take out the battery while removing and putting back the throttle body, plus do the key on (engine off), key off and then let idle per Mazda as well.

I figured as much so will do more driving today as a couple of errands will need to be done later this morning.
P

It could just be relearning.

My car stumbles and almost stalls after a reset.

It idles perfectly now though.
C

that is what I'm hoping.

The good news is the car's idle is fairly smooth even at 800-900rpm, but it won't hold the idle well still and drops down to 500rpm and then it gets rough, but I suspect that's because it's barely able to idle much at all a that rpm normally anyway - hence our low idle is 700-900rpm range to start with. When it gets below that it'll frequently just die.

However it has an extended crank, though it can just start via a blip of the key at times.

No smoke that I see, even when I rev up the motor briefly to ensure it stays running. Need to check the oil to be sure it's not gotten contaminated, diluted. I think the car sounds different when cranking? For a time, upon first crank in the morning or when I leave work at the end of a work day, it did blow, momentarily blue smoke then clear up when I had Seafoam in the tank. Looks like that's largely gone now and I have a fresh half tank in there now so hopefully it'll all sort itself out and that the seafoam didn't nuke the O2 sensors in the process.

Other than that, it seems to run OK. Still no change in the fuel trims, unfortunately and 11 miles since code reset. I'm suspecting it needs more miles driven to settle out.

However the P0300 came back, but I suspect that is from dropping too low to idle properly and may clear out eventually as the idle improves over time.
C

You aren't going to believe this, no the car still idles like shit. I'm beginning to think the Sea Foam messed with my o2 sensors, the sensor 1 most likely (the one in the exhaust manifold) and see what happens.

All this driving has me doing the brake/gas foot dance and at times the transmission (automatic) slams into gear and that certainly NOT good for it.

Anyway, this is why it's best that auto parts stores hire guys that at least SOME knowledge of cars as this little dipshit I talked to at one Autozone displayed. I tried to explain what's going on and what I've done, saying my car is a 2003 Mazda Protege 5, I've replaced the MAF, the COILS, and explained what it was doing prior to a timing belt replacement etc and even said STFT/LTFT weren't changing out of 0.0% etc and he asked (rightfully) did I do a recent tuneup, yes, coils, plugs and wires and when and he STILL hag the gall to ask about cap and rotor...

I didn't say it but I should have ripped in the little shit for asking such a stupid question because all I described to him indicated NO distributor (coils, you know) and pretty much all cars since at least 1989 are distributorless these days.

So am wondering if the seafoam through the gas killed at least one of the sensors (voltages do still vary, but not the actual reading themselves) and see what happens? I will unplug the front one at the exhaust manifold and see how the car performs and who knows when they were last replaced if ever anyway, though at 188K miles, they would've likely been replaced at least once over time to be honest, but when is the next question.
P

I think you should focus on your IAC.

Your car is only a problem when it's trying to idle.

Edit: I've also poured half a can in the brake booster vacuum line about 4-5 times.

Your IAC could easily misbehave without throwing a code.

The one code only covers the electrical circuit and the other two won't throw until the RPM's are high or low for 14 consecutive seconds.

When I removed my IAC from my parts car, I stripped one of the screw heads (I was being lazy) so I drilled it out.

Once the screw head was off and the IAC removed, I could almost unscrew the stud with my fingers.

It was like 95% of cracking it loose was on the screw head.

You can see how much thread there is to grab on to. (the darker brown threads).

That stud should be easy for you to remove. 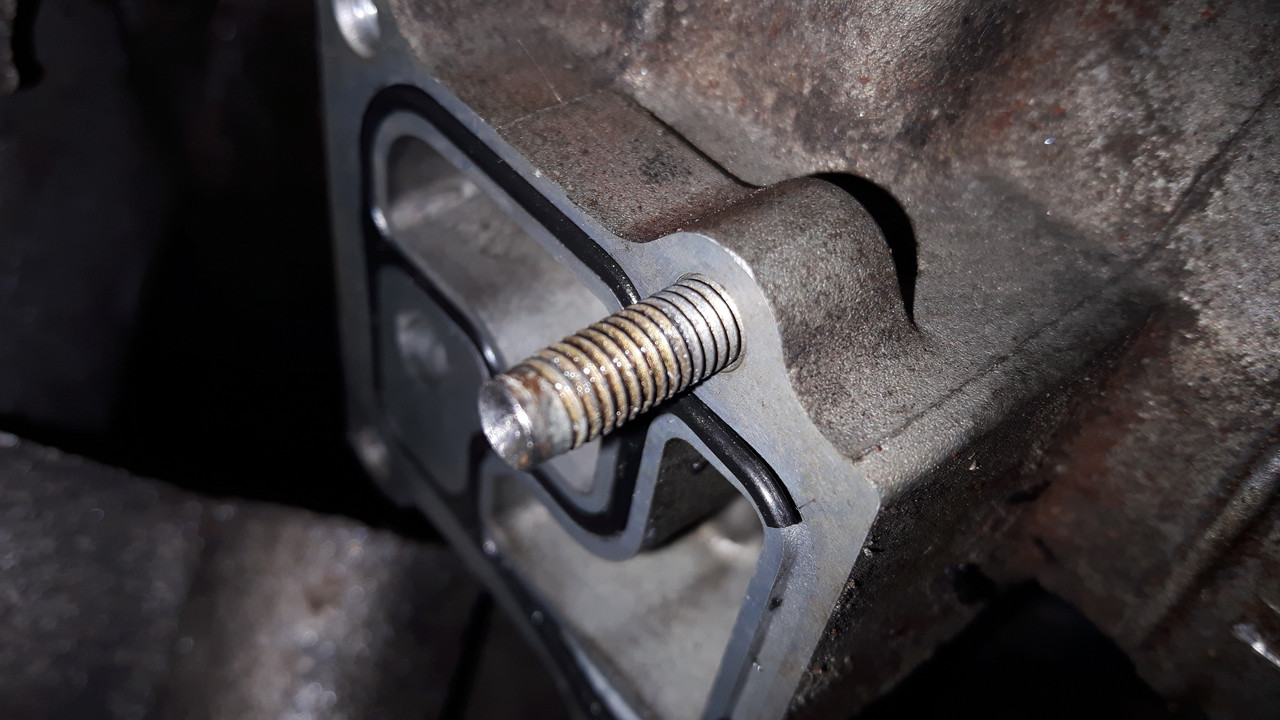 Does the fuel trims not fluctuating have anything to do with the IAC? If not then it's still the O2 sensors. I would not be too surprised if the IAC is bad, but could at least the upstream O2 sensor be bad also?
P

I don't know about the fuel trims, but the O2 sensors have codes that should cover them.

When an O2 sensor gets old, it slows down and at a certain threshold, it should throw a code.

I would suspect that you would throw a code before you would experience the issue you have.

I would suspect that the random misfire and even the MAF sensor low could be caused by an extremely low idle.
C

I think so too, as it drops to about 600 rpm and lower and the idle does get lumpy then, but remains mostly fine down to that low and it can barely keep idle when the tranny is in gear if it doesn't conk out, and this conking out is also when not in gear, more so when not warmed up but still does it when hot too.
C

Went out this morning to see if unplugging the upstream O2 sensor would change things, no, nothing as it's stuck in open loop fault.

Car won't stay running upon initial start up, gotta keep the throttle pushed in for a few before it'll idle on its own.

Only problem with the upstream O2 sensor is where it's located and the plug too. The sensor is mounted in the exhaust manifold and it gets super hot, as is the parts of the motor down where the plug is and it's a bitch to disconnect, but I got it.

I'll try spraying the MAF and hope it gives better air flow readings and go get the impact driver and try taking off the IAC valve to clean it and see if that works, outside of perhaps a bad sensor (voltages do adjust for both IIRC) just that the STFT are not shifting as they should.

I think once I can get this damned car out of open loop fault, I'll be heading in the right direction.
C

After getting an impact driver, got it at Advanced Auto for $22.99 and it eventually did the trick several thwacks with the hammer and twisting ultimately broke it loose but it's too far gone to reuse.

Fortunately, the gasket remains intact so reused just cleaned things up as best I could before reassembly.

Car runs much smoother, but still can't idle worth squat, but since the battery was unplugged for a while, it'll need to relearn. Car won't go out of open loop, idle it's at fault, when I rev up, it goes in to OL-Drive so a change or a good thing to see. I think it was doing it before, just didn't see exactly what it was doing.

Fuel trims are still non changing, MAF is still showing a low air mass, but is that true for just idle?

I'm also wondering if I'm actually off a tooth. Timing advance I believe at idle for Cyl 1 is 10.0* and if so, will need to rectify later in the week due to my work schedule.

Once I got it all back together, the car fired up right way and the money light went out, but came right back on for P0102 but random misfires P0300 didn't show, a feel at the tailpipe felt even pulses so no misfires that I can detect.

Progress and just drive it until it relearns and see if things improve? If so, for how long before that should be expected to return to normal?
P

It takes about 100 miles of driving for the car to fully relearn. It gets progressively better.

It needs to learn how to idle under different conditions, like when it first warms up and when it's fully hot.
Give it lots of practice idling.