Before grinding any screws, I would use an impact driver. You can pick one up at harbor freight for about 10 bucks and they pretty much always work.
P

pb4ugotobed said:
Before grinding any screws, I would use an impact driver. You can pick one up at harbor freight for about 10 bucks and they pretty much always work.
Click to expand...

I don't think there's any room to get in there with an impact driver.
P

pcb said:
I don't think there's any room to get in there with an impact driver.
Click to expand...

And get the brand name Vise-Grips by Irwin.
All the others are crap. The jaws get sloppy and twist off the screw or nut, especially with the long nose version.
C

Vise Grips, needle nosed did cross my mind, I have a pair, will give those a try. I can get an impact in there, but the issue is, even with the extension for the bit, it does not go in straight enough to get enough bite to that back screw. the left front I can get, the other 3, not so much. To add to the problem is no one makes an official JIS bit/screwdriver anymore, it's a combo JIS/Phillips bit, a compromise, but better than a straight phillips in a JIS screw and I bought some decent looking Dewalt bits, which worked fine on the other screws, including the 2 I've not cracked loose before and it bit in and got then cracked loose to remove with an impact, by a quick blip of the trigger to just crack them loose and I believe I went the rest of the way with the screwdriver, but that was with the throttle body on the sidewalk though, not mounted to the engine.

I have to remove the throttle body again anyway to replace that gasket and it's best to just remove the IAC at that point anyway.

At this point, if I can get the IAC locally, or clean out the current valve (I know it's often a short term proposition) and see if the car runs better, once the new throttle body gasket is in place, then assess if the coils and order those online as they can be wicked cheap from Amazon and just wait for those to appear as they are an easy swap out, unlike the IAC or the EGR valve for that matter.

Nothing's changed, car runs like shit but I can now get it to stay idling while at a light, as long as I pop the transmission into neutral, otherwise once at temp, more or less, it'll just die right off while in gear (automatic) and the MIL is flashing still, or was as of yesterday coming home from work.

Just so you all know, not driving the car far, I'm usually less than 10 minutes from work and with the occasional stop at the store (yesterday to the credit union to deal with my debit card, then to the store) but all driving is close by.
Last edited: Aug 28, 2019
P

This is what I meant by impact driver.
https://www.lowes.com/pd/craftsman-...zsyA3cnpLywlT5OofVhoCPvEQAvD_BwE&gclsrc=aw.ds

These are the best for removing philips screws, especially ones under the hood that have high likelihood of seizing or stripping.
P

ciddyguy said:
... To add to the problem is no one makes an official JIS bit/screwdriver anymore, it's a combo JIS/Phillips bit, a compromise, but better than a straight phillips in a JIS screw...
Click to expand... 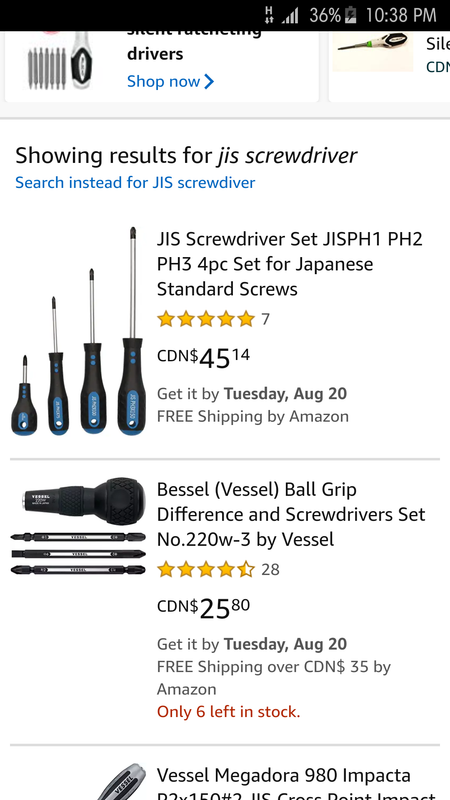 I bought these. They came right from Japan.
I can't read the directions. lol 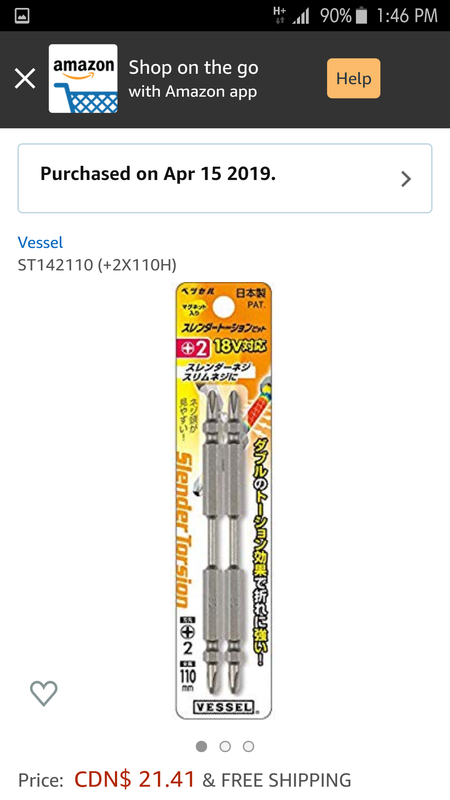 I cut one in half to use in my stubby... 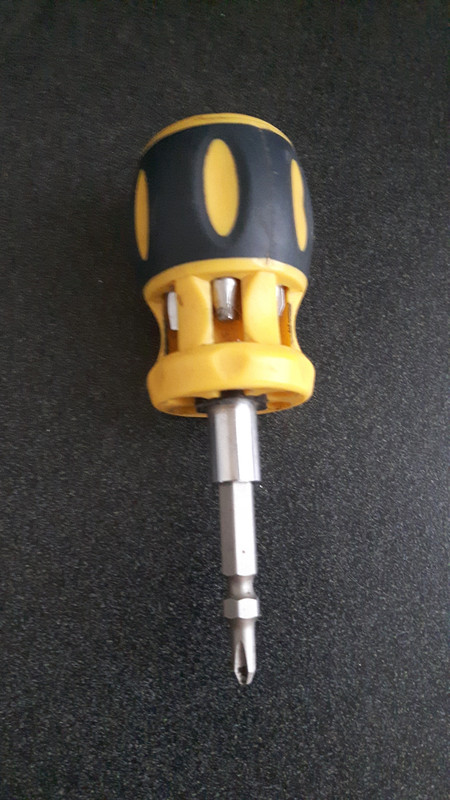 But for you at this point, it's probably too late.
P

If everything goes to crap while trying to remove that last screw, you might be able to just remove the head of the screw then install the new or cleaned IAC with just the three remaining screws.
Maybe some RTV silicone on the gasket to help it seal.

PS. I remember one guy that bought a cheap IAC and it didn't work. He noticed the little "jet" or "hole" was a different diameter than the original.
He had to buy an OEM part.

pb4ugotobed said:
This is what I meant by impact driver.
https://www.lowes.com/pd/craftsman-...zsyA3cnpLywlT5OofVhoCPvEQAvD_BwE&gclsrc=aw.ds
Click to expand...

that's the problem is NO ONE makes an official JIS driver or bit, not even Vessel does anymore even though some advertise it as a JIS bit/driver, it's really a JIS/Phillips bit/driver.

I'll look into the impact driver shown at Lowes, at $19.99 US, it's a good price and may have something a bit better than the old standard Phillips bit but who knows though.
P

ciddyguy said:
I'll look into the impact driver shown at Lowes, at $19.99 US, it's a good price and may have something a bit better than the old standard Phillips bit but who knows though.
Click to expand...

With the impact driver, philips/JIS does not matter. You can take a completely stripped and rounded out screw out with one of those because when you beat it with a hammer, it forces its bit into the screw head. So even if there is no "philips" left, it will makes its own while it spins to break it loose. Then you simply unsrew it the rest of the way by hand.

Not one of those tools you use all the time, but it's definitely one of those that when you DO need it, it's worth its weight in gold. I couldn't ever imagine myself NOT having one!

And if you get a set of twist sockets, it's the perfect combo for rusted and rounded off nuts and bolt heads too.
N

This page has a great write up on it:
http://rtstools.com/jis-vs-phillips-screwdrivers-and-where-to-buy-a-jis-screwdriver/

Just DO NOT Click through on the other pages. I clicked through on the tool recommendations and somehow I now have $500 in tools in my Amazon shopping cart that I "need".
Last edited: Aug 29, 2019
P

This page has a great write up on it:
http://rtstools.com/jis-vs-phillips-screwdrivers-and-where-to-buy-a-jis-screwdriver/
Click to expand...

Huh, I guess my bits are the compromised version then.

I wonder if the Japanese changed their screw heads then so that the new bits fit perfect, and if not why can't you buy the proper screwdriver ?
C

As for the JIS standard, wish I knew if Japan has modified their screws now because of this.

My theory is since it was ONLY adopted in Japan, but nowhere else, it's been quietly dropped by the Japanese over time.

Anyway, as long as it's dry and NOT raining (it was raining late yesterday and into the evening at least), I'll be under da hood on my flivermobile, trying to get it to run at least halfway decently today.
C

Decided NOT to get the IAC for now and just clean and put back, but did decide to get the coils anyway.

I was going to walk up to the parts store but ran into a neighbor just down the street from my house and he had to get the ball joints himself so he can replace them, via DIY and offered to take me up as well and we did just that.

I got the better of the two O'Reilly's had available, but it took 2 different stores to get both as each had just one. Total cost was $74 and change, not bad and has a lifetime replacement warranty.

O'Reilley's did not have the gasket for the IAC itself as they don't even show it as an individual gasket, but likely comes in their gasket kit though if one is actually needed.

So my plan is once I get that chowdered screw out, remove, clean and put back on using original gasket, if there is one and hope it's still OK and later can replace as needed, all that while I replace the throttle body gasket and do the IAC while on the sidewalk.

Coils are easily enough replaced and just decided to replace those as it's probably gonna help.

I'll start the car once the throttle body and IAC are installed and then clear the codes and see how the car performs before I swap the coils out.
P

ciddyguy said:
So my plan is once I get that chowdered screw out, remove, clean and put back on using original gasket, if there is one and hope it's still OK and later can replace as needed, ..
Click to expand...

I took a picture of my parts engine where the IAC attaches to the intake.

You can see where a piece of the gasket broke off when I removed it.

There's a groove that holds the gasket and the gasket looks like a critical part.

You might be able to use RTV silicone but it really needs a good seal. 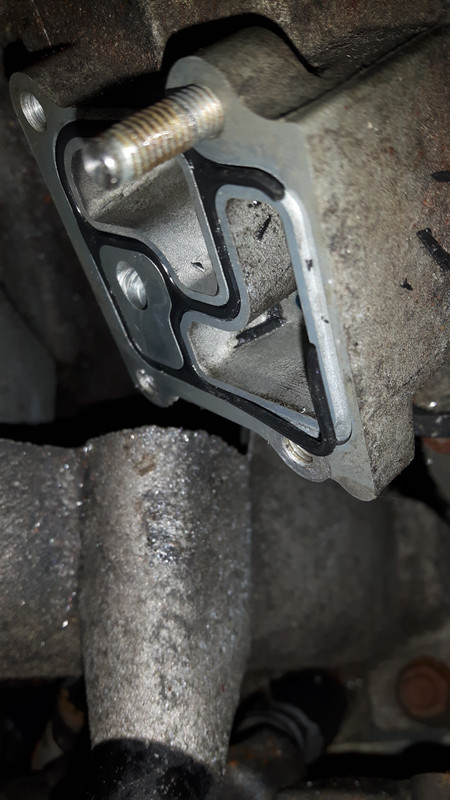 This is the gasket surface of the IAC. 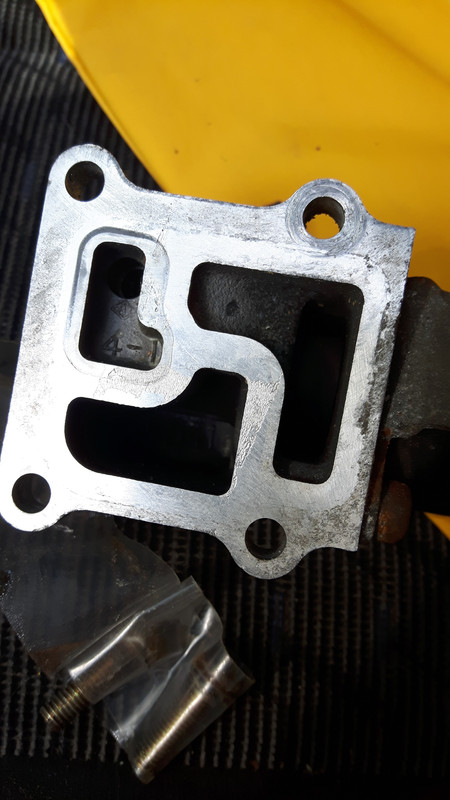 Yeah, I see that, though I never got the IAC out of mine, need to get that impact driver to bang into the head to get it out, it's reefed in bad enough that the vise grips (needle nosed) didn't budge it one bit so left it as is but got the new gasket on the throttle body and stuff plugged back in and hoses reconnected and the whole thing tightened down.

Then cranked it up, seems to idle a little bit better, though not perfect, that is until I put it in gear, then the idle dives and quits but in neutral the idle slowly dropped as it warmed up, I noticed a very, very subtle hiccuping so shut down and replaced both coils with the ones I already bought this morning, idle improved greatly. Much smoother, even at high idle.

That said, I can't keep it idling most of the time while the transmission is in gear, it just conks out, but in neutral, it idles high and sometimes wavers up and down.

I'm assuming this is all part and parcel of the relearning process and looking at the live data, the fuel trims do not budge, at all from 0.0%, both short term and long term, and never budged when I went on a small trip and a couple of errands on my way back. remained the same, only code now is the low air flow at terminal A, MAF but the money light is not flashing anymore so obviously I must got rid of the misfires so that's good.

Now to get the idle to work, unless the IAC is toast, but I'd see a code for that won't I?
Click to expand...

Not necessarily.
It looks like there are three codes for the IAC.

If it were me, I'd grind off the screw head and clean/replace the IAC.
Please log in or register to reply here.