Hey guys,
In case anyone else has this problem, here's what I found on the 2012 Mazda 5. Small evap leak P0442 can be several different things starting with a loose fuel cap.

In my case, it turned out to be the canister vent solenoid which is located at the rear of the car, directly above the center jacking point. You'll see the charcoal canister up there too. Just two nuts and two hoses to get the solenoid off. There is a hole in the jacking plate you can put a socket extension through, and I got the second off with a socket swivel.

The way I tested the old one was to remove it and apply 12v to the connectors. Although it clicked really well, I found I could blow a tiny amount of air through it in the closed position, so I crossed my fingers that this was the problem and replaced it. 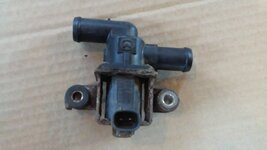 Out of curiosity, what's the mileage in your car?
D

Hi Roboto,
I have 109k on my 2012. From what I understand, P0442 could be anything in the evap system: loose/faulty gas cap, purge solenoid, vent solenoid, charcoal canister, vacuum leak in any of the many hoses.

Definitely start by making sure your gas cap is tight, that costs nothing! I think the code will self-clear after a few drive cycles if that was the fix. Or if you have a code reader, tighten the cap and clear the code and see if it returns.

I was surfing yesterday and saw this post. Then I got the exact same code this morning on the way to work so it's time to join the game I guess.... Anyway, hunting a EVAP code is always painful.....

Mine is at 29k and couple weeks ago I hit lightly a stopper curb to my exhaust tip on a parking spot. Hopefully this doesn't cause any damage to the EVAP Component. Only damage I can see is a dent on the exhaust tip. I will go underneath and check during weekend.
Last edited: May 2, 2019
J

kashun842 said:
I was surfing yesterday and saw this post. Then I got the exact same code this morning on the way to work so it's time to join the game I guess.... Anyway, hunting a EVAP code is always painful.....

Mine is at 29k and couple weeks ago I hit lightly a stopper curb to my exhaust tip on a parking spot. Hopefully this doesn't cause any damage to the EVAP Component. Only damage I can see is a dent on the exhaust tip. I will go underneath and check during weekend.
Click to expand...

Ha, add me to this list! Mine is a 2013 with 70,000 kms on it and I got this code a week ago. If I have time I'll try to pull the solenoid out this weekend and see what I can see. I've had luck in the past disassembling the solenoid and cleaning the sealing surfaces inside to fix leaks or sticking closed, so maybe this will work.

I'll report back if I have any luck.
J

So I pulled my vent solenoid off yesterday and like @dougsey reported, I could force a little bit of air through it even when closed.

I opened mine up and cleaned the sealing surfaces and also put a little grease on the end of the piston inside. When I put it back together, it seems to hold air a bit better, but still doesn't seal completely. @dougsey did you try the same test with your new solenoid to see if it's airtight when activated?

I haven't driven mine much since then, only a couple of short trips, but so far no code set or pending.

I also noticed that one of the two hoses to the solenoid had no clamp on it, not sure if this is normal. Maybe this is the low pressure/atmospheric side?
D

Hi JM,
Sadly, I did not test the new part for comparison. I thought of that after I installed it but of course, too late. I tried cleaning the old one by spraying WD-40 into it but it didn't help. Carb cleaner might be a better choice?

Mine is also missing a hose clamp on one side... I agree with your reasoning on that.

It will be interesting to see if yours remains code free after a few drive cycles.
J

Well finally my CEL did come back on, although I had checked the codes after the first 4 or 5 drives and it seemed like it wasn't coming back. Maybe the little bit of grease I put on the valve just dried out and it started to leak again.

@Dougsey, has yours stayed fixed with the replacement solenoid? I'm a bit hesitant to just shotgun parts, but I feel like my chances are pretty good given how many of us had the problem at similar age/mileages.
D

No issues since replacing the vent solenoid JM!
R

Hello all, I have a minor update on my own problem.

Long version: I looked under the car for the purge solenoid valve (as per the original post in this thread). I also noticed like you guys, that one of the two hoses had no clamp on it. The screws holding it in place were rusted. I applied WD40 (to remove it later). I also cleaned the Mass Air flow Sensor (MAF), and the throttle body, at the same time that I cleared the code.

This time, I cleared the code again, but probably it will come back.

I may need to sell the car soon, so I am on the fence about spending any money on it.


ROBOTO said:
Thanks for posting!

Out of curiosity, what's the mileage in your car?
Click to expand...

dougsey said:
No issues since replacing the vent solenoid JM!
Click to expand...

Hey Dougsey, just to follow up from the other thread about removing the rear jack plate, no issues at all. Much easier to deal with the plate off.

Just need some PB Blaster and let the four bolts soak for a couple hours, 14mm impact socket for the jack plate bolts, 10mm deep socket for two bolts on value, screwdriver to separate clip, and a wrench to pop off the clamp.

Thanks again for your assistance!

Hi walks, great job and thanks for the update!
P

Just got the p0442 on my 2014 mazda5 at 54k. Judging by the common trend I guess I'll be replacing the canister vent solenoid. Thanks for all the good info guys.


Walks did replacing the solenoid fix your issue as well?
W

@pd102030 ... So far so good. To be honest the weather has been so good lately I've put more miles on my bike than on the Mazda

If the code comes back I'll post again. Our car has about the same mileage. Anyways, if you can take the jack plate off it will make your life a lot easier.
M

In my case, I just got p0445 (gross or large leak). Same part was completely stuck open. Some WD40 and hitting with a hammer got it moving normally.
Code returned as p0442. Indeed, just like some of you, I was able to blow slightly trough it.

I was lucky enough to score an already replaced one from a Mazda 2 in a pick n' pull for 10$ (yes, Mazda 2 2011+ use exactly the same part).
Please log in or register to reply here.