Only time I've ever had squirrels chilling near by me was when I was working on my car. I can't remember what I was doing before a meet, but I heard some weird chattering from behind and above me as I was digging around in my engine bay. Sure enough, some squirrel was keeping an eye on me behind the ledge of my roof. He just kept chattering over and over again.

Hey, uh, to help me out with my EVAP issues...think you could "unbuild" your EVAP system? Would come in handy for reference!
P

Riot_Polizei said:
Hey, uh, to help me out with my EVAP issues...think you could "unbuild" your EVAP system? Would come in handy for reference!
Click to expand...

I'll do that tomorrow if I remember!

I got to my EVAP system today.
There were some weird plants in the way that I had to work around. Lol

I got the two-way valve and CDCV off. 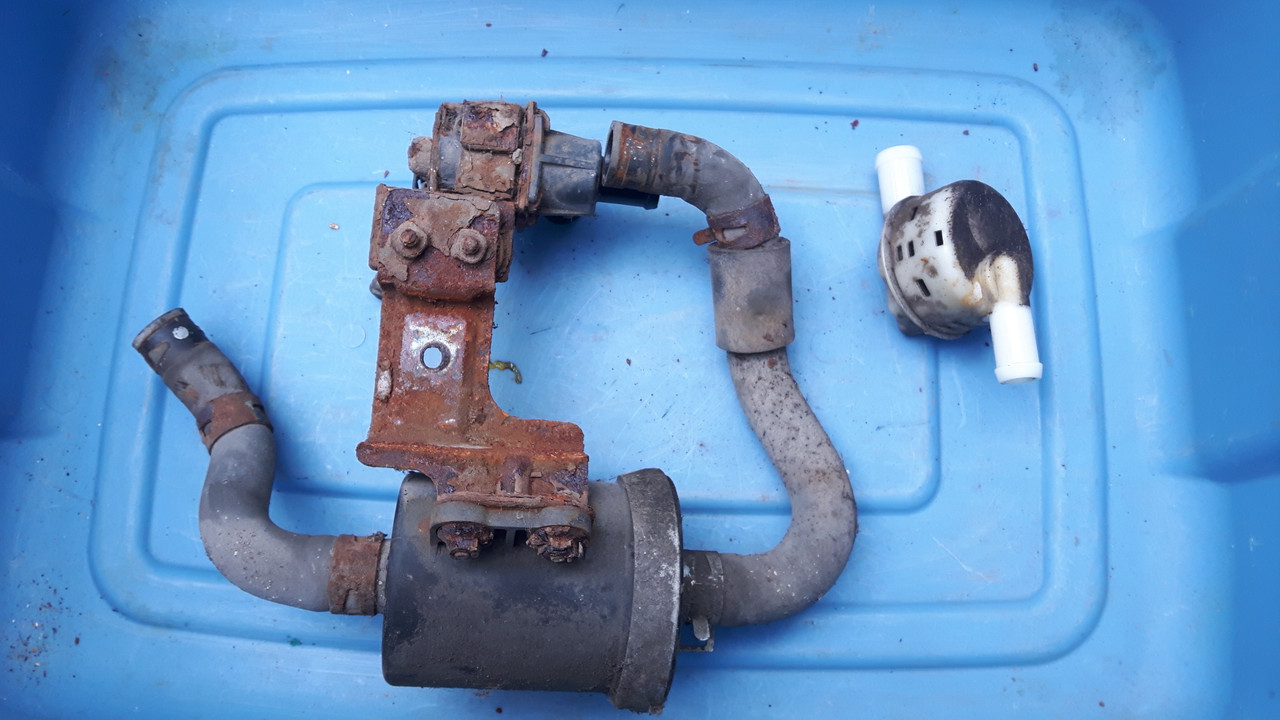 The two-way valve was full of crap. 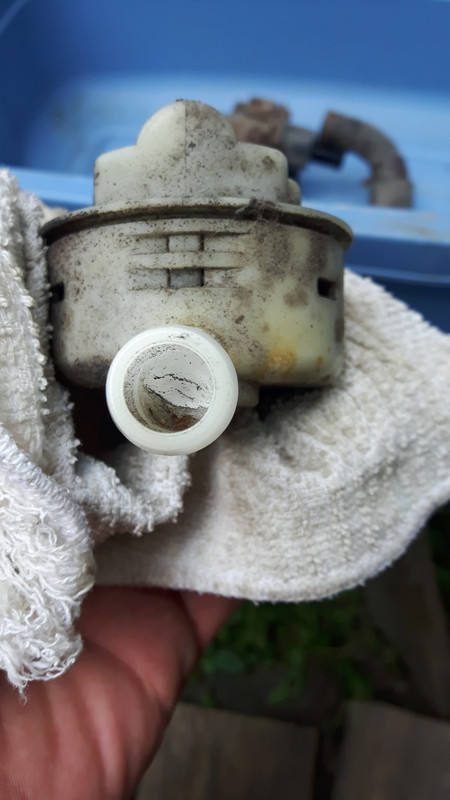 It did seem to operate properly though.

I could blow and suck through the big end then when I plugged the smaller end I could only blow.

The small end I could only blow through and couldn't suck air from.

You don't need an SST to put air through it, you just blow through it. (Just don't spend the whole day huffing on it though, it may have been full of gas. lol)

Then I managed to get it apart. 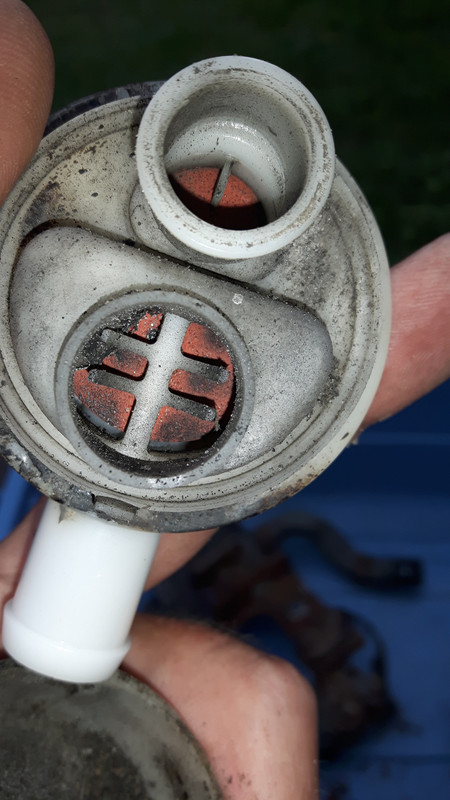 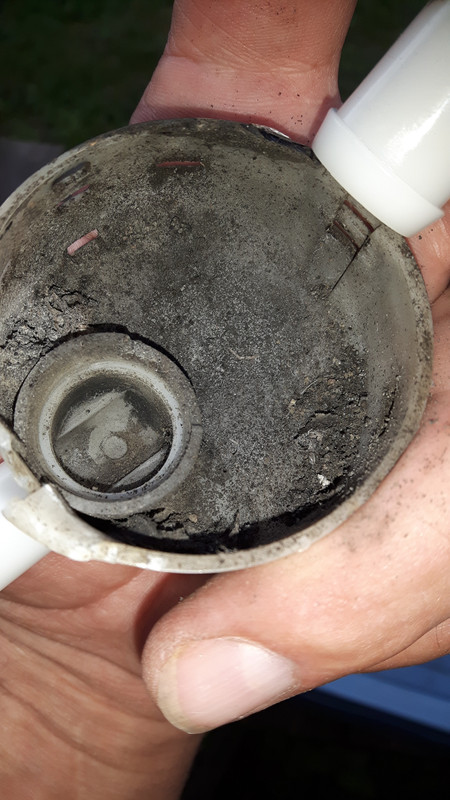 I actually managed to get it back together without breaking it.

I put power to it and it didn't work. It was trying but it didn't move so I took it apart too.

What a rusty piece of crap. 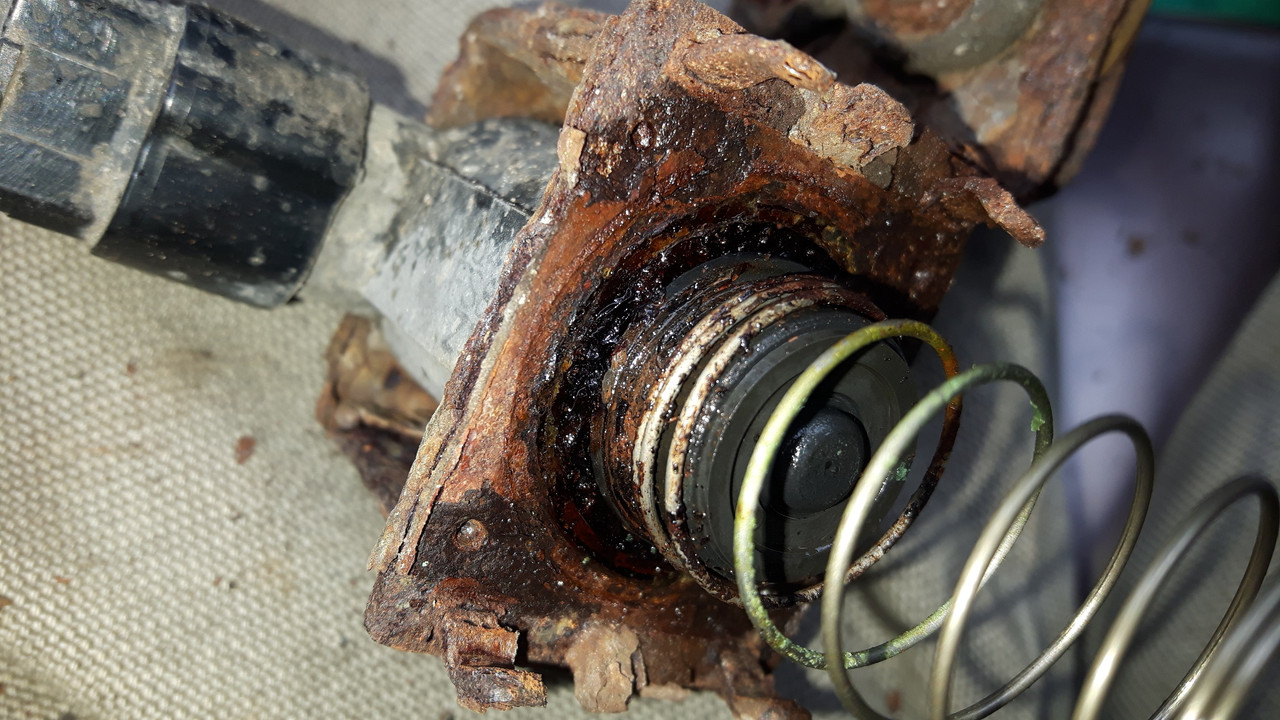 The plunger was completely rusted and seized.
I tried to pull and rotate it with pliers but it wouldn't budge.

Then I thought I'd pull apart the connector.
I just cut the wire when I removed it because I couldn't see how the clip works.

You just squeeze it with pliers like this to release the lock, then pull.

It looks pretty good in there. The seal did its job. I forgot to take a picture before I took things apart so I took a picture of my DD. 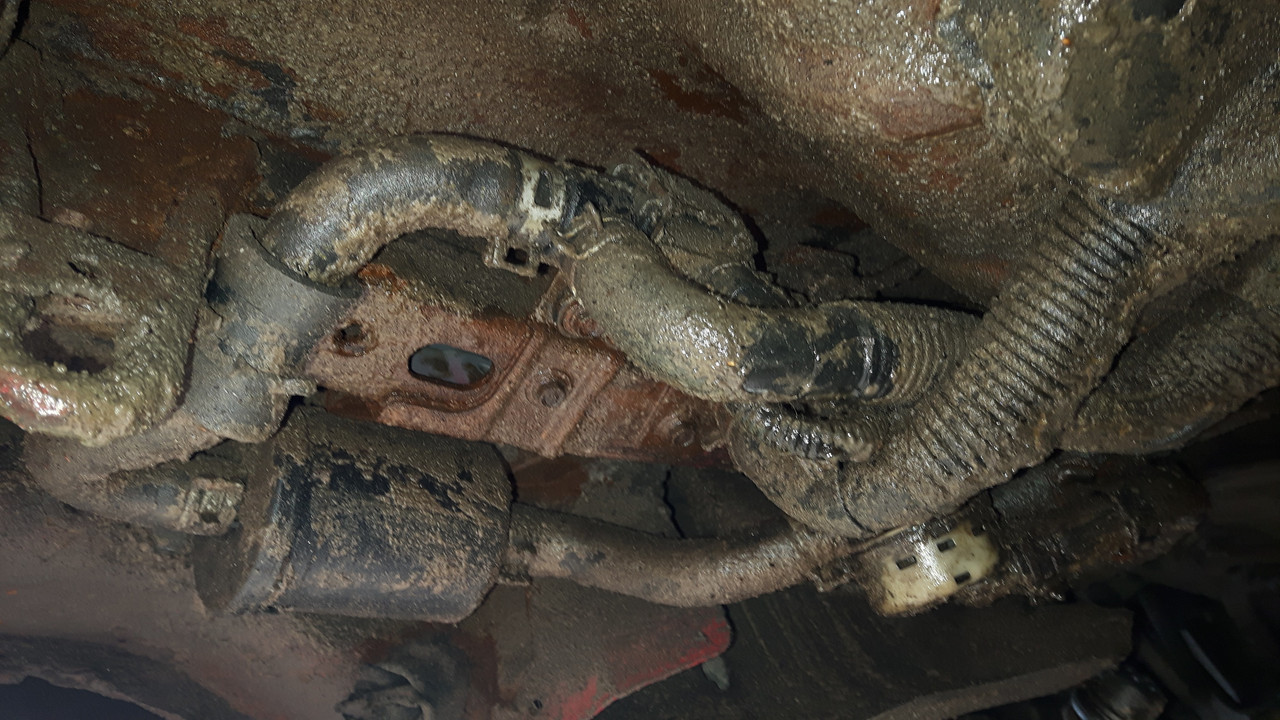 I'm almost positive you can simply remove this vent tube and blow through both parts to check for a blockage. 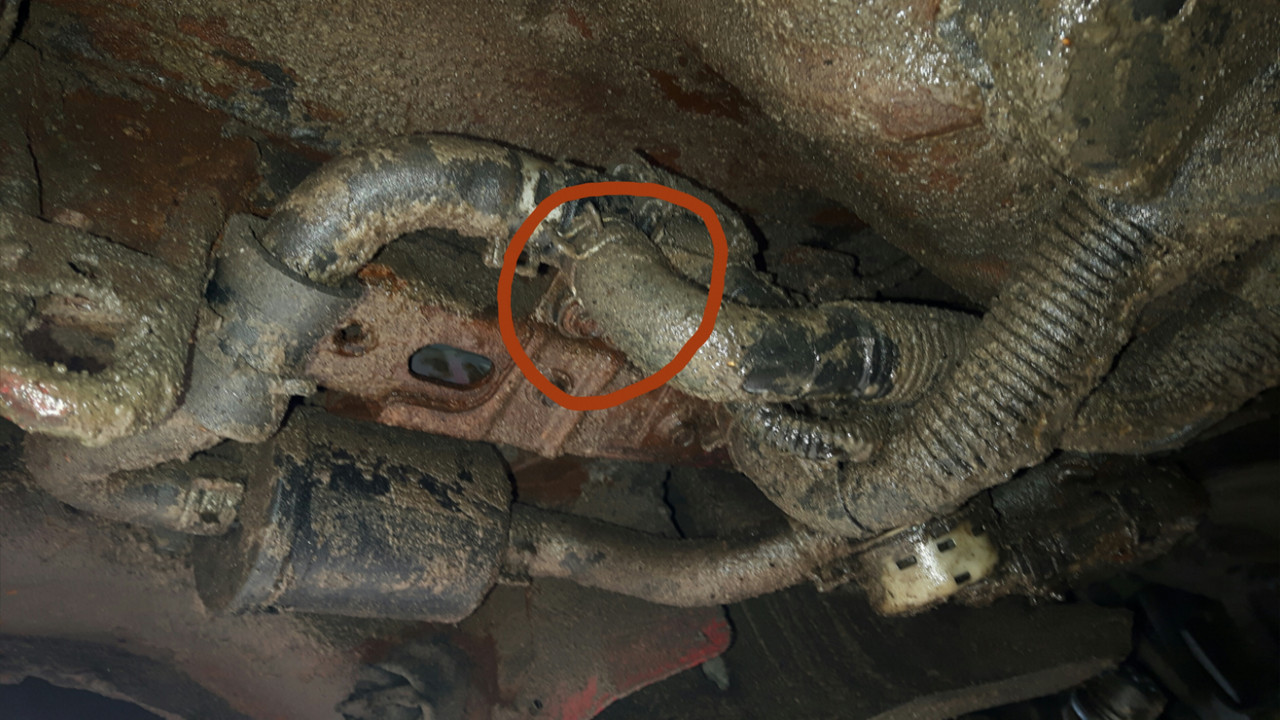 Blowing through the vent tube checks the charcoal canister for blockage.

I did find that the air you blow pressurized the gas tank and it came flowing back out so I did actually blow up my gas tank. lol

There is also an anti-backflow valve in the filler neck that may be stuck, preventing you from filling your tank.

One guy posted that he simply removed his then he could fill his tank again.

Maybe inspect that after you check the other stuff because you have to remove your filler neck to get to the valve.

Good stuff man, I'm about to get a parts car myself unless the seller falls through. 170k, blown motor clean body, 300 shipped to me

Hell yeah! This'll be great for reference. Thanks for continuing to tear apart this P5 so we can learn a thing or two!

I decided to wash my car for the first time in months. It might have been last year? Lol

It doesn't look too bad. The cancer is starting to really show through.

Damn man, your poor doors. Still has a nice shine too it, I feel like yellow paint does not like clearcoat at all
P

STudMUffin1177 said:
Damn man, your poor doors. Still has a nice shine too it, I feel like yellow paint does not like clearcoat at all
Click to expand...

IIRC, yellow P5's aren't clear coated from the factory.
All other colors are clear coated.

I have some clearcoat left on my "wing" lol and I think the bumpers have some too, did they just do the plastics? Did my car get resprayed?
P

All I think I remember is that yellow wasn't clear coated and tended to deteriorate faster.

The plastic parts may be different.

pcb said:
All I think I remember is that yellow wasn't clear coated and tended to deteriorate faster.

The plastic parts may be different.
Click to expand...

No kidding? Technically, light colors like yellows and whites deteriorate more slowly, but that's a weak reason to not apply the clearcoat from the factory. Shame on you, Mazda >:^(
P

Check out my wing, what a frucken mess...

I tried to fix it. It didn't really work out. lol.

I put my winter tires on today and decided to grease my slider pins as well.

I made a grease injector out of a turkey baster from the dollar store. It's for injecting butter into a turkey. lol
It works pretty good but you really have to push hard on the plunger to get the grease out. 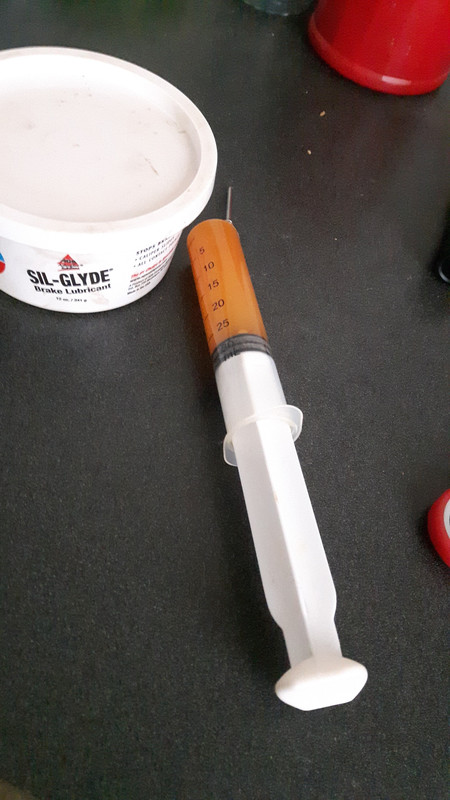 The rear rotors are looking pretty rough so I decide to clean them up a bit. 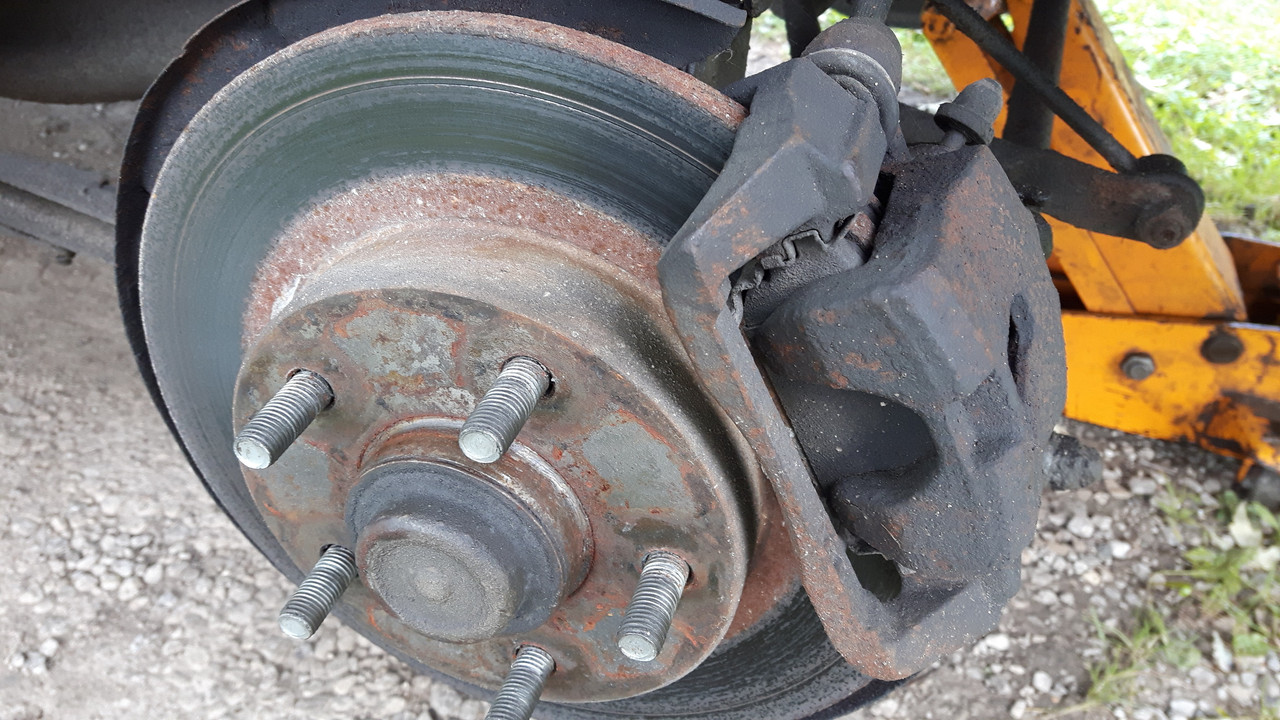 The outer pads are more worn than the inner.
The old grease on the slider pins was all dried up and sticky so I figure the outer pad was dragging.

I'm hoping the new Sil-Glide won't dry out like my old grease. I put a sanding disk on the drill and spun up the rotor with it.
I put my foot on the rotor to slow it down but keep it spinning so I could sand it evenly. I sanded the pads a bit too, to get the grooves off. I flipped the rotor over to sand the other side. 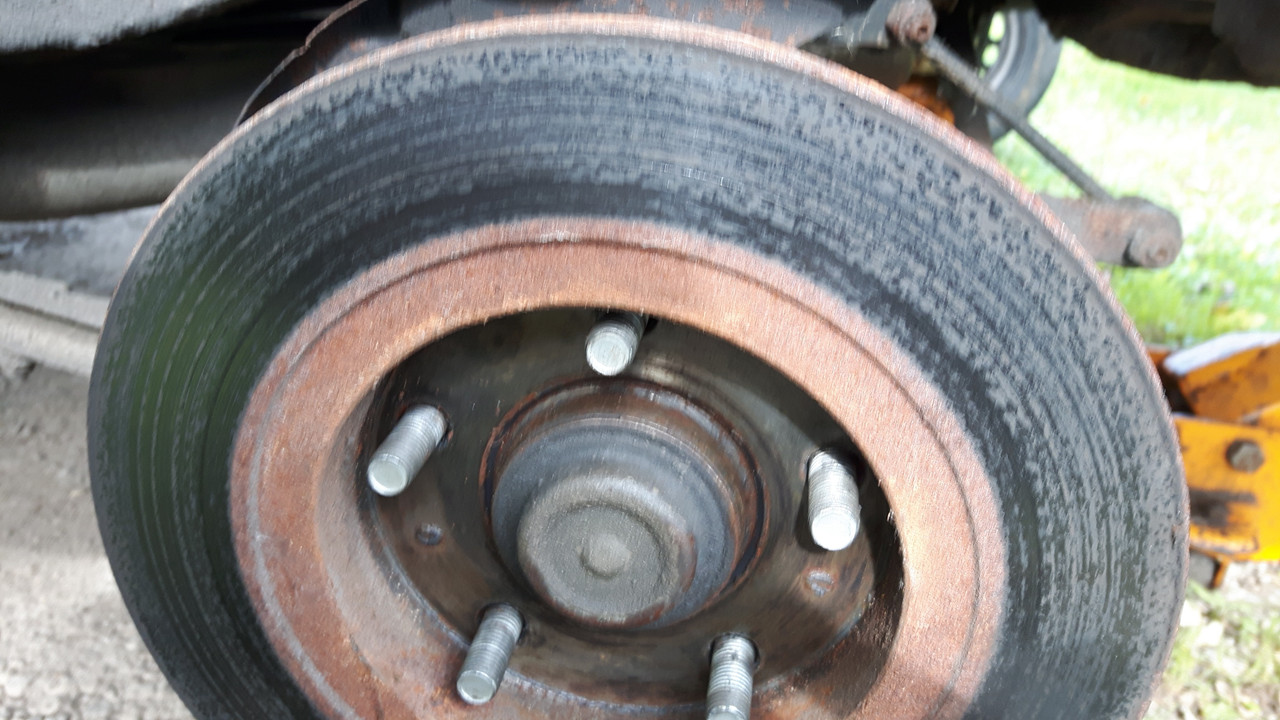 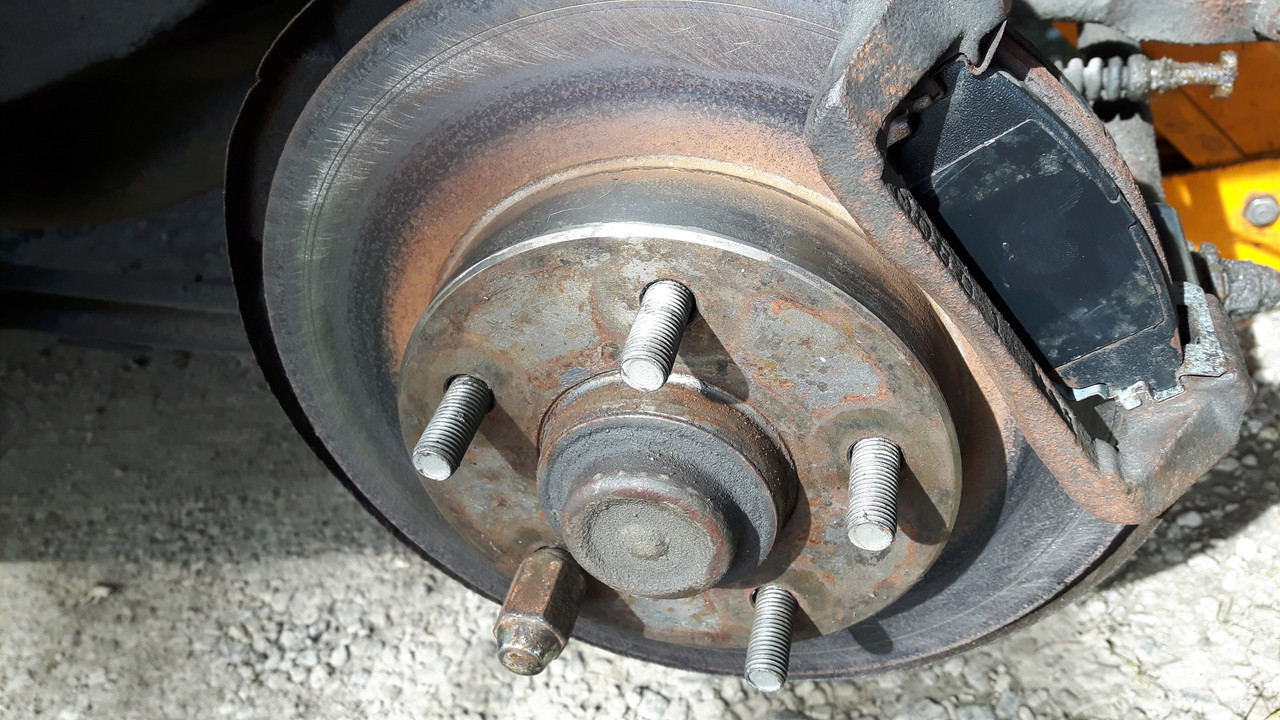 I removed and regreased the slider pin boots and squirted some grease into the piston boot. 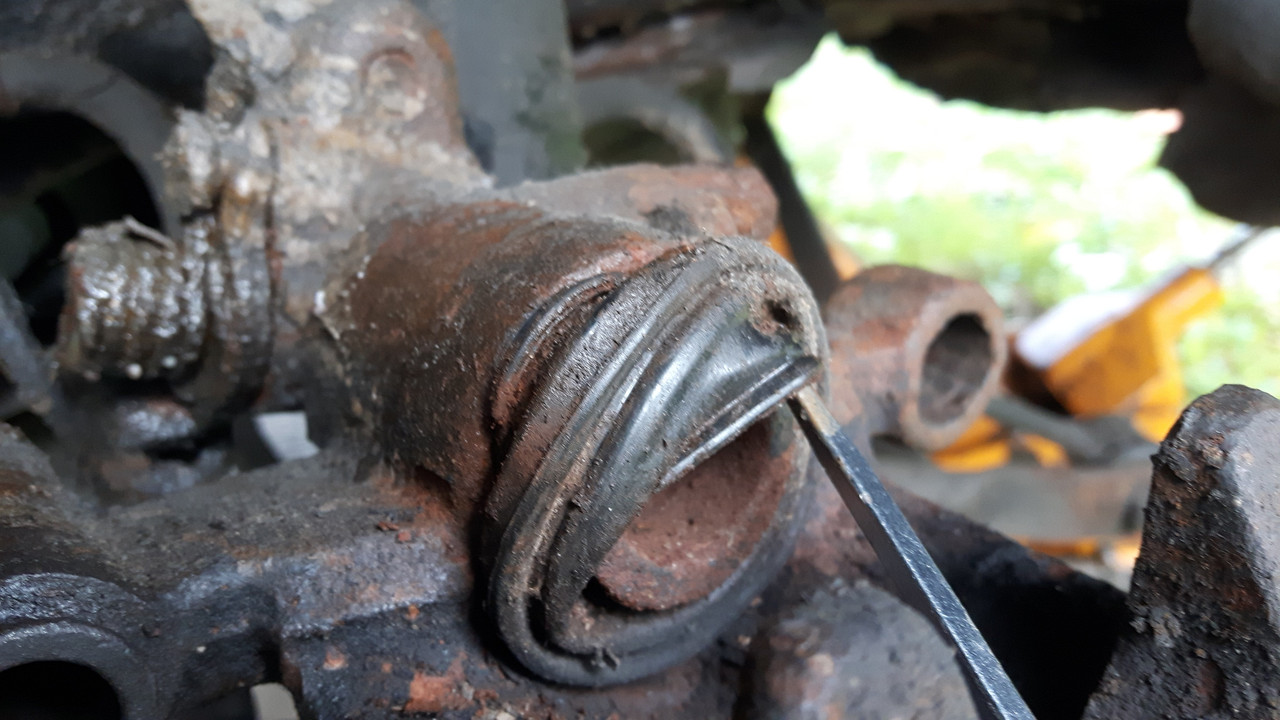 I noticed that a tire weight had fallen off one of my tires.
I scored a weight off my parts car and popped in on. 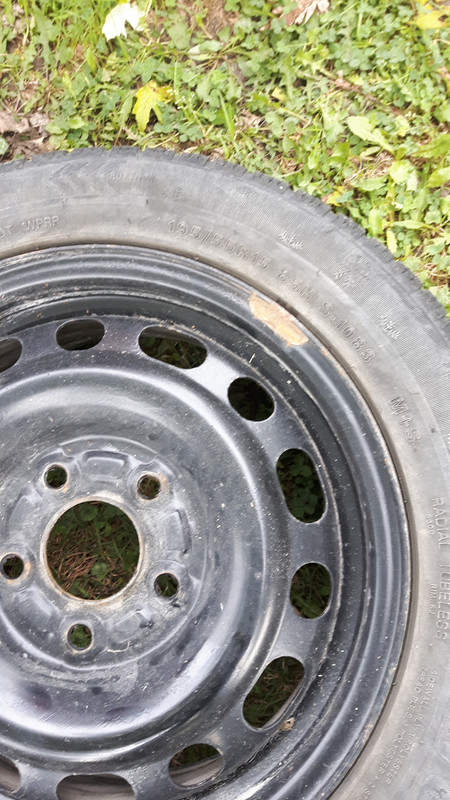 My car's half ready for winter. 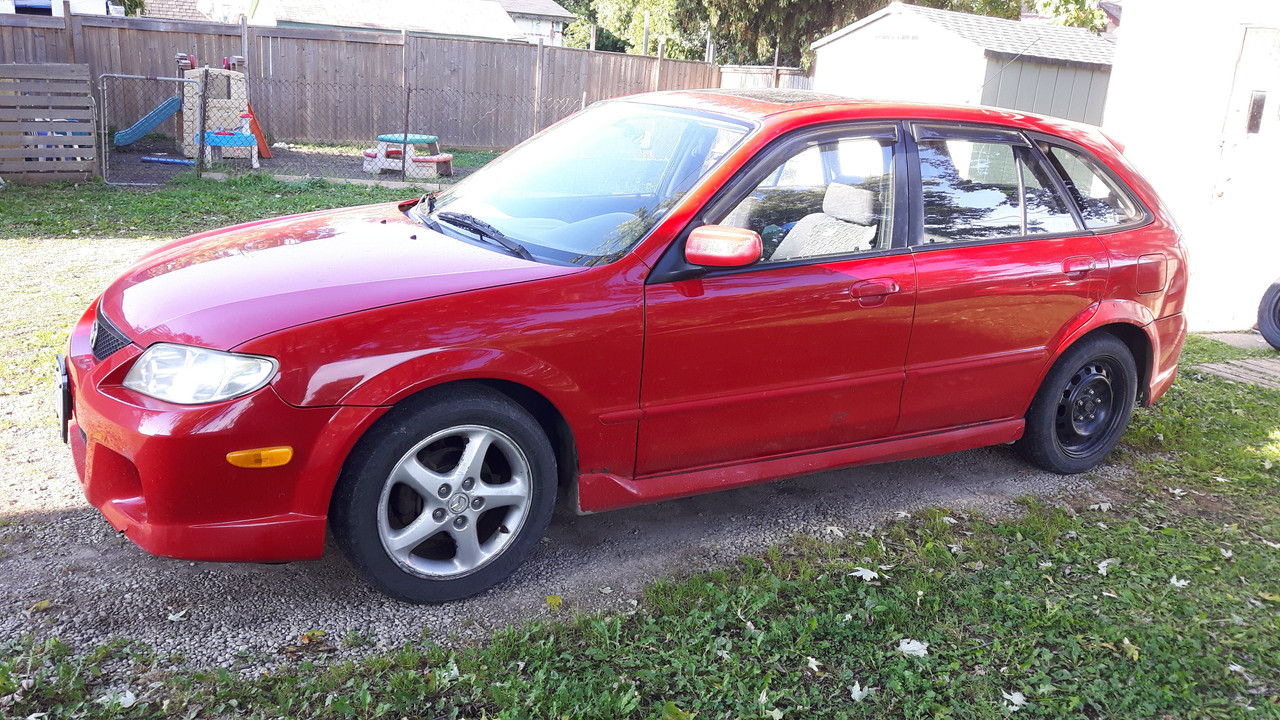 Moderator
That syl glide stuff is awesome. Before I was using something labeled caliper grease that kept drying out every 6 months. Switched to syl glide and it*s been treating me well for over a year at a time. I understand where you live is way colder than me so you get a halfway review lol
P

Yea, it was you that recommended it to me a year or more ago but I couldn't find it here in Canada and eBay wouldn't ship it here.

Finally, I found it online where it shipped from Canada.

I just found this...

I can use my Sil-Glide as a dielectric grease!!

Some grease has metal particals in it to help with conductivity but if you goop a whole bunch on to both terminals and in between, you create a short circuit.

I can also use my Sil-Glide as 'Plumbing Grease'. 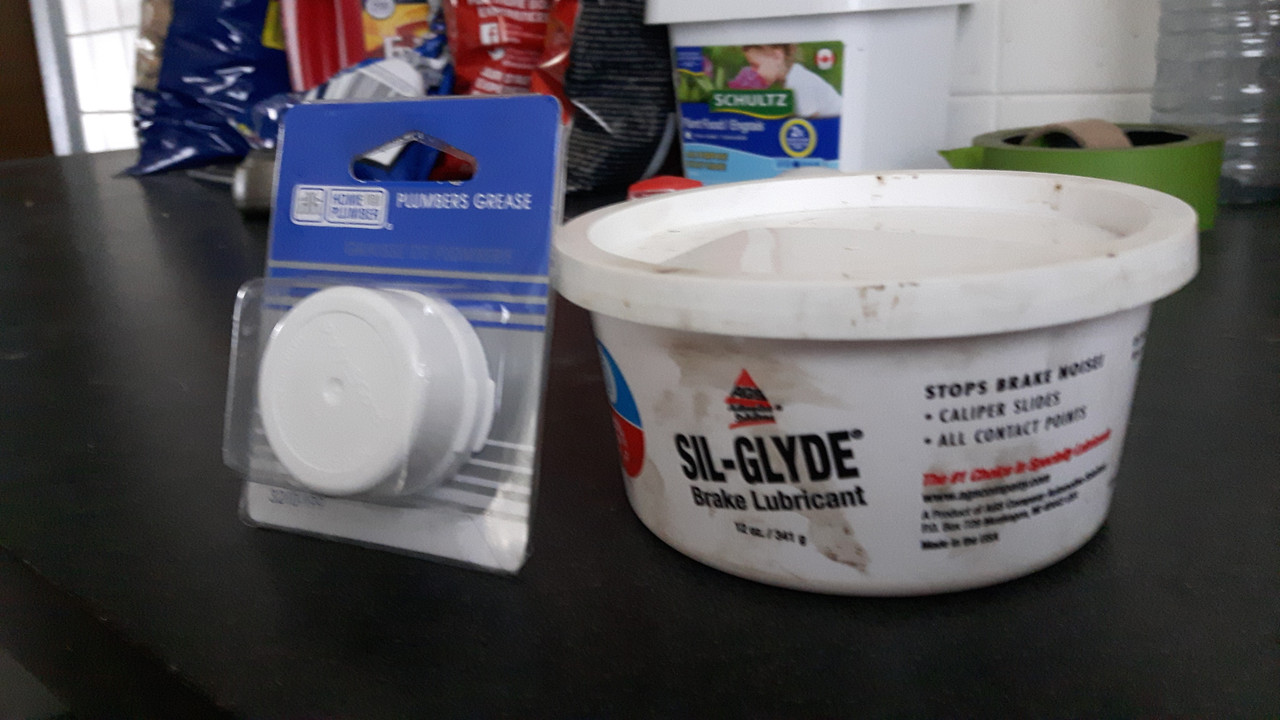 I tested the grease and it has more than 2 M ohms of resistance so it doesn't conduct electricity.

My cat conducts electricity better but she wasn't too keen on being tested. lol

Moderator
Lolol at testing it on your cat. Interesting info indeed!
P

STudMUffin1177 said:
Good stuff man, I'm about to get a parts car myself unless the seller falls through. 170k, blown motor clean body, 300 shipped to me
Click to expand...

I'd be willing to spend $1000 CAD for a rust-free 5-Speed P5 (blown engine as well, $100 more if it's red, I like the red) shipped to my house, but I don't think that's possible?
I haven't really looked into it.
It would probably have to come from Texas or Arizona or something.

There's no such thing as a rust-free P5 around here.
Please log in or register to reply here.
Share:
Link