My new 3/4" 32mm socket arrived today and I managed to get my axle nut off.

But unfortunately, my new axle nuts haven't arrived yet, so I'm still waiting.

pssh. why dont you have spare axle nuts like everyone else (crazy)
P

I was thinking of reusing the old ones or trying to get the ones off the parts car but I finally decided to do it "by the book" and install new ones.

I ended up wasting $110 on sockets and adapters and three weeks waiting for them to arrive all because of one simple but very stupid mistake.

I'm going to go and continue banging my head against the wall until my nuts arrive.

I really hope I don't have to replace the bearings again.

I don't know if they will keep getting louder but I've got about three months before it's too cold outside to work on the car.
P 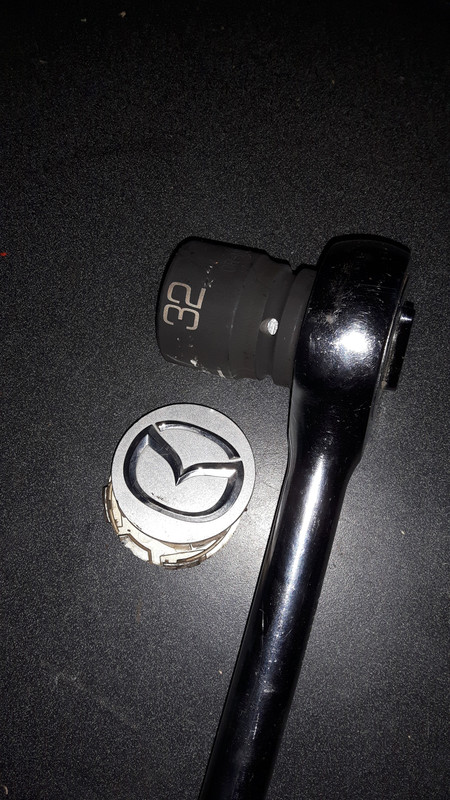 "R" means replace but I'm not replacing the cotter pin.

I'll just use a sledgehammer.
P

Maybe it's time for a fresh new pair of axle nuts.

My old ones have been peened and unpeened more than a few times. 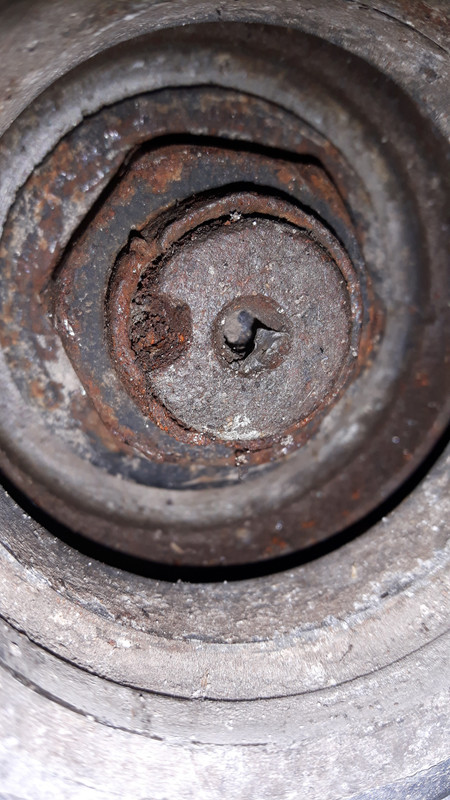 I bet you've got Bulk supplies of WD40
P

I stock up when it's on sale.

Hey man, I would replace the cotter pin, the bearings on my b2200 were brand new and I had to redo the passenger side after 3 months because the used pin sheared off and the axle nut was loosening itself. Ruined my pads, rotor, bearings, and probably my spindle if I hadn't got to it so soon. I just went out and bought a cutter pin set for like 8 bucks and it had probably 80 pins in different sizes. I can't really tell on the diagram and I've never done the bearings on our car but does the pin go right through the axle nut, or is it used somewhere else? If its somewhere else and not on the axle nut I guess it'll probably be fine huh?
P

My 3/4" drive socket has a lot more meat to it.
I guess that's why it costs more.

The 1/2" drive socket probably would have exploded if the adaptor didn't break first. 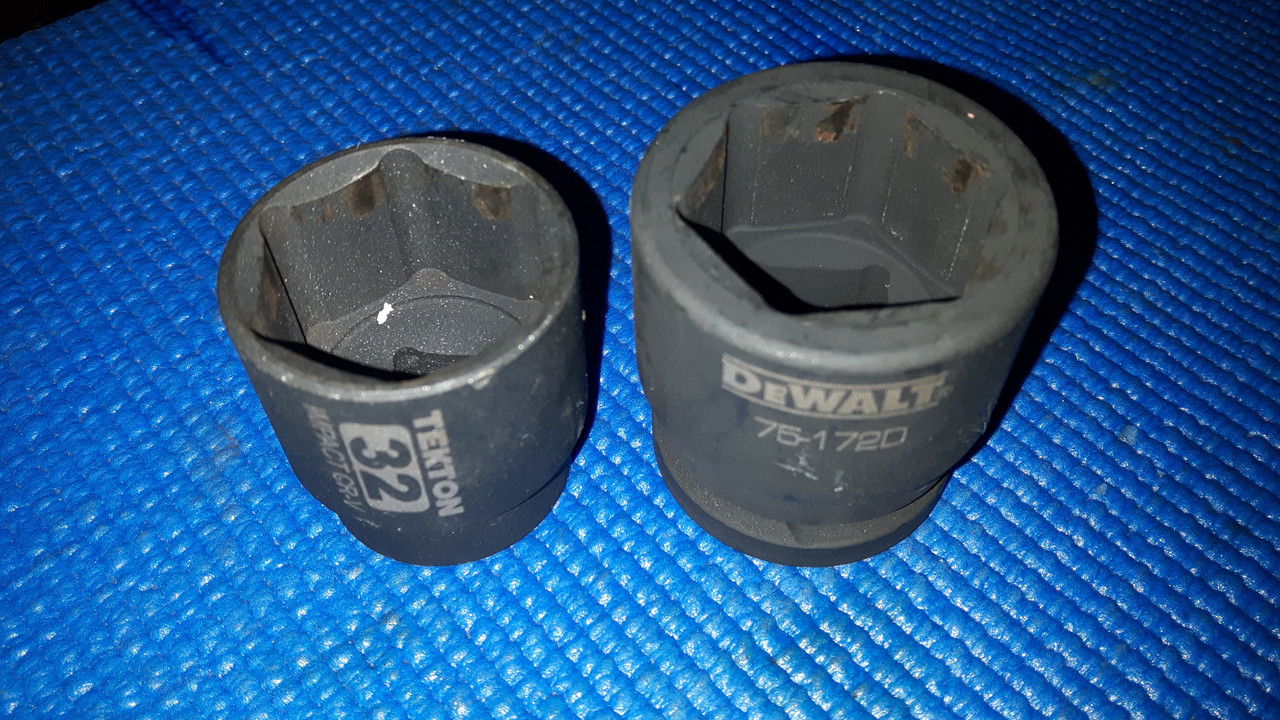 I decided to try to seal up the rusty spot on my roof before water starts dripping on my head. 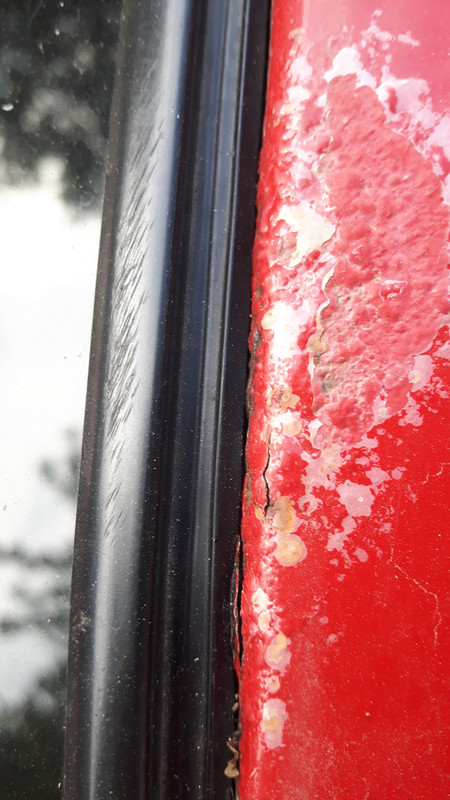 I wiped everything down with acetone and pried back the window seal to clean it up.

Then I put clear silicone on the rust and under the window seal. 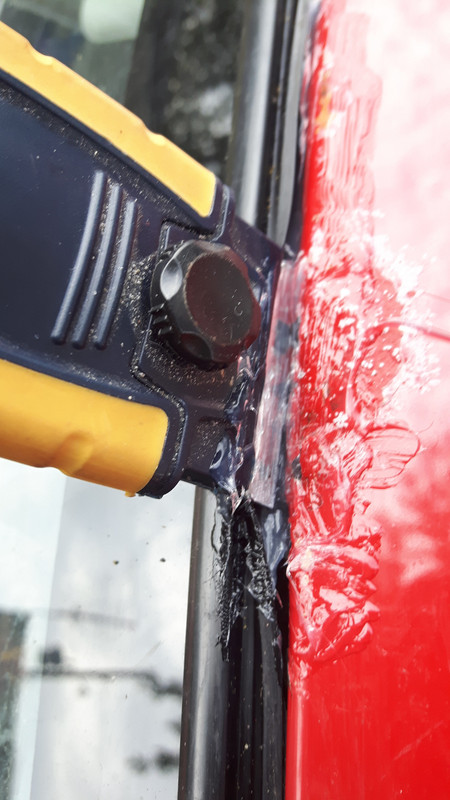 Things went smoothly so I decided to redo the leaky spot that I fixed before. 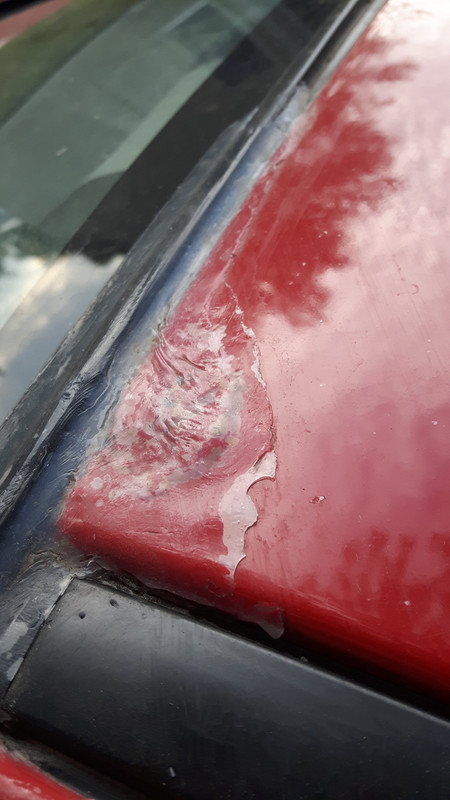 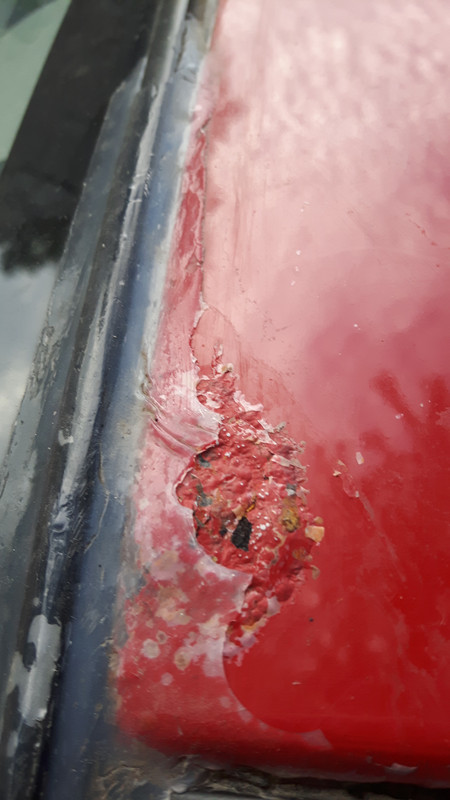 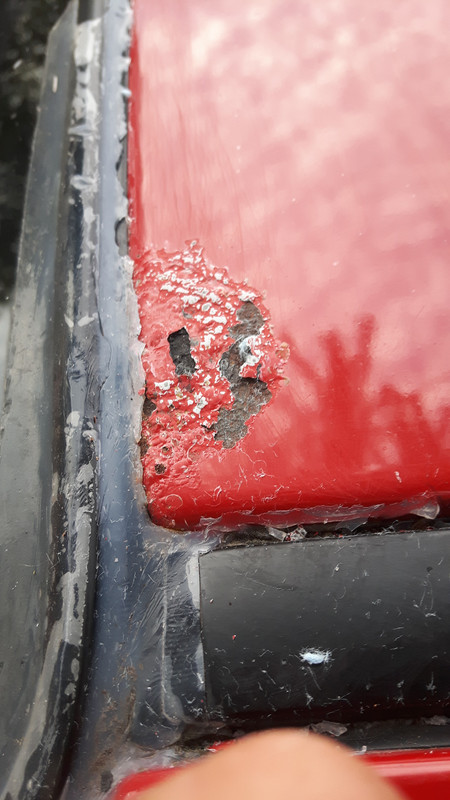 I'm calling this one fixed too !!! 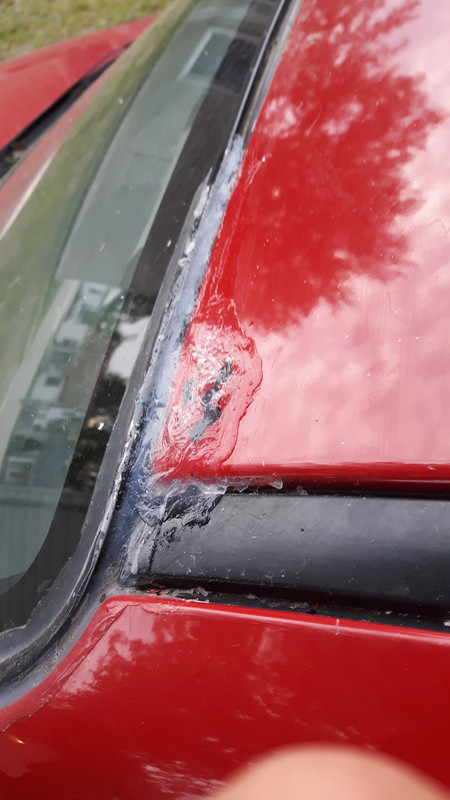 STudMUffin1177 said:
... I can't really tell on the diagram and I've never done the bearings on our car but does the pin go right through the axle nut, or is it used somewhere else? If its somewhere else and not on the axle nut I guess it'll probably be fine huh?
Click to expand...

The cotter pin is for the tie rod end.

The axle nut has a shoulder that you peen into a slot in the axle.

I got tired of waiting for my axle nuts to arrive so I reused my old ones.
I swapped the two nuts to the other side and that gave me a fresh spot on the nut to peen them. 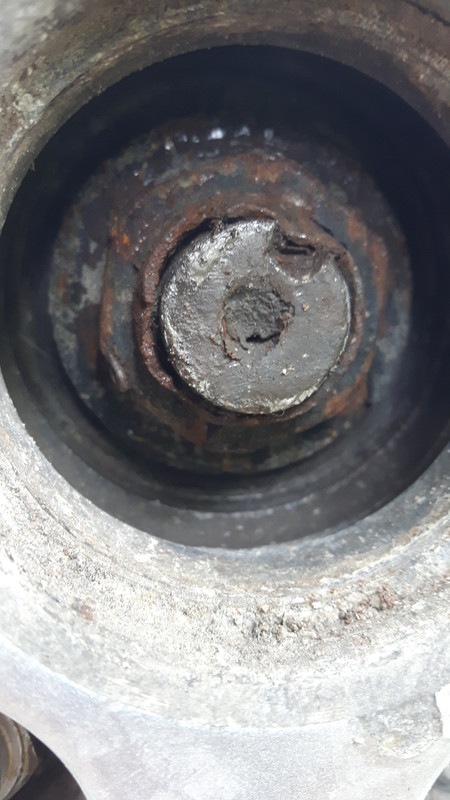 I went for a spin and the bearings are making some noise.
It starts at about 40 mph but it isn't very loud.

I'm going to run it for a while to see if it keeps getting louder.
P

I went for a two hour highway drive today and my bearings we're pretty quiet.

We had to roll up the windows turn off the radio and AC just to hear the sound from the bearings.

I'm thinking I'm just gonna call it good enough and run it for a month or two to see if it gets worse.

If not, I'm calling it fixed.
P

It was just a few days ago when I had more views than you.

You need to post more useless crap on my thread so I can catch up.

Maybe a picture of your bent spud w(r)ench?? lol

I'll have to dig it out for ya haha, I like how you swapped axle nuts to reuse them, that's thinking outside the box. Sorry about the lack of follow up. I've been punching my car since Friday and then lining up a deal on a mp3 for my buddy. Finally got to sit down and catch up on the builds!
P

I decided to take apart my EGR from my parts car to check it out and see how it works.

It's the Canadian version with the coolant lines and vent tube.

It's all rusted to hell and full of carbon deposits.
The parts car was burning a butt load of oil and the previous owner had "Check The Oil" written on his gas cap. 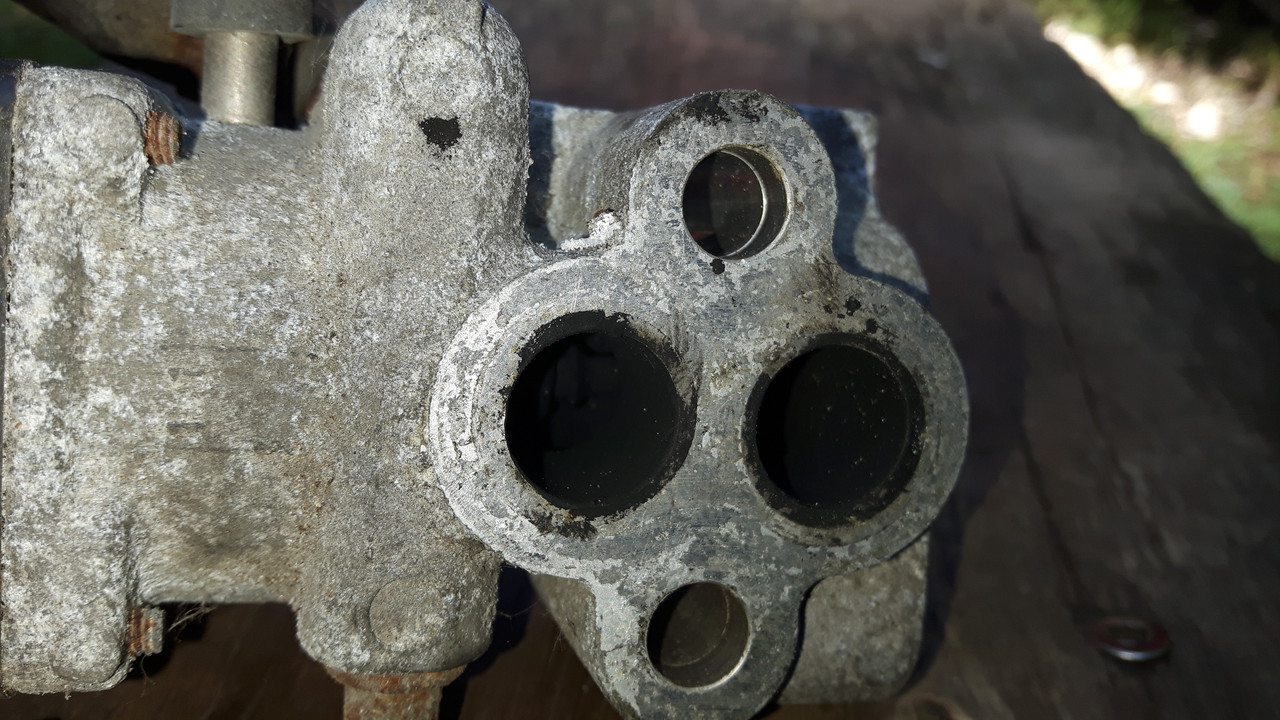 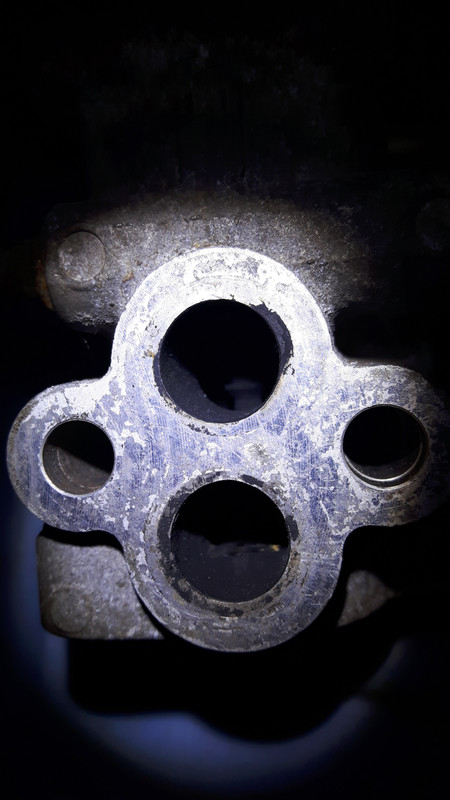 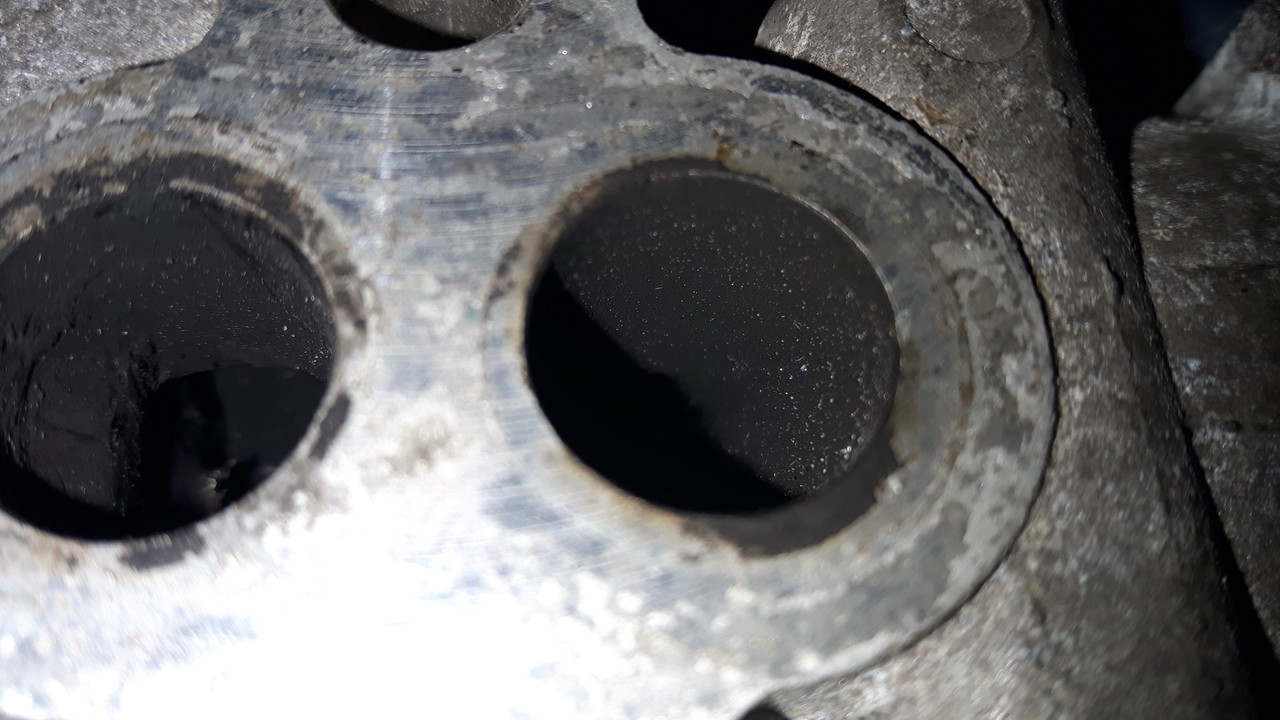 The screws we're nasty and I didn't spray them thinking it wouldn't really help at this point and everything would get all slippery and hard to hold. 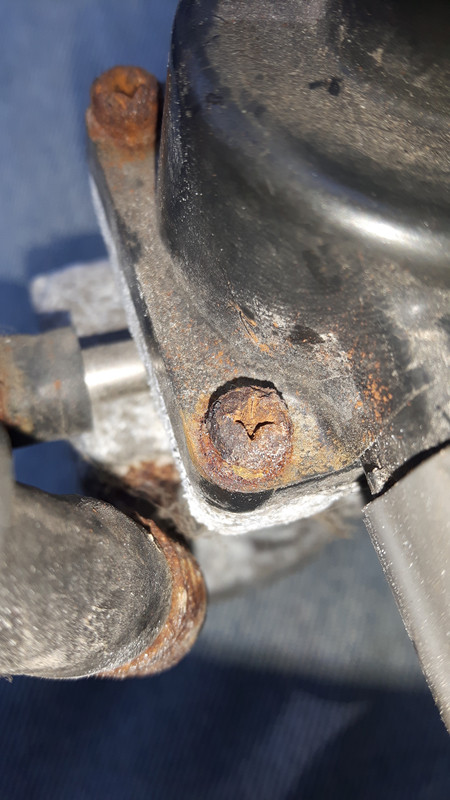 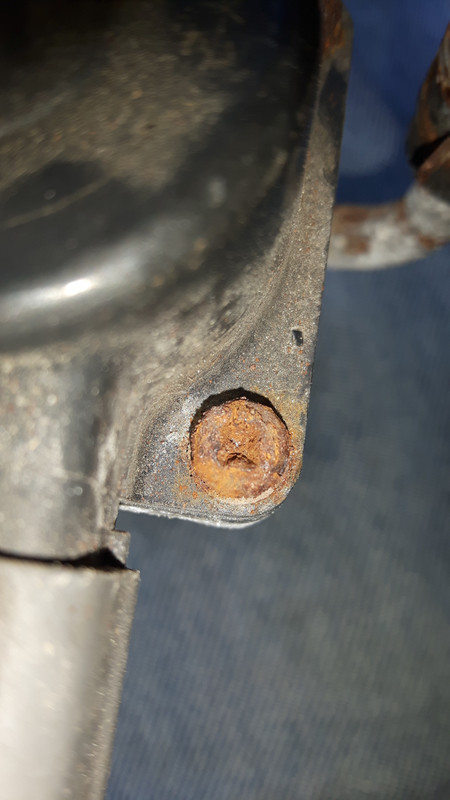 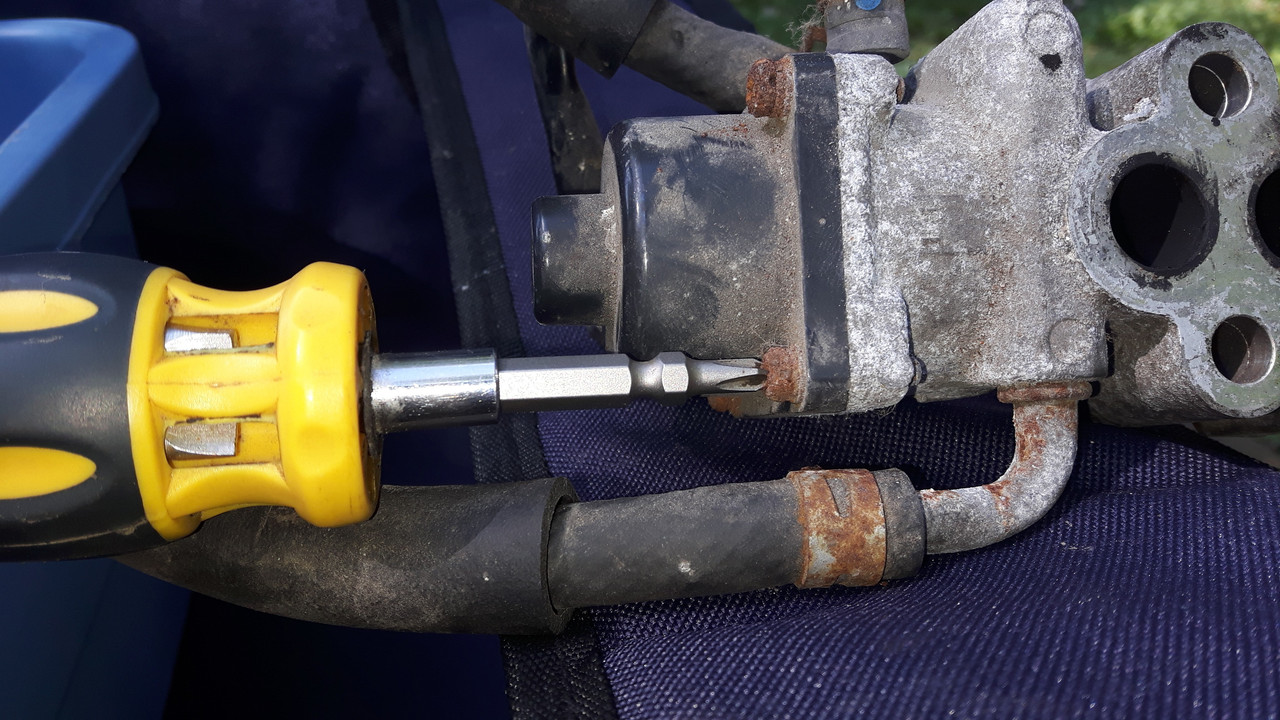 The screwdriver didn't work out and the heads we're damaged from being removed previously.

The ViseGrips got them out. lol 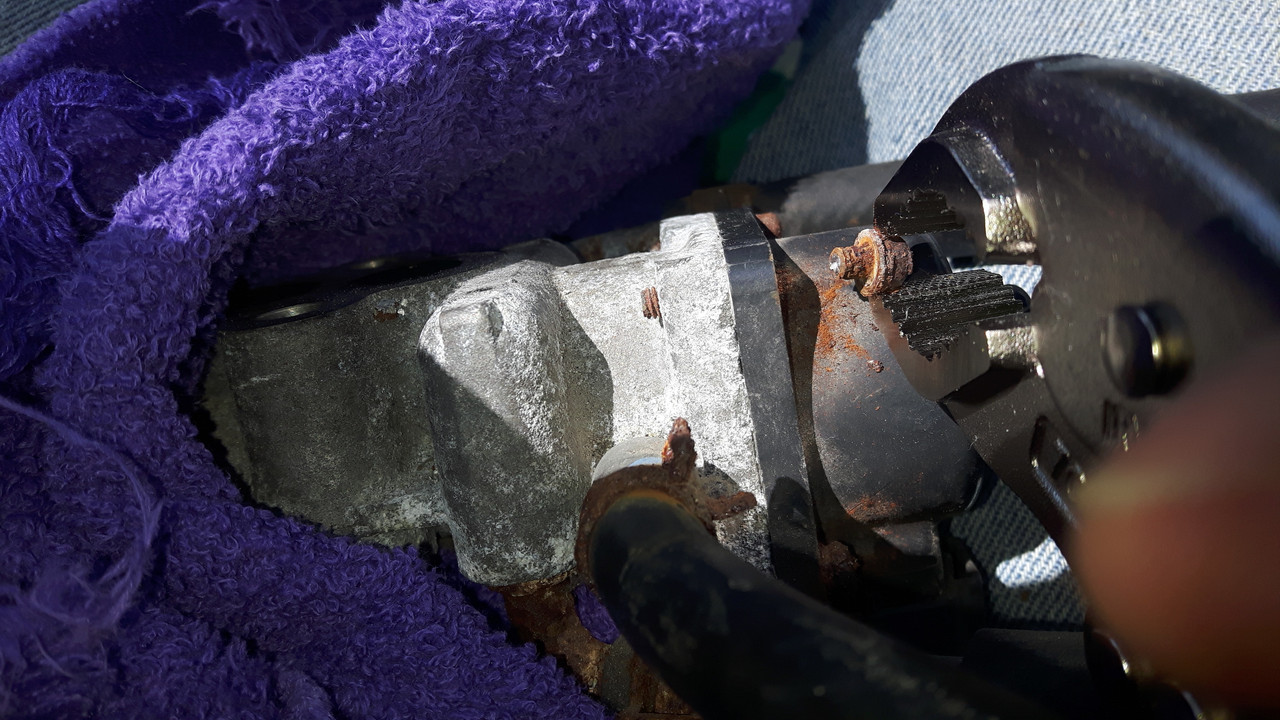 I had to use the chisel to separate it. Lots of crud in there too but the plunger moved freely and smoothly with no binding or sticking. I got this screw out. 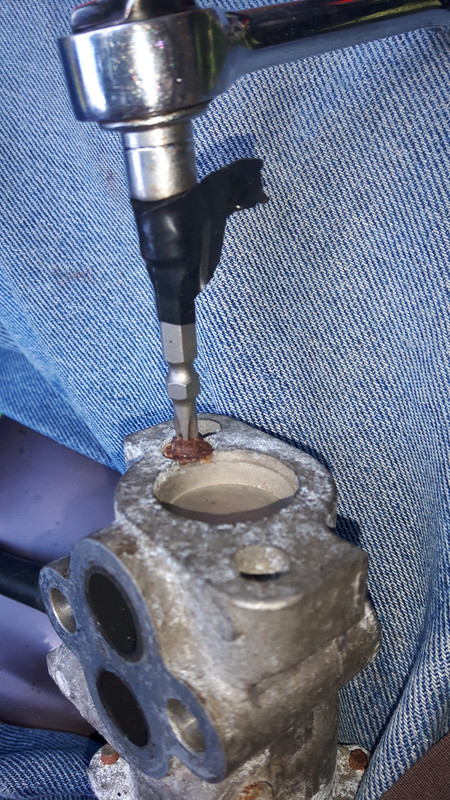 But the end cap wouldn't come off so drilled a hole in it and tried to pry it off.
Didn't work so I decided to leave it. 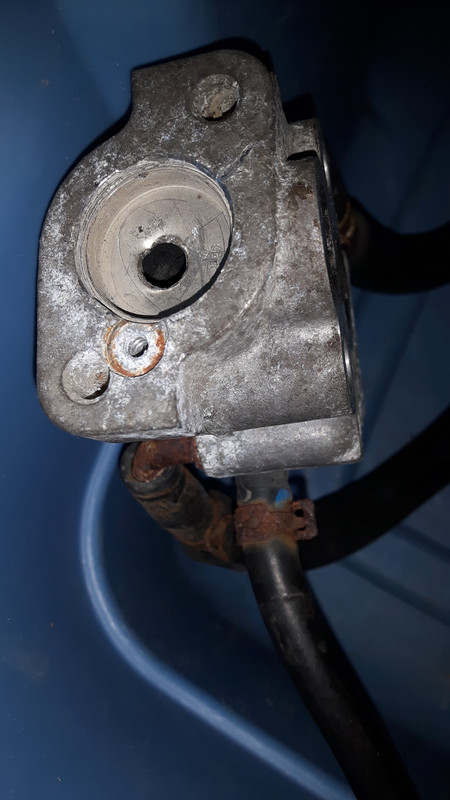 It looks like this pin needs to come out to disassemble it any further and I didn't want to bother. 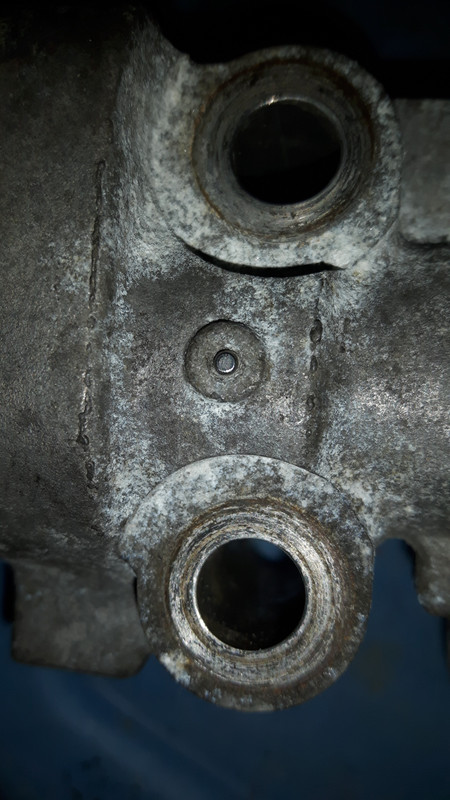 Then I decided to play with the step motor. I couldn't get the motor to go.
I thought it was a four-position motor and it didn't seem to work.

The pushrod is on a worm gear and I figured out that the four outside wires each turn the motor about 3 and if you touch the right wire, it turns about 6. The middle two wires are positive. 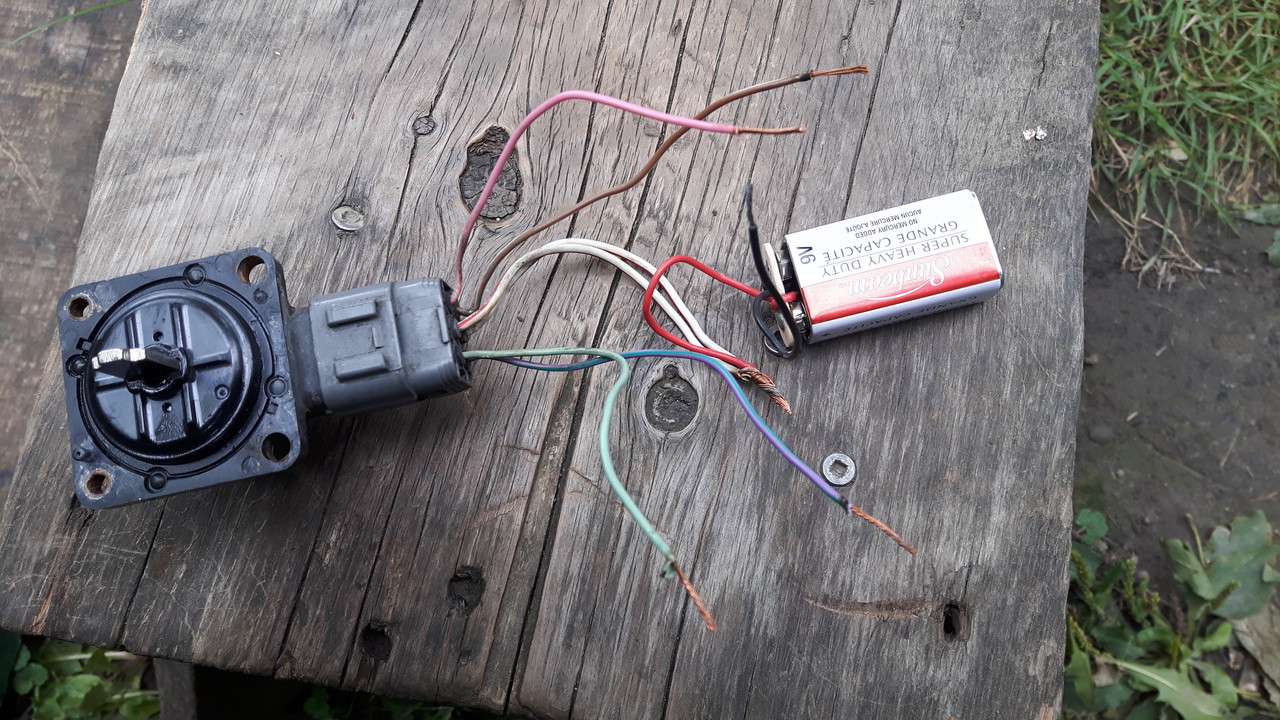 So, as it turns out, I used to have a fully functional EGR until I butchered it. lol

Then a friend came by for snacks.

Aye them crocs though, I'm loving your unbuilt man. I'm learning so much without breaking my car in the process, I have about 12 of his cousins who aren't nearly as nice as yours. They just shit on my car and drop nut shells on it all day. About 3 times a week I gotta go out there and turn off my alarm because they set it off again lol
P

Lol.
Yea I'm rocking the crocks. Only in the backyard though. Not in public.

The squirrels are pretty friendly. If you feed them peanuts they behave.
You must log in or register to reply here.