Originally posted on 3/8/08 on iMazda, updated with new information

For years, there were MSP owners here who talked shit about their stock MSP (turbo diesel) radiator because it is dimensionally smaller than the non-MSP (they call it the "P5 radiator", which is an inaccurate term) radiator. The stock MSP radiator is this way because the is an intercooler that bolts up next to it and fits into the car as one unit. So with the belief that they are smarter than Mazda engineers, they ditch their stock radiators for a perceivably superior stock radiator off a non-turbo Protege after they have upgraded to a front mount intercooler. Those that do get an aftermarket performance radiator such as the PWR or AWR ones designed for the non-turbo Proteges were the truely smart ones as they are effective upgrades.

The "P5 radiator" is NOT an effective "upgrade". It was perceived by many as an upgrade because it fills up the entire radiator area. But it is actually a DOWNGRADE. Simple mathematics effectively proves this. Let's compare core sizes between the "P5 radiator" and the MSP (turbo diesel) one:

Also, the people who do get the "P5 radiator upgrade" normally just get those fans also, and those stock fans are ALSO a downgrade from the MSP ones... the MSP fans are piecemealed together using motors and blades from a Millenia and turbo diesel 626 onto turbo diesel protege fan shrouds... this makes them unique to the MSP only and that they have a higher flow rate and faster (and more robust) motors than even the diesel fans... so while they're noisy compared to some good quality aftermarket fans, they shouldn't be so quickly discounted and thrown away as good aftermarket fans cost money!


So whenever you ditch the stock piece of shit intercooler on the MSP (or a turbo diesel 323 for that matter), the only radiator upgrades you should do is either the aftermarket performance ones or the non-turbo diesel radiator. Only your wallet size is the real problem when you decide to upgrade. As for technical problems, this is what you have to go through to install an aftermarket performance radiator meant for a non-turbo Protege into an MSP:
-need to swap to non-turbo radiator mounting brackets
-need to swap upper radiator hose for ES/P5/MP3 one
-need to swap both radiator fans to ES/P5/MP3 ones or get aftermarket slimline fans if fitment room is an issue
-need to swap radiator cap to the calsonic type one (used on automatic proteges)

However, when you get the non-turbo diesel Familia/323 radiator, there's a different set of problems but IMHO easier to deal with:
-need to swap radiator fan shroud (driver's side fan) to non-turbo diesel one or fabricate a bracket to make the turbo one fit

Both the AWR/PWR radiators have a 1" thick core and the non-turbo diesel one is also about the same size core. The only difference is price and that the non-turbo diesel one is a stock part that uses plastic end tanks instead of aluminum end tanks. Is it really a big deal to have plastic end tanks? Not really unless you track your car constantly. The non-turbo diesel radiator is only half the price of the AWR/PWR units and so it's great for those who are on a budget but need an upgrade, provided you manage to find a deal that beats either the Corksport or Mishimoto radiators. Ebay all aluminum radiator not counting.

The non-turbo diesel radiator's core size is 350mm x 702mm x 25mm which gives a volume size of 6142.5cm a true upgrade over the MSP (turbo diesel) radiator and has plenty of additional thermal capacity for abusive demands that a performance street vehicle would have. It is almost a 100% bolt on unit but with all considerations over the issue with a single fan, it is still overall cheaper to install this than to get an AWR/PWR.

Since the core heights are the same on both diesel radiators, brackets do NOT have to be swapped unlike going to the AWR/PWR. Shown below is a Koyo aftermarket stock replacement for BJEP non-turbo diesel Familia/323 that was sold in Japan and Europe in 99 through 2000 since getting a genuine Mazda (Denso made) one would not make this swap cost effective. The Mazda part number for this radiator is RF1S-15-200B for cars with A/C and RF2L-15-200C for cars without A/C. I don't know what the real difference between having an A/C radiator or not is, but Koyo just makes one that fits either car. 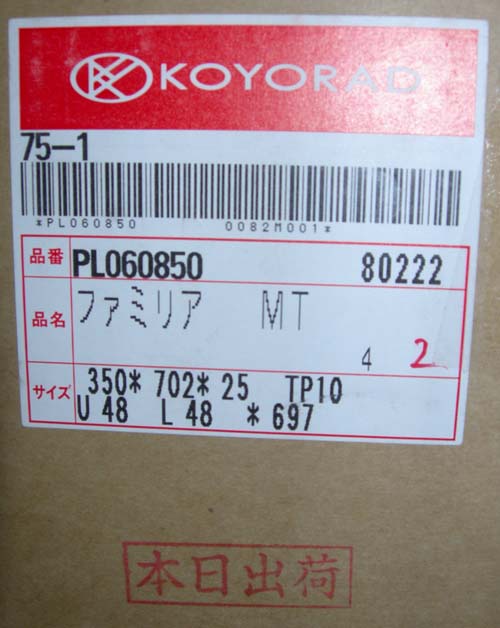 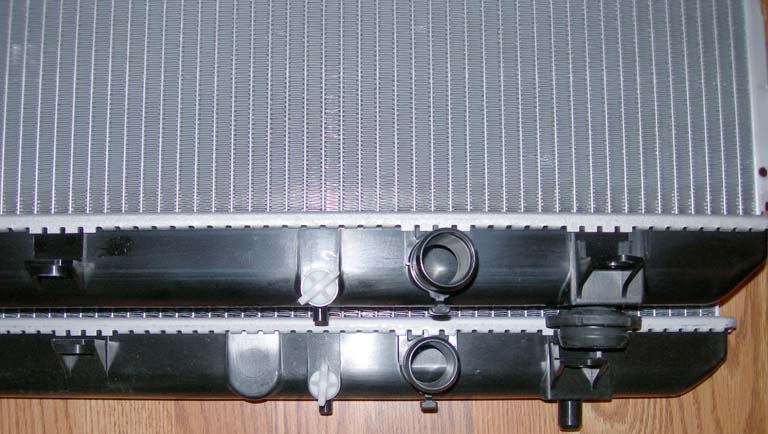 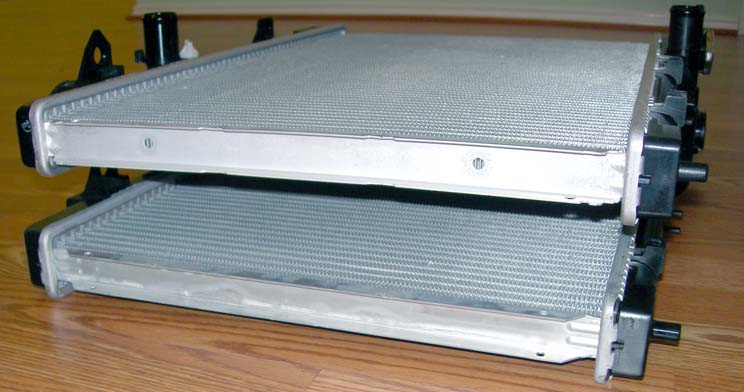 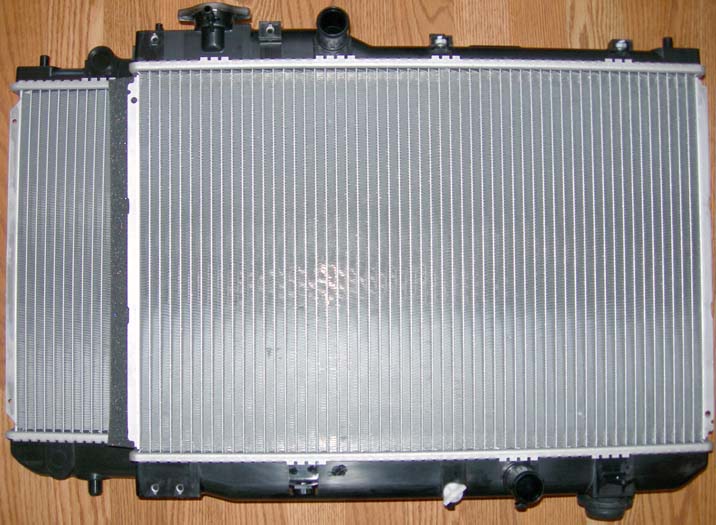 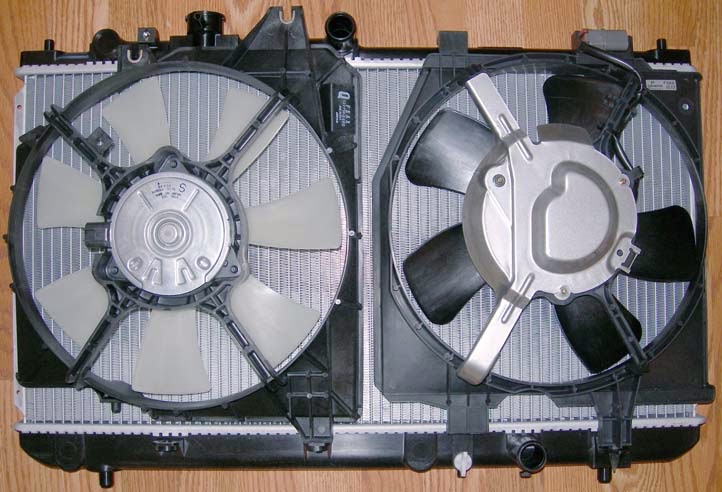 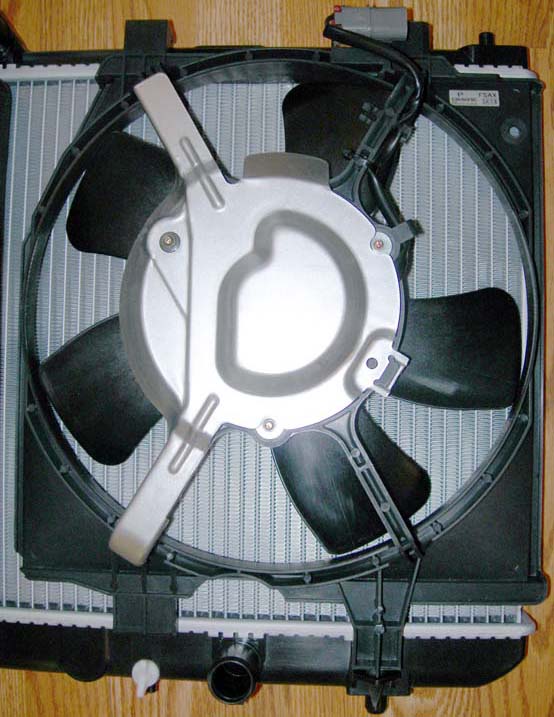 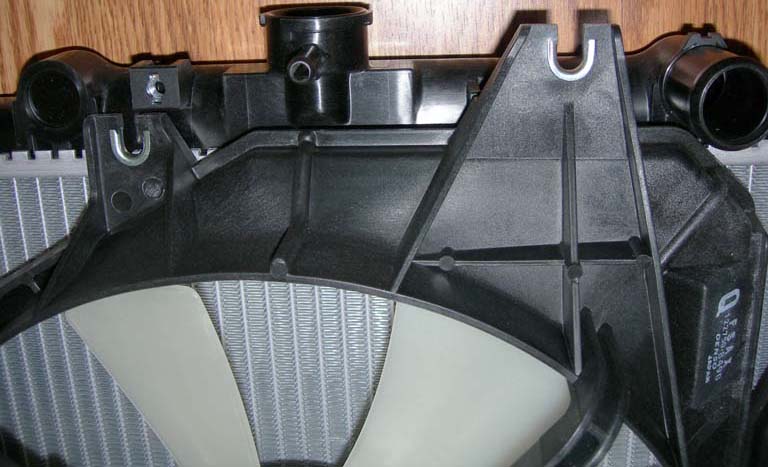 To compare, this is how the radiator fan mounts up on the turbo diesel radiator 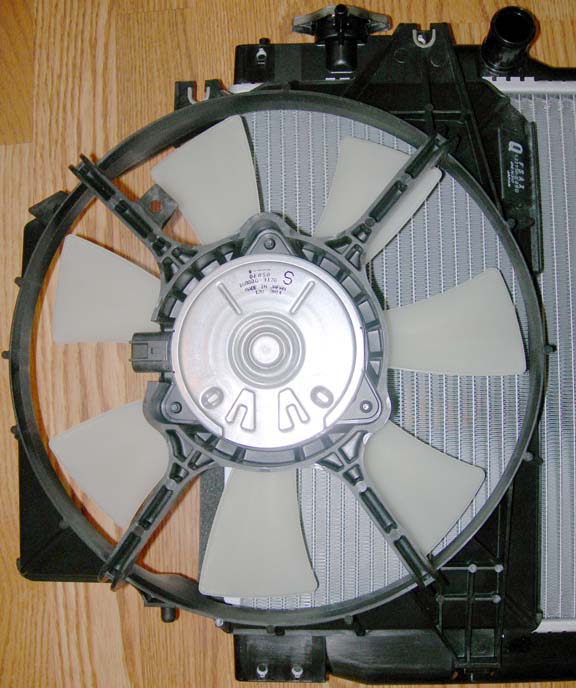 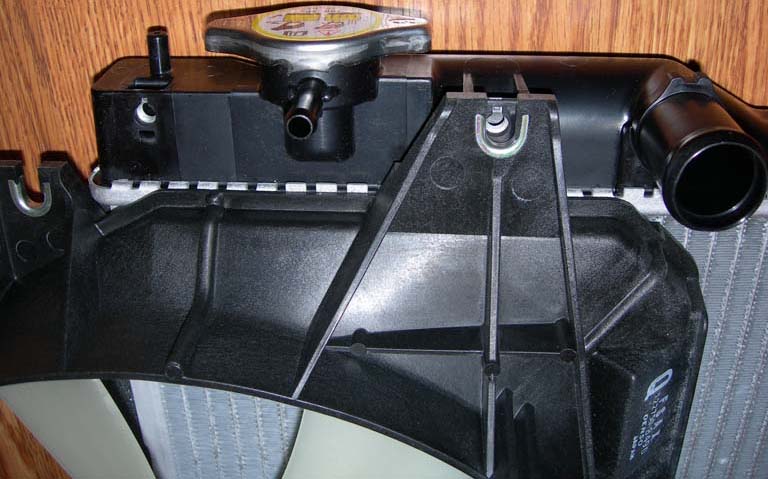 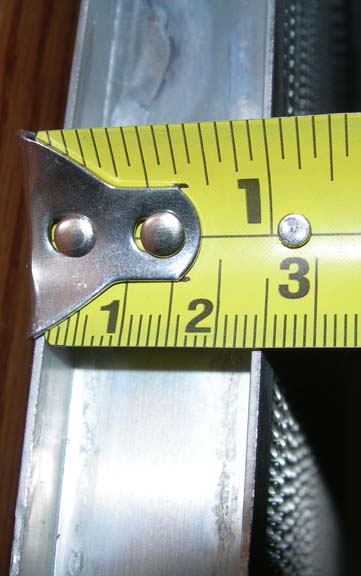 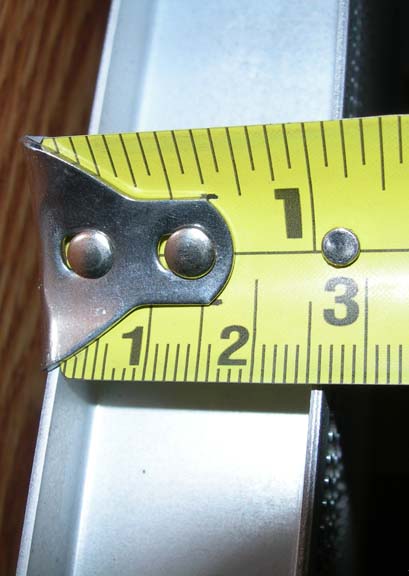 for non-MSP owners who have automatics, the only upgrade you have is this non-turbo diesel radiator or your ebay all aluminum special. AWR, PWR, Corksport, nor Mishimoto makes one for automatics. You *could* use them but you have to install an external transmission cooler which maybe preferable if you have a high powered car but you need a thermostat to control the oil temps, etc... a problem that is beyond the scope of this thread.

There is an automatic version of this non-turbo diesel radiator which you can import from Japan (Europe never got the automatic, go figure). The Mazda part number is RF1V-15-200C for cars with A/C and RF1W-15-200A for cars without A/C. The Koyo part number is PL060851. You WILL need to swap the fan shrouds to the diesel ones (RF1S-15-210B and RF1T-15-210A) as well as the radiator brackets (RF1S-15-240 and FSAX-15-250). If you choose the ebay route, just be prepared for fitment issues or leaks. You should spend a little money to have it tested first at a radiator shop and fixed if necessary. You may also want to test fitment first before bringing it in.


Addendum: At the time of writing this thread in 2008, there was no Corksport or Mishimoto options. If you wanted a good radiator, you had to spend a lot of money getting an AWR or PWR. There were quite a few MSP owners here who got regular Protege radiators thinking they got something better and some of their MSPs may have died because of that (I didn't bother keeping track). The non-turbo diesel radiator was pretty much the only affordable alternate choice. While it has plastic end tanks and no fancy double or triple pass core, it worked damned good and worked better than the stock MSP radiator. The plastic end tank going bad is a non-issue when you just run a lower temp thermostat because the stock one Mazda specs is for emission purposes and does nothing good for performance or driveability! Today this might not make sense to get due to the cheaper Corksport and Mishimoto choices. So now, this thread really only serves an educational purpose and as a good warning to those of you thinking about getting a regular Protege radiator or already have it in your car. Just don't run one, period! The regular Protege radiator just can't output enough BTUs to keep up with a hot FS-DET during the dog days of summer while you're out canyon carving!

Anyway, some of the problems any 4 of these brands is, you have to swap radiator brackets and change your fans out (as already mentioned). Go ahead and swap the brackets because you must do that, but I don't recommend swapping the fans for the regular Protege ones. If you're trying to keep a low budget, do what you must to get the regular Protege fan shrouds. But if you have to get the whole assembly, toss the guts out and swap your MSP fans and motors into the shrouds. It all bolts in and will work just as good as it ever was when you used your stock MSP radiator. The regular Protege fans flow less and are a severe downgrade just like the radiator!
T

Here's pics of the radiator installed in yashooa's MSP... just a couple of bucks worth of nuts and bolts, and a strip of steel to mcguyver a bracket for the fan
the radiator hoses also fitted perfectly without kinks or stretching, just like stock

had the non-turbo diesel fan shroud was imported, everything would've been 100% bolt on perfect but for the sake of staying low budget, this works good enough 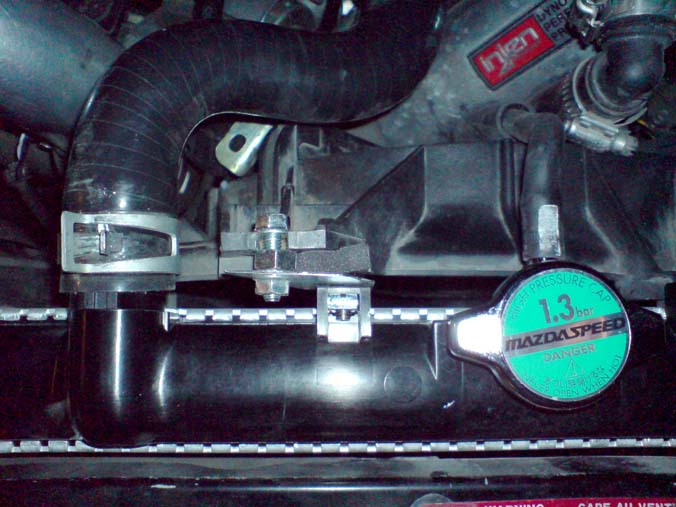 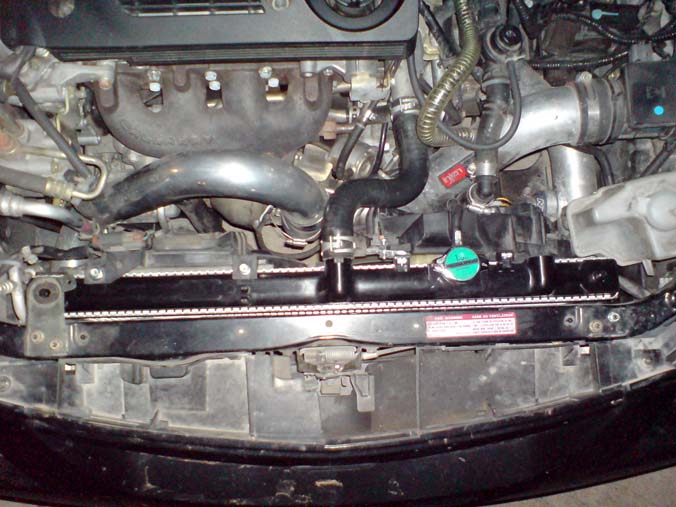 The driver side radiator bracket is missing because he drove the car around without the stock MSP intercooler, so at the time the radiator got swapped, the bracket wasn't in the car but at his house... it now has the bracket back on there and it fits perfectly
T

Good info here, as always. I am not sure a new upper radiator hose is required for the rad swap, I used my stock MSP hose on my Mishimoto rad and the Samco hoses fit fine as well.
T

the regular protege upper radiator hose is a bit longer, so if you tried to use your stock MSP hose, you will need to stretch it
I

Damn so the Mishimoto is a 50% capacity increase over the stock MSP radiator.
T

no, mishimoto is only a 33% increase over the MSP radiator at best
you were looking at the wrong numbers... mishimoto is over 50% larger than the P5 radiator
H

It's still a big upgrade for less than the cost of an OEM MSP rad.
C