It's been a while since I last posted anything here. I'm a long-time owner of a yellow 2002 Protege5, my dad purchased it new, and I bought it from him as my first car in 2007. I had to rebuild the rear brake system (typical leaky caliper issue) before I could drive it, and since then I have done every single job including timing belts, clutch jobs, full suspension, etc. I learned almost everything I know about cars working on it over the years. VIN ends in 1776 as well, so I'm stuck with it (being hopelessly patriotic).

Anyway, since I have been planning to keep the P5 as long as I can, I have always semi-sorta been keeping my eyes open for cheap spare parts. Maybe even an FS block to rebuild and have on stand-by. A month or so ago, I stumbled upon a Copart auction for a Mazdaspeed Protege and got it for a steal. It was totaled just badly enough to be a perfect donor car, but still too expensive to repair. She's a gray 2003.5 #1632, no mods, 141k miles. She even has the original Mazda battery. Interior is in prime condition with only the slightest of UV fading on the rear headrests.

I plan to post pictures of the part-out/conversion process as well as some videos once I edit the dog snot out of them (I am not good at making videos). I will likely be selling parts from the car that are not MSP-specific (those are going on/in the P5), and posting all relevant information here so that everyone can enjoy the process.

Plan for now is to do a complete conversion from P5 to MSP5 with all stock parts. I will then likely practice rebuilding the P5's block and then eventually rebuild the MSP block with better internals for a little more boost. I don't plan on making this a track car, just a bit peppier of a street car.

Wish me luck! I understand many folks may say this is a waste of money or inefficient, etc. But I don't really care. I've wanted to do this exact project for so long, it's like a pipe dream for me. 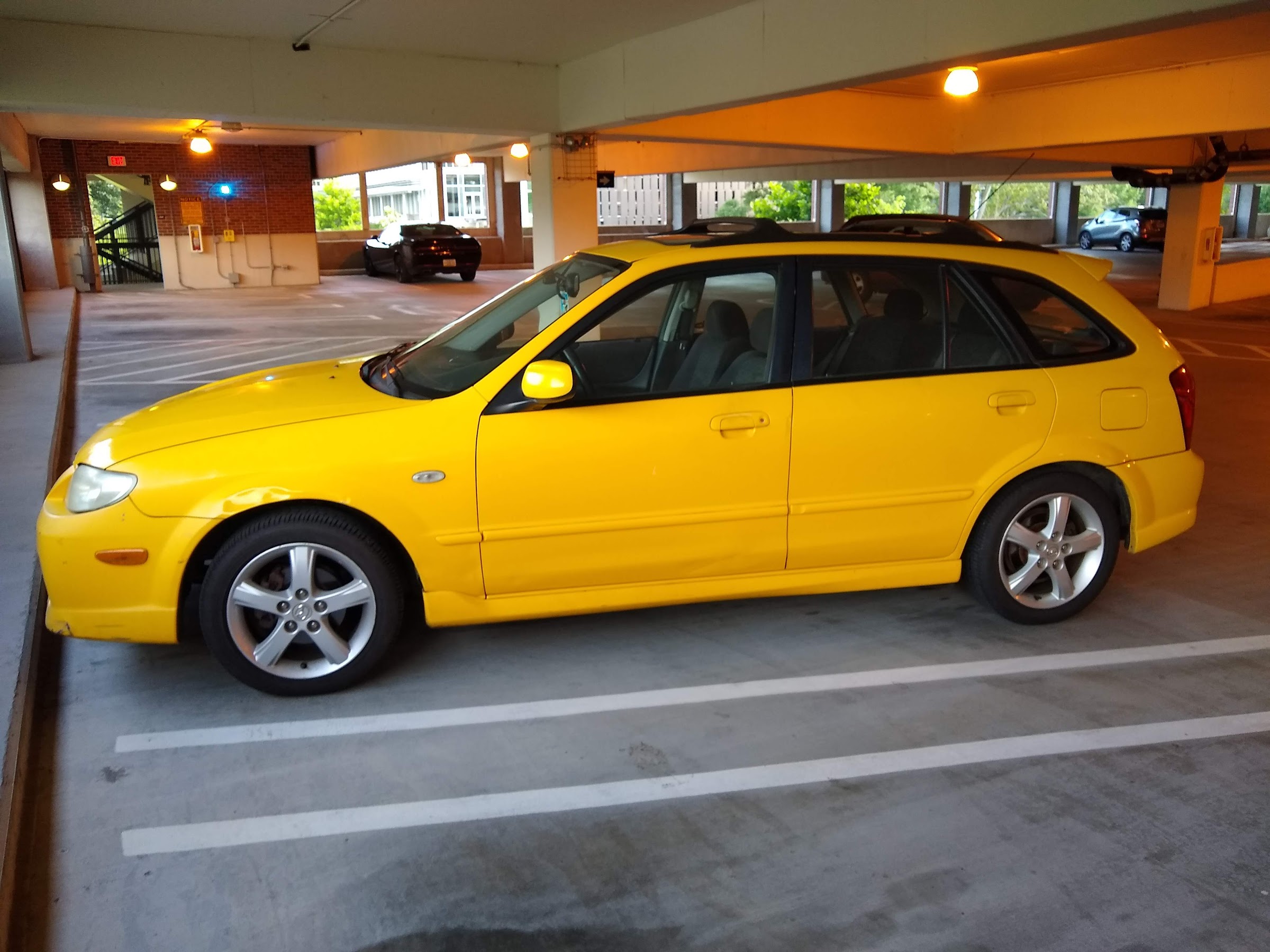 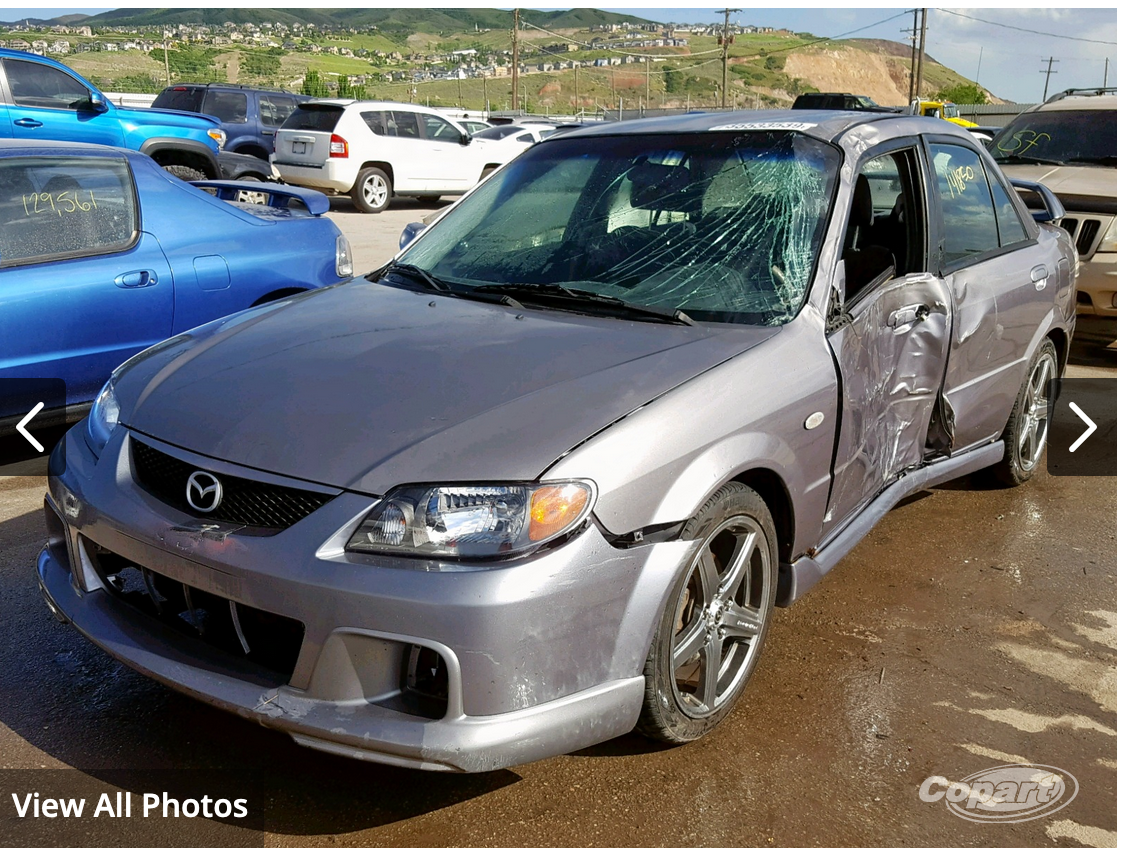 Getting the driver door off proved difficult due to the latch actuator being completely crumpled in. I ended up having to crow-bar the outer sheet metal off the door and beat the snot out of the actuator until it released it's death grip on the door latch. Close-up of A-pillar and roof damage 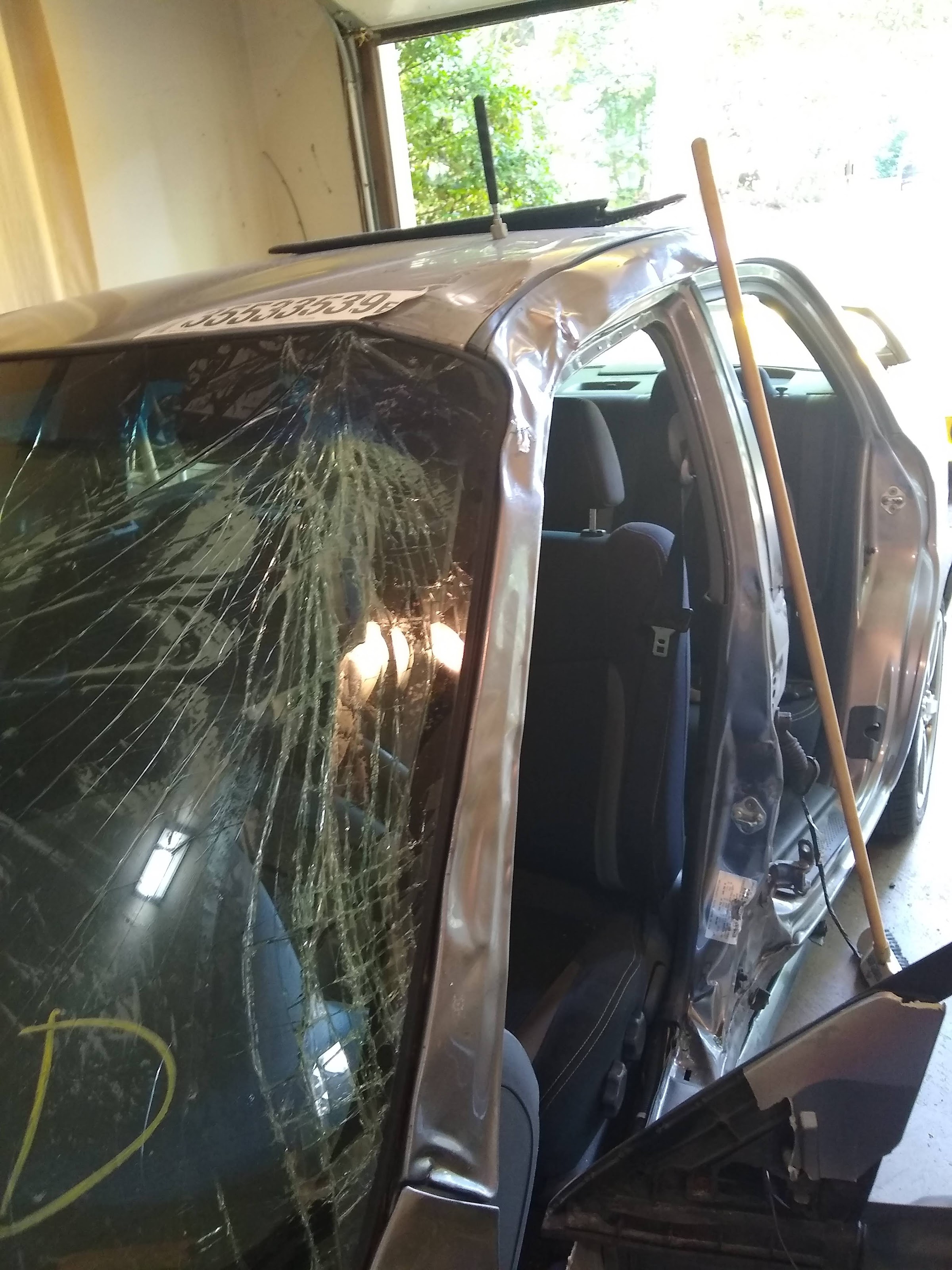 Close-up of B-pillar and lower frame damage. This impact rippled into the floor pan and also pinched the rails the driver seat rests on. 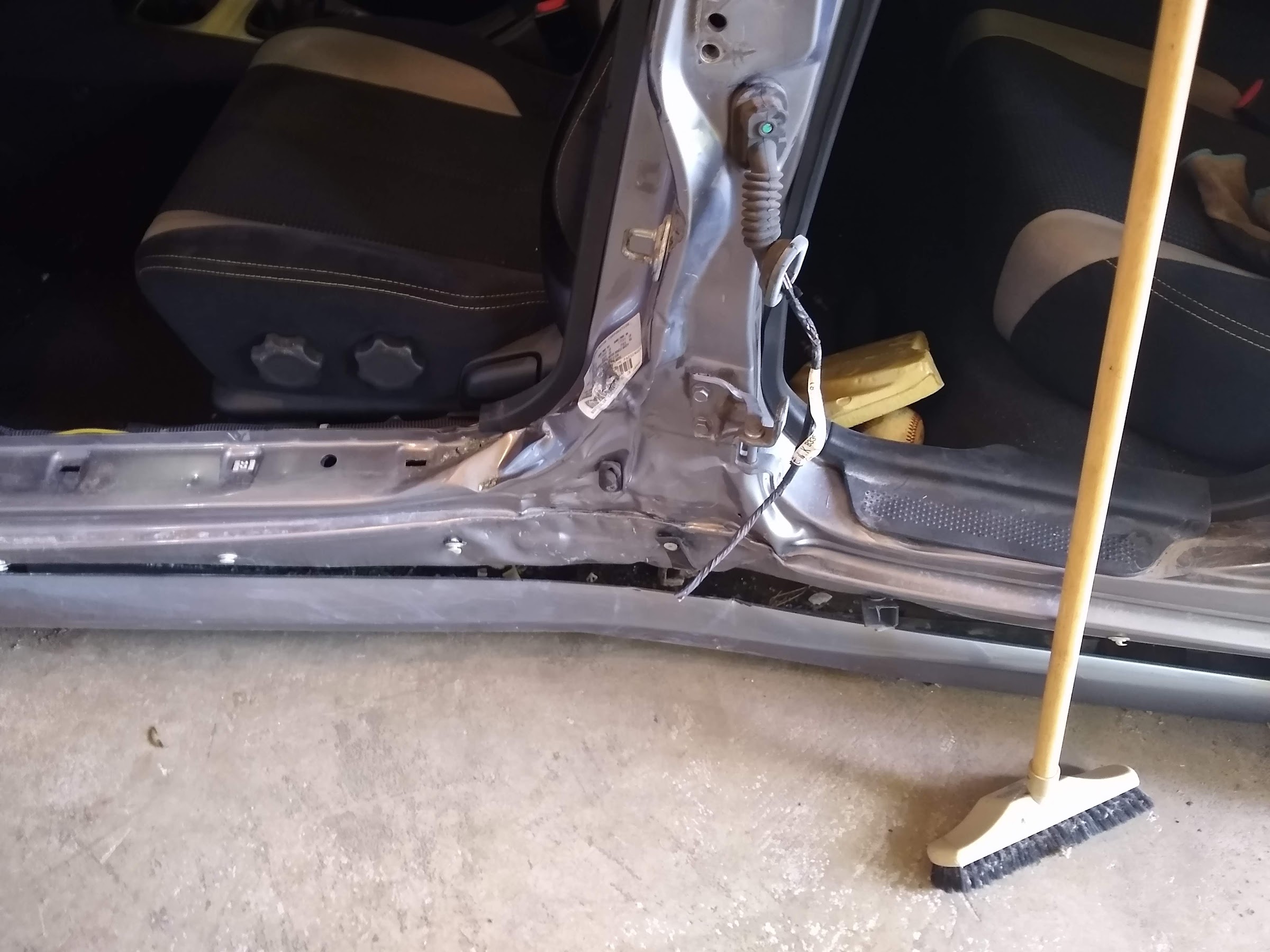 Finally got the rear amp/subwoofer assumbly out after taking out the seats and the rear plastics. 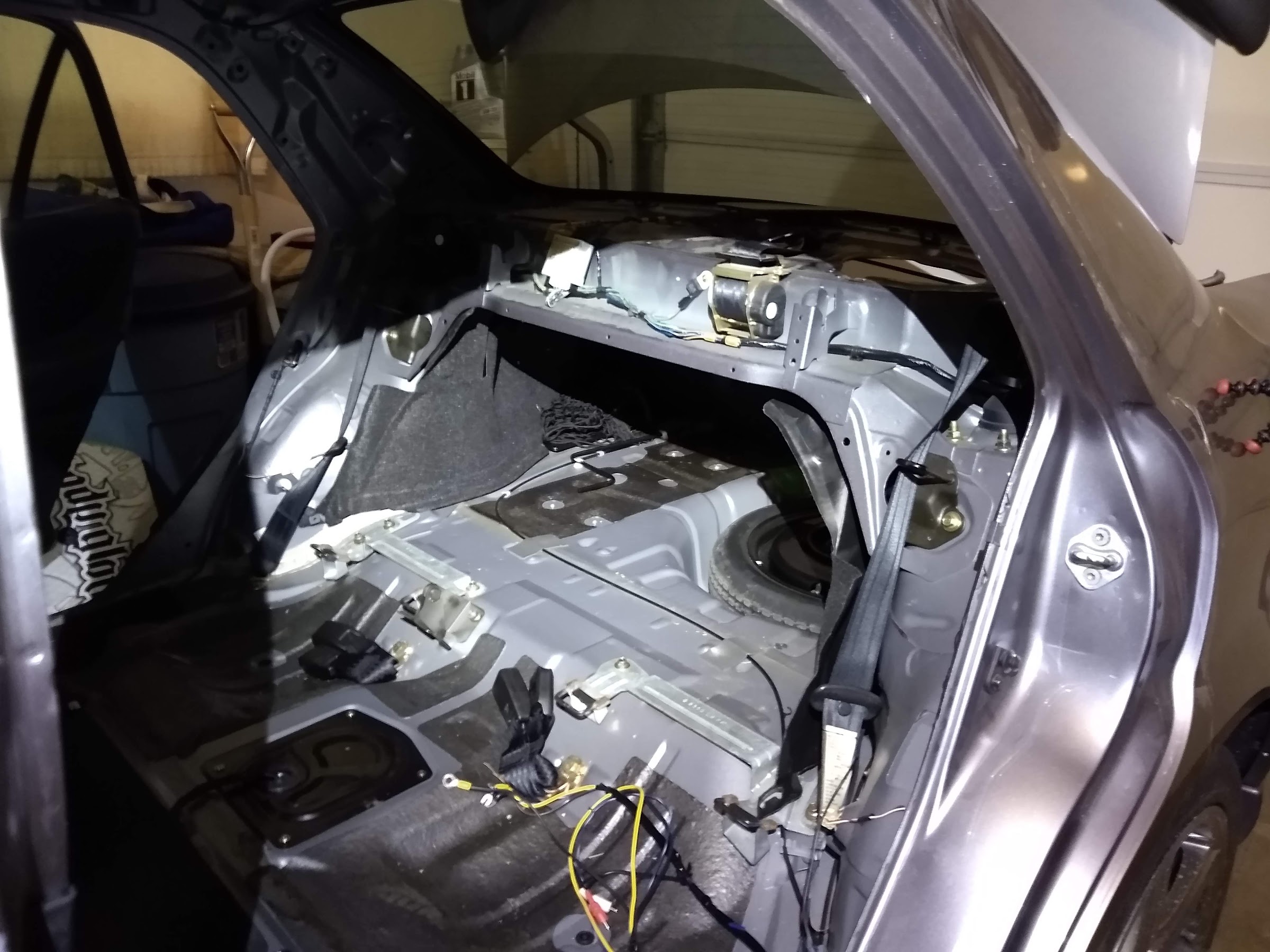 Finally got time to tackle the (relatively easy) external plastics and bumper reinforcements. Plan tonight is to pop the hood off, attempt taking the rear glass out without shattering it, and then drop the MSP exhaust. Also got the fenders off, and found some unfortunate rust. I really only need the passenger side one (pictured here), but I'm seeing nice fenders in-state for sub $50 on car-part, so I may just scrap these. 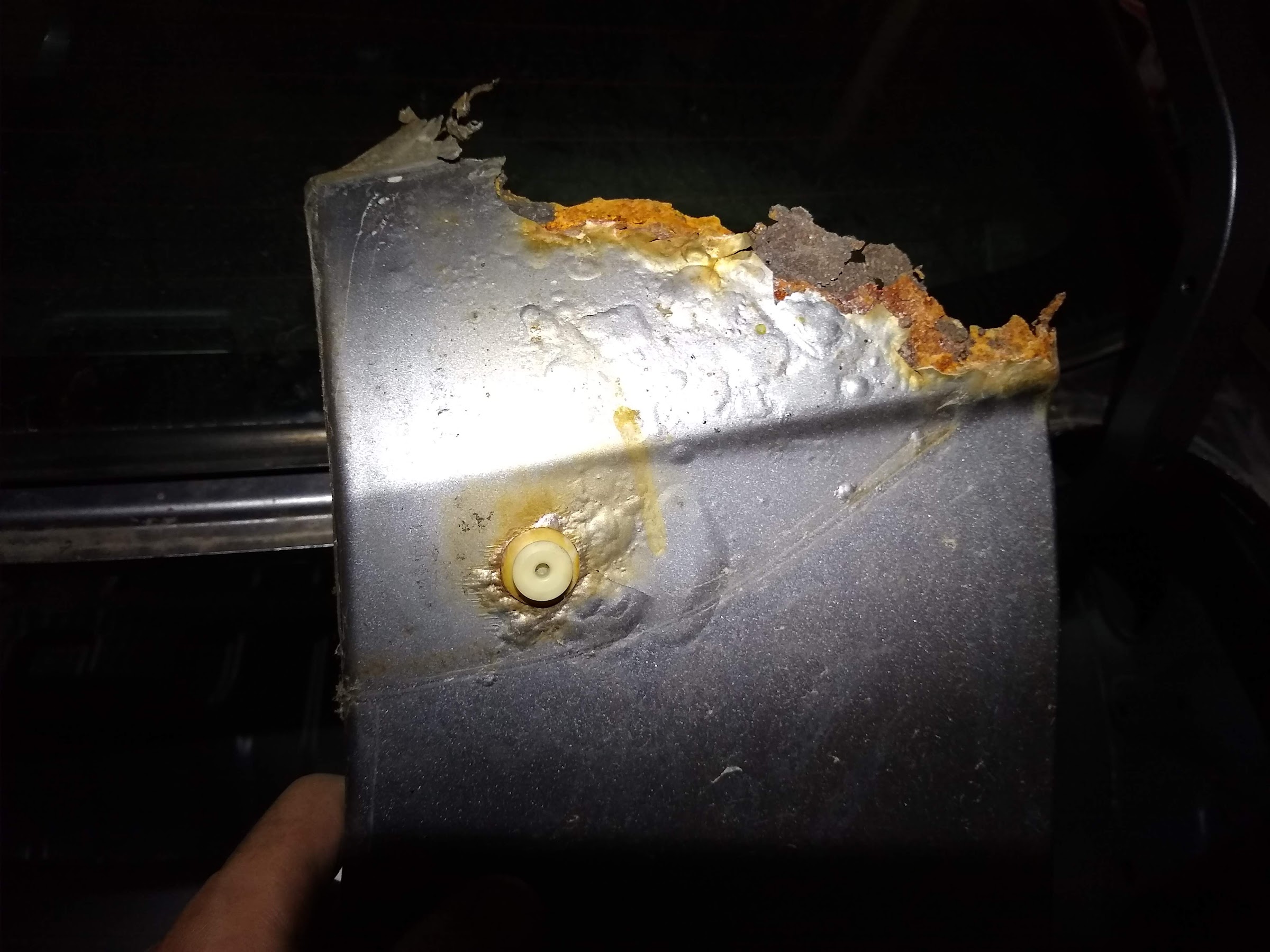 EDIT: Conversion complete! Still some tuning steps, and maybe some minor upgrades left to do, but she's done! I'll add a lot more photos at some point, but for now, here are some "mostly finished product" pics:

Block pulled out of MSP 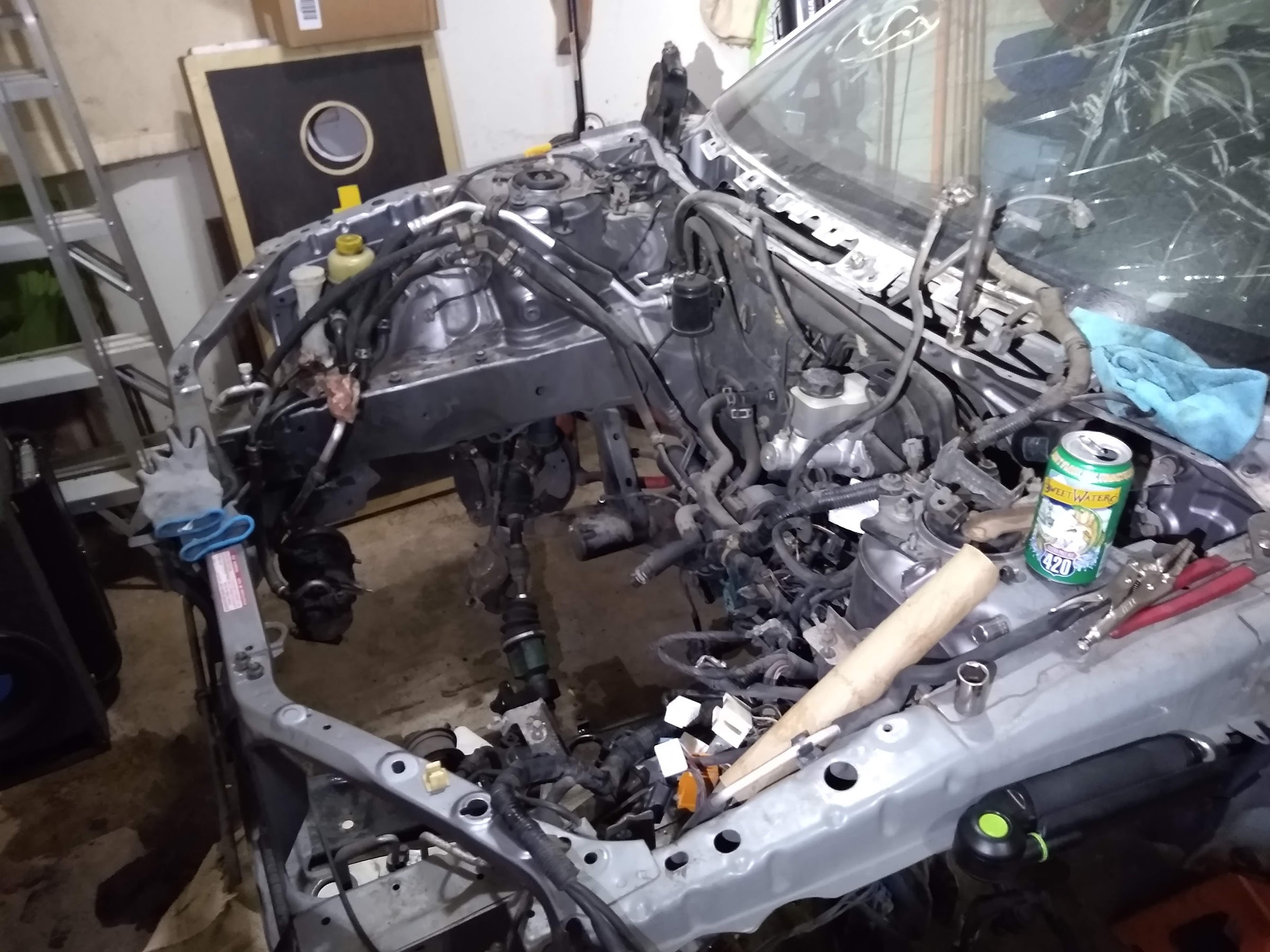 My brother helping me take the last few bits off the frame before scraping it. All the parts! This doesn't include the body/interior stuff. That was stored in the basement. 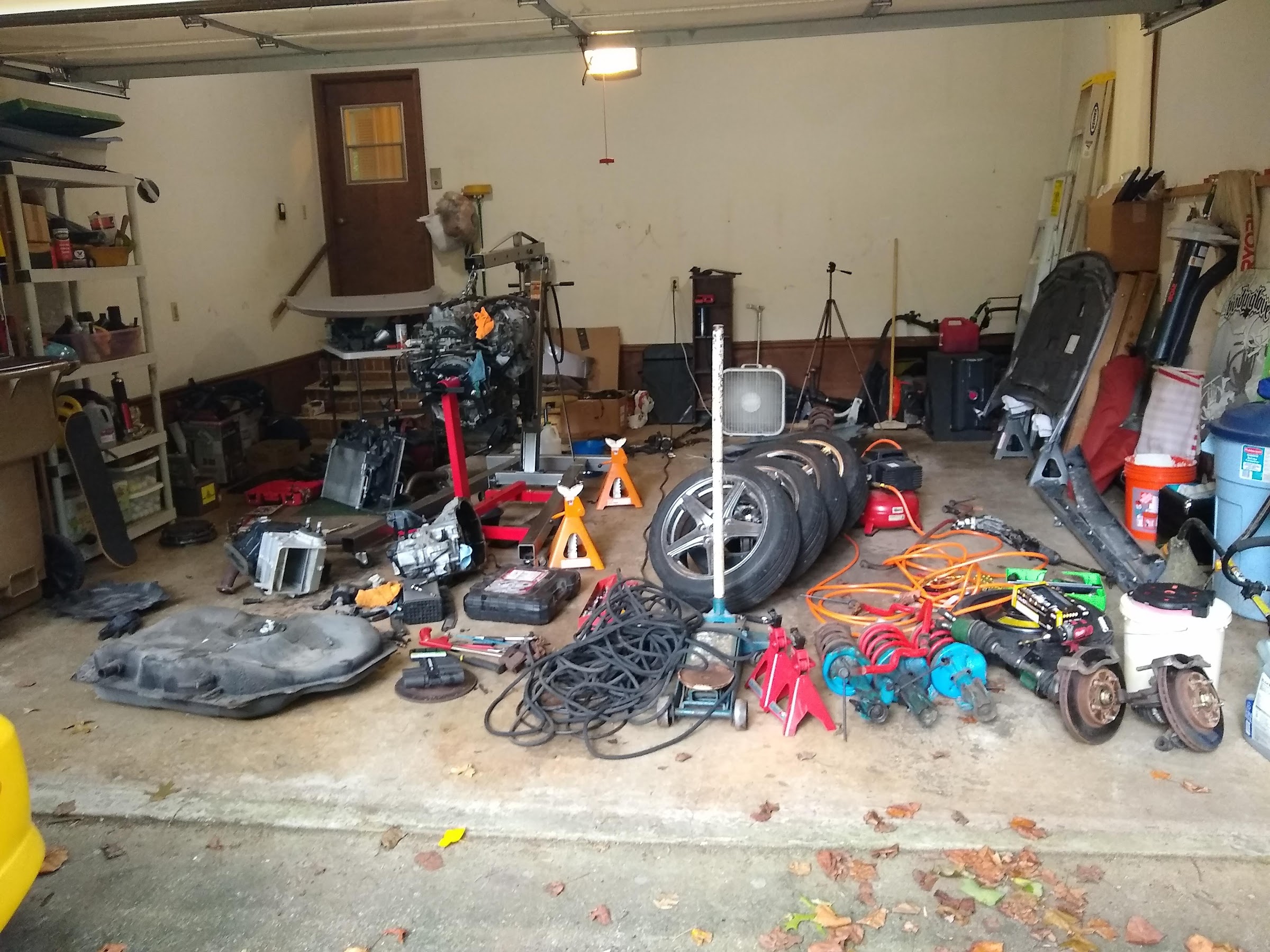 Little did she know what would transpire over the coming months... 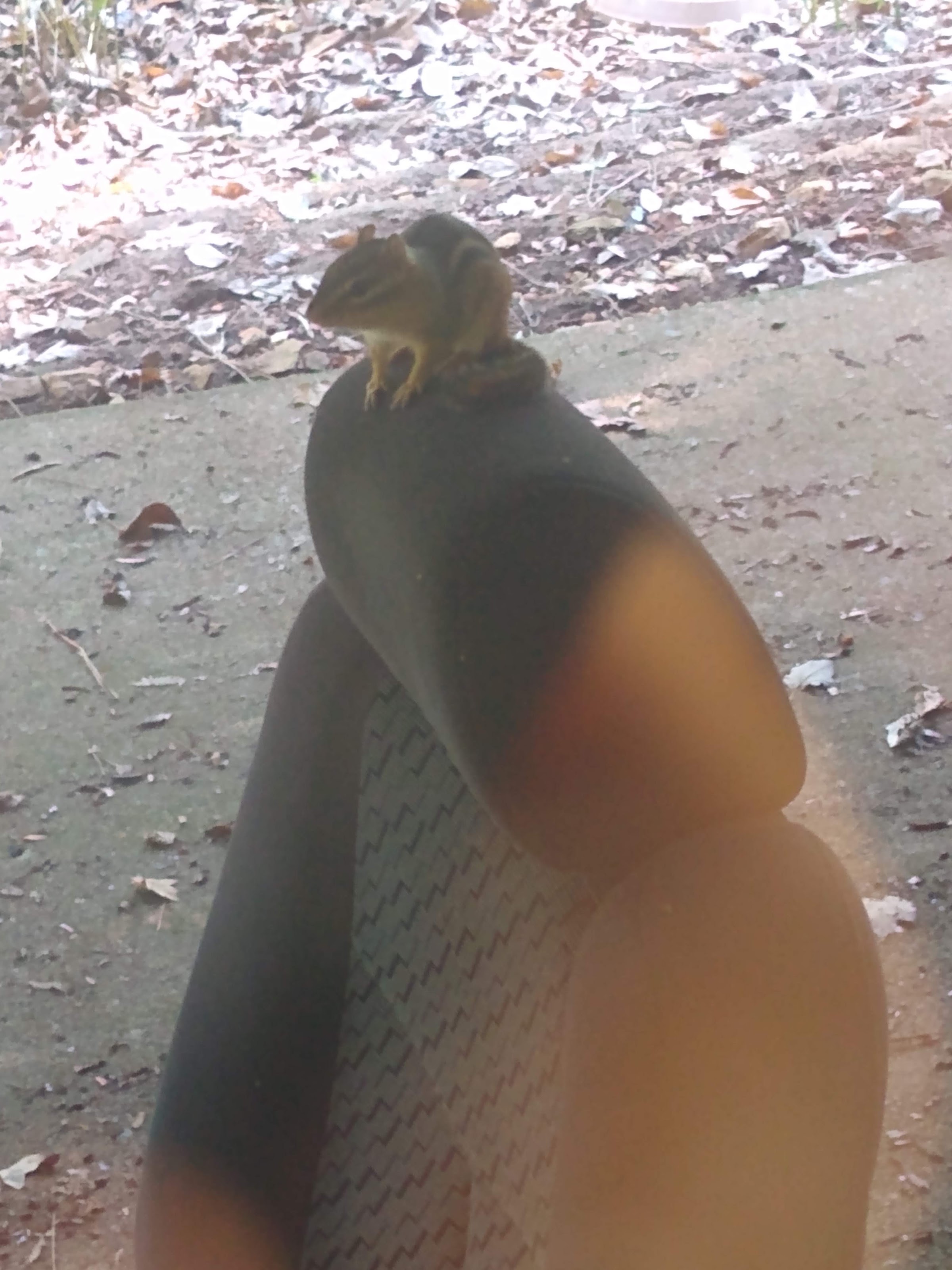 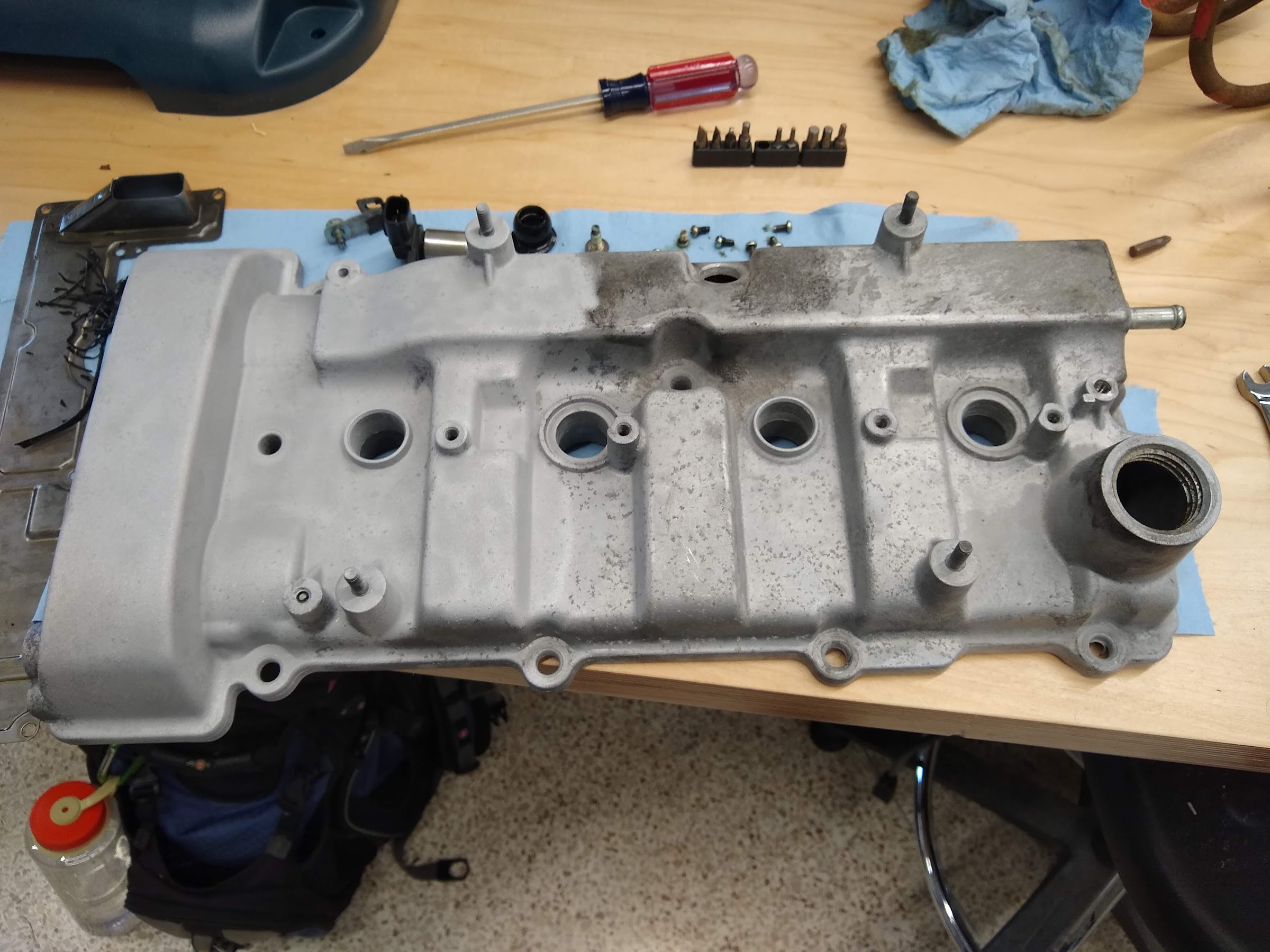 Cousin helped weld the Racing Beat muffler back together Dry-iced the sound deadening for an extra bit of weight reduction (I think 27lbs, maybe more?) 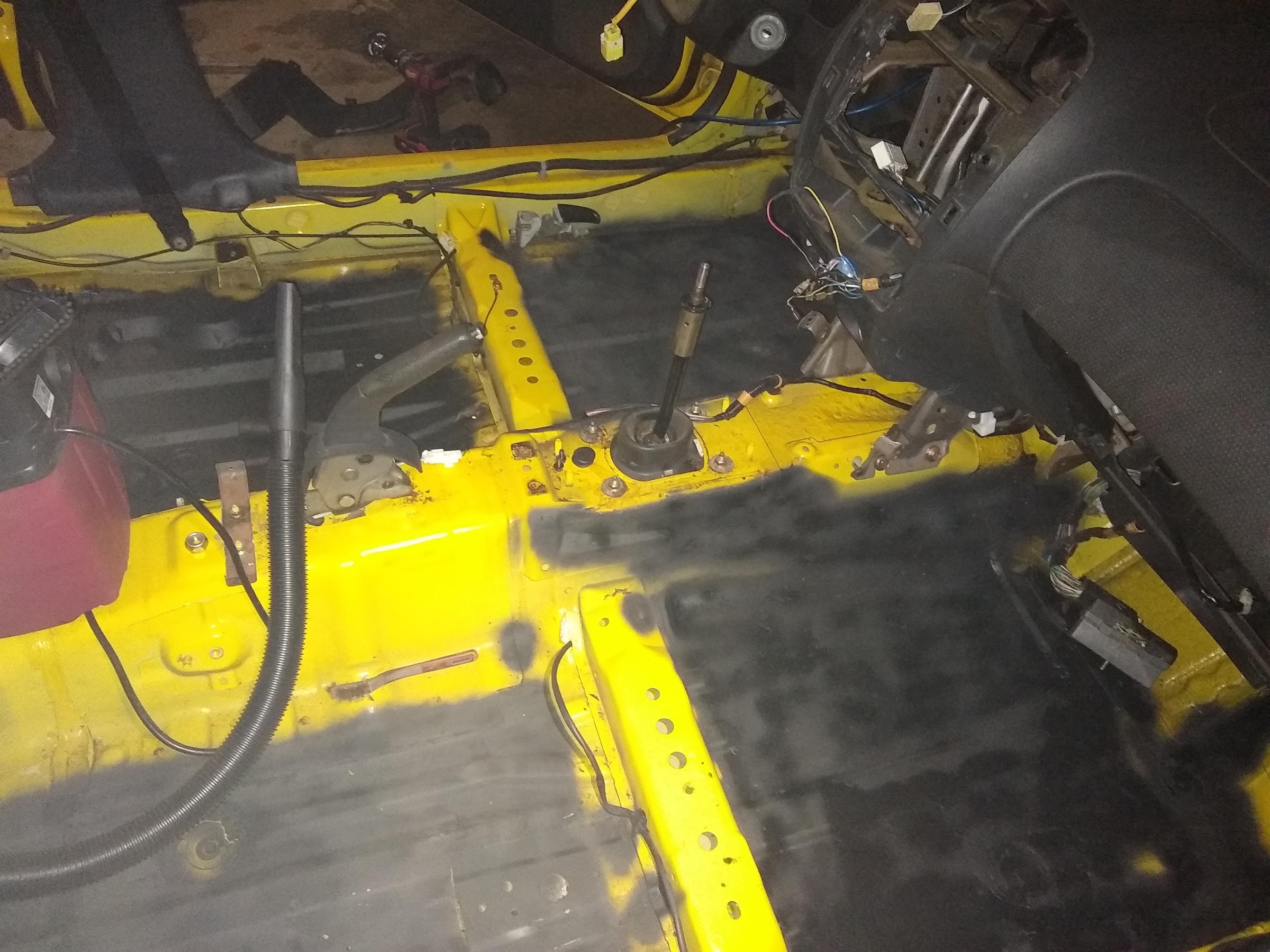 Pulling the old FS out. Still runs fine, will end up likely putting into a different P5... 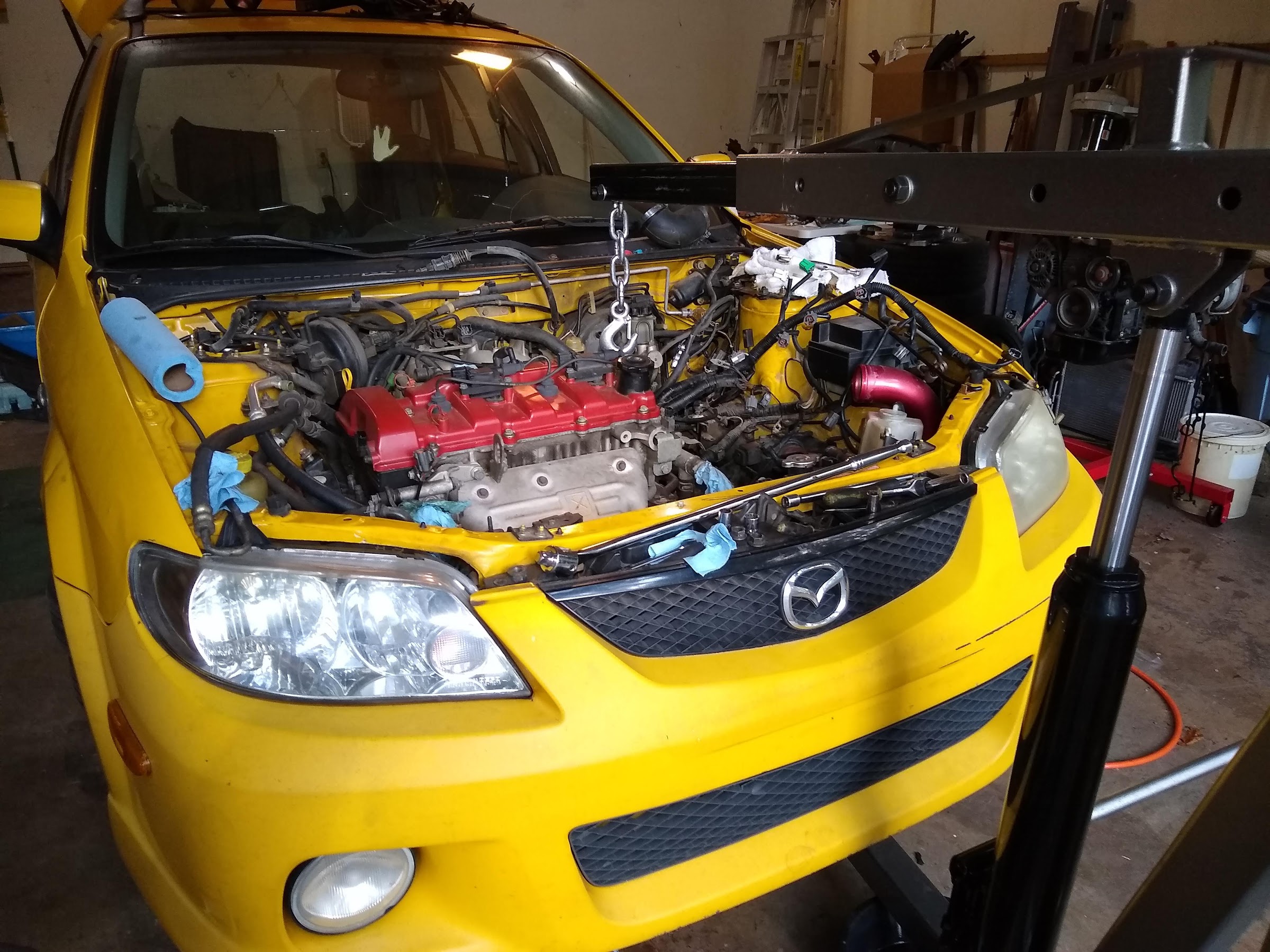 New windshield. Had been cracked for 5+ years 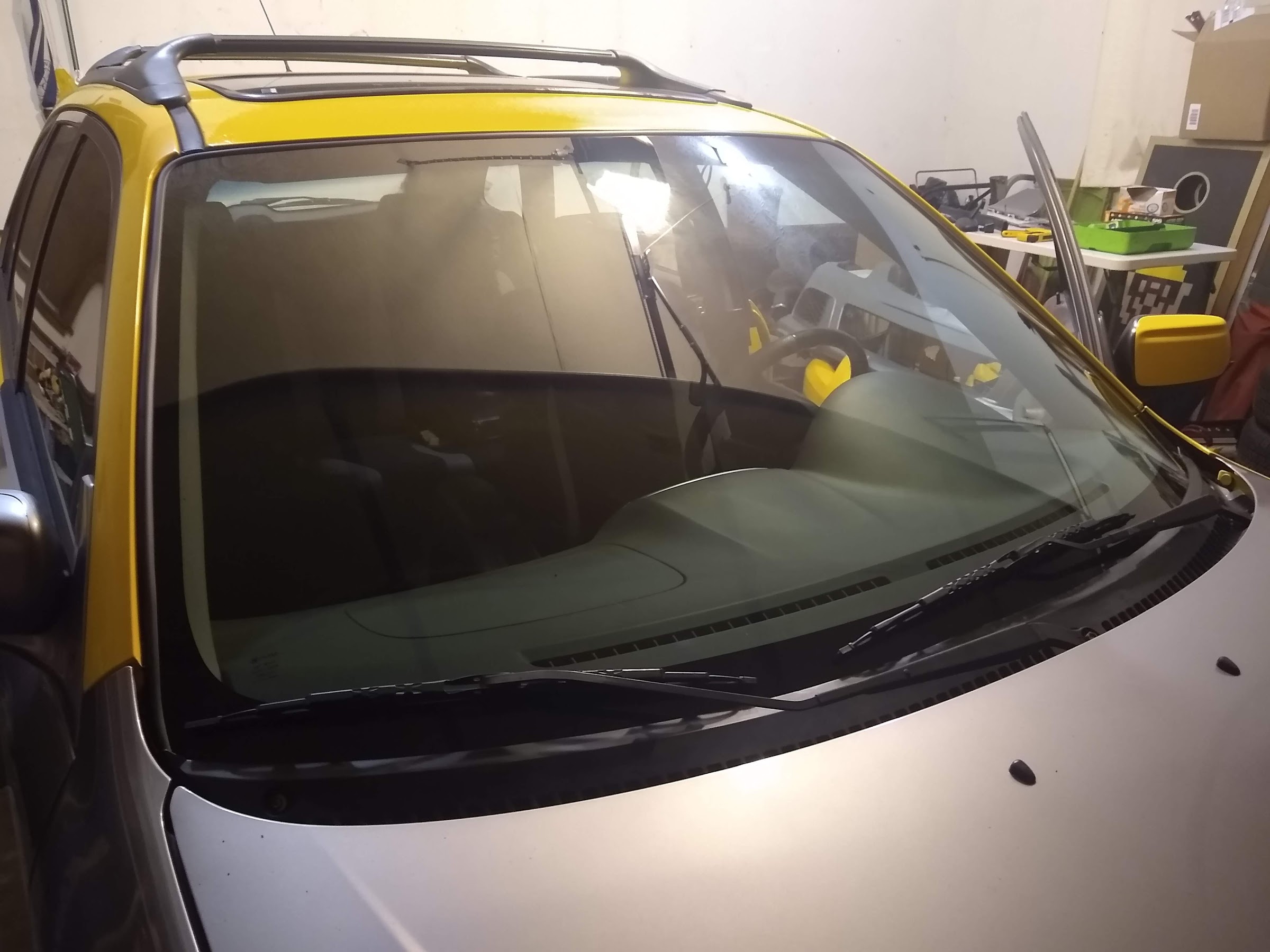 Mostly put back together with salvaged hood, passenger door and fender (deer damage from years ago) Still deciding on bumper. I like the fog lights, so I may try and repair and mod the MSP lip... more on that later. 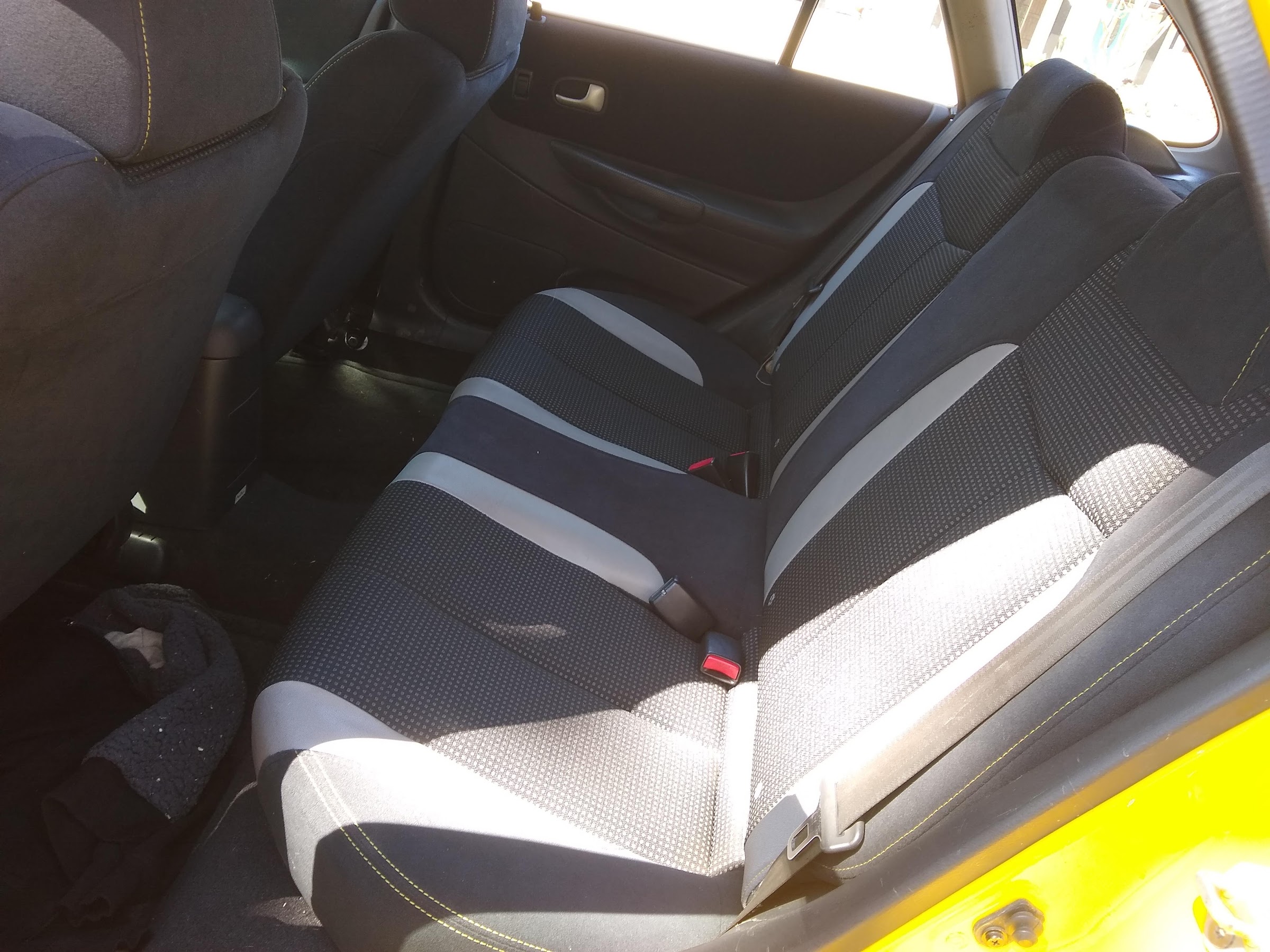 MSP Tail pipe sticks out a little far on the P5 bumper, but I'll be swapping exhausts soon anyway. I'm considering cutting and welding the MS tip to what I get, but I'm still debating. Aw man, I wish my vin ended in 1776 that's America as fuck. Good luck on your swap man, suuuuubbed

Anyone here know if the A/C system is a direct swap between the 02 P5 and the 2003.5 MSP? It looks like the condenser might be a little smaller in the MSP to make room for the stock intercooler, but it could be my eyes playing tricks on me. I would like to avoid cracking the A/C system if at all possible, and I know my P5 system works fine.
B

You'll have to swap condensers if you want to use the stock side mount intercooler. Only way around that is to go front mount.

Good to know, thanks for the quick reply. I'll have to call up a mobile mechanic to purge the MSP's system then, and have him do the P5 in the same trip. While I plan to eventually upgrade the intercooler, "stage 1" of this particular project is to do a 1:1 swap of everything as much as I can.
B

Good luck with the swap!

On second though, I may go ahead and buy the CXRacing intercooler kit over at mazdaspeedtuning. Custom aluminum piping, BOV, and if I need a more beefy cooler later I will already have the piping in place.

Anyone have any thoughts on CXRacing's stuff?

Might have to go after market exhaust as well. Appears that the stock muffler took a beating... I might be able to get my cousin to repair it. We'll see. 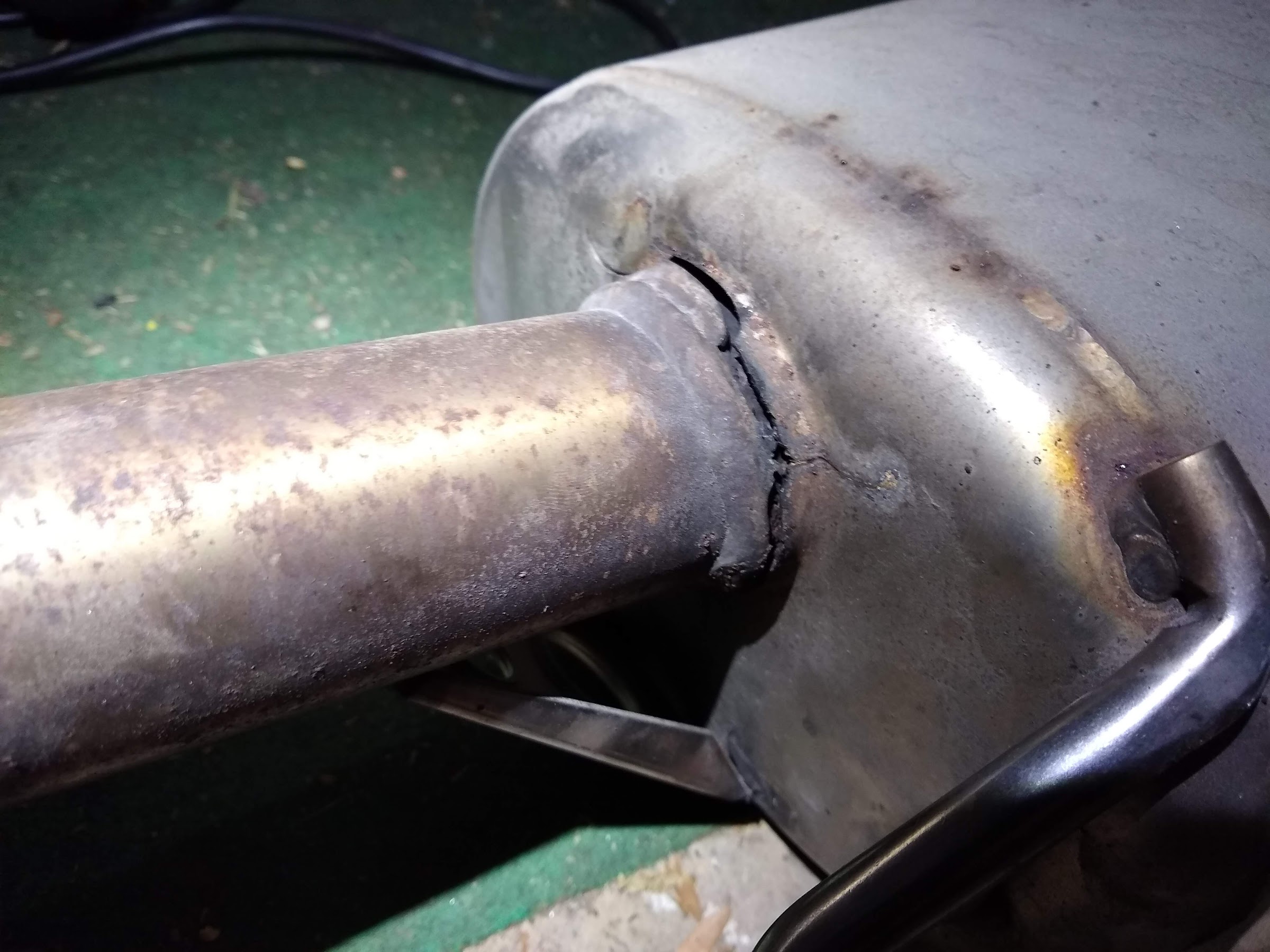 WOW. so sorry to have missed this. Happy to see someone going at it. Yes, definitely keep going. All modding for ANY car is a waste of money etc etc. people who think otherwise are dumb. Do what you do. And, welcome!
D

Mikeyman64 said:
On second though, I may go ahead and buy the CXRacing intercooler kit over at mazdaspeedtuning. Custom aluminum piping, BOV, and if I need a more beefy cooler later I will already have the piping in place.

Anyone have any thoughts on CXRacing's stuff?
Click to expand...

it's ebay stuff. but, there's nothing wrong with it.

So it's been a good bit of time since my last update. Work/school got in the way of smooth progress (as it does), but I have finally put "LC1776" on the ground!

So far so good! With no mods other than the CX intercooler, she runs! and she looks super nice, too. I'll post some pics soon!

So my next step is going to be tuning. I think for now I'm going to upgrade the injectors, figure out an exhaust (thinking probably just the magnaflow at this point, although a buddy of mine might sell me his P5 donor with a blown motor and a Team Moon on it...) and then add an SSAFC to get rid of the nasty. I thought about biting the bullet with a Haltec, but that's so many lightyears away from what I will put this car through for now. Baby steps.

Unfortunately, I think I developed a little valve rattle in the process of test driving (hoping that's all it is). Seems to be only audibly noticeable for now, and intermittent, so I'll probably plan to replace the lifters and seals asap.

Finally, stay tuned for a small garage sale listing on MSP parts. There are a good bit left over that either I don't want, are slightly damaged, or won't fit the P5, such as the trunk lid, rear window, etc. I'll try to make an exhaustive list of things and post it. Pics will be by request only.
T

If you were closer I have a 3" thermal R&D Catback with a PEP (Pope Engineering) 3" DP that I need to get rid of. SSAFC as well (i have to figure out where i put it though). Few other things too. If you are willing to make a drive up to Virginia let me know.

Looks like it's going to be a fun project! If you're into hobbies, they're all a waste of money So let the haters keep hating lol.

TommyBDragon said:
If you were closer I have a 3" thermal R&D Catback with a PEP (Pope Engineering) 3" DP that I need to get rid of. SSAFC as well (i have to figure out where i put it though). Few other things too. If you are willing to make a drive up to Virginia let me know.
Click to expand...

I've updated the main post with new pics of the process. Here is my todo list going forward:


Things left to do:
PR:
- Edit and post hours of video footage of the process...

Cosmetic:
- Either remove door runner strips or add one to new door (or savage door from different P5 with the strip),
- Finish muffler tip cutout (rough dremel work atm)
- Swap driver door (bad dents on lip) and driver fender
- Make decision about front bumper and maybe salvage from different P5
- Paint job: I think I may go with stock Vibrant Yellow, but I may consider the MSP yellow. Have not fully decided.