Whenever doing actual work on vehicles I've owned, I've often depended on being able to place a floor jack centrally under the front or rear of the car and lift the entire front or rear at once so as to be able to place jackstands conveniently and not have the car's frame sitting at weird angles. I'm used to it being easy, too - on a Crown Vic there's a massive frame crosspiece up front and the pumpkin in the rear; on a Cavalier there's the radiator support up front and the L-beam welded between the suspension trailing arms in the rear.

On the Five, though, I'm a bit confused. There's all this plastic shrouding up front, with no metal structural bits exposed forward of the front wheels, leading me to conclude that I've got to somehow get the jack underneath the exposed rear part of the front subframe, which I don't think I can do with my current jack anyway because I selected it for getting big cars at least 24" in the air and it scarcely goes low enough to fit underneath all the low-hanging cosmetic and aerodynamic bits on the Five. But at least I can conceive of a way to do it up front. On the rear, I'm completely clueless. Does the IRS arrangement even have something in the middle that I can slide a jack under to get the tail in the air at one go?
S

Had the same confusion when I was new to the car. There's litterely an "X" on front subframe marked for jacking but it is quite far in. I can get a it coming in at an angle from the side of the front wheel well. Tight quize but can be done with a trolly jack. The rear is super easy.

Silentnoise713 said:
Had the same confusion when I was new to the car. There's litterely an "X" on front subframe marked for jacking but it is quite far in. I can get a it coming in at an angle from the side of the front wheel well. Tight quize but can be done with a trolly jack. The rear is super easy.

Good info there, thanks! And once it's on jackstands it'll be quick work to more thoroughly familiarize myself with the undercar layout. I'll take the liberty of uploading jpegs of the two images from the PDF ....

What is the 170mm the PDF refers to? That the car's structural members themselves are 6.7 inches off the ground? I'll have to go out tomorrow and measure the ground clearance at the front spoiler and/or air dam ... pretty sure the dam, at least, comes pretty astonishingly low for something that's only part sports-car. 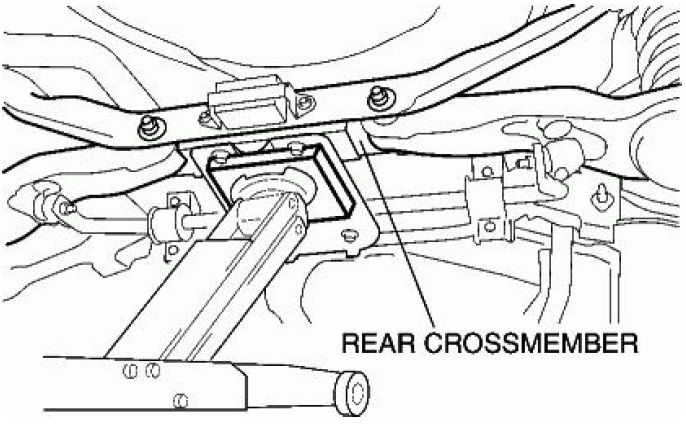 Worked great, got my tires rotated pretty easily. My car doesn't actually have the "X" up front, but the subframe jacking location isn't as hard to reach as I'd initially imagined - and it turns out I can reach it with the jack I have! Pretty neat.
S

1987cp said:
Worked great, got my tires rotated pretty easily. My car doesn't actually have the "X" up front, but the subframe jacking location isn't as hard to reach as I'd initially imagined - and it turns out I can reach it with the jack I have! Pretty neat.
Click to expand...

Sounds like the +'12 has a revised front subframe (or Mazda found another supplier to make it). My previous '08 had the treasure spot marking.
M

Wow I feel dumb, I got a nice new full size low profile jack over a year ago and I was still jacking on the side sills. This will be much easier and better, thanks for posting. Gotta use those 20% off coupons from northern mailing list on a good jack that's already on sale.
W

Hey folks, got an issue trying to get at the solenoid under the rear jack plate. I have a 2013 5 and the bolts were very corroded. I used some PB Blaster and got one nut loose but stripped the other.

So my question is, are there any issues with removing the jack plate itself? I'm not sure if it's just bolted onto the crossbar of if there are any bolts in there. Has anyone removed it?

If I can pop it off I can get to the solenoid far easier.

It looks like it should just be a matter of taking my impact wrench to it but wanted to my sure what I'm getting into. Thanks for any info.

Hello walks,
If you're trying to get the vent solenoid out, there's a hole in the jacking plate you can put a socket extension through, and I got the second nut off with a socket swivel.

I also tried to get that jacking plate off but gave up. I think I got one of the bolts out and there was no problem putting it back.
W

Thanks for the quick reply dougsey. The issue is I stripped the d@mn nut on the forward bolt (w/ 12 pt 10mm ratchet wrench) . If there was no issue for you putting the bolt back on the jacking plate I might give that a go first. I'll put the 5 back up on the jacks and soak the plate bolts with some PB Blaster. I haven't found or visibly seen any welding spots on the plate so I would hope it comes off. Otherwise I might have to punt this one over to my local mechanic.

It's just two bolts on the solenoid!!! GAH! I'll let you know how it goes.
D

If you can just get the old solenoid out (cut it out or cut the frozen nuts off) you could zip tie the new one in place. It's never easy!
W

@dougsey, thanks again. Letting the jack plate bolts soak in PB Blaster for a couple hours did the trick. No issues taking them out or putting them back in. I didn't mess with taking the solenoid off since I don't have the part yet but now it won't be any big deal to replace it. I ordered the solenoid from Rock Auto and should be good to go in a week or so.
Please log in or register to reply here.