Probably too easy, but did you hit the window lock by mistake? I've done that before and it's hard to tell if its engaged or not.
C 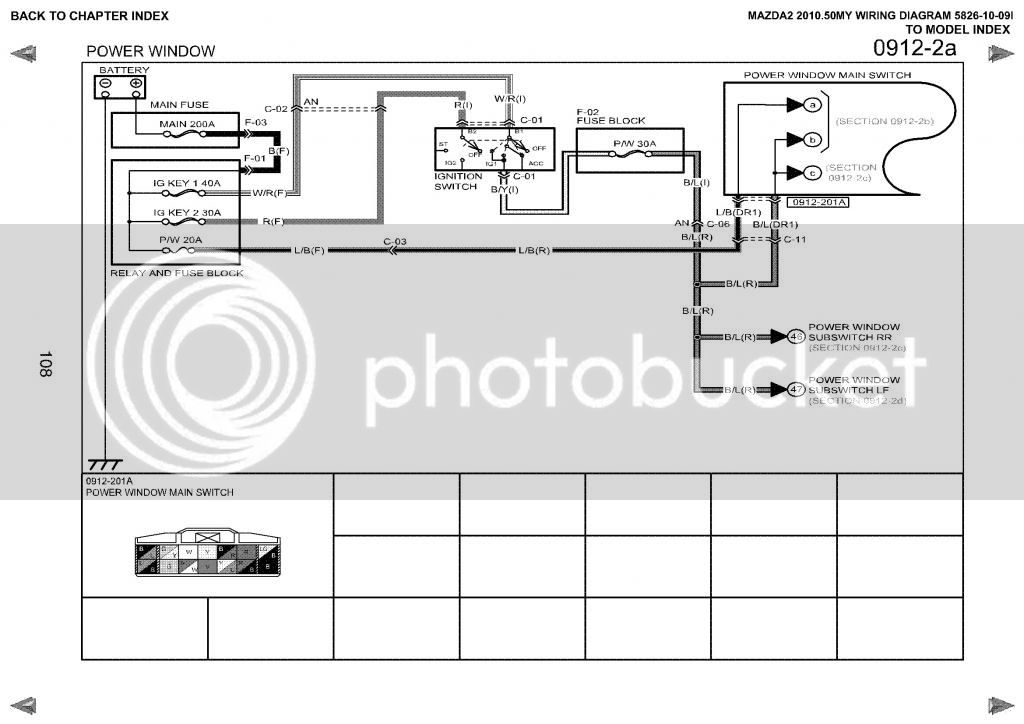 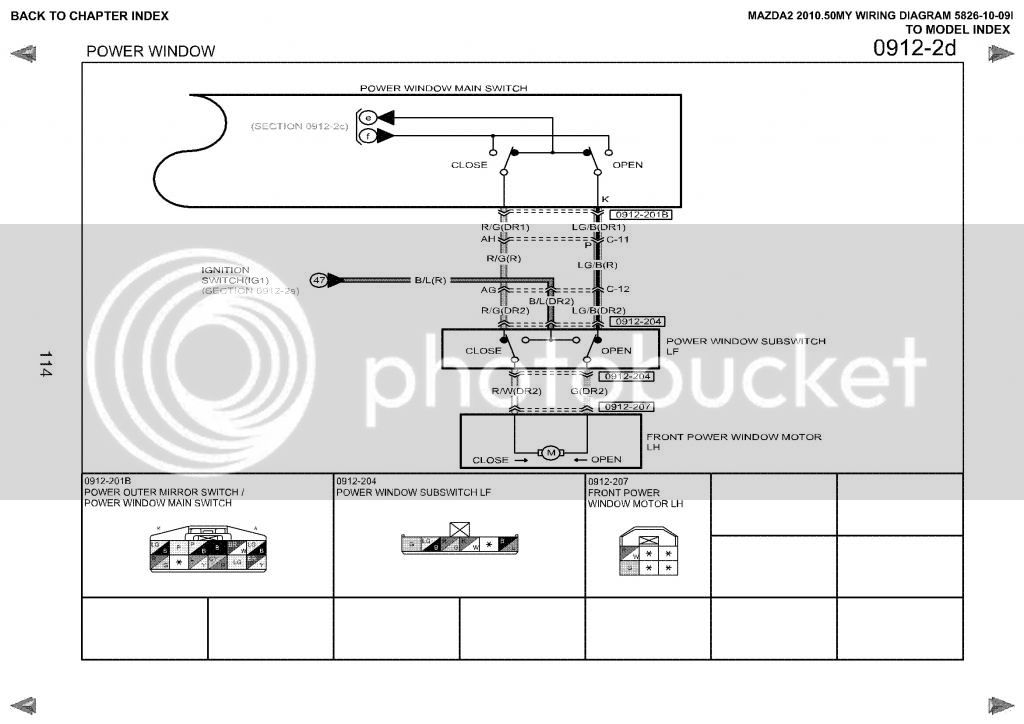 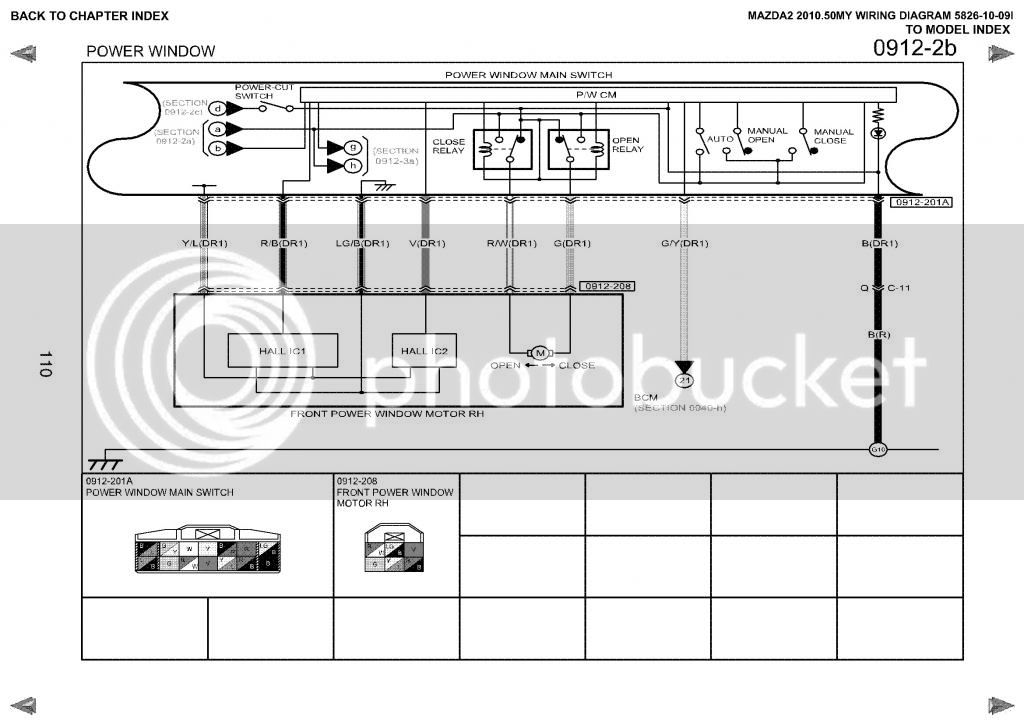 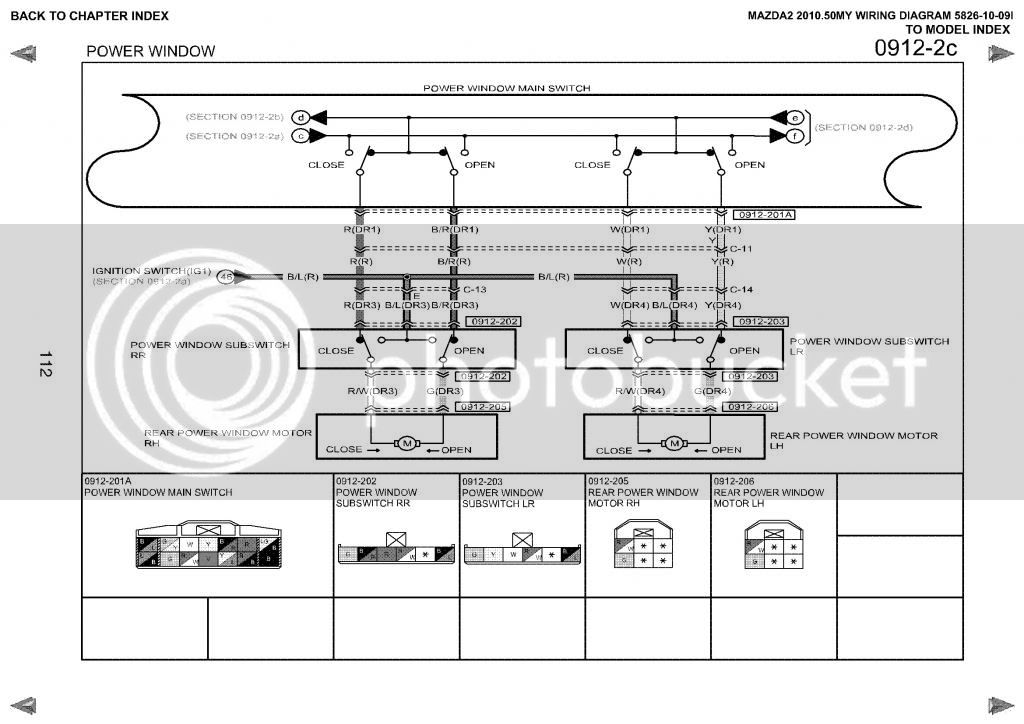 Hey do you have access to the Mazda 2 parts catalog?
F

Those diagrams indicate that power must flow through the driver's switch in order to go through the passenger switch... so either one of those switches failing will cause the window to not work.

To diagnose it I would pull the passenger window switch assembly(keeping it plugged in), and backprobe the red/green wire and the light green/black wire with the meter set to DC voltage. Just sitting there you should see nothing. When you activate the DRIVER'S switch, you should see 12v, both operating it up AND down(it will display as -12v in one direction, this is fine). This is testing the driver's switch and all the wiring between it and the passenger switch. If you do NOT have voltage either way, you need to pull the driver's door switch assembly, you can do some other tests to make sure it has power/ground, but since the other 3 windows work this is basically unnecessary. Replace it.

Now we need to see if voltage is getting through the passenger switch.

Move your DVOM meter leads to backprobing the same connector, but move them to the red/white wire and the plain green wire. Now operate the driver's switch again, you should see the same 12v one direction, -12v the other direction. This should also do the same thing using the passenger switch now(since we're probing AFTER the switch.

Now move further down the wiring to the motor itself. Disconnect the passenger window motor connector and probe the two pins. Now operate one of the two switches, should have power again when probing the red/white and green wires at the window switch too just as above. If you don't look at the wiring between the switch we just verified was good(pass side) and the motor connector.

Assuming you have voltage like we've been getting everywhere else in the system, your window motor is bad.

Now the way I would do it in a hurry when I'm on the clock: pull passenger door panel, probe the window motor connector, check for voltage/ground in both directions(remember both pins are normally grounded when not in use, when a switch is operated it changes one of those wires to 12v+, depending on which it is is what determines which way the window goes up or down). If it has power then needs a window motor, which realistically is the most likely problem. If I found no power then at that point I would start looking at the switches as stated above.

Alternatively, you can also switch your meter to ohms to check resistance, and ohm the two pins of the window motor ITSELF(not the connector), it should probably read between about 0.5 ohms and 4 ohms, if it's something crazy like 1000 ohms+ or your meter says OL(out of limits) then the motor is for sure bad. I always check to make sure the connector has power and good ground too.

Bad ground could be a reason the window motor failed, this is easy to check since the pins are both normally grounded. Set your meter to ohms for checking resistance, put one lead in one of the pins, and put the other lead to a KNOWN good ground. The door striker should be a good one, but to check for sure ohm between whatever you're checking, and the negative battery post... good ground will be under 0.5 ohms, great will be 0.2 and under. So back on topic: ohm from EACH of the window motor connectors to a known good ground, and make sure your resistance is good.


It should go without saying but all of the above tests when checking for voltage, you do with the key in the ON position. The resistance checks can be done key on or off, doesn't matter.

I'll add that wires can ohm out fine, but when you actually load them(like with a window motor!) they could be failing to deliver the power necessary to operate the motor.. though more commonly it will blow a fuse or the window motor will go ridiculous slow. I can go into this if needed but it's very likely not necessary.
K

I have a similar problem with the passenger window on my Mazda 2. However the window will still go down, but will not go up using the passenger switch and will not go up or down with the driver master switch. I used your guide to check the voltage at the different wires. Using a voltmeter there is 12 v at the motor pigtail on the down and 11.20 on the up using either switch. However the driver side switch won’t activate the motor at all. I tried the motor and switch from the back door that does work and got the same results.
Should I replace the master switch?
Please log in or register to reply here.