Reading the forums I noticed a few questions about the aftermarket fascia replacement install, and the fact that there are no wiring diagrams or instructions. For experienced installers, this is probably not an issue as it is probably obvious to the trained eye. For myself however, this was the first time Id done a fascia replacement so it was a bit of a learning curve. I thought Id post some pictures of what I did and how it looked after the install to help others scratching their heads trying to install the fascia. Also, as the new fascia comes with two different wiring looms it is useful to know which one you need. Im still not 100% sure what the second one is for, but I can only assume its for the Mazda's with the Bose pre-amp units. Im not sure so dont quote me on that!

Key learning - Remember to be gentle and take your time! Most of this stuff pops out easily or has screws holding it in. If its not popping out double check you haven't missed something before putting your back into it!

Also - after taking the gear knob off, and removing the trim around the gear lever, pop the knob back on - the exposed threaded steel can scratch the fascia or the head unit as you take it out or put the new one in.

The first part of the upgrade was the removal of the original fascia and head unit. There are plenty of YouTube videos on this so I didnt bother taking photos of it, but the process was:
- Remove the gear knob by unscrewing it
- using a plastic lever, pop the cup holder segment out
- put the keys in, put the car into drive and pull the surrounding fascia and trim out - careful with the wires for the ciggy lighter and the light in the ashtray. (I removed this and replaced it with a 2.1a USB charger) The lightbulb has a clip that you can use a small flathead screwdriver to pop out.
- remove the glove box
- reach in from the side where the glove box was into the back of the centre console and undo the 10mm bolt holding the stereo head unit in place
- remove the two screws at the base of the console fascia
- remove the fascia carefully and as it comes out unplug the wires for the aircon at the base, the antenna cable, and the head unit cable

Now you can put you new head unit in - this is where I spent the most time as the head unit did not fit perfectly, and the mounting brackets were not a great fit either. The auction on Ali Express I bought them off also sent me two left hand brackets I used a drill and file to make the mounting grooves deeper, so each of the screws would fit and hold the brackets in place, and allow me to mount the head unit. At this point, pull all of the white mounting bracket clips off the old fascia and put them on the new one. They should come off easily but take your time so you dont break them. Also, there is a little oval plastic filler which can be swapped over that covers the hole under the aircon dials. It isnt the same colour or texture as the new fascia 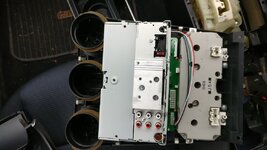 Once that job was complete I pulled the ashtray mount apart and removed the cigarette lighter. This is done by popping a clip inside the lighter itself which allows you to wiggle the lighter out through the front. Once thats done, the rest of the mounting comes out easily. I then clipped the plug in the car off leaving two wires (green\black and brown) and put insulated spade connectors on (they came with the USB plug). FYI the black\green wire is the negative. I also ran the bluetooth mic wire under the dash and up the door to the driver side sunvisor ready for the head unit.

Next I had to create a wiring loom to convert the plug in the car to the new fascia. Here is where you need to do a bit of custom wiring. I used the cable that came with the head unit (a Kenwood Double Din CD\Bluetooth) and spliced that with the cable that came with the fascia. You could use a standard off the shelf wiring loom converter here to connect the stereo to the car, but this will mean the air con buttons and display on the car will not operate. These controls and outputs go through the same wiring loom as the head unit in the car.

To join them up, you need to either solder or crimp connect them - the wires are all labelled and use the ISO standard anyway so its not too difficult. I used a plastic plug\crimp set I purchased from Jaycar to join the two up. Heres what it looked like before installation : 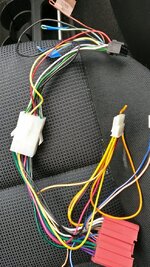 Plug that into the new head unit and fascia - there is a five wire plug which goes into the fascia circuit board and a two wire pink and blue plug which goes onto a two pin plug in the middle of the board.
Heres what that looked like: 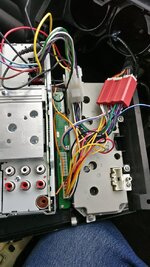 Now it all needs to be installed - be gentle as you do this as one of the wires on the new wiring loom have a tendency to pop out (the two wire pink and blue one). The air con plugs go back into the same sockets on the Air Con controls, and the bluetooth mic wire plugged into the head unit. The wiring loom should plug straight into the available plug for the head unit, and the antenna cable plugs into the head unit. Once all the wires are attached, double check that pesky pink and blue one which may have popped out again. Now gently push it back into the mounting and set it into place - make sure the wires are all tucked in safely behind the head unit and are not caught up on anything. My antenna wire is quite short and it the last thing I plug in before seating it into place. 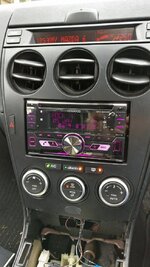 Once thats done you can now reverse the disassembly instructions:
- make sure the fascia is mounted securely and put the screws in at the base
- put the glove box back in (my mounting bolt no longer worked with the new head unit so this was left out)
- plug the cigarette lighter and light bulb back in, and then put the trim around the gear stick back in place
- put the gear knob back on
- put the cup holders back in 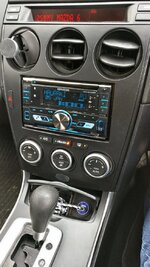 Hope that helps someone - let me know if you have any questions.
Please log in or register to reply here.