I put the poor Mazda to work this weekend, moving a storage unit to a new workshop space!
It started out a bit frosty... (it's nothing compared to you guys in north America, but it's cold enough for me!) 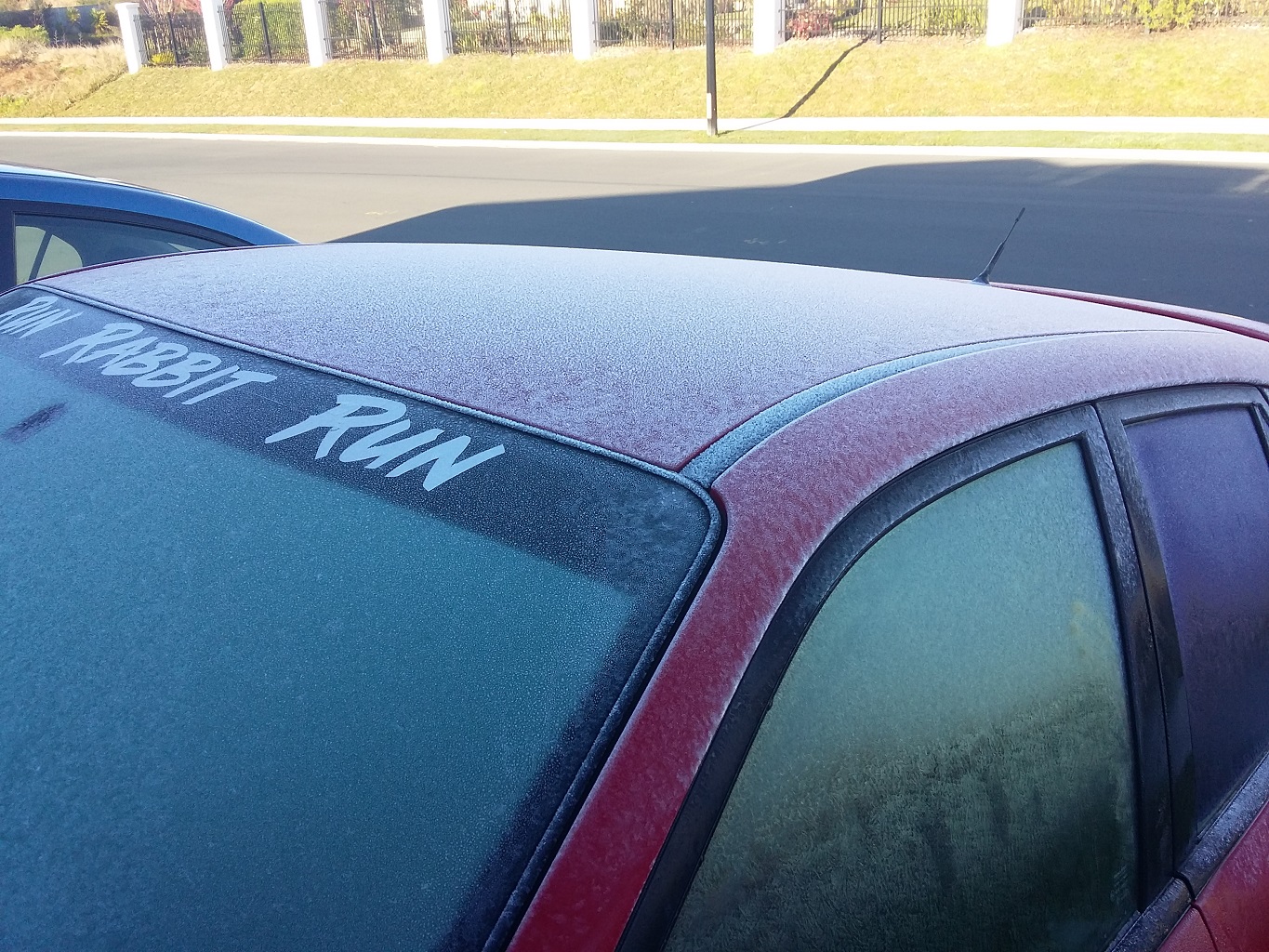 then it was 5 carloads of tools, projects and materials, this is part of the reason I love this platform, it's so versatile 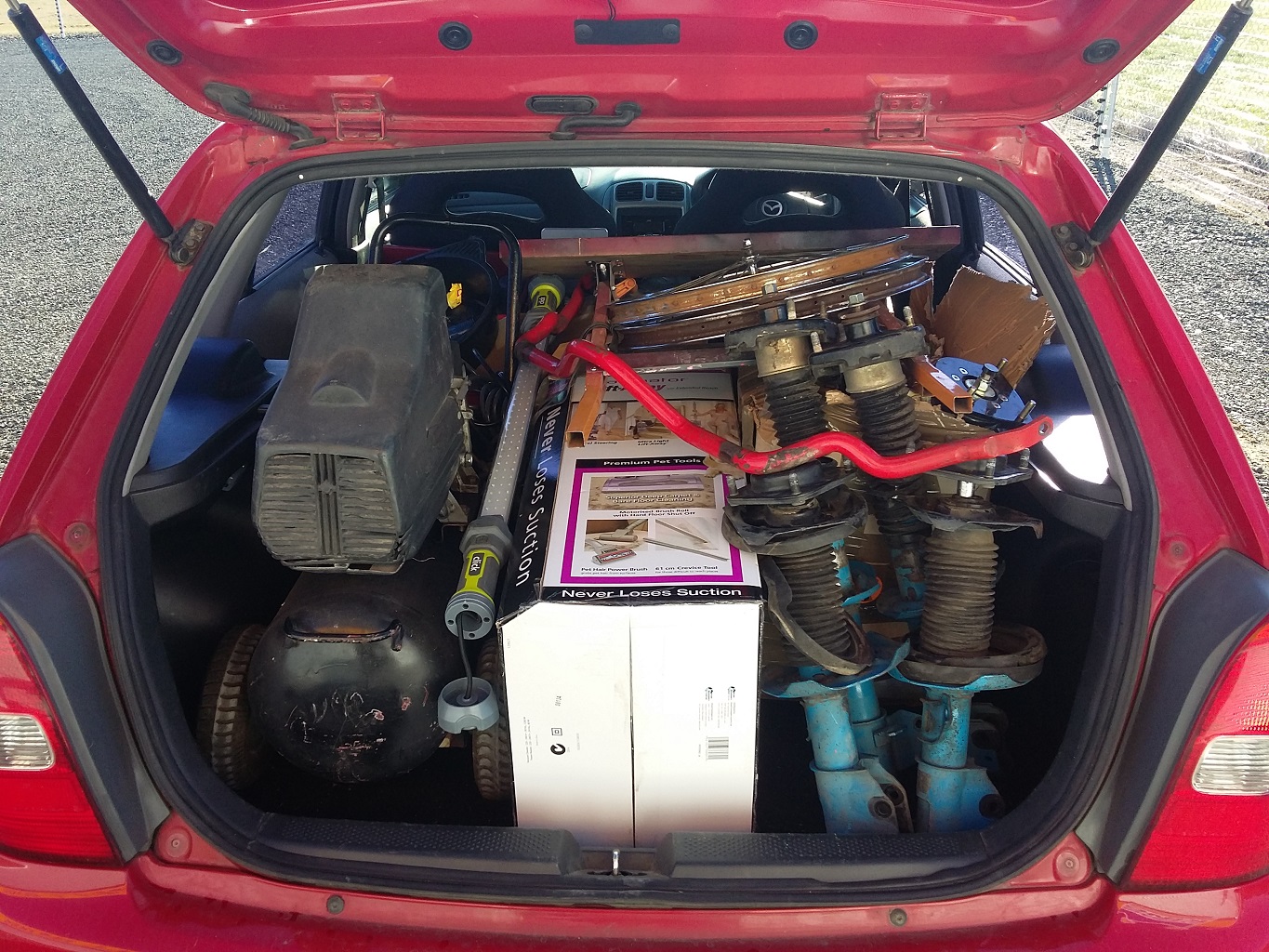 All moved in, and all done with the mighty P5. This new space measures 3.4x7.8M, with a super high roof. It's got power and lights, plus I can build a mezzanine if I need more space.
I'm super hyped to finally have a decent work space, not just for the car, but for bikes, furniture, or anything else that takes my fancy. 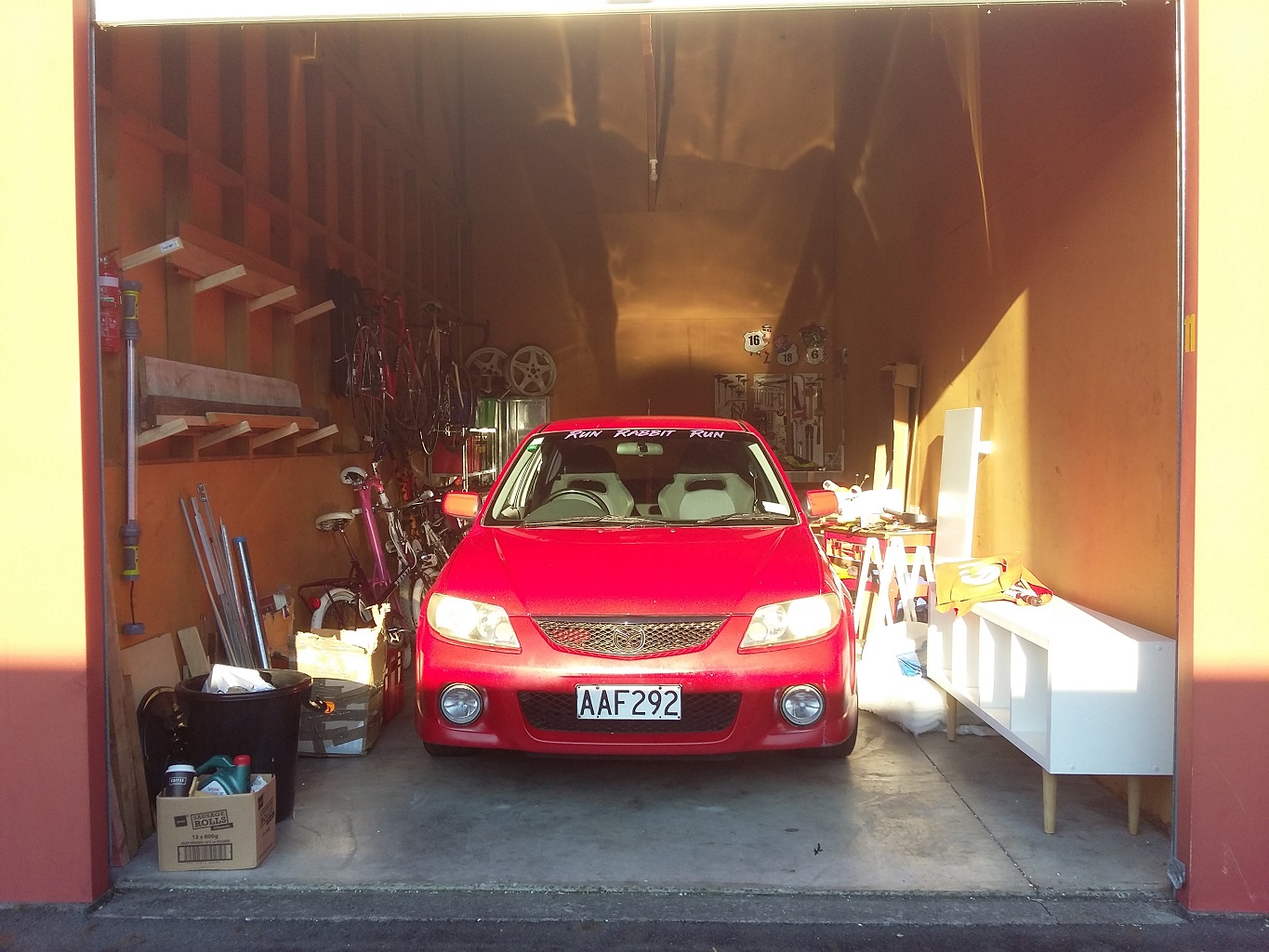 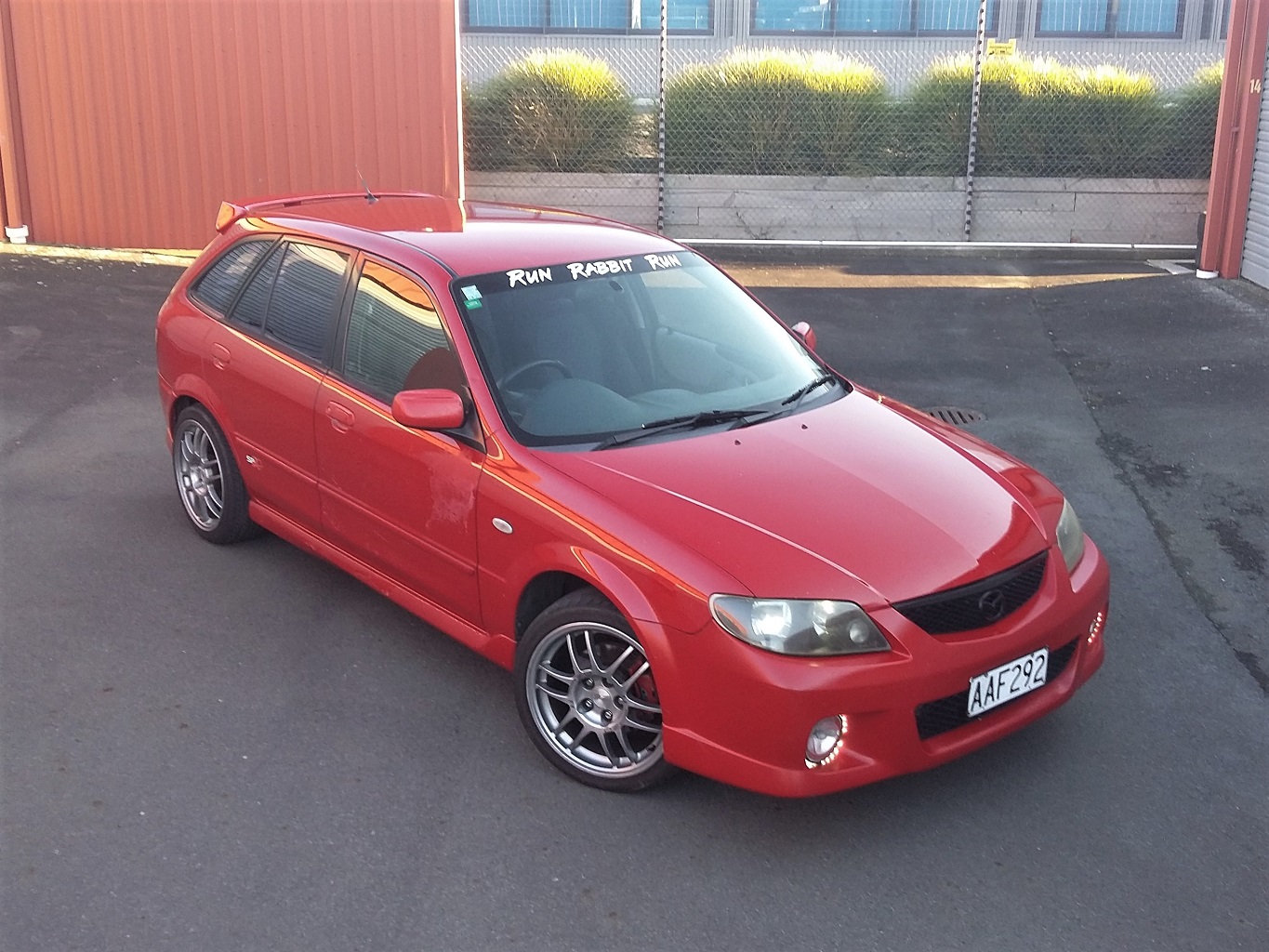 Sweet garage space! All the room in the world to lose some 10 and 12 sockets in lol

Do you think you'll ever have to build a mezzanine? Shoot, I probably would just because that would be a cool feature. You could hang a light from the underside of it for better visibility of your engine bay, or something.
L

Yep, there will be a few offerings to the socket gods in here!

Does anyone know if there are any common leak points in the rear hatch?

Where else should I be looking for a leak?

Man my tapatalk app keeps unsubscribing me from everyone's builds, I was so far behind. I can't wait to see more progress. When I pulled my bumper I found these breather flaps, mine didn't seem like they sat real tight. Other people have had their hatch seals leak, roof rack might be another possibility. I have a constant puddle in my rear wheel wells and my rack leaks right on my left leg and face depending on how I'm sitting. Some people have drilled holes in the bottom of the wells to let it drain, but then there's the rust issue. I would sit in the hatch and have a buddy pour water from the top of the car running over the hatch seals. Then just watch for drips[emoji106] 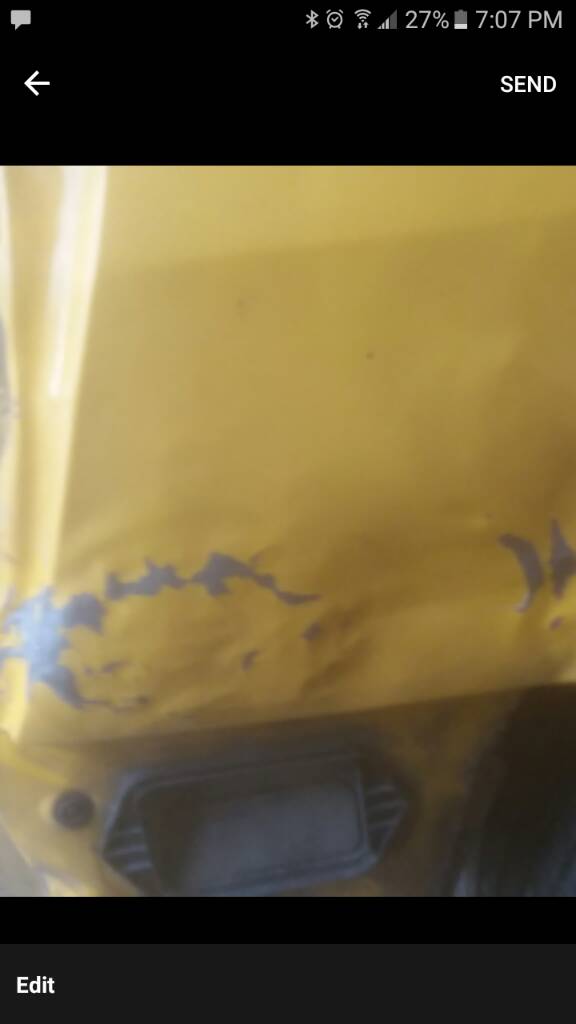 Thanks StudMuffin, the area around that vent looked dryish when I checked last night

I think I found the bugger, there is a body seam just under the taillight that was weeping water. I've put some sealant on both sides so hopefully that'll fix it. I need to grab a decent caulking gun to do the light and vent seals on the weekend 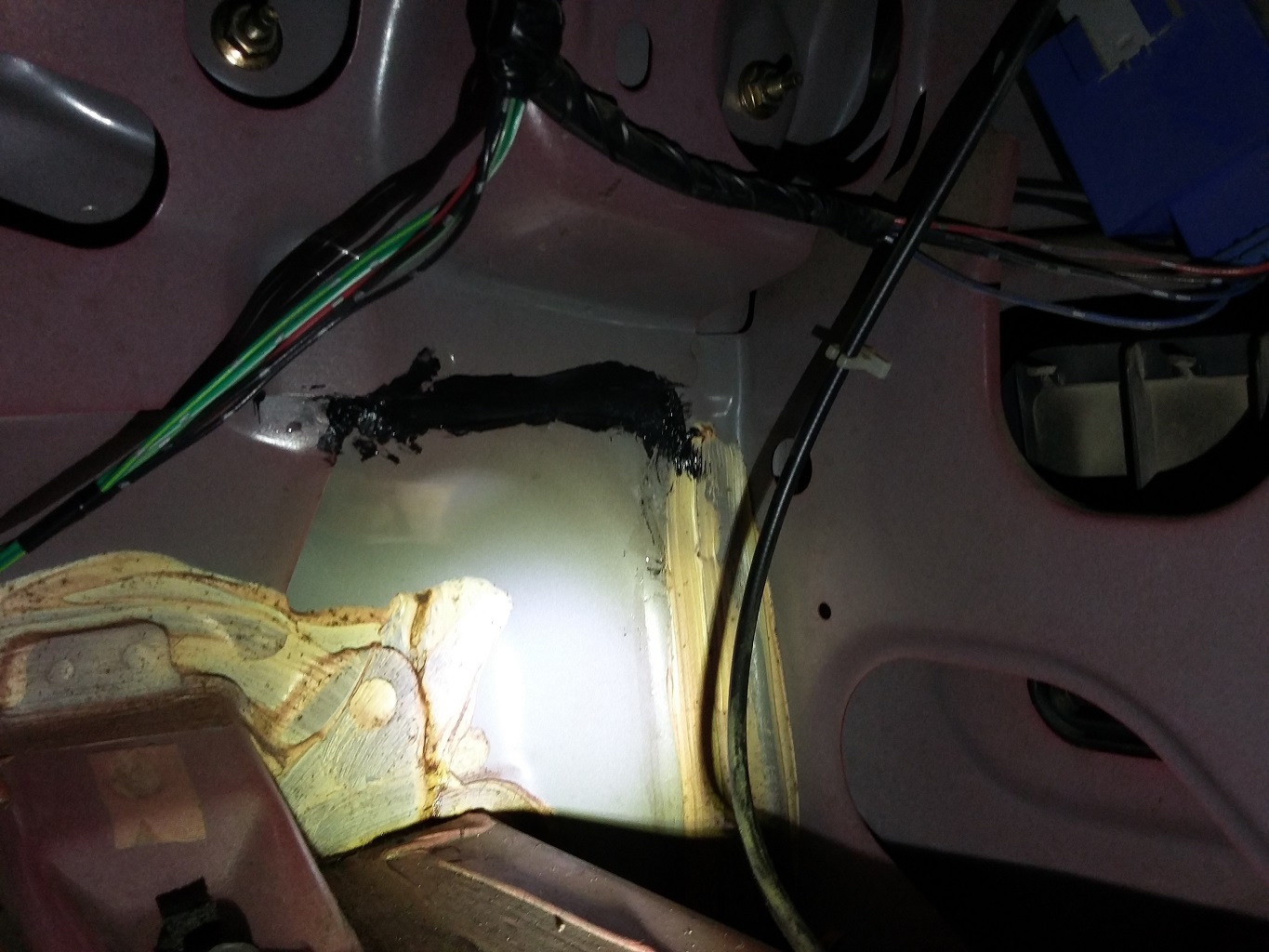 Driving around with no rear interior is getting me excited about pulling everything off and getting stuck in to the supercharger project!


Next question, those with boosted engines, what did you do for crank case ventilation/ breathing? My current plan is a catch can from the valve cover vent but I'm sure there must be a better solution. If anyone has a suggestion or idea, let me know!
Last edited: Jul 17, 2019

LankyKiwi said:
Thanks StudMuffin, the area around that vent looked dryish when I checked last night

I think I found the bugger, there is a body seam just under the taillight that was weeping water. I've put some sealant on both sides so hopefully that'll fix it. I need to grab a decent caulking gun to do the light and vent seals on the weekend

Driving around with no rear interior is getting me excited about pulling everything off and getting stuck in to the supercharger project!


Next question, those with boosted engines, what did you do for crank case ventilation/ breathing? My current plan is a catch can from the valve cover vent but I'm sure there must be a better solution. If anyone has a suggestion or idea, let me know!
Click to expand...

Just wait till you really get into gutting it. It all seems fine first, then you start to notice the little things. The mismatched paint, the rust you didn't think was there, pretty soon you'll be sanding and painting away. The car feels allot better gutted out but I miss my armrests and being able to hear the person next to me above 2k rpm lol, I'd keep your door cards unless your getting really serious. Oh and those plastic interior kits work wonders on all the plastics, I started with a flathead and it's much slower going
L

Yep, having no interior was great, but very noisy! Chucked everything back in for now, will keep an eye on the pockets and spare wheel well but I think I've got the major leaks fixed.

Got the AC system degassed and removed all the components today, this is the first real step on the road to supercharger whine! 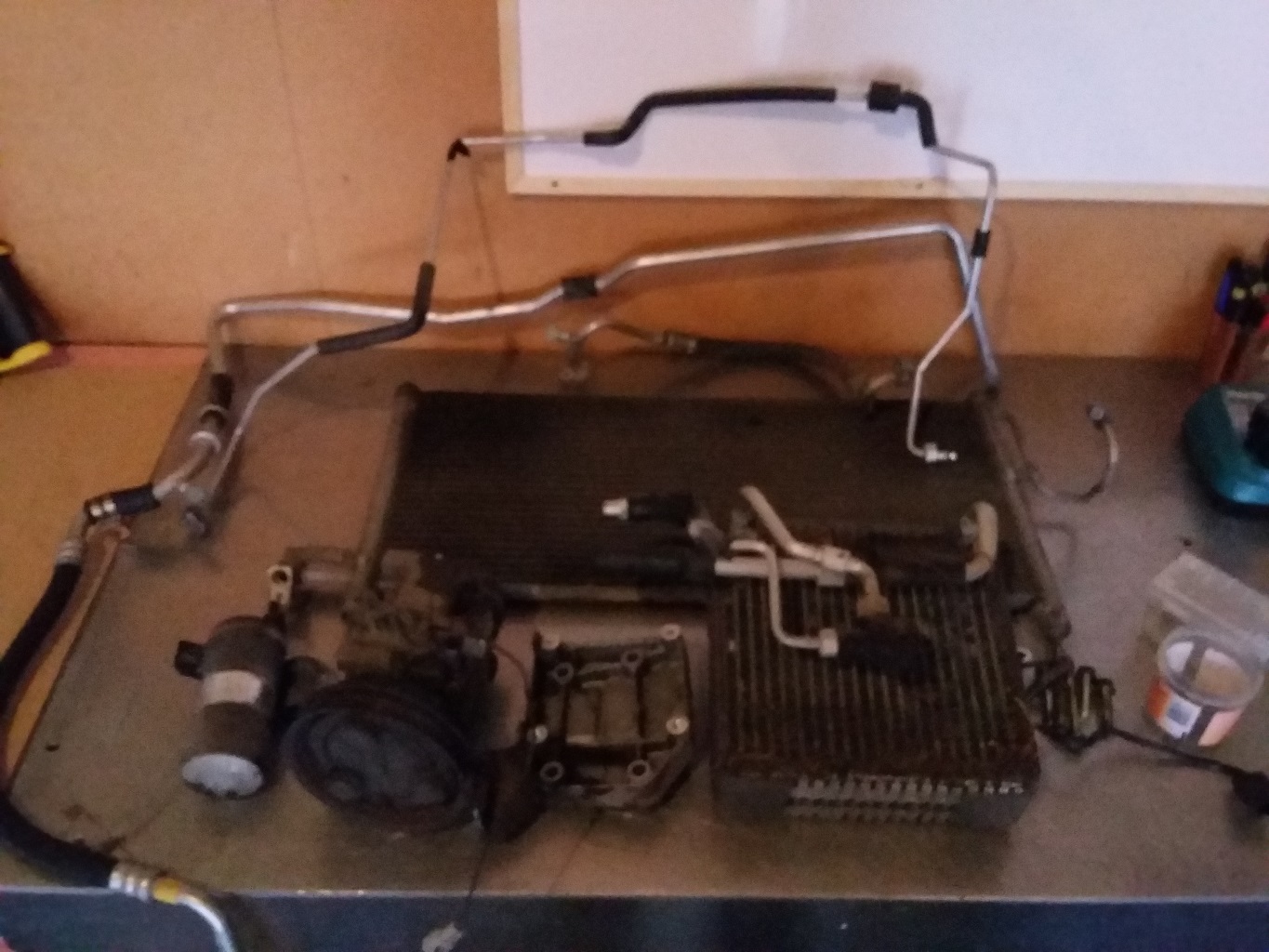 All of this nonsense is out of the way now! Only 2 casualties, the big low pressure line that runs from the interior to the compressor had to be cut as it's all one piece and there was no way it was coming out without a fight. And the plastic strip that runs below the glovebox got cut because no amount of swearing and wiggling would get the AC box out with it in the way. 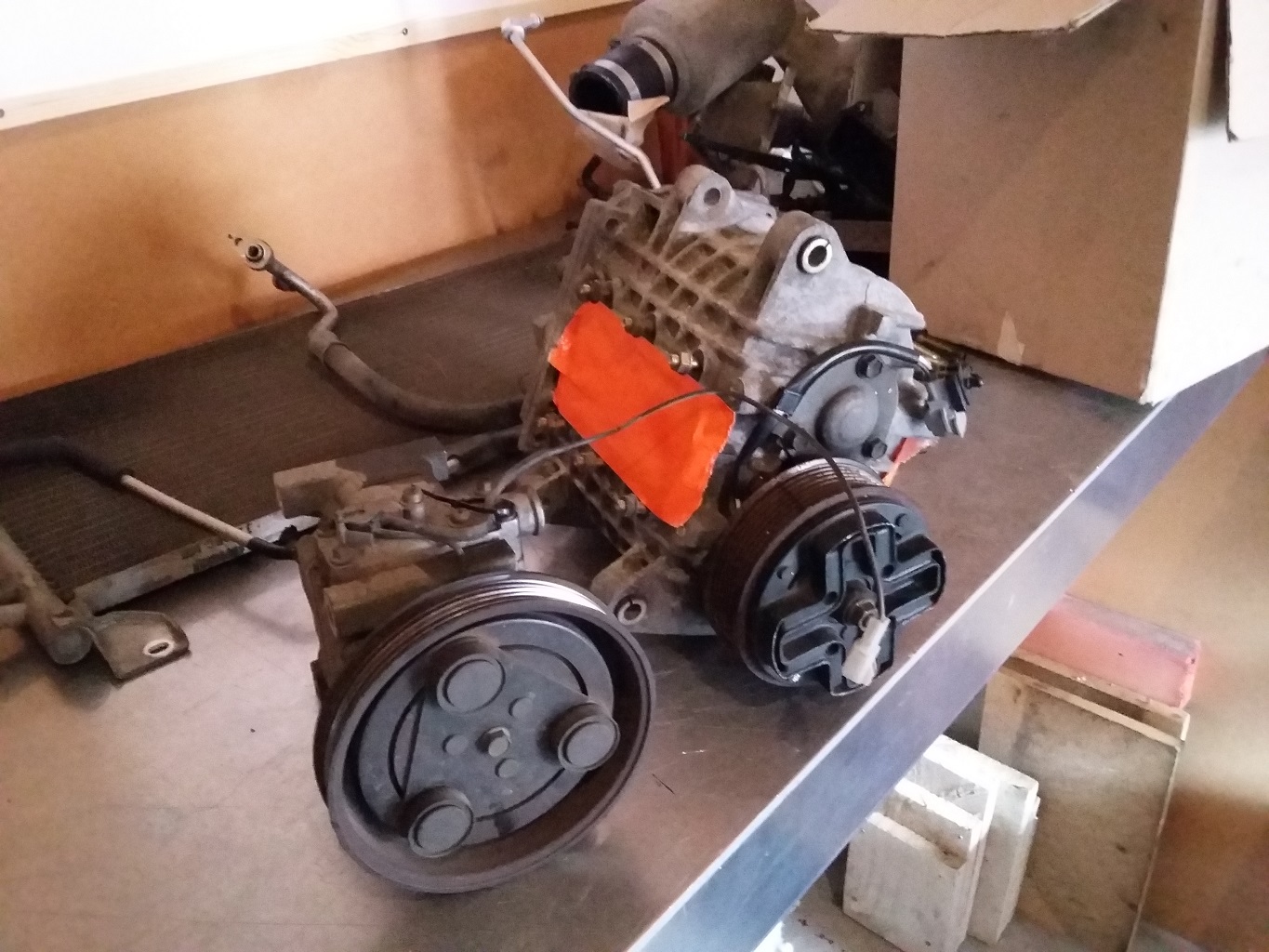 A quick size comparison between the AC compressor and the supercharger. 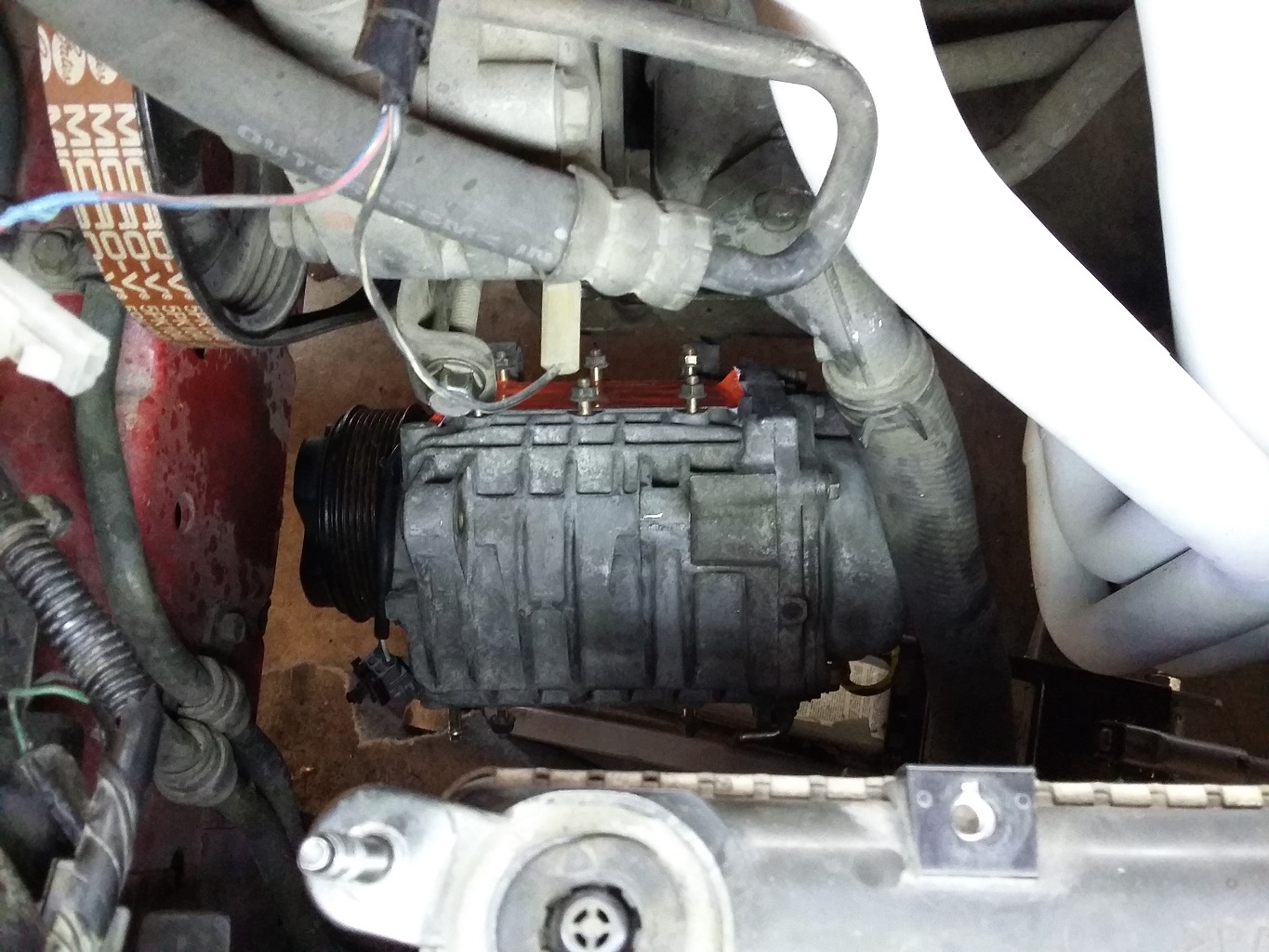 It's tight! The radiator hose will have to be rerouted, and I'll lean the charger over more but it should clear the extractors and the rad fan just fine.


Next up is figuring out a mount system for this thing...

Dude I'm so hyped for this, are you gunna do ITB's? Do you still planning on rallying it after supercharging?
L

So am I! Really looking forward to getting stuck in and fabricating all sorts of stuff for this car. I can't do too much more until I find a daily driver though...

Intake will be stock for now, no need to go to crazy modding that area just yet. It might get a port and polish in the future.

Definitely will try a few more Gumboot rally runs, I missed the last one and will probably miss the next one (6 monthly event) unless I pull finger and get everything done on time. I'd love to get the old girl on a track at some point too.

Having a daily really helps with how much you can tinker, it goes from " this needs to be done tonight" to "eh, I'll finish that tomorrow" haha.
L

Guess who didn't grease their caliper pins and now has a stuck drivers rear caliper?...


This guy! the lower pin is properly stuck in the caliper, I can turn the caliper but it's just loosening the pin from the carrier, not breaking free of the caliper body.

Thankfully everything works fine, it's just wearing through the inner pad quite quickly. Trying to decide on grabbing a standard caliper or finally upgrading to 626 rear brakes...

Oh man, these damn calipers. I just put in reman rear calipers and it doesn't feel like they are even engaging, plus I can hear my drivers side dragging at low speeds. I really want to swap all my brakes over, hopefully you can get a deal on some used calipers and brackets for the swap
L 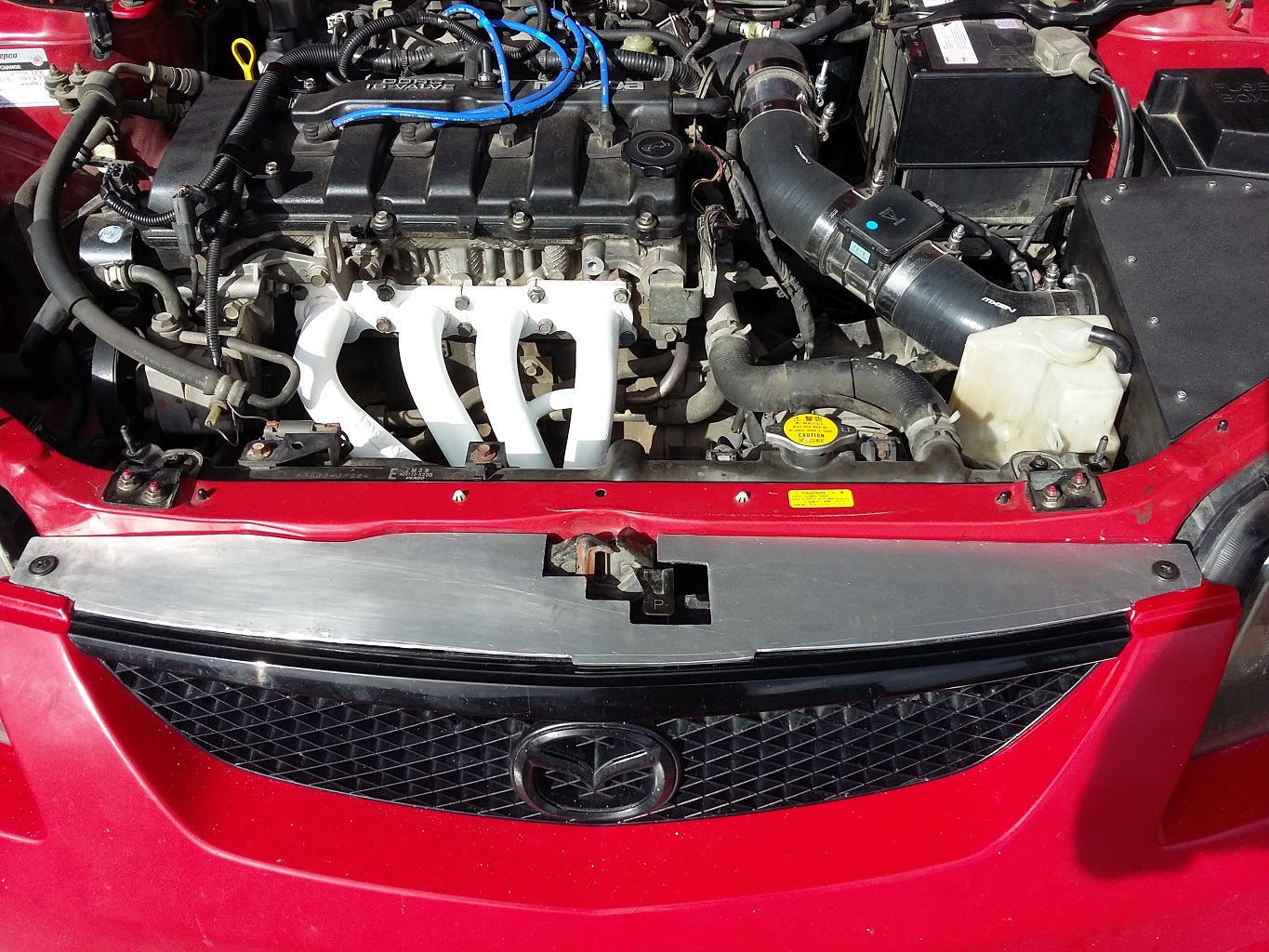 Whipped up an alloy grill panel to try and tidy up the engine bay, it's painted plain black for now, Once it gets sunnier and warmer here I'll hit it with some wrinkle black to match the valve cover and airbox 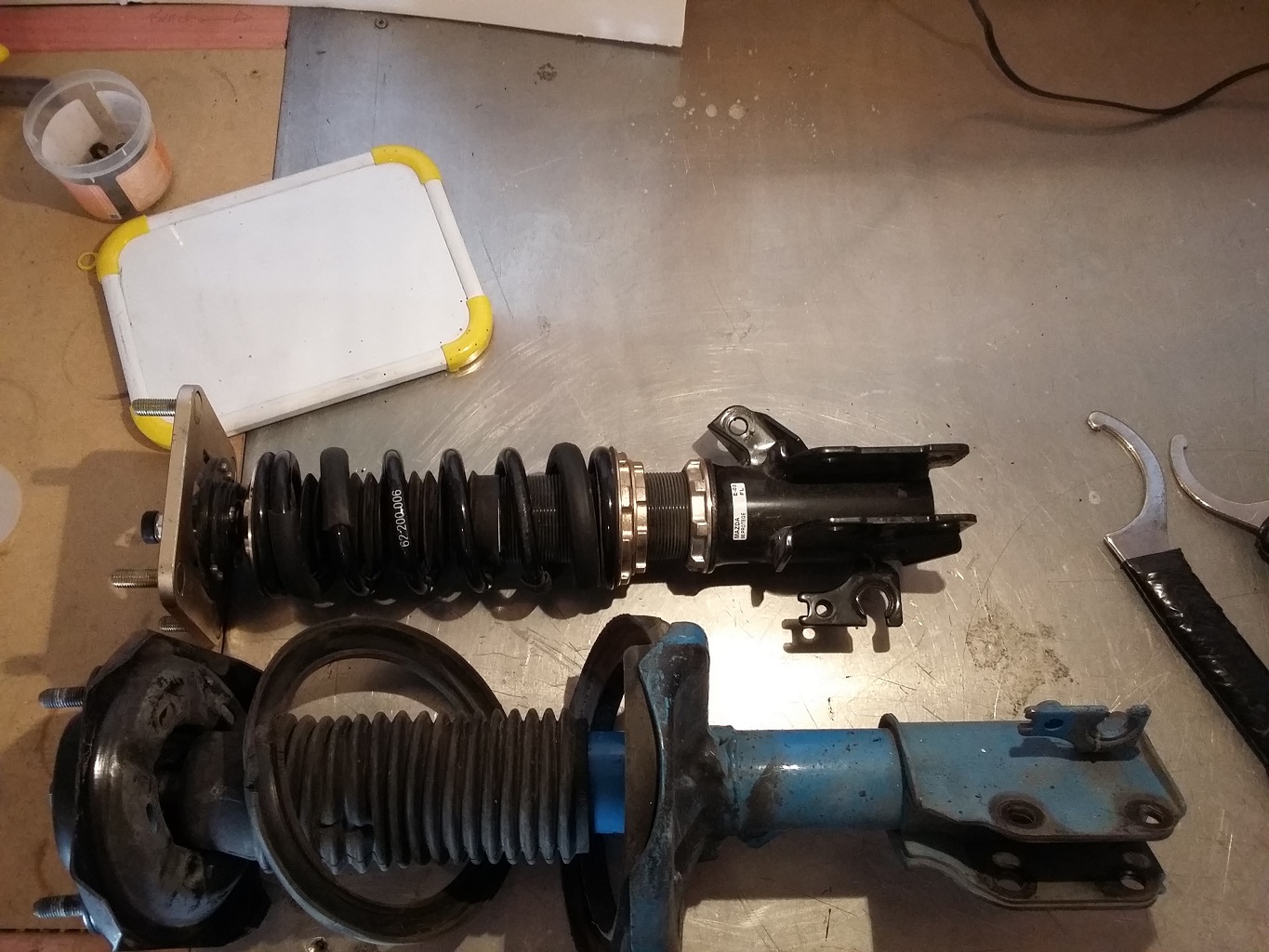 Messing around with the second hand coilovers, the previous owner must have had their car absolutely slammed! They're 120mm (5 inches) shorter than the tokicos, it'd put the front guards directly on the lip of the wheels lol. I kinda want to see what that would look like but I don't think I'd be able to get the car off the jack!

The rear caliper is still stuck, haven't had the time or motivation to go hunt for a replacement yet, plus there's a new clunk up front and the steering squeaks at low speeds, it seems like the next round of repairs is almost here.
The search for a daily driver continues. I'm being a bit picky and want a Mazda Demio as they're small enough to be really economical, yet big enough to carry a bicycle inside. 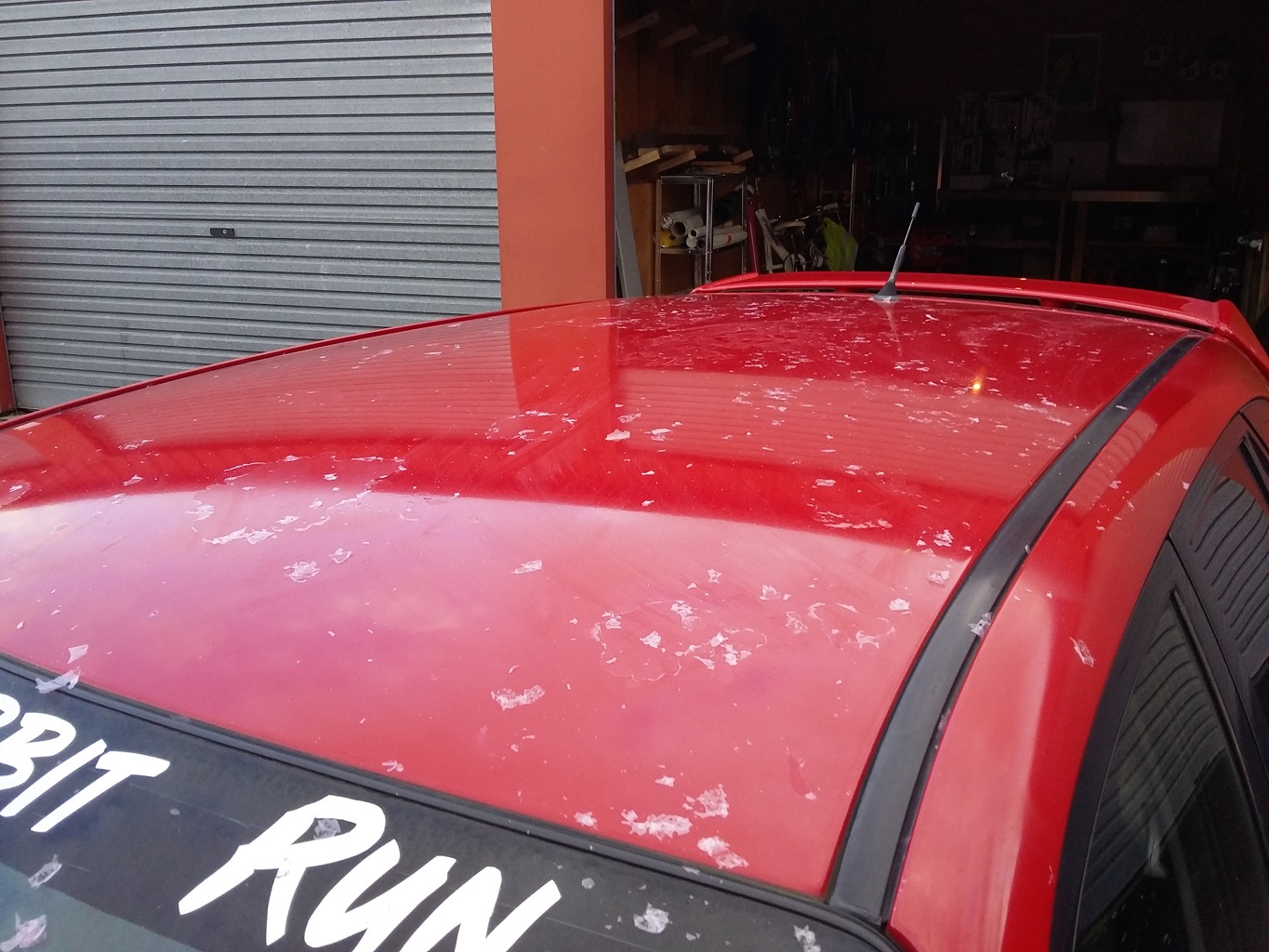 The really heavy rain lately has caused the clear cost on the roof to bubble up and peel like a sunburnt Englishman. Red paint strikes again!
Last edited: Aug 11, 2019
P

STudMUffin1177 said:
Oh man, these damn calipers. I just put in reman rear calipers and it doesn't feel like they are even engaging, ...
Click to expand...

I remember one guy had the same problem and it was because he couldn't get the calipers fully bled.

He removed the caliper bracket bolts and rotated the caliper to the top of the rotor so that the bleeder screw was at the highest point.

That allowed him to get the last of the bubbles out of the system and his rears felt way better.
L

Not being content with owning 1 Mazda with dodgy red paint, I've gone and bought another! 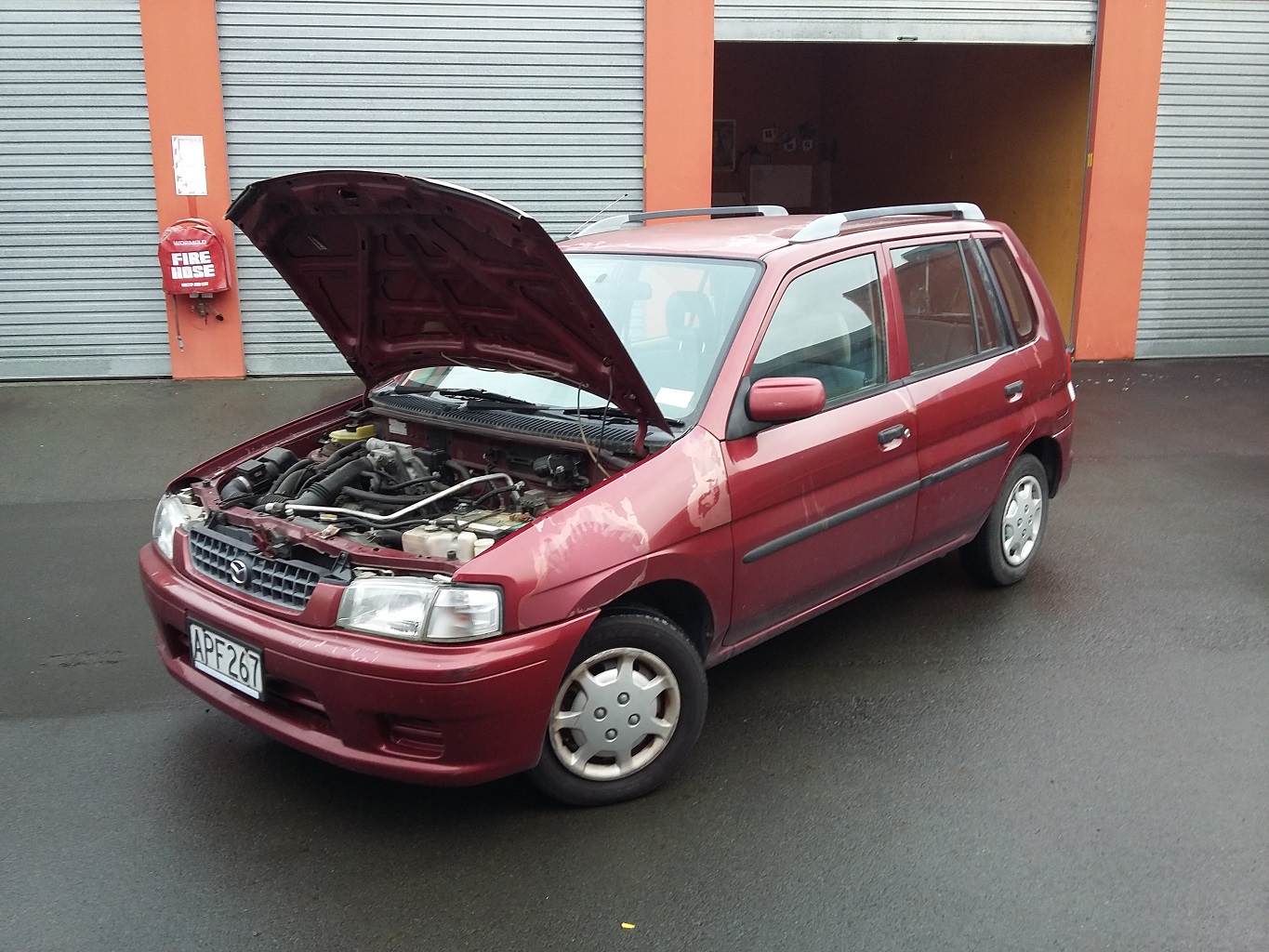 This little nugget is a '97 Demio. Absolute base model with a 1.3L motor and a 4 speed auto. It's cheap to run, easy to drive and has heaps of room in the back. It needs a service and maaaybe a cambelt, the paint is ruined (thinking of wrapping it) but it runs, drives and stops reasonably well

It cost $870, Road legal, registered and with a bit if petrol in the tank as well!

Hell ya brother, I really miss my cheap beater of a truck. Having a daily to thrash around made me feel allot better than thrashing the wagon with no backup haha

Nice that you have a secondary beater now. Sometimes, you don't want to haul parts for your project car in your project car. I scratched off a part of my rear window's aging tint on accident when trying to stuff WRX seats in my car last year :^(

Heck yeah, having a daily means I can tear in to stuff and still get to work, plus the daily mileage was starting to take it's toll, there's a few extra rattles and leaks to deal with now!
L

Speaking of tearing in to stuff, here's some actual progress: 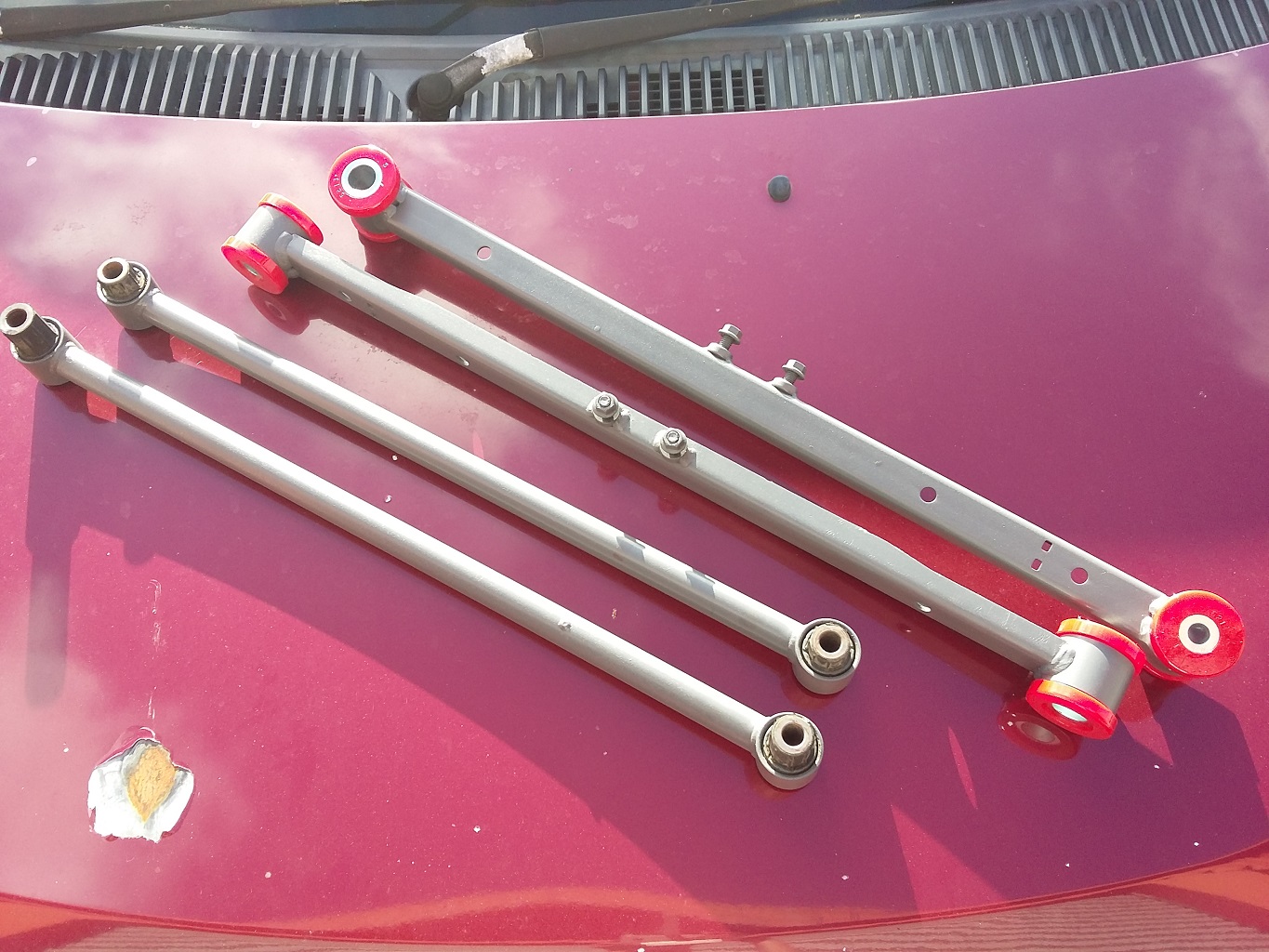 Got the rear trailing arms out, painted and installed the Nolathane bushes, painted the control arms as well (can't seem to get replacement bushes for these)

Getting the old bushes out of the trailing arms involved a whole bunch of drilling, cutting and swearing, but they put up less of a fight than I was expecting
Also got another drivers side caliper on the way too 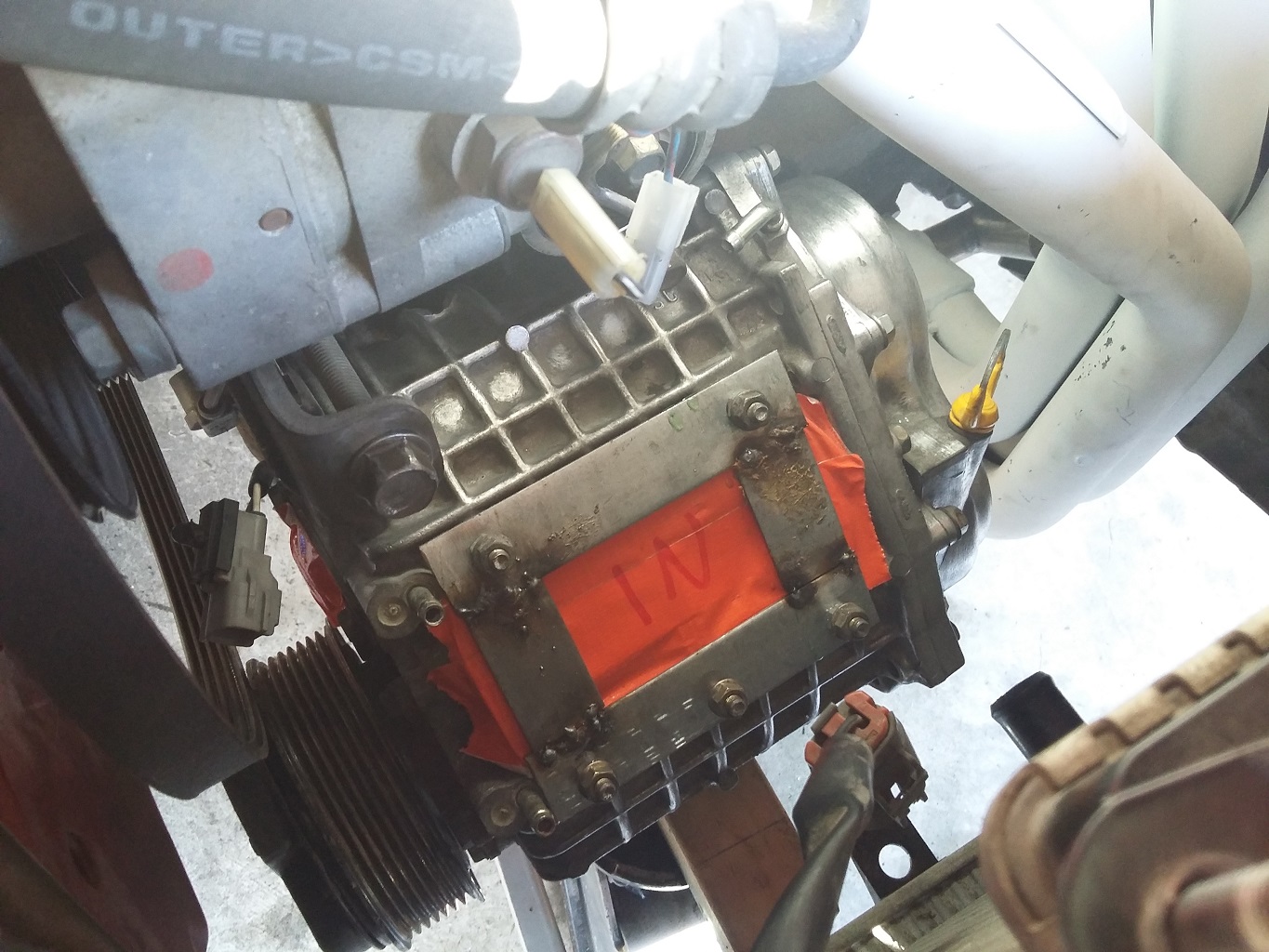 Got the lower radiator hose out of the way to test fit the supercharger, I think this will be the best position for routing piping and keeping everything out of harms way.
The flanges on the intake/exhaust are my temporary, mock up versions for setting up piping and mounts, the proper flanges will most likely be plate alloy 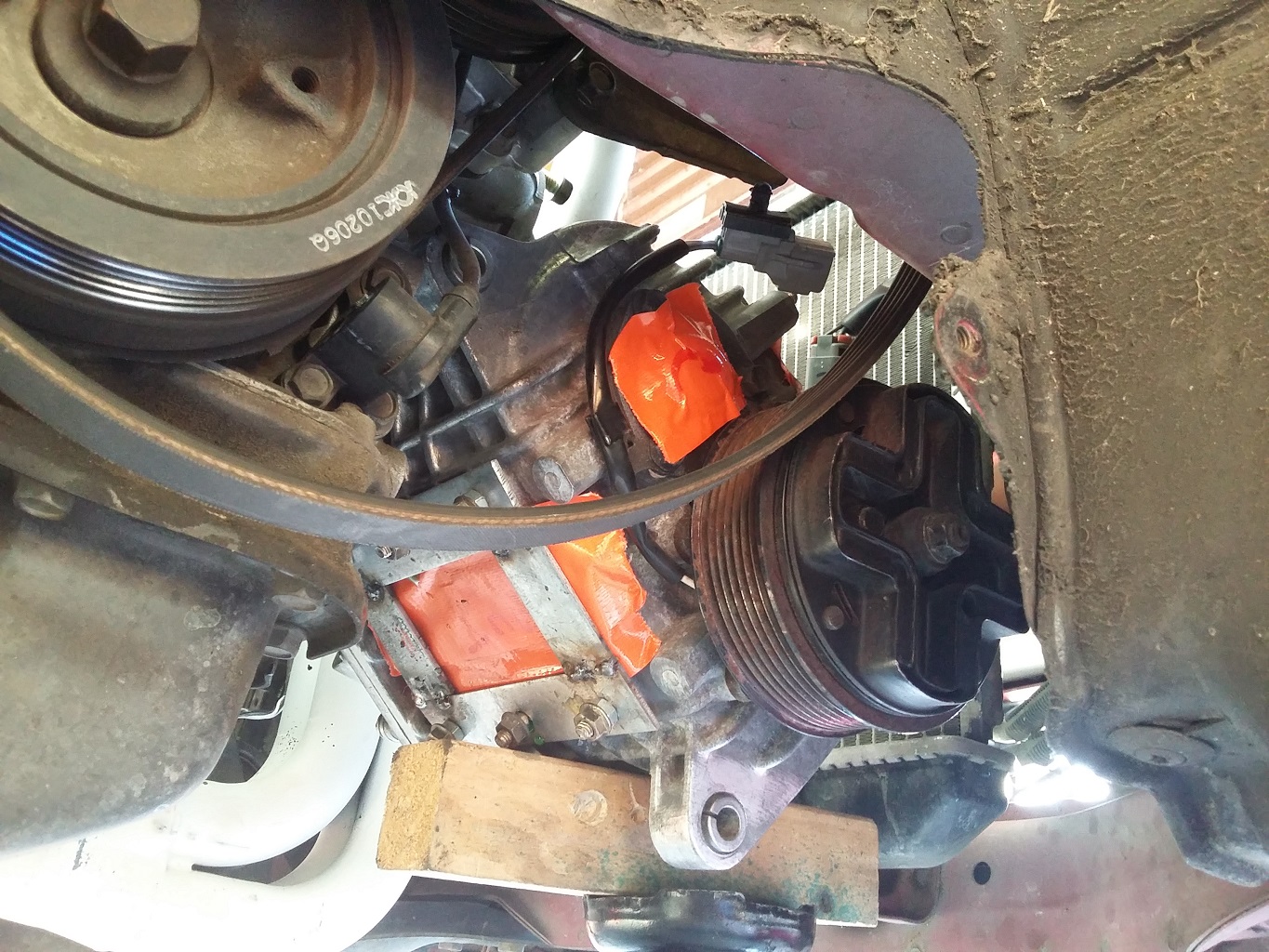 From below, making a bracket is going to be fun, might have to do something a little weird and mount off the outlet flange but we'll see what happens 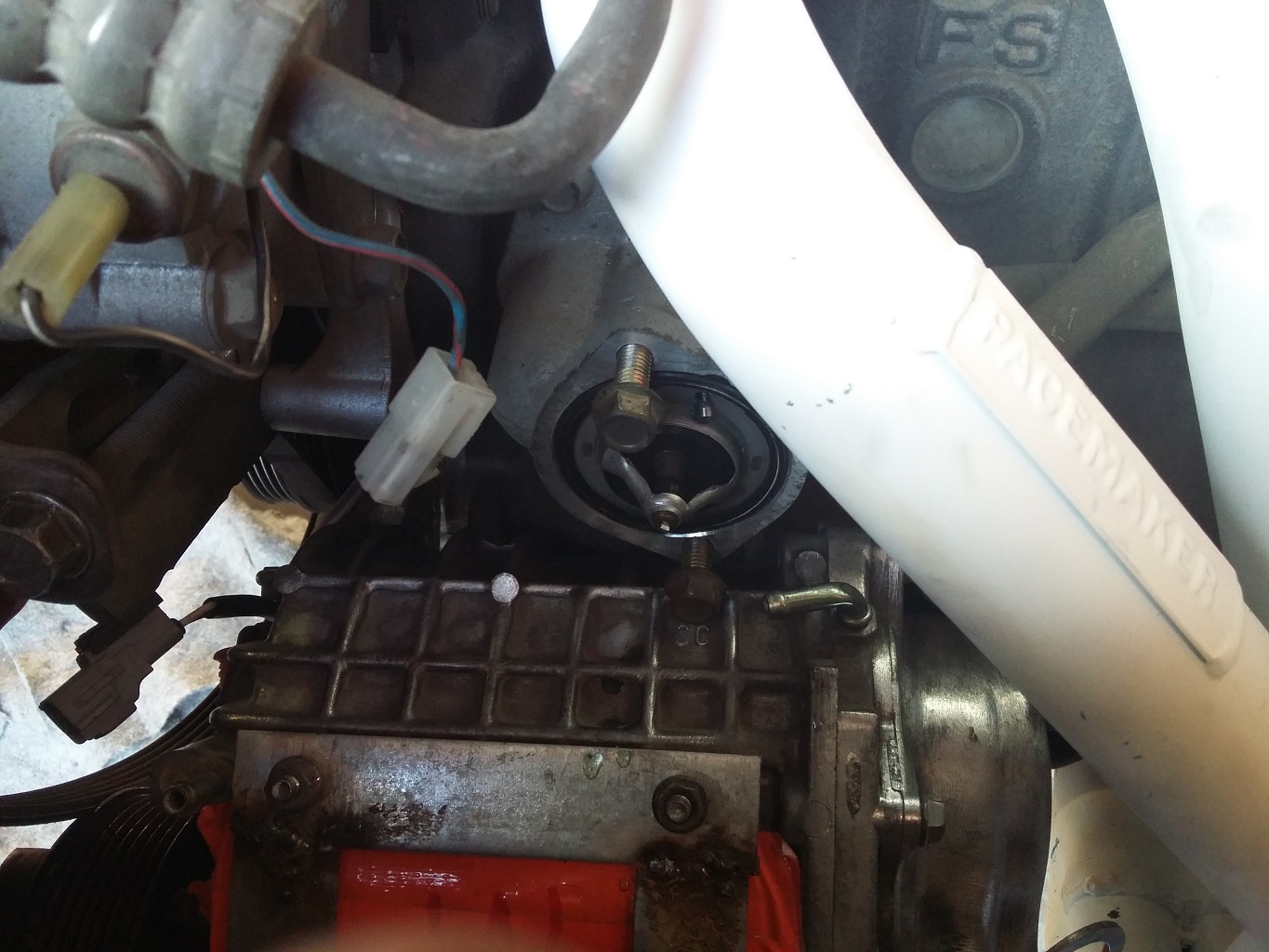 This little guy might be a problem, ideally I'd grab a housing with a neck that points straight out or heads towards the exhaust rather than the factory one that points down at about 45 degrees, right in the way!

Does anyone know if Mazda thermostat housings are fairly universal? Hopefully I grab a miata/bounty/demio/ neck that will work a bit better here.
Please log in or register to reply here.