Welp, the entire country is in lockdown, minimum of 4 weeks at home, no travel except for essential needs. See you in a month!

Thanks! Can't wait to get back to the shed and get stuck in to this again (Soon, hopefully)
N

Woah I don’t know how I’ve missed this build. Must be because I thought build threads were dead. Love the car man if you’re ever interested in selling the spoiler let me know haha. Do you have an Instagram? I’d definitely like to follow
L

Thanks Nemo! Build threads are a dying breed unfortunately, but there are some still kicking! No instagram for me sorry

This lockdown is nearly over, hopefully next week I can get back to the shed and get cracking on this car again, here's an updated to do list:

- Finish brake install, new disks and pads all round, fresh fluid and bleed the whole lot
- New engine fluids
- Repaint the valve cover, rad panel and intake box wrinkle black
- Remake the supercharger inlet and outlet manifolds, bribe the boys at work to weld them up properly
- Get a bov and piping to finish the cold side intake (Intercooler - throttlebody)
- Re wrap the engine bay wiring harness and do some tucking/tidying
- Get a microsquirt unit and wire that in

That should keep me out of trouble for a while, it'll be the bulk of the work done and should get the car running again. No doubt there'll be some surprises along the way!

Nice man, I'm looking forward to your wire tuck. If you could snag a couple pics that would be awesome. I gotta swap out all my crusty vacuum lines and was gunna try some tucking while I was at it
L

- Exhaust system painted and reinstalled with the last few leaks plugged
- Rear brake pads and disks in and adjusted (What a major PITA!)
- Microsquirt and sensors ordered and on the way
- Gas strut hood stays mocked up on the daily (broke the struts unfortunately, need to get replacements through work) Starting to sort the engine bay wiring by stripping off the old brittle tape and split tubing, I saved as much as possible for reuse later on, gotta recycle! 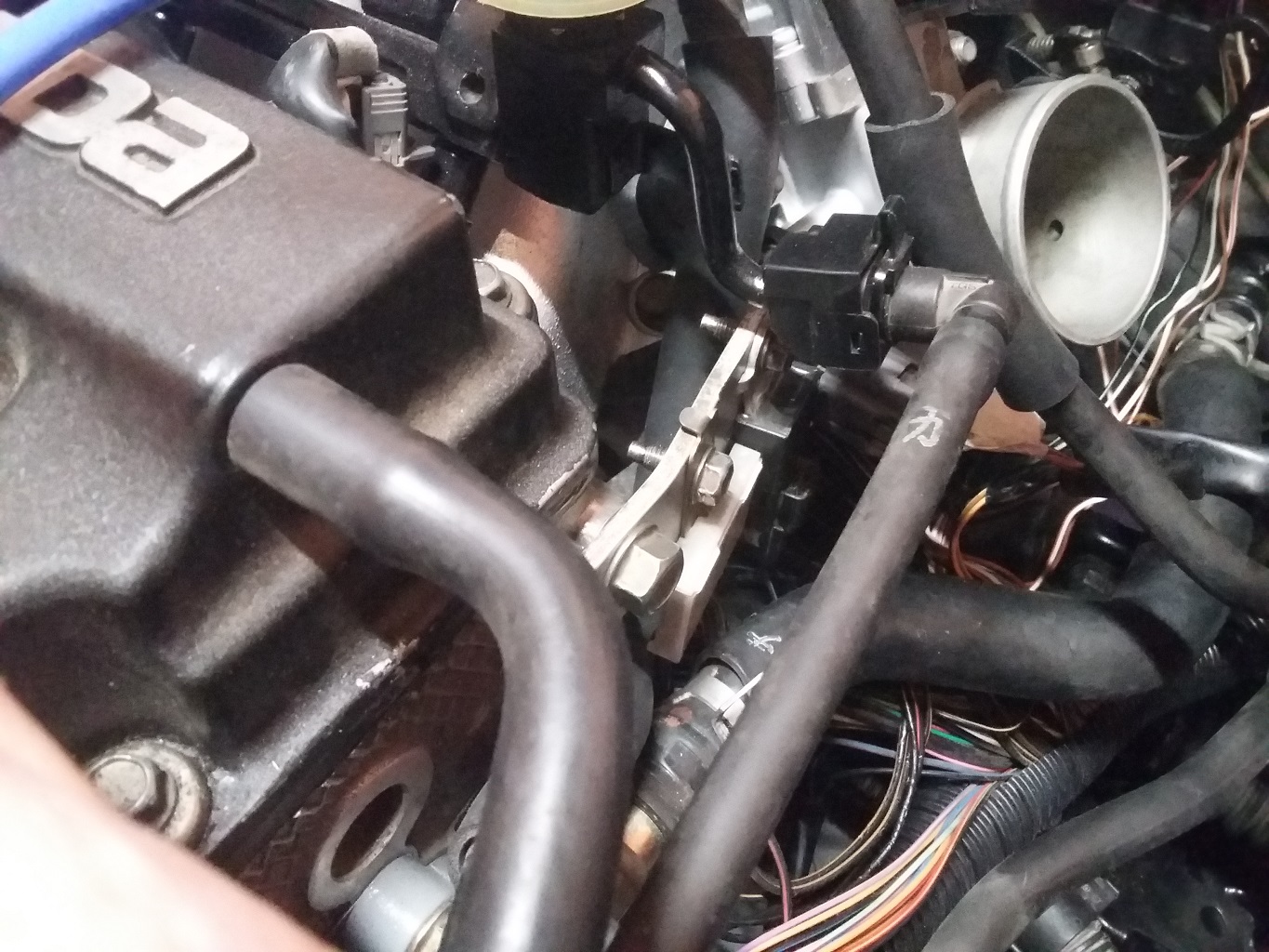 Moved the engine earth block from the front of the engine to the back, heaps tidier without the big steel bracket up front 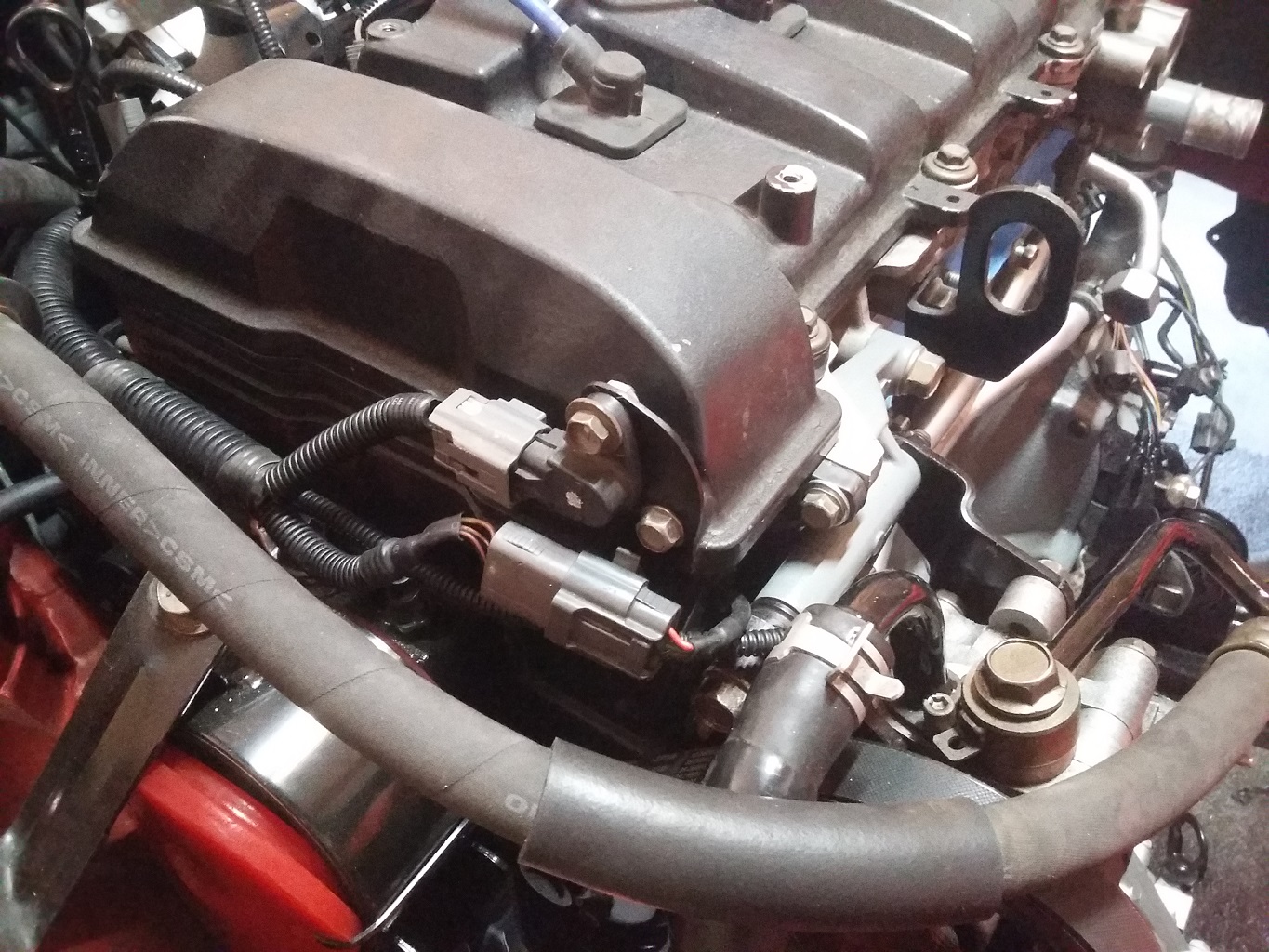 Stole an idea from Jackie Chan's build and made a bracket to lean the cam angle sensor over, added a place for the crank sensor plug as well. Routed the PS and AC/SC wires down and behind the PS pump 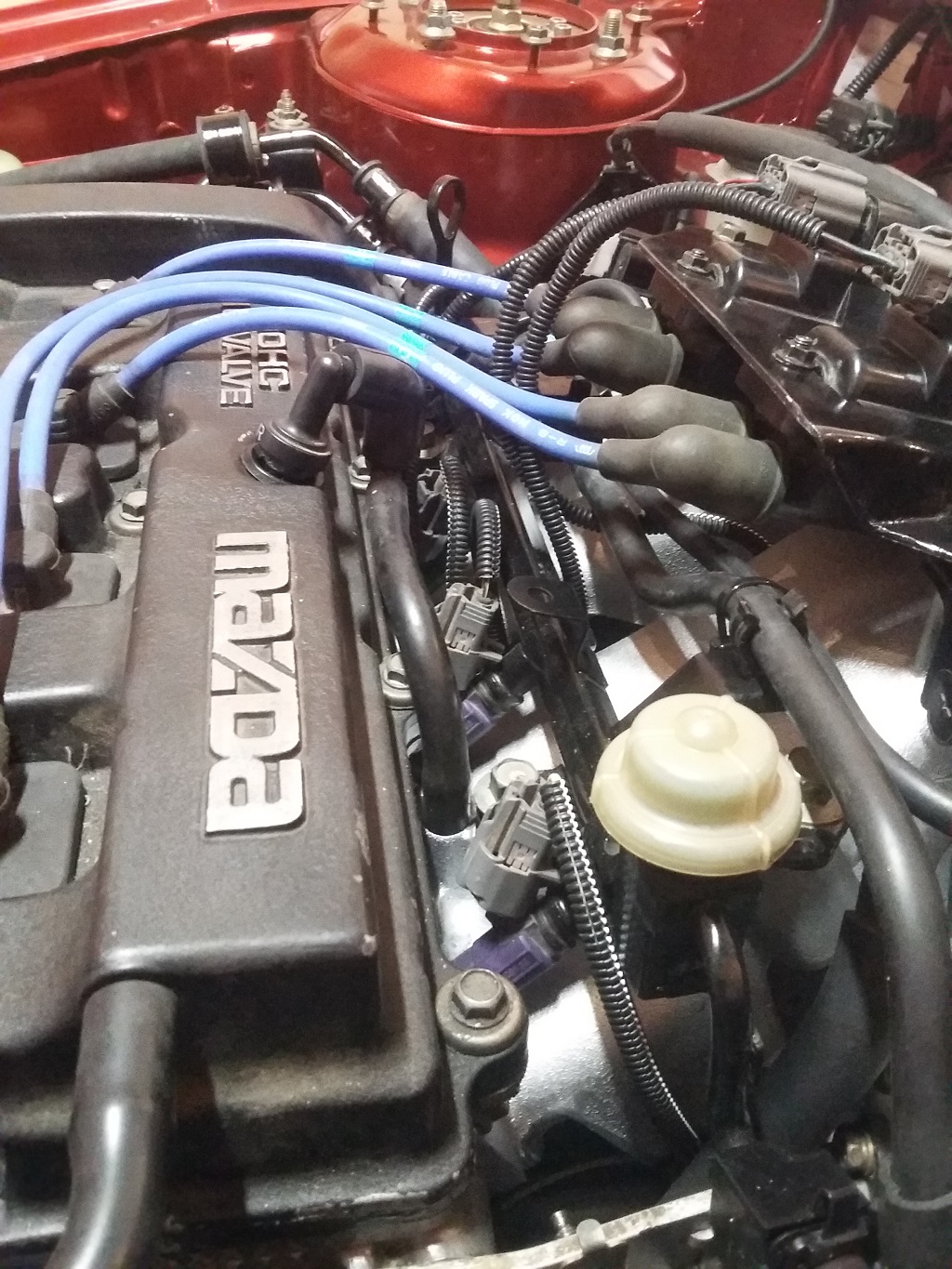 Routed the wiring under the manifold and surprisingly everything fits without lengthening (except the power steering wire that needed an extra 80mm or so). Injector and coil wiring comes up through the window in the intake. Achieved the goal of removing wires from on top of the engine, It's still a little messy but it's a good start. The main idea was to get rid of as many different colours as possible, I really didn't like the bits of wire that were visible everywhere so it's all getting split tube and heatshrink wherever possible

I need to get the new sensor wires in and the battery relocation done before everything gets wrapped up permanantly, then it'll be on to the next part!
L

So this post begins way back in mid febuary when our mate PCB sent me a message with an interesting offer... A sweet pair of GT-Spec strut braces! These are probably the only pair in the country so it was well worth the wait. They need a paint and polish but they are straight and complete. Need to tweak the coil bracket as they are a little too close for comfort but the brace bolted straight in, no adjustment needed! Rear brace in as well, the studs in the BC coilovers are really short, so it means I can't have the seat belt mounts as well as the strut brace...

.... Which is OK because the plan was to rip the rear seats out anyway!

Thanks again to PCB for offering these and sending them all the way over from Canada!

In other news, NZ post has helpfully put my Microsquirt package somewhere really safe and now they can't find it Hopefully it turns up soon as it's a major piece of the puzzle
P

While we're waiting for parts, its a good time to knock off some small jobs while there's time. Bonus long weekend means a whole extra day to work on the car!

First up is a small improvement, bonnet struts! Here's all the things required One strut will actually hold the bonnet up on it's own, but two struts is much sturdier and symmetrical!. I made the alloy top brackets with a little bit of adjustment for fine tuning, Countersunk bolts because the originals were getting in the way of the strut when the bonnet was lowered At the bottom I used a factory hole on one side and mirrored it to the other. The bracket is a big penny washer and some offcuts from work, nice and cheap! Still need to tidy up some welds and throw some paint on it all, but another little job ticked off the list!

Moderator
Looks very nice. I've always wanted a set for my hood. Does it open the hood as high as it does normally? I feel like I've seen kits in the past where the hood is slightly lower. I feel me being a creature of habit would end up pranking my head on the hood very often.
L

It's slightly lower than stock, I'm going to whack my head a few times!

Were you able to fix the stripped subframe? I think I have the same issue. I have to do some work on the transmission and front sway bar but I’m putting it off haha. Did the helicoil fix work?
L

NemosMP5 said:
Were you able to fix the stripped subframe? I think I have the same issue. I have to do some work on the transmission and front sway bar but I’m putting it off haha. Did the helicoil fix work?
Click to expand...

Yep, the helicoil worked a treat! The bolts aren't torqued too tight so there's no risk of breaking the coil once it's in place. It'd be near impossible to do with the subframe on the car though as access is super tight, right up against the firewall and chassis rails!
L

After a long week at work I had a deep need to do something actually useful and to make a bracket. The coil packs need moving so they don't hit the shiny new strut brace or the intake manifold so they seemed like a good candidate for some Friday night bracket action. Being a tight-arse I wanted to only use stuff from the scrap bucket, here's what I had to work with: After a bit of swearing, some measuring and a good bit of thinking, this is what I ended up with: Compared to the previous bracket, the coil packs sit on their sides and are much lower profile. The old bracket is alloy and the new one is steel but there's hardly any weight difference between them Aaaaand here it is installed on the motor, much nicer! At the other end of the car the boot and rear seats are out in prep for the battery relocation. Sound deadening is coming out too. It was surprisingly easy to lift with a scraper and mallet! about 2 hours to get the three areas that are exposed back to metal.

I've got 5M of #0 AWG cable to run forwards, which is probably overkill but the last thing I want is for the car to catch fire because the wiring was under speced. The battery itself will sit on the drivers side, which is kind of annoying for weight distribution, but it's about the only place it'll fit without blocking the spare wheel. I really don't want to run a completely stripped interior as it simply doesn't look great, so the plan at the moment is to modify the side plastics to remove the seat holes and have a flat floor all the way through to the front of the rear seat base. Not entirely sure how it'll work just yet!

Lastly, this little bunch of goodies finally turned up: This thing is tiny! should be pretty easy to make a bracket for it somewhere under the dash. The challenge is going to be the wiring and setup. It's a little scary but slow and steady will win this race.

Next on the to-do list is to get the battery all wired up and run to the engine, get the new sensors in and grab some gauges so I can wrap the wiring loom in one go. There's a catch can and boost distribution block on the way so they'll go in soon too. The finish line is getting closer!
P

LankyKiwi said:
... Being a tight-arse I wanted to only use stuff from the scrap bucket, here's what I had to work with:
View attachment 225342
Click to expand...

If it were me, I'd be making a bracket out of beer cans, coat hangers, and duct tape. Lol
L

If it were me, I'd be making a bracket out of beer cans, coat hangers, and duct tape. Lol
Click to expand...

Nothing wrong with a bit of duct tape and beer can action! There's been some amazing things built out of those materials.

I'm lucky that I've got the space and some of the tools to do it, plus my day job is all about making brackets and figuring out how things go together.
D

still going with the rally-inspired idea?

The coil mount on the intake(revised edition) is very nice. I like that a lot. and good on you for relocating the mounting area for the hood dampers- the regular fender location causes issue most of the time.
L

Hood dampeners still need a little refinement as they're still a bit too tall. There isn't as much room under the bonnet as expected! The guard mounts looked possible but not as easy to mount for the struts I had.

The rally theme has died down a little bit, it's not going to be a full on competition car or anything like that, just a super fun back-road go kart. I'll probably add a few aesthetic nods to group A / group N rally cars and maybe throw it at some tarmac hillclimbs once it's done.

In progress news the rest of the sound deadening is out, bar the front footwells. Filled up an entire 20L bucket with about 6kg of deadening! The new battery cables will make that weight back up!

The front footwells are being left as they're big, flat panels where the sound deadening actually does a huge job. All other areas have ribs and creases and didn't really sound different with or without the deadening, but as soon as I chipped off one corner up the front it turned in to an empty steel drum! The difference in sound was amazing, and the car would be deafening without it (It'll be loud enough as it is lol)

This weekends plan is to mount the battery and run the cables, should be fun!

@LankyKiwi, I made my own hood dampener brackets, and used the 'bonnet struts' (that's downunder speech) from a car you maybe familiar with in NZ. The mighty AU Falcon!