Issues I didn't expect from the new 2019 Mazda3

hoodlum said:
It is also mentioned in the Mazda UK press release.

Thanks. I am not sure what Mazda is thinking. Two-cylinders at 2 RPM will produce how much HP? 30? I know Mazda is getting punished in Europe because of fuel issues, but this seems like a bad way to address it.

So when you test-drove the car you didn't notice any of this?
T

Lundmand said:
Two weeks ago I took delivery of my new 2019 top-of-the-line Mazda 3 Cosmo 2.0 manual (EU model). There are SO MANY good things to say about this car. BUT!

Mazda - I really hope you're reading this:

- Left side mirror tends to vibrate during highway driving.
- Cylinder deactivation is often noticed as a slight "notch" in the engine power (deceleration). During periods when cylinder deactivation occurs repeatedly, this "notch" becomes annoying.
- If driving less than 60 mph on 2 cylinders (in cylinder deactivation mode), noticeable vibrations penetrate the cabin. If you have ever driven a car with a 2 cylinder engine before, you know exactly what I'm talking about. Vibrations disappear when all cylinders are activated.
- The Lane Keep Assist system cannot center the car between road markings at more than 35 mph. The current Mazda 6 and CX-5 can do this, despite having an older system.
- HOLD function turns off every time the engine is turned off.
- Cruise control and acceleration are too aggressive and cannot be adjusted.
- The parking sensor is activated prematurely during heavy traffic and cannot be temporarily deactivated. If you turn it off you have to remember to turn it on again.
- The fuel consumption unit cannot be changed. But the unit for tire pressure can.
- The animation of the car's wheels while driving in the "Energy flow monitoring" menu fails (the rims flutter - it almost resembles an epileptic seizure).

Besides these 9 points, the car is FANTASTIC! I describe it to many that it's like driving Mercedes-Benz. As an engineer and programmer, I estimate that 6 out of 9 of these points can be corrected fairly easily by updating the car's software. I really hope this will happen soon.
Click to expand...

I have a Mercedes so I'll chime in on a few things.

Left mirror- that can be fixed

LKAS - it's very dependent on the road marking and how the markings bend. A software update could make it better too.

Hold function works like it does on my Mercedes. It wont hold when you shut the engine off.

Cruise control is aggressive in all cars I've owned. German, Japanese and FCA

Parking sensor works the same on a Mercedes
C

Honda's VCM have had issues for years and would never touch one again. My driver mirror on my cx9 vibrates as well.
E

All of them have cylindar deactivation. I have the sport lux and haven't noticed any of the issues you list. I am though going to take a drive and have a look at the engery flow animation, i've had it on before but not really taken too much notice.

I do sometimes get the word BRAKE flashing up on the hud when a car in on the other side of the road...

My main annoyance at the moment is that every bloody fuse appears to be constant, there not switched fuses... I can't understand for the life of me why things such as the central console dial needs a 12v feed ... when the car is turned off! And its the same with power sockets, and windows etc.

" HOLD function turns off every time the engine is turned off."

This is a feature on a several of the mazdas, you have to turn it on every ride. Mainly because holding the car on a foot brake is not the correct way to drive so shouldn't be encouraged. I wouldn't be surprised though if this can't be over riden via a secret menu option.
Last edited: Jun 16, 2019

cawcx9 said:
Honda's VCM have had issues for years and would never touch one again. My driver mirror on my cx9 vibrates as well.
Click to expand...

Looking this morning at the energy flow animation. It's not a bug, its just cheaply made animation probably to save on processing power. Why animate a complete wheel rotation when you can just cycle between static images. It's not as if you are sat staring at it your entire journey.
Last edited: Jun 21, 2019
L

I have added another complaint. This time a very physical one: Badly shaped sheet metal on drivers door. By the way, all of the above have now been logged by Mazda Europe. 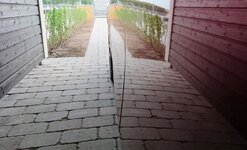 Hello, other European Mazda3 here and the same feeling (issue?) when the cylinder deactivation kicks in and kicks out. Sometimes it is smooth and unnoticed, other times, if you are paying attention you will feel it.

Yes we have 2.0L engines with this feature but I was expecting it was unnoticed at all times. It turns out that when you are smoothly cruising and you lift the gas pedal a bit, a small bump happens.

I was curious if it could be some issue with mine or if this is even an issue because it is barely noticed but yes it happens. Would be nice if there was some option to disable the feature.
Is there a way to join you in your report to Mazda? Any contact I can use?

Regarding the vibrations while on 2 cylinders it is just a matter of pressing the gas pedal a bit and force to go 4 cylinder. I don't see a problem in it. You can't complain also if your car vibrate because you are in a high gear (ex. 5th) riding in low speeds (ex. 30km/h). It will vibrate for sure.
L

The issue wth CD occurs most noticeably at 60-70 km/h on small constant inclines. The engine works hard at 1500 rpm, resulting in harsh vibrations. Yes, pressing the gas will deactivate CD for a moment, but return immediately when speed is constant.

I have reported all of the above to Mazda Denmark. If more owners report the same issues, they will forward it to Mazda Europe. If then enough EU customers object, Mazda Japan will be notified...

Mostly I am annoid that most of these issues are software based, and could be solved relatively easily. And also, that Mazda has moved "premium" and should be have as such.
M

I've reported to dealership in Portugal but no importance was given. I bet it will never reach Mazda Portugal and even better Mazda Europe unless other owners complain about the same.
L

Example of how long Mazda can take to recognize and address a serious issue:

Hello. Have a new Mazda 3 Astina 2019 here in Australia. That is top of range with 2.5 ltr engine. I too have logged with Mazda dealer and will take further if I have to issues with cylinder deactivation. At 100 kph it is fine and unnoticeable and there seems to be a fuel saving but it anywhere between say 70 kph and up to about 95 kph when it kicks in it can feel like im driving a truck. You can feel vibration through the floor. It certainly isnt a smooth ride and takes away what should be a pleasant driving experience as most of the other things are pretty good. I had a 2014 Mazda 6 GT model and I loved that car, the 3 not so sure about as yet. Fix the CD and I might like it more. Waiting to hear back from Mazda but get the feeling that this is going to be a world wide issue that they will need to find a fix for. Happy for them just to get rid of it altogether or just make it 95 kph or above. If I get no joy from dealer then will take it up with head office out this way who aren't far from me. I'll take the CEO for a drive perhaps.
2

The cylinder deactivation is also annoying me. Programming is too aggressive and opts for 2-cylinder mode as often as possible. Transition isn't the smoothest and the vibrations are annoying.

I do get very good fuel economy on average. If the annoyance doesn't get worse, I can live with it. I just hope its reliable and durable.
L

I've brought these Issues to Mazda Denmark and been at the dealer/workshop to try to fix them. Only thing that have been fixed so far, is the rattling noise from the dash. Most other issues are being investigated (apparently...). Most recent bug is a wrongly calculated average fuel consumption. By documenting all trips, I noticed, that after about 2000 km on the trip, overall fuel consumption (not last trip consumption) started climbing. I went from average 5.7 l/100km, to 9.0 l/100km over an additional distance of about 1400 km. All trips driven in that interim were less than 6.0 l/100km. Obviously a software glitch (how could they get that wrong!?).

My dealer says they are waiting for Mazda Denmark to find out if the CD can be permanently switched off.

Still pissed about the unresponsive rain sensor also. Not nearly sensitive enough, even on the highest level.

I'll keep posting updates, if I get any.
Please log in or register to reply here.

A
Mazda3 2.5T Quick questions about the new Mazda3 Turbo