How To: Make an AUX input for FREE

so I have 05 Mazda 6 but my cd changer will not load any CDs, with some CDs stuck in too. when i switch it to Cd it says no Disk. is this method going to work for me or any ideas.
Thanks
P


FrankCarrillo said:
OK, after some searching in the thread, I found a number of potential solutions which involve my soldering wires to the PCB board and playing a "silent CD" (Posted by Dragan and buba). Not sure I can follow those instructions completely - see my reference to my soldering skills...

Has anyone figured out an alternate solution? Really frustrating that Mazda did not make the radio a little more flexible in being able to add a simple AUX input.
Click to expand...

Do you think this will work with my CD changer saying "do disk" with cds stuck inside it?
Any ideas would be much appreciated
M

Thanks to the OP and all who have contributed. I've used this info today to convert my 2004 non-Bose Mazda 6 touring to have an aux input using buba's blank CD method with Dragan's trick of soldering direct to the PCB. Reminder - do not try to short pin 13 on the back of the radio on a pre-2006 car! I'll add some pics and notes from what I learned, in case it helps anyone:

First pics of the stereo opened up 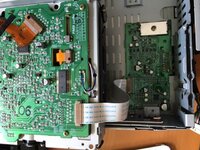 Lower PCB board (under the CD player) 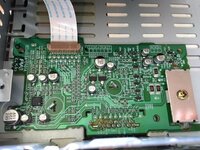 Upper cd board (attached to underside of CD player) 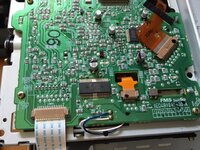 Upper board after wires soldered: 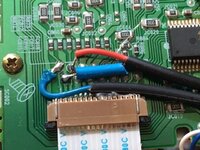 Pinout is the same as the (labelled) connector on the lower board. The ribbon cable is direct pin to pin after all. So from left on the top row you have audio right, audio left. On the bottom row the LHS pin is audio ground. Do use hot glue to anchor the cables before you solder them!

- First, the tip to refit the gear knob is a good one, it does save scratching your trim
- Second, the cup holders on the 2004 car don't have the plastic tabs referred to in the OP, you simply grab the whole unit including fascia and pull it up hard. Then squeeze the two tabs which lock it to the next panel (gearshift fascia) and release them
- it feels so wrong to start pulling your car apart but I suffered no snapped clips or damaged plastics. Trust the instructions and use a bit of grunt
- when removing the centre trim you need to unplug at the rear of the radio and the side of the radio, but the lower connectors can stay attached. You can unscrew and remove the radio without taking them apart.
- taking the top off the radio doesn't require removal of any screws, just prize it off with a flat blade screwdriver
- a magnetised small crosspoint Philips screwdriver will be very handy for removing the CD player, as the two screws at the front are buried deep
- remember to thread the audio cable / cables thru holes in the case BEFORE you hot glue and solder them
- I soldered to the top board (the one which is attached to underside of the CD player) and found this much easier than the lower board, as it's more accessible. Even though the lower board is the one which is labelled, the connections do of course make it through that ribbon cable in a straight line, so you can see easily enough where they appear on the top board.
- use hot glue to hold the cable close to the solder connections, and more to anchor the cable as it leaves the PCB. Use a cable tie to strain relieve the cables as they pass through the radio case. You don't want to be taking the radio apart and resoldering because someone dropped their phone and gave the audio cable a tug.

I think that's it. It was a lot easier than I expected. Only hard parts were getting started on taking out the cup holders, and persuading my old windows laptop to burn a blank audio cd!
O

I've recently bought myself a Mazda 6 estate 2003...it's a runner for work but it's still in a very tidy condition and at a steal for 600 with 12 months MOT and no advisories, drives sweet as a nut...very happy indeed.

I'd like to thank the guys here for discussing this mod as it's helped big time, i'm all about the comforts and having the aux jack in my car is one thing I have to have...

What brings me here is after installing this mod, this was done by soldering the headphone cable or in my case a 3.5mm jack to 3.5mm jack with one end cut off to the CD PCB inside the stereo. I've done that with the cable then coming out of the top center pocket (where the satnav would be if I had one) but also I've added another cigarette lighter socket which if tee'd of the original cigarette light and hid that behind the dash/radio with the USB charging cable also coming through the same hole in the center pocket, this then means I have a permanent phone/tablet charger without bottlenecking the 12v socket and no messy wires. I've done the thing with the hinge (YouTube - Galaxy Tab im Mazda 6 (sorry for advertising another website) for those who haven't seen this) with my Samsung Tab 3 and works/fit's/looks great, except one thing...I get a hum/frequency noise that get more high pitched with the engines revs but this only happens when it's charging if I disconnect the USB then it's goes away. I'm assuming this is some kind of ground issue...

Before I take my dash apart again to take a look which will probably be at weekend, I was wondering if anyone might have any idea's or even better a guarantee for the fix, again thanks this thread alone has been big help.
N

wannabe said:
what part doesn't work? no audio? or no AUX/Media button?
Click to expand...

Hello, need help for the same problem. I tried all combinations but no solution. I got Mazda 6 2002 and need help how to turn on AUX/Media button to show on display.
Please log in or register to reply here.