So after searching for a how-to on removing the bumper for a P5 and not finding any with pictures so I thought I'd make one for everyone out there.

Start by removing the Grill. There are two screws in the outer corners. (you don't need to remove the grill to remove the bumper, it just helped me get a good spot to grab at the bumper to remove it.)

There are also 2 pop clips on either side of the hood release lever that need to be removed. Use your flat screwdriver to pop the "head" out and then pull the whole clip out.

Pull the Grill up and away from you. Be mindful of the large post that is circled in the picture so that you don't break it.

Don't be afraid to pull rather hard, it will come out and then look like this.

Next go to your wheel wells and remove the 6 plastic pop clips that holds the plastic splash gaurds in place (3 each side). It helps to turn the wheels for more room. Use a flat blade to get behind the center part and pop the center ups. Then grabe them with a pliers and pull them the rest of the way out. These have a philips style head on them but they are not screws, just pull them you won't break anything.

Now remove the 6 screws on the bottom of the splash gaurds (3 each side) that point towards the ground. This is where a shorty philips help so you don't have to jack the car up. If they are rusted a socket wrench will give you better grip on them.

Then remove the 4 10mm bolts that holds the plastic peice thats under the car. I don't know what it's called but it lets me know if I'm too close to a curb pulling forward. The bolts also have a philips head to them so you could use your screwdriver as well. (this also doesn't need to be removed but with it out of the way it was easyier to see the two bolts behind that)

Remove the 2 12mm bolts there about 2 feet apart from each other a little farther back from the plastic peice you just removed.

This is the hardest part. Go back to the wheel wells and pull the black pastic back. There are 2 screws in there that hold the bumper on. The first is right near the edge and easy to see and get to. Remove this bolt.

The other bolt is at about the same level as the head light and the head is pointing down towards the ground. A flash light may help to locate this bolt. Use a long Philips to remove this bolt. The picture is looking up at the bolt from the ground with the plastic pulled out of the way.

Now all bolts and screws holding the bumper on should be removed. Grab the bumber in the center and carefully pull the bumper up and away from the car. There are two tabs under the corner of the headlights that the bumper is sitting on. (I had no problem with them so I took no pictures of them). Don't fully remove the bumper just pull it away a bit to get to the fog light connector on the passenger side. Undo this connection.

The bumper is now free and can be lifted the rest of the way off the car.

There you go! Your bumper is now off so you can do what ever you need to with it off. A bit of disclaimer.. I'm not a professional mechanic or anything so do this at your own risk. My car is 2003 Protege5 5spd, yours might be different. Please be safe when working on your car and it's not my fault if you follow these instructions and mess something up or get hurt. Where saftey glass when under the car a bunch of stuff could fall into you face from the splash gaurds.

It also helps to have a small bowl to put all the bolts and screws in once you take them off. I have a stack of disposable glade ware that I use with lids incase I need to come back to a project later.

Hope this helps someone out there who's looking to take the bumper off. Thanks for looking! (wiggle)
Last edited: Aug 24, 2010
J

Great How to.Im sure there is alot of ppl that will be needing this.
F

(yippy)(2thumbs)
Awesome! I love how to's.
Especially one's with pictures!

Thanks & this should definately be moved to the "How To" section!
T

Awesome howto, the service manual's diagrams are a bit lacking.

*CheeseHelmet beat me to the punch, so I apologize for the redundant info

Good job with the write-up. I've removed my bumper three times in the last week. Wish this was available when I did it the first time. The pictures help a good amount.

Not trying to threadjack, but merely offering up some pointers that helped me:

I didn't remove the grill or the plastic piece under the car - to me it didn't seem necessary when I was messing with my headlights. I also used a small ratchet to get both screws on the inside of the bumpers - 4 total. I found that to be easier than a stubby screwdriver.

The brackets that are on the headlights where the two holes of the bumper sit on may be tricky for some folks. In another How-To, the OP broke the little tabs since he just yanked the bumper off. You have to lift up and then pull towards the front of the car. Here's the page from the Service Manual on taking off the front bumper. Maybe it can be an aid to your How-To: 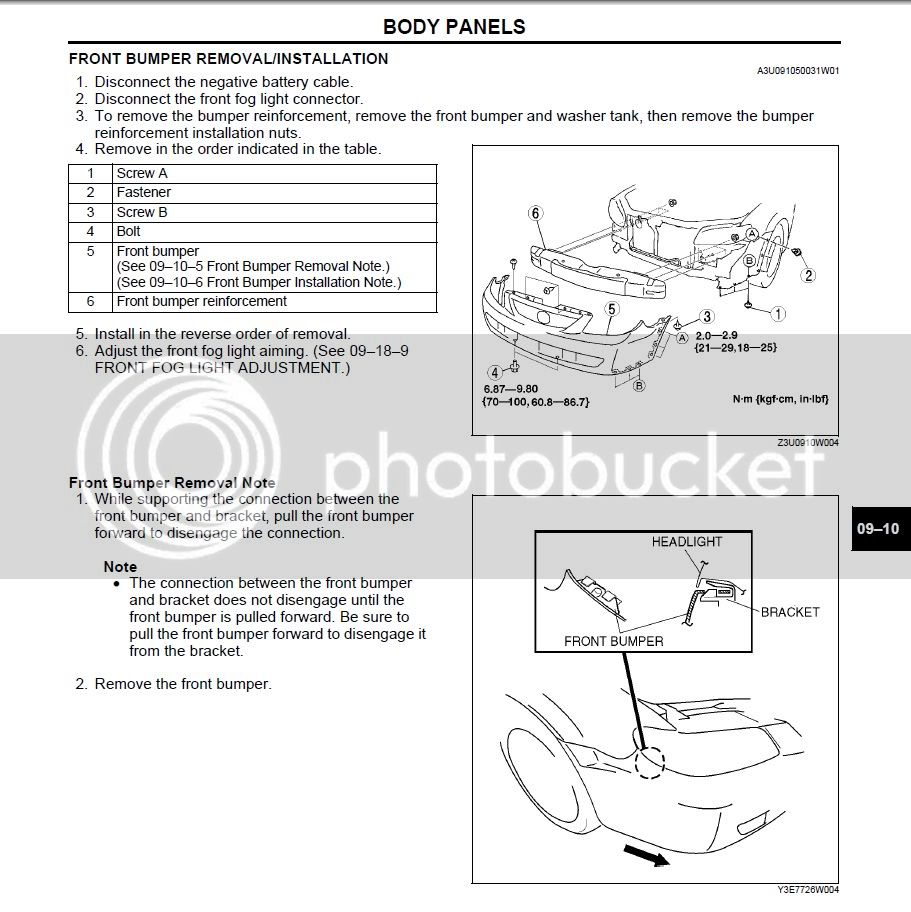 Thanks for the addition of the pics for the clips. Either mine were broken or I just did it right the first time cuz I picked up and out and it came right off. Also you can turn those clips all you want in the fender well but they are not actually threaded the lines make complete circles or rings around the shaft they don't twist at all so if you were able to get them out by twisting you were lucky.
H

Moved to How To section.
S

HKPRO5 said:
Moved to How To section.
Click to expand...

Thanks for the heads up... Its been added as

almost identical to taking off the mz3 bumper
A

Excellent write up.. i hope you don't mind, but I used this as a reference for my DIt but gave u credit

Great write up! i am about to rip this bumper off in about 20m lol. well whats left of it lol
D

I can't watch the pictures but your post si going to help me so much to remove my bumper!
U

what about the rear bumper??
i want to repaint it but not sure how to remove it
N

Thank you very much, I think I can do that. lol


UncleShrek said:
what about the rear bumper??
i want to repaint it but not sure how to remove it
Click to expand...

Yeah a how-to rear bumper removal would be nice.
X

Are the pictures still available? Not coming across for me...
G

I know this is resurrecting an old thread but I need to keep track of it and also have a question. I recently got a 2003 p5 and it has been damaged in that the bumper is pushed back about 1/2-3/4 inch and hangs down a little. The bumper itself doesn't have any dents or even scratches but I need to fix the fit, I ordered a new upper and lower grill as they are both cosmetically or mechanically damaged but I'd like to get it all done at once -

so my question is - will I be able to adjust or straighten this or will I need a new bumper reinforcement most likely? I see that the cover is quick to remove and that the sag plates are available but would really just like to get everything squared up.

Thanks
You must log in or register to reply here.