Have you DIY'd your front sway bar bushings??

Awesome with the pics thanks! I'm hoping you were able to get enough torque on those bolts using a 1/4" ratchet...
F

I've replaced the bushing 3 times now, and even with a long-handled 3/8" ratchet and anti-seize, they require a decent amount of force to break/loosen. I couldn't imagine how long it would take to do this from the wheel well as vesko_m either. Do it when you change the oil and have the front end up on ramps.
S

Replaced the fronts with OEM bushing. Removed end link since I was working on the shock anyway. Disconnecting the FSB helped only a little bc it can only rotate up, which doesn't seem to create a whole lot of space. I'm sure it helped some but it is not as impactful as I hoped. It was still a painfully slow quarter turn using 3/8 ratchet with a long socket for the rear bold and a stranded socket with a short extension for the front. Not hard, just tedious.
H

I may end up doing this because something is sounding pretty funky under there. The noise seems to come from underneath right under the firewall and goes across the width of the car. So I'm checking those bushings.
K

Thanks for the pictures. I think it will a bit different for everyone - depends on the size of each person's sockets, rackets, arms, etc. I was able to remove the bolts without dropping the subframe. One thing that I didn't know (it's obvious once you think about it) - you need to jack both sides of car at the same time so that the sway bar doesn't have torsion on it, otherwise it is hard to remove the bushings. I think there are 3 types of oem bushings, the first ones are smooth, the 2nd set have a textured tape on the inside of the bushing, the last type have cross-hatching on the inside of the bushing. Once I broke the bolts loose, I was able to use a small 1/4" drive racket to quickly remove the bolts & tighten them down again (since I have a small arm and able to get my whole hand over the bushings). If I have to do it again, it will be much faster the 2nd time . I have 93k miles on our car - so they lasted quite a long time, it was only starting make a little creaking noise going over bumps, but this is in southern CA.
R

I did this on my 2k focus. But I just can't on this car, don't have the time, plus I got struts and shocks that also needs to be done. I've knocking from the bushings, shocks that creek & tires that are noisy, it's driving me insane!
H

Did this on my 5 not too long ago. Pain in the butt, though not very difficult. Don't be afraid, you'll appreciate the quiet
G

Don't want to beat a dead horse here, but you can do it without lowering the front subframe. The clunk we were hearing constantly started driving me crazy. I was hoping that after I removed and re-torqued the bolts under the cowl and had replaced the front struts, that the noise would go away, but it stayed the same throughout. (The struts did improve the ride quite a bit because one side was leaking badly.)

Anyway, if you are patient and just a little flexible, you can get in there and do it with the wheels off pretty easily. I ordered some energy suspension polyurethane sway bar bushings that were greaseable and about 5mm wider than the stock units. I used a rotary file to 'slot' the bolt holes in the mounts so it fit just right. It made an incredible difference in the rattle issue we had in the front end. I grease them now once every 6 months and they have been quiet as can be on our 2007.
K

Some advice that may help those attempting to replace the front sway bar bushings.

For me, the hardest bolts to remove without dropping the subframe were the rear bolts on the front bracket. I wasn't easily able to get a socket on them with enough room to get the racket to engage. I found out I could get a box end wrench that would reach slightly beyond the rear of the subframe to easily loosen and tighten the rear bolt. A ratcheting closed end wrench would probably work even better, but I didn't have one at that time.
J

So we are running a 2008 Mazda5 2.0 Diesel Sport Nav which has sounded comprehensively broken for the last 6 months, i have kept putting this job off.

For the benefit of countries that dont have the 2.0 diesel....its a lovely motor (with it's own problems, yes..looking at you DPF) but the DPF really intrudes in access from the under side of the car....i.e....NOPE.

Anyway....right hand drive so bear that in mind.

Driver side -
front bolt was accessed through the wheel well and was probably the easiest of the lot for some reason, even with the PAS
rear bolt was accessed from under the car where the DPF pipes etc aren't in the way 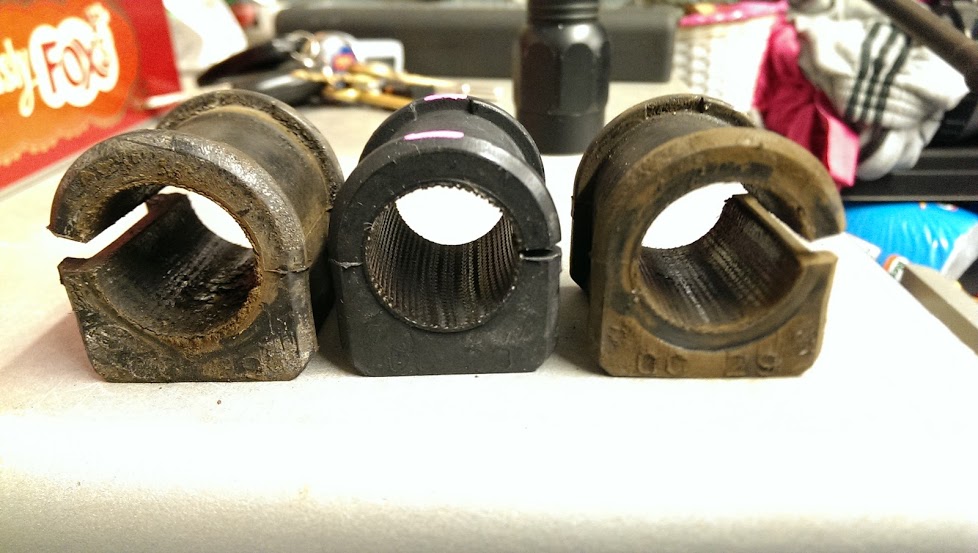 Also note, these are the revised bushes so there is obviously a relatively short lifespan on these

Great write up guys. Thanks!

Keep in mind. Passenger side for jinjur is drive side in America.
A

Glad I found this thread because even the back bushings bolts were terrible to remove and there was plenty of access. The front bushings seemed impossible when I was under the Mazda 5. Will give accessing from the wheel well a try. Kudos to the original poster.
A

Two sway bar bushing bracket bolts snapped when I tried to replace the bushings. The locations are rear driver side and front passenger holes. Accessing the bolts from the wheel wells was a struggle. Had to extend 1/2 inch socket with a pipe and unscrew one ratchet click at a time. They snapped when the entire exposed rusted portion contacted all the hole threads. I guess friction was too great.

Now there is a bigger problem of removing the Gr 8 bolts stuck in the subframe. Tried to drill a hole in the subframe directly below the bolt to reach it but the small 1/16 drill bit didn't make a dent. Any suggestions. 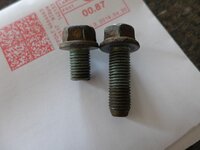 I just did this job when I redid the front struts on a 2010 Mazda 5. That front driver's side bolt is definitely a PITA to get to. From the driver's side wheel well, I used a box end wrench over it with a 12" cheater pipe and got her free. Also from the wheel well, I used a few extensions with 2 swivels on a ratchet to work her out. Thank god for NC cars and no rust.

If I was to do it again...I WOULD REMOVE THE BATTERY AND BATTERY BOX.

I had to remove the box because I dropped a strut bolt behind it. Looking down in the engine bay...It looked like I should be able to get at it easily from the top.

I also removed that skinny skid plate that crosses the exhaust tunnel...this give you more room for your arm working underneath.

Everything else, I worked blindly but it's pretty straight forward.

After the struts (KYB) were swapped in and the sway bar bushings replaced...ZERO clunking up front.

Thanks for all the tips guys.

To finish the story, I drilled a 1.5" hole with a Lenox holesaw in the subframe below the broken bolts. Next I drilled out the bolts with some cobalt drill bits. Then switched to a 1/2" bolt and nut after the bushing change. No more annoying clunk.
Please log in or register to reply here.