So I got a cracked windshield and I'm looking into SCCA RallyCross. They state I need a windshield that's crack free, now I'm also on a heavy budget and don't wanna pay 300 for a windshield. Has anyone pulled and installed one themselves?
P

I got a used windshield from a wrecker for $75 and gave a guy at a windshield repair place $20 for a tube of his urethae windshield glue.

The used windshield was removed from the donor car already but I had to remove my old one. I used a box cutter knife and made all kinds of passes over the same area to cut through it. It's too hard to make one deep cut.

As it starts to cut through the windshield starts to move and you can see where you need to cut more. I left a lot of the old glue in the opening so I wouldn't run out of new glue and it helps to center the replacement windshield.

They also have a piano wire type windshield remover where you make a hole through the old glue, feed the wire though from the outside to the inside then saw back and forth to cut the windshield out. (I didn't try that method)

The biggest problem I had was that I used a cheap ass $2 dispenser gun and the urethane was as thick as tar.
My gun handle was bending and I had to try to pump the handle with the help of pliers.
I was squeazing so hard my knuckles were turning white and the nozzle was bouncing around putting urethane every where.

Once you open the tube, you've only got about 15 minutes before the urethane starts to harden and it will harden up right in your dispenser if you wait too long.

Get yourself a professional quality dispenser gun like the red one in the picture. Its got long solid handles for more torque and it won't bend or break.

So you just cut it out, line the seam with the glue and then just center the windshield and press it on? Do i have to hold it in place or keep pressure down while the glue is setting? Do you know if the sedan windshields match the wagons? There's no p5s near me but there's a couple sedans in the junkers.
P

Yea, if you cut out your old windshield right at the edge of the glass, the replacement will fit right in and be lined up proper.

You don't need to hold it but there are plastic supports on the bottom of the windshield that will keep it lined up.

I put the bottom of the glass on the spacers then rolled in the top.

It's important to have a complete seal or you will have a leak.

You can cut a notch (or "V") in the nozzle of the tube to make a wedge of tapered glue so there is complete contact with the windshield.

I'm about 90% sure the sedan windshield is the same but not positive.

Having someone help you is pretty much necessary.

Sweet thanks for the help man, might see this in my thread in a month or so........or a year haha
P

Like this.
(I had a hard time finding a picture.)

The hardest part is knowing you've only got 20 minutes or less to apply the glue and get the windshield set in.
P

Oh..
And try not to cut into the spacers at the bottom of the windshield. (you kinda know where they are)

You need them to set your replacement glass on.
P

Worste case scenario is that you end up in Emerg. with a winshield glued to your hands,.. but that rarely happens. lol
P

I missed a couple of spots with the glue when I did mine.

This spot rusted through a couple of years ago so I sealed it with silicone.

It's been working fine.
I had water running into the cab but I sealed the leak. 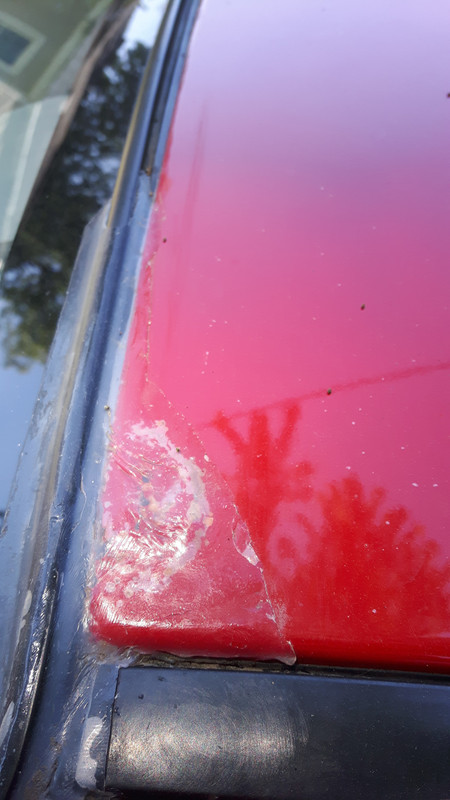 This one is new and I intend to clean it up and silicone it too... In a month or year or so. lol 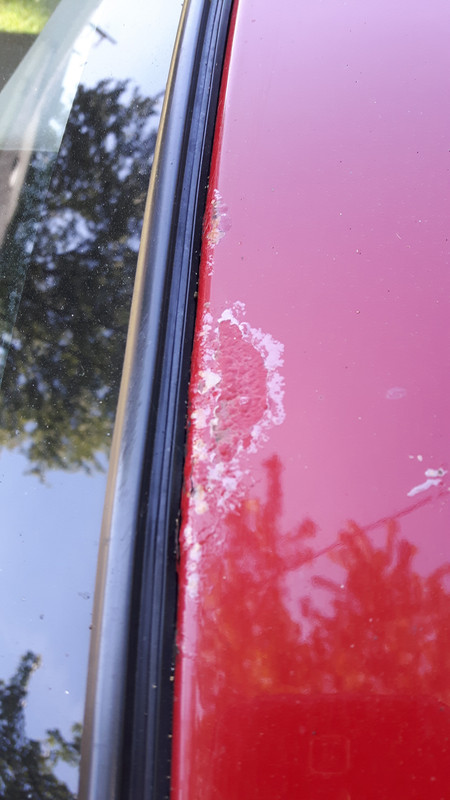 That would be one hell of a hospital trip, I rarely wear gloves when I need to and always realize once the 'oh shit this won't come off' panic sets in haha.

And man the rust up there is crazy, I've got 2 small spots where yeller got hit with a BB gun but they havnt really spread that much. 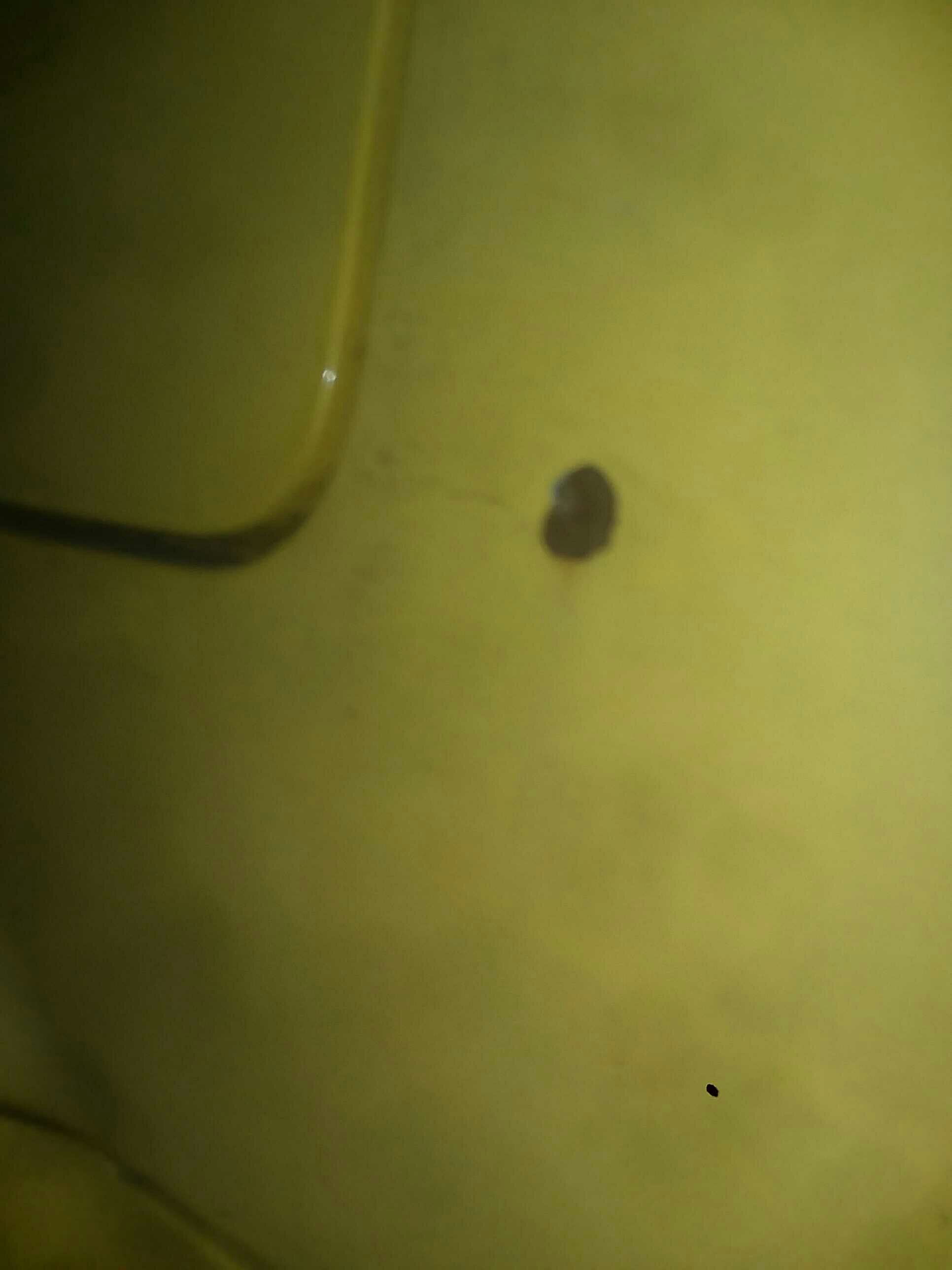 Yea,.. I've got a few spots of rust here and there too. lol 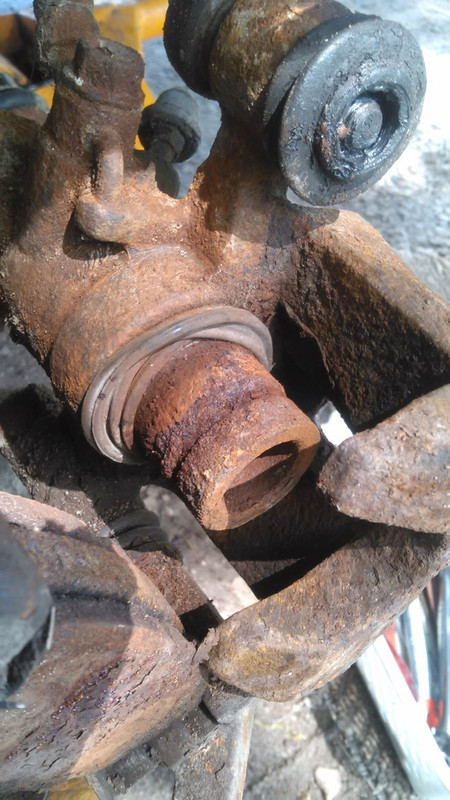 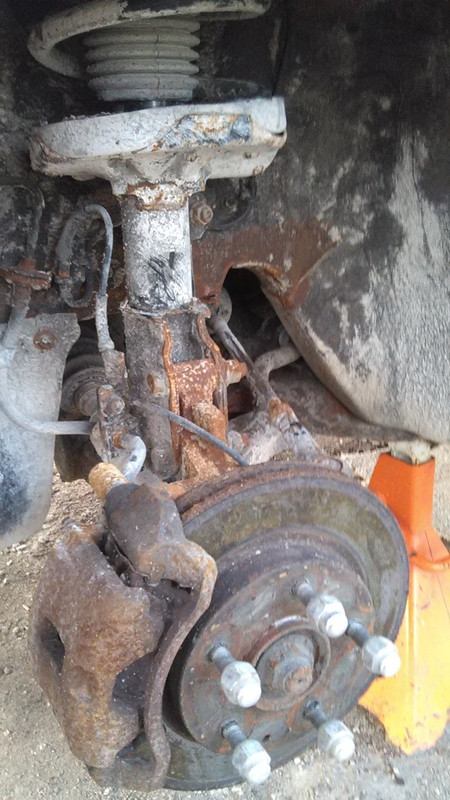 R.I.P. PCB's chassis, at least you can count on rust to keep it together!
P

I have to drive very carefully.

I'm all about DIY... There's very little I will pay someone else to do. AC is one, just because the equipment to do it correctly is very expensive and I can't justify spending that kind of $ for personal use. Windshield glass is another one of those. Safelite quoted me $215 installed for a new windshield (even though I never got it done lol). My time is worth more than that to me, I'd rather pay someone else to hassle with the glue, the glass, etc. Plus if it leaks, you call them, they come back and fix it. If you miss one little spot you can end up with all sorts of wind noise, water leaks, etc.

Just not worth the extra hundred bucks to DIY, but that's just my .02

I'm gunna call a couple more places, if I can get then to do it for 200 then I'm gunna just have them do it. So far I've been quoted about 300 to 350, I just can't justify spending that much. I've put the bare minimum into this car, the most I've spent on 1 part was like 140 for the intake. I got a bunch of spare parts for free with that too, thanks JackieChan [emoji106]
Please log in or register to reply here.