My question is, what is the Max depth and height i can use? Because there are speakers on Crutchfield which say that they don't fit my car, but I have read about people installing them in their cars.
I'm thinking of replacing mine with 4x Infinity Kappa 62ix (https://www.infinityspeakers.com/ca...dwvar_KAPPA 62IX___color=Black-GLOBAL-Current).

Do you think these will fit? Will the door panel go back on? Is the window going to open normally? Are any of the speakers mentioned above a better choice?

Thanks in advance!
B

I don't know if Crutchfield is being conservative or if the measurements for cx5 is wrong but the selection of speakers that fit (according to them) is pretty limited. I have Alpine RS65.2 installed on my front doors (2019) and those aren't supposed to fit according to Crutchfield.

Just select your car and then search for the speakers you like. It will tell you which part doesn't fit (for most speakers I looked at, it says mounting height is the problem) I suspect the mounting height they listed for cx5 is a little off.
M

There are threads on this site and Youtubes that say to Dremel the centers of the old speakers out leaving the frame and mount new speakers to the old baskets. I haven't done it but I think that method probably gives some latitude as to what speakers can fit.
C

@Mazdiod2 the sacrifice of the old front speaker to use as a mounting solution is exactly what my installer did when I replaced with: https://ddaudio.com/speaker/dc6-5a/

So the rear speakers are a more standard size?

I removed one of the rear door panels so maybe next I'll do it right.
C

basically on the front speakers when you sacrifice them and simply rip the cone/spider out you are using the plastic of the factory speaker to give you some place to mount the replacement speaker to. 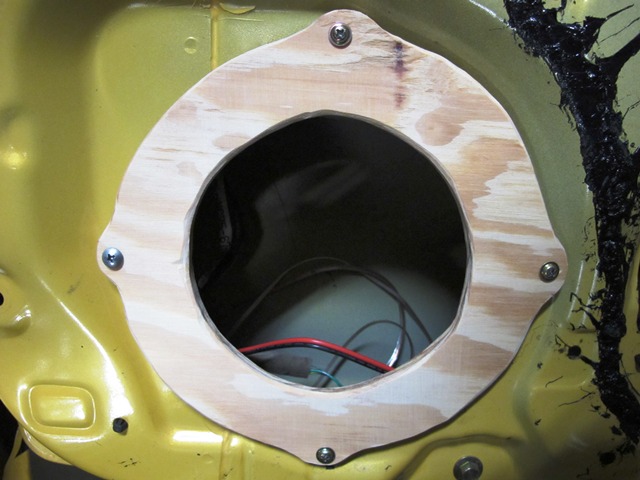 I am crafty enough, so I did dremel the original speakers and used the frame for the new speakers. Everything went almost perfect until the last door, I broke the panel in the inside corner(yeah I'm stupid), you'll see it in the pictures, I put some electrical tape for now until i put some black adhesive.
I also broke a few of the clips but i had extras.
I also added an adhesive foam strip between the speaker and the frame to seal the connection a bit better, instead of putting the speaker straight on the plastic.

Now, the speakers are much better than the factory ones, especially highs and mids, the base even went down a little, but it's much cleaner and punchier, but anyway it was already too much.

In general, the clarity is way better and quality wise you hear the difference.

If anyone has any questions i'll try my best to answer them.