i do have 2 proteges though lmao.
Click to expand...

I was about to say the same thing!
M

Love everything about your build! Coming out great! What did you use to paint the engine bay?
T

Maxx Mazda said:
I needed to address the cooling setup on this car. Nothing wrong with what I had before, I just didn't particularly like it. With the A/C condenser and power steering cooler now gone, I had tons of room in front of the radiator to work with now. I decided to build a fan shroud and mount two pusher fans instead of the pullers I had before. This serves two purposes; it frees up room behind the rad for a bigger turbo, and by building a shroud, makes the cooling system more efficient. Some argue that when fans are mounted on the front of a radiator, enclosing them in a shroud will disrupt some of the natural airflow at speed. Because I've got the fans controlled by the Haltech, I can have them come on whenever I see fit, and I maximized the size of them, so there really isn't much radiator that's covered by the shroud.

To start, I took some measurements of the PWR triple-pass radiator, and drew up a blueprint of what I needed. With material ordered, it was bent into shape to make the shroud.

Glad to see ur still workin away on the p5 maybe i could come take a look again sometime. Still having oiling system and idle issues on mine
O

How is the project coming along ?

Haven't touched it in awhile. Got the exhaust modified and all tacked up. Finish welding next week then sending the down pipe off to the ceramic coater.
D

i like all the new stuff you do. very nice work.
F

did you get car started. I know the cold ass winter is coming

Nope. She's tucked away for the winter under a cover in the garage. Not much left to do on it really, might pick away at it over the winter. Basically, just need the downpipe ceramic coated, and to install the modified Corksport 80mm exhaust.
M

What did you do to the CS pipe?

Modified the front section for a V-Band flange and got rid of the 2.5" step down, so I have a true 3.1" turbo back. Also, the rear muffler section needs to be shortened 4" to bolt up properly.
M

Rather than re-weld the mount that's on the muffler and mess up a nice looking exhaust, the last mount that's attached to the frame of the car is easily removed and re-welded 4" forward. Way cleaner than hacking up a nice exhaust.

The guy guy I've got TIG'ing the exhaust up welds amazing like a robot. I'm excited to see the finished product.
M

I need to have a new exhaust made too for my hiboost setup. Hopefully 3", but will probably end up settling for 2.5 because my downpipe is 2.5 and any bigger than that and I'll probably have to go under-axle in the rear because my lateral links are so high up. They're hitting as is with the 2.25.

Cant wait to see your stuff though, always the best of the best.
S

Will get back on this hard after the new year.

Well, after a long ass winter with the car in hibernation, it's time for a long overdue update!

If you remember, the Corksport 80mm exhaust for the Mazdaspeed sedan needed the final muffler section to be modified. Here we can see it compared to the P5 specific unit for comparison: 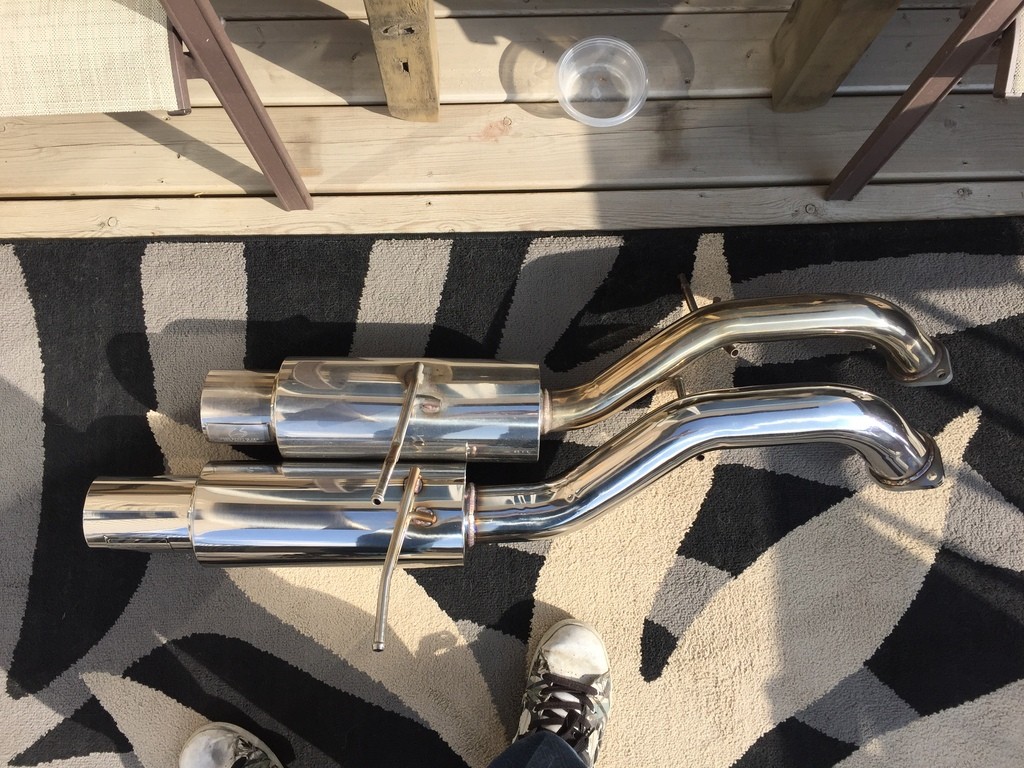 With 4" removed from just in front of the can, here is the alignment with it just resting in place. As you can see, we need to modify the angle at which it meets the pipe. Also notice how the can must be rotated counterclockwise to keep the mount parallel while still keeping the logo perpendicular to the ground. 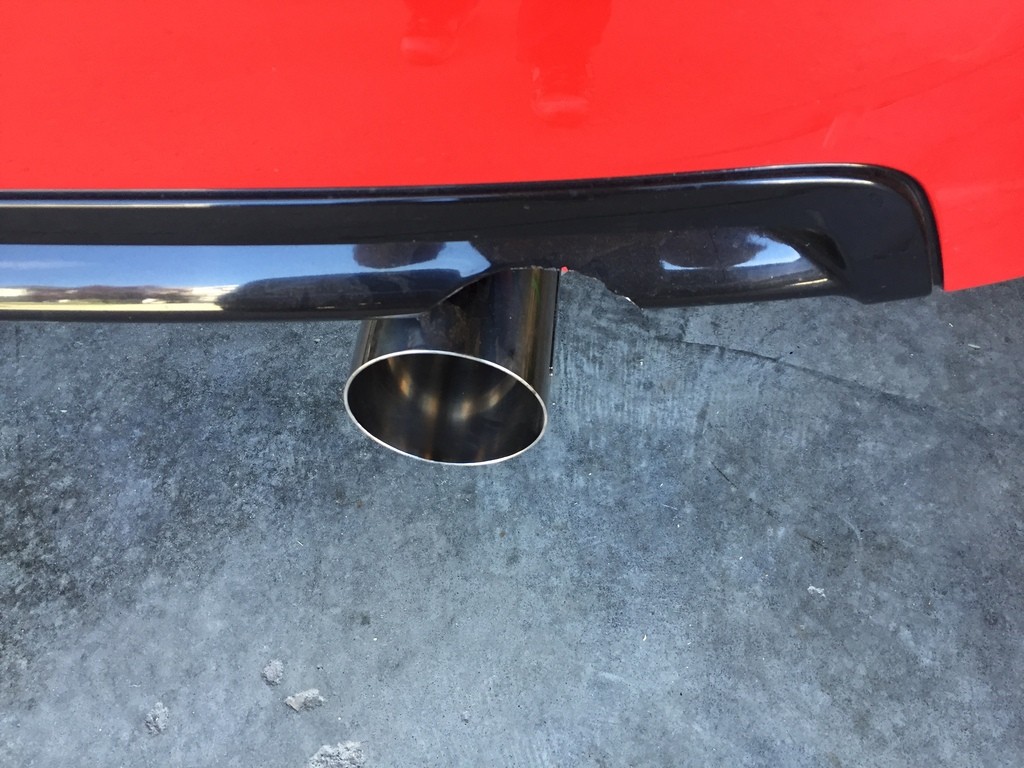 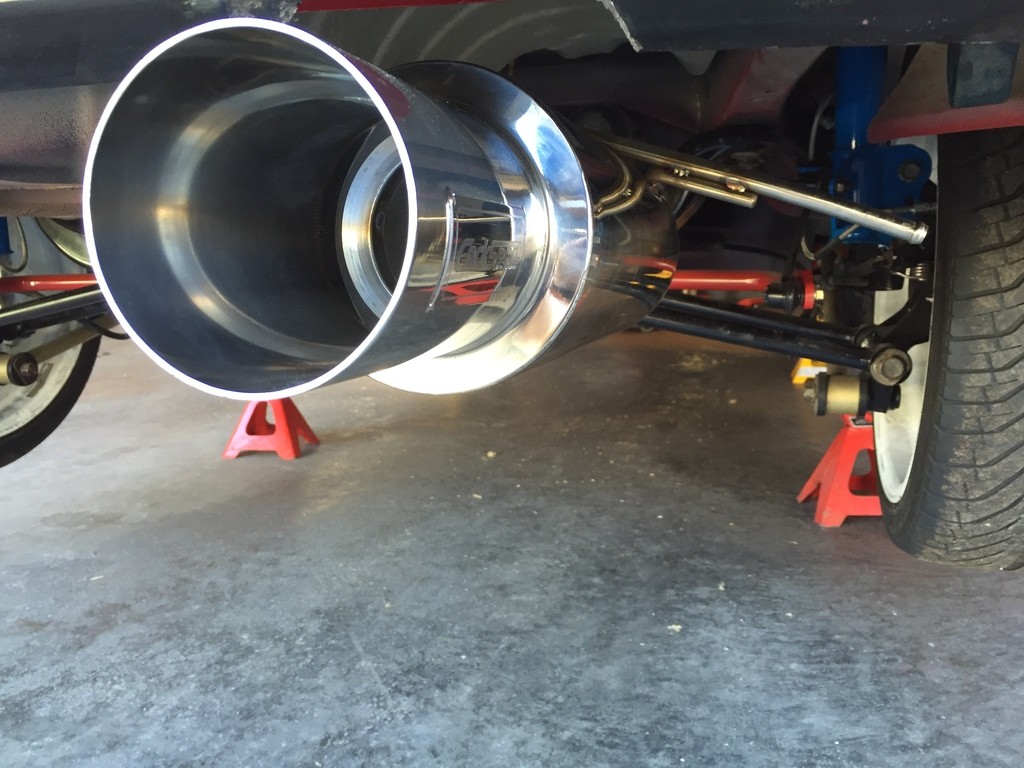 With the measurements taken, and everything "dry fit" I dropped the system off with legendboy for finish welding. His TIG skills are out of this world! Especially on stainless, looks like it came that way from the factory. 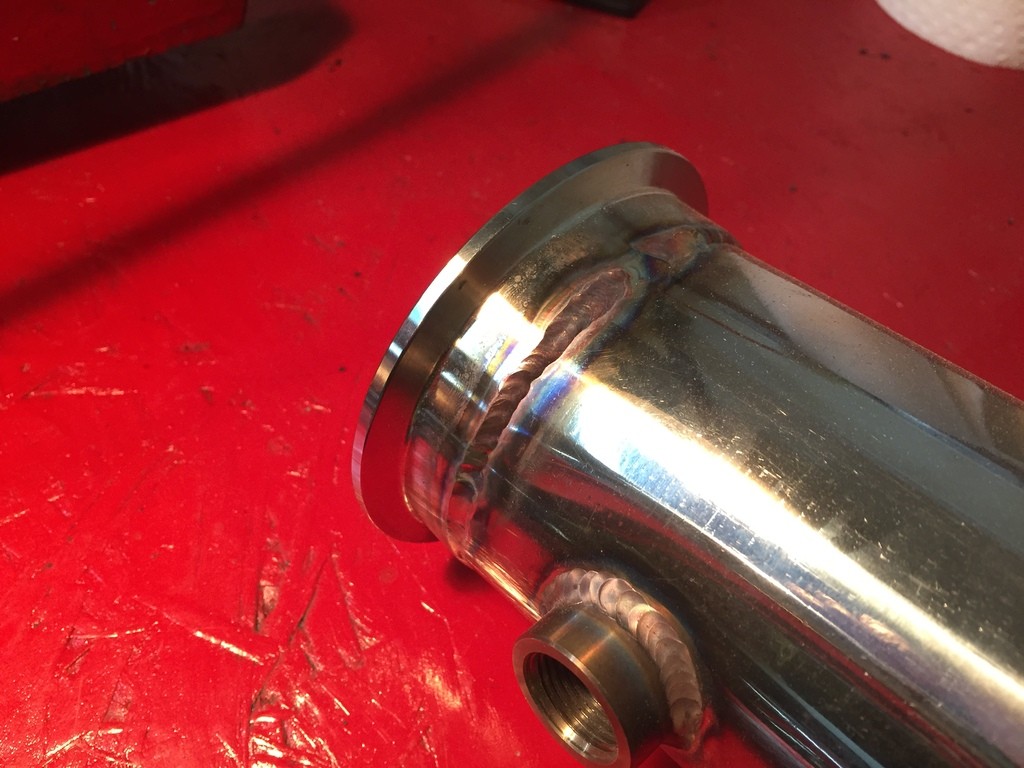 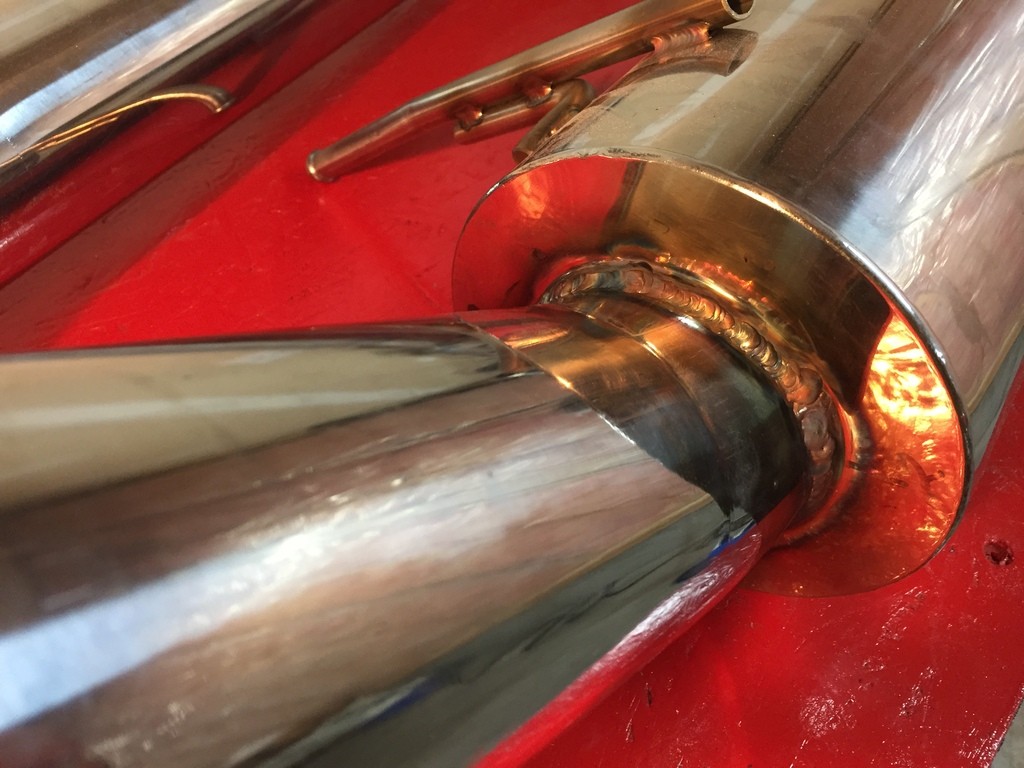 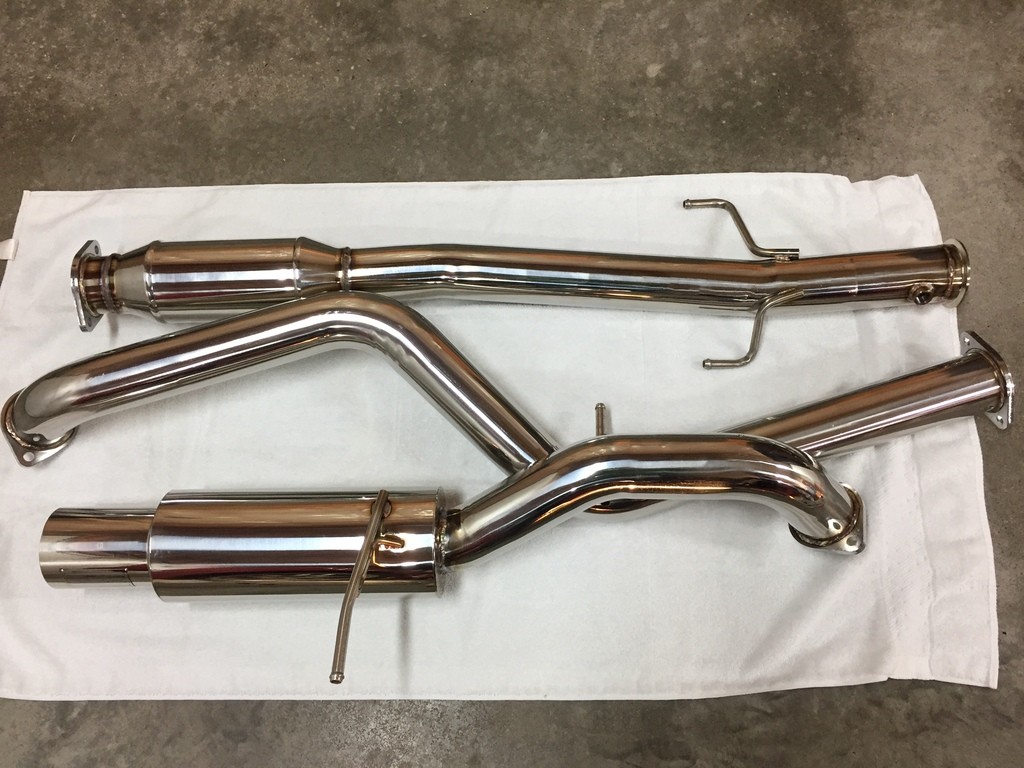 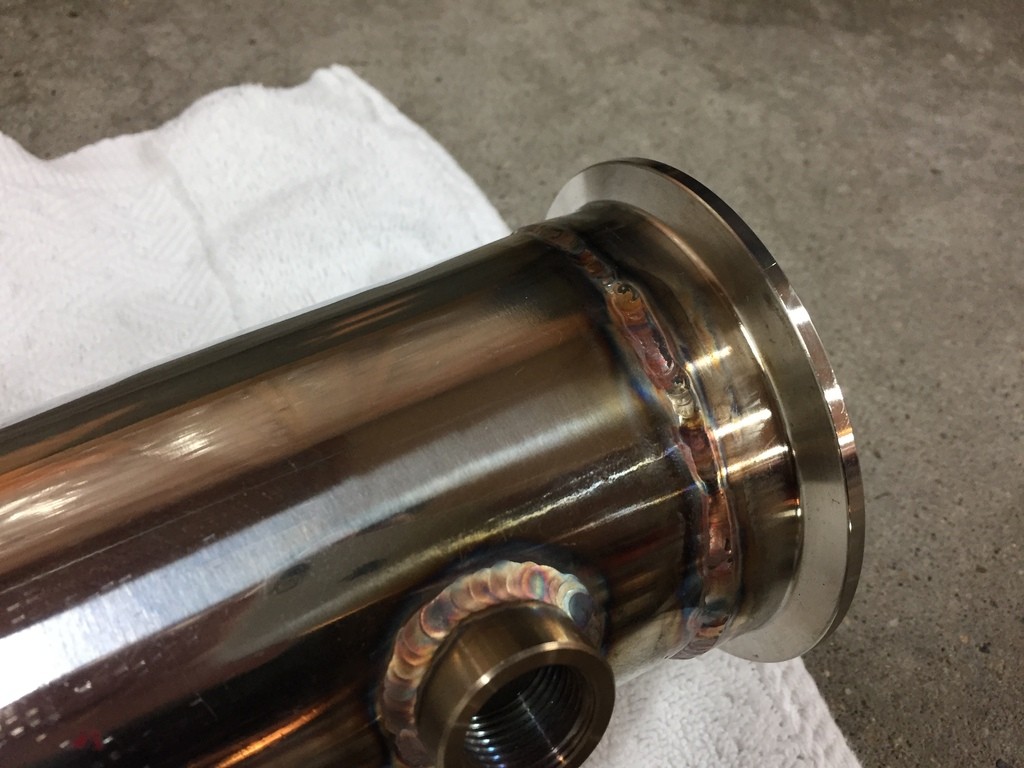 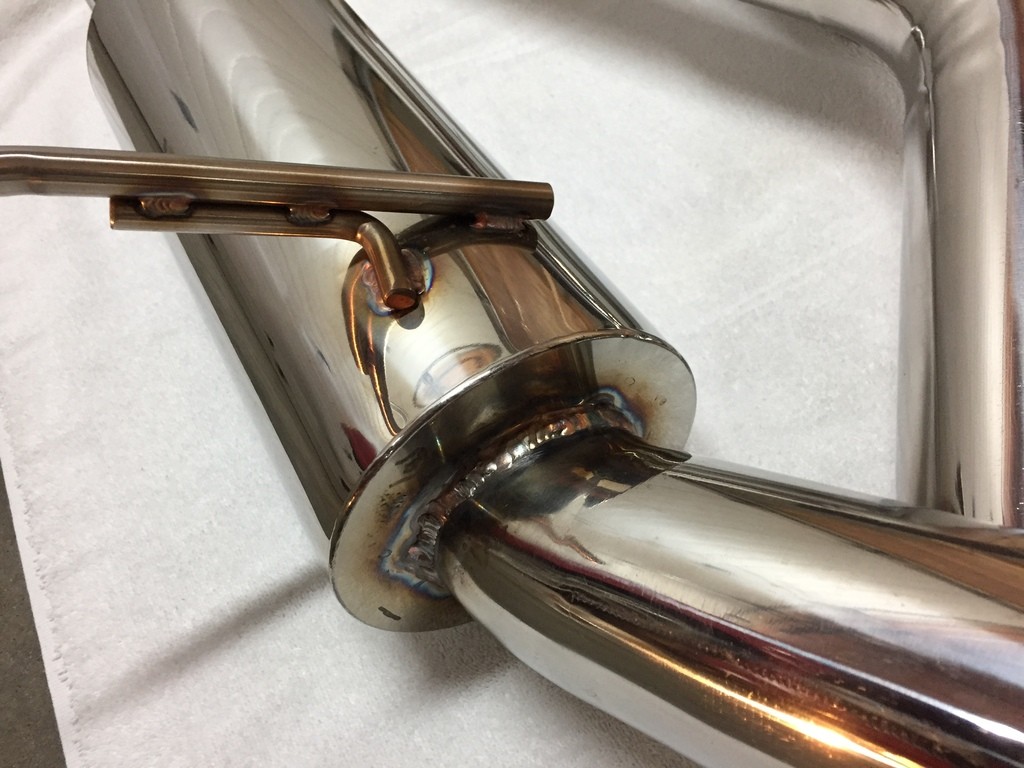 Rather than ruin the muffler by moving the hangar mount, I elected to move the mount on the chassis of the car itself. After taking measurements, the stock mount was removed, the frame ground flush, and re-welded on in the correct place. Some "rocker guard" was applied to ensure that it would never rust, and we have a factory looking mount. 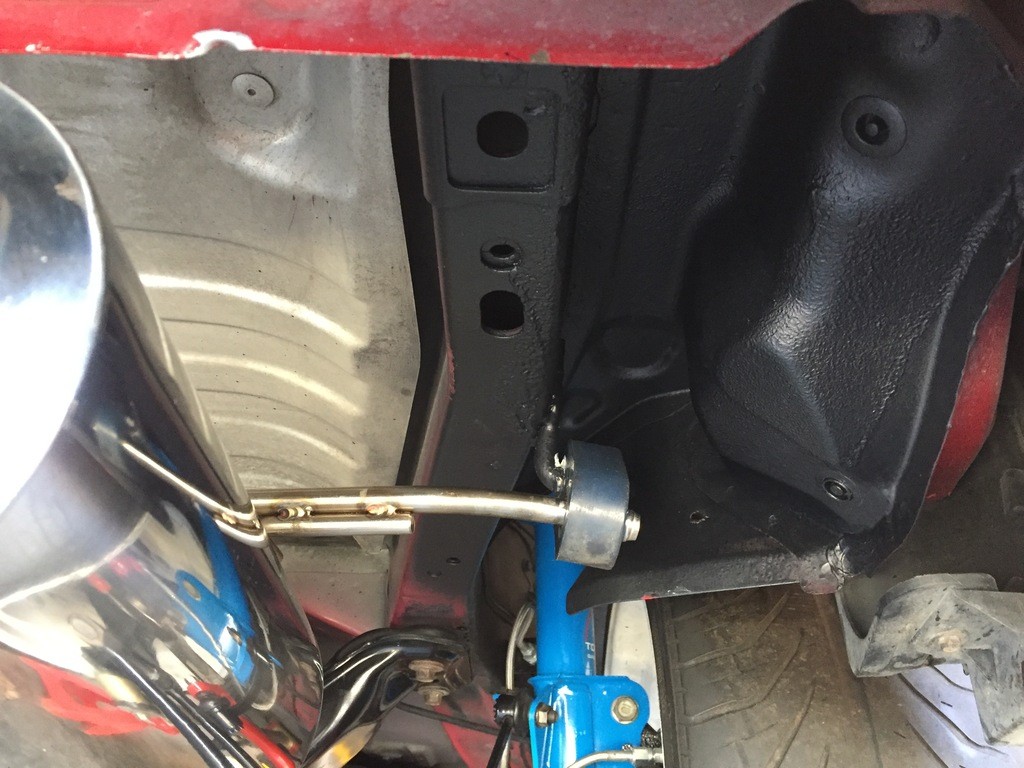 The finished exhaust installed and tightened down using all new Corksport hardware. I decided to keep a little more space between the muffler tip and the bumper this time, as the original system caused the bumper to melt whenever the anti-lag was used. 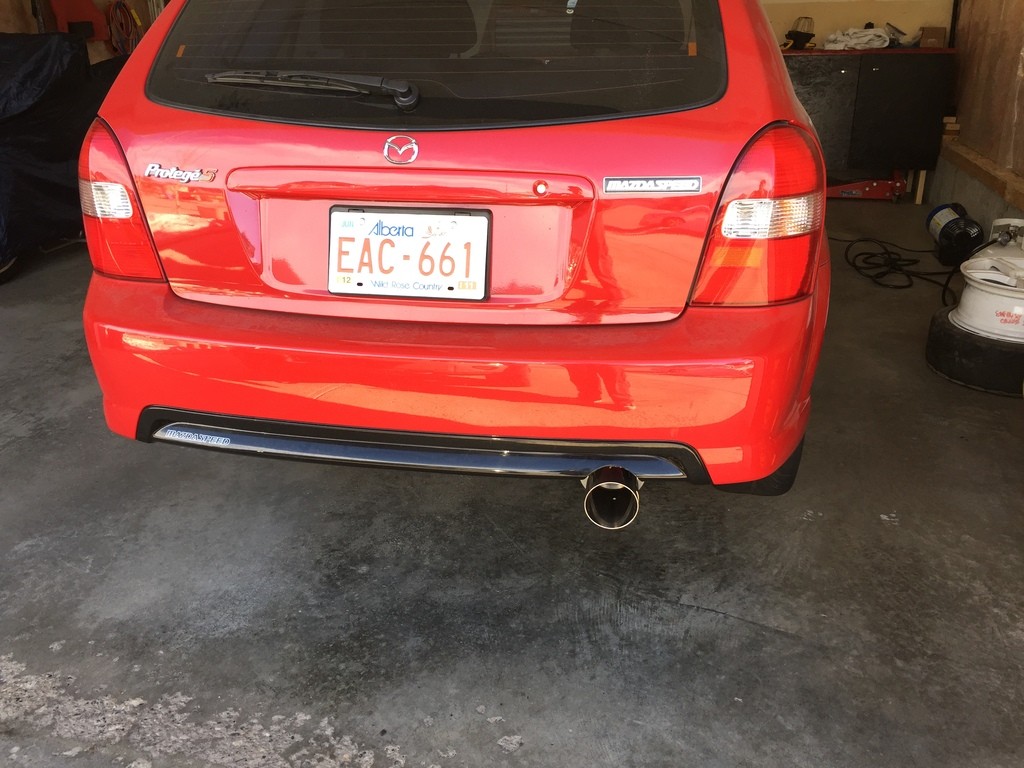 A few shots of the finished system, bolted up from front to back. The V-Band flange is amazing. Takes a bit of work to make sure its lined up perfectly, but it will provide an excellent restriction-free path for the exhaust and it looks clean as hell too. Next step is to remove the downpipe and send it and the hotside turbo parts out to be ceramic coated . 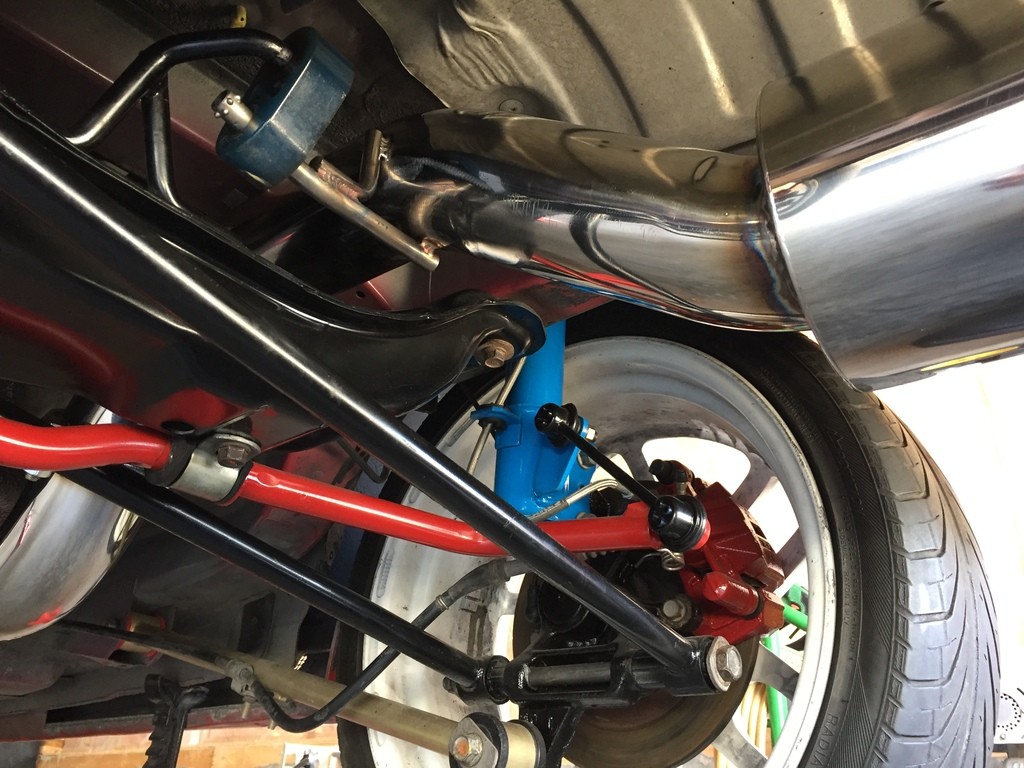 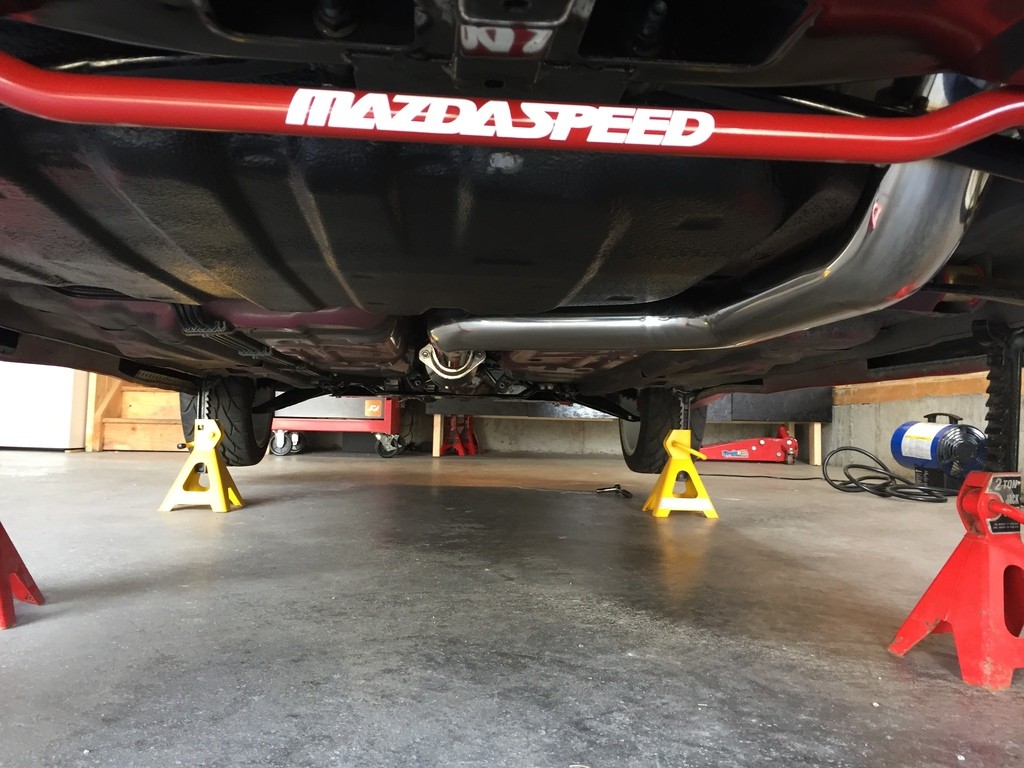 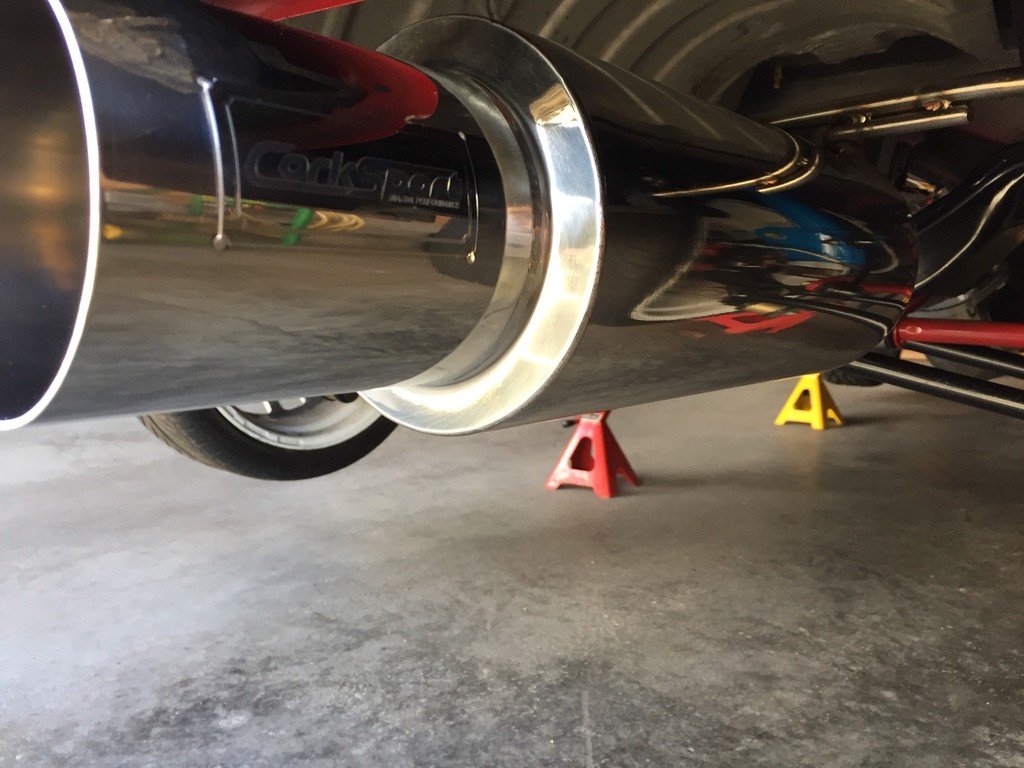 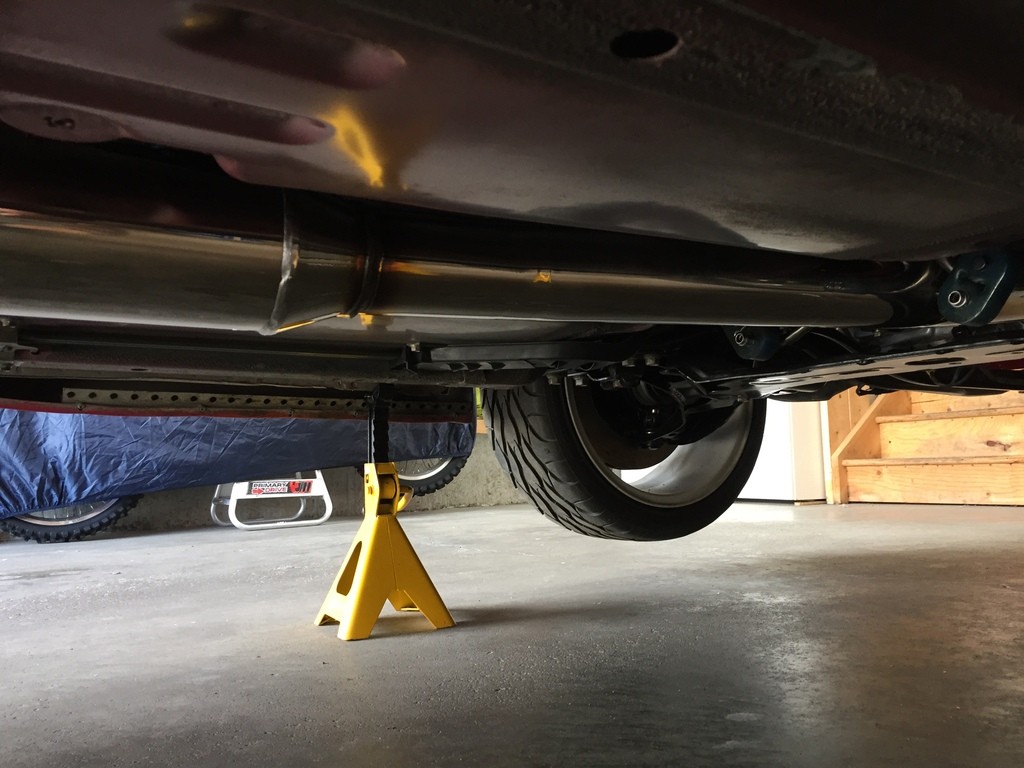 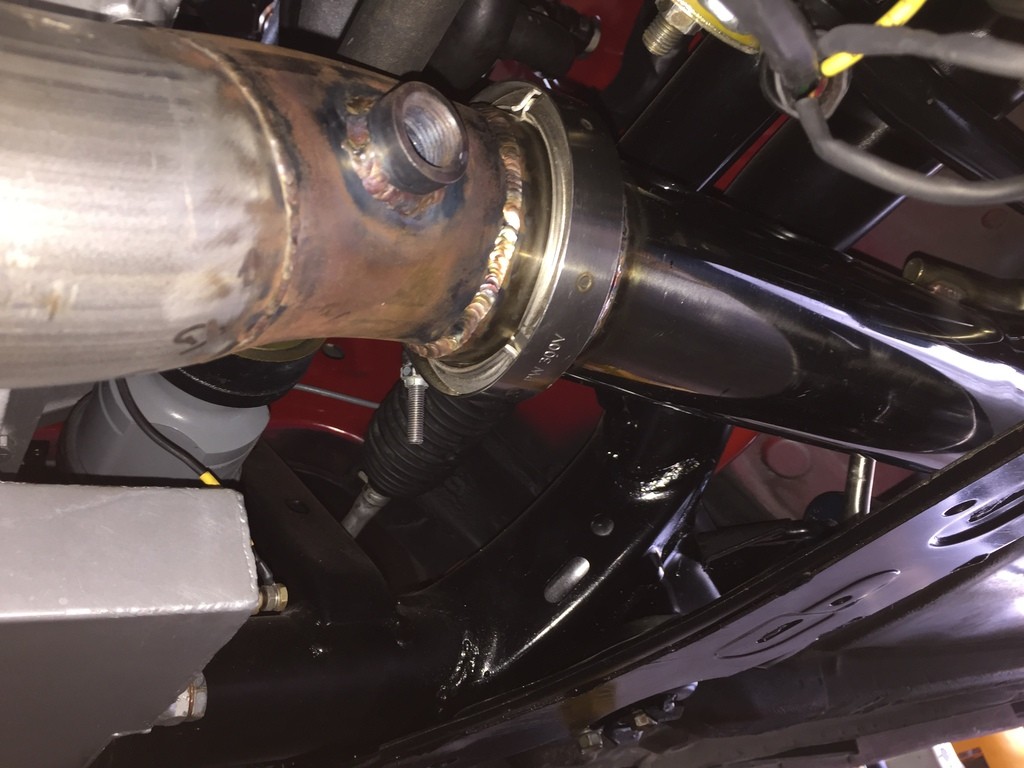 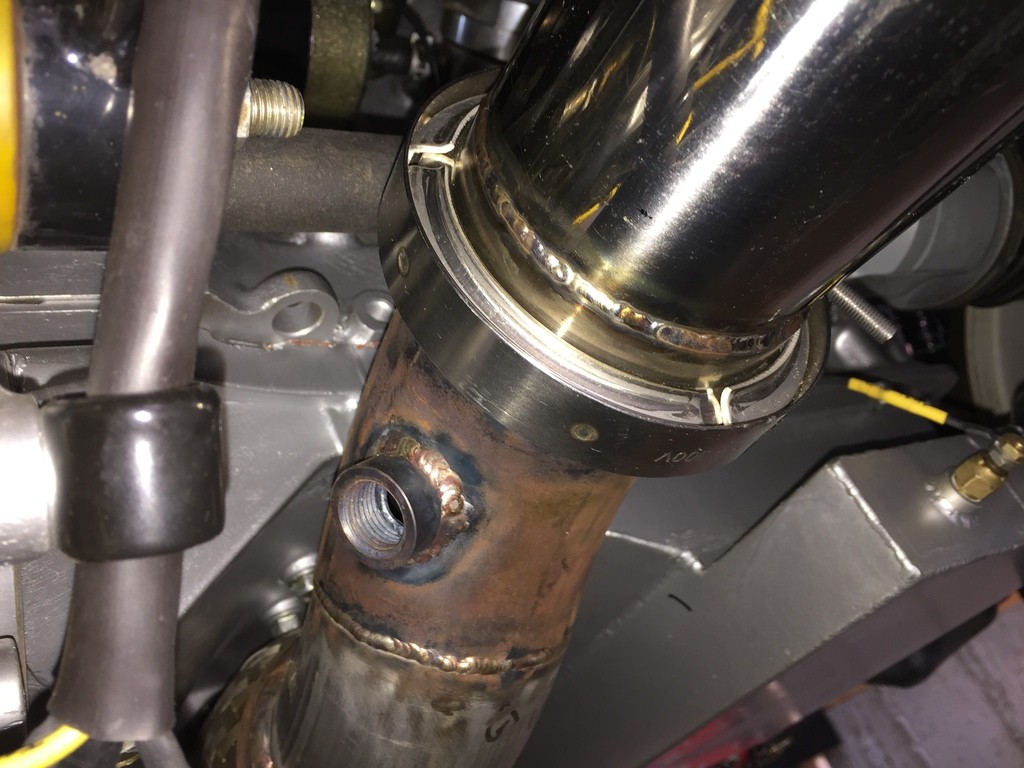