mzmtg said:
Yeah, it looks like I may be chasing some cancellation with that boost at 400. I'll cut that back a little.

The volume scale on the head unit maxes out at 35. In my previous testing, I have confirmed that it does not clip with a 0db sine wave tone at 40Hz or 1000Hz played at max volume (35).

With the EQ set as described above, with a couple of big boosts, now the sound actually stops getting louder at a volume setting of 29. Turning it up past 29 doesn’t make the music any louder. So It looks like the head unit is cutting overall output when I’m asking it to put a bunch of power into a couple specific bands, possibly to avoid distortion. I don’t think I’m hearing any distortion in normal listening.

My previous setup was using the gains in the amp and the head unit crossover to get that ~12db boost in the sub bass that we all like. The result was, as everyone knows, it’s hard to get the subs and the mids to stay together when you turn it up.

"5. The subwoofer level control in MS-8 isn't a level control for the subwoofer output channels. It's a shelving filter that boosts bass in ALL channels below 60Hz, but never above 160 Hz. When you boost or cut, the slope of the filter is adjusted. This helps to maintain the illusion of bass up front by sending the appropriate amount of midbass to the front speakers and bass to the subwoofers. It also maintains the crossover point. Here are a couple of graphs that illustrate this and why it's better.

The first one is a conventional control. It's pretty obvious why this moves the image of the bass to the back and sounds boomy. There's too much interaction between sub and midbass. This is why people claim that "underlapping" the bass is important and why so many people try to get big-assed midbass drivers in the front of the car and cross the sub at 50Hz. With MS-8, that's totally unnecessary, and the evidence of that is in the second graph.

I use a pair of 6" speakers driven by about 40 watts in the doors, another one in the center channel and a 500 watt amp on a pair of cheesy 10" woofers in an IB in the rear deck. The bass is seriously anchored to the front and the midbass is great. No hassles, no constant tweaking and I can boost bass by as much as 10dB on top of the target curve (which is a total of about 20dB) without the image shifting to the rear. I think my crossover point is about 80Hz, 4th order. 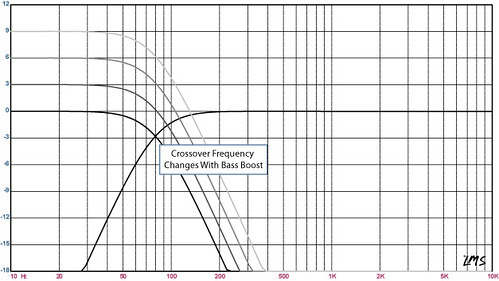 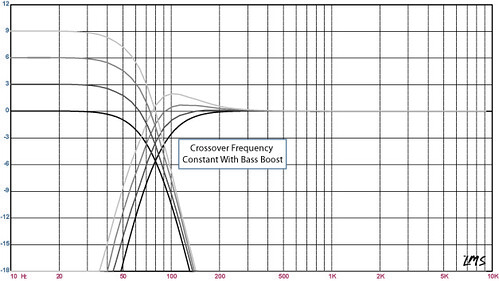 Looking at my EQ’d frequency response above, it looks like my sub-bass is actually more like 16-18db hotter than my mid-bass bands. So I can probably pull that bottom EQ band down from +9 to +7 at least. I’ll give that a shot later today and see how it goes. If it gives me back some more headroom in the head unit to play louder overall, I’ll be happy with that too.
Click to expand...

mzmtg said:
I found a spreadsheet that converts the .at files from the Audio Tool app into a .txt file of 1/3 octave measurement data that can be imported in REW.

So heres the comparison between my left & right channels with no EQ. I can see the right side is quite a bit down from 150 900 hz. 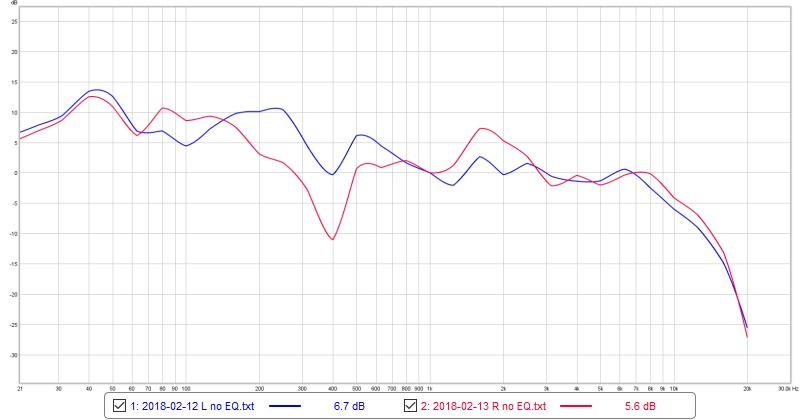 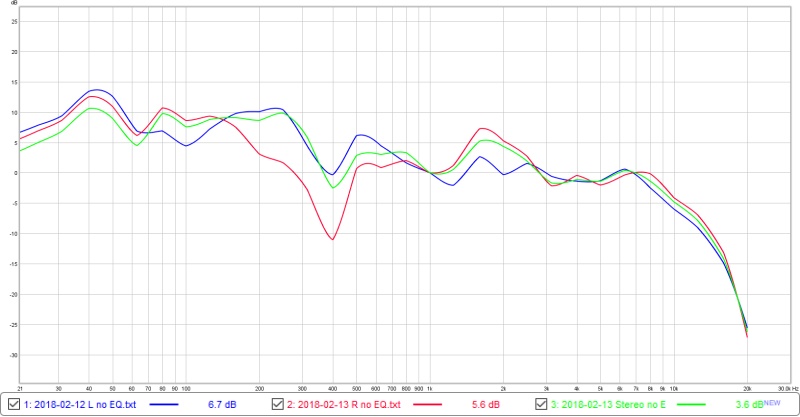 So I put together a couple of different EQ setups to try to bring the stereo response closer to either the Whitledge or JBL house curves. Obviously with a graphic EQ, I couldn;t just run the auto EQ function. So, I set my avaiable filters up and then adjusted them manually to try to get a decent curve fit. I tried to set the target level down so most of my filters are cuts with much smaller boosts. I also did not try to fill in the big hole at 400 Hz. Ill try each one and see how well they work and how I like the sound.

Heres the Whitledge curve EQ settings and the predicted response I came up with: 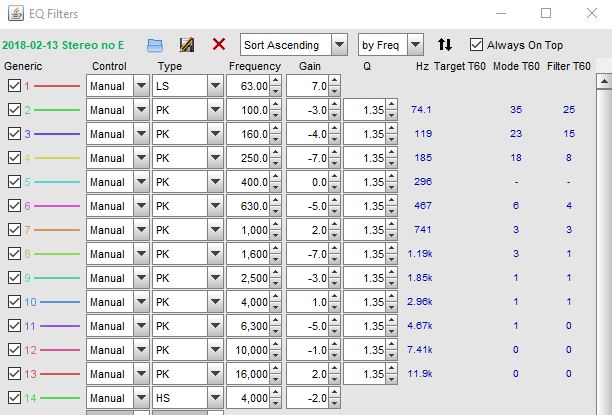 Here are the settings and the predicted response for the JBL curve. 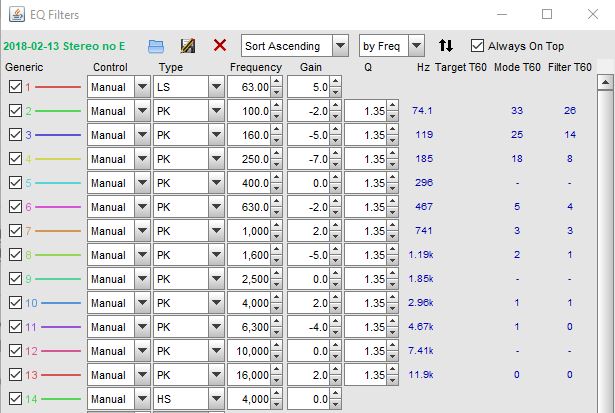 mzmtg said:
Oooh, neato. I measured the frequency response after putting in the EQ settings I figured up manually in REW and this is what I get:

VERY close to the target. So REW works! Who knew?
Click to expand...

mzmtg said:
Well, hell, I just realized that REW can AutoEQ and optimize my graphic EQ. I didn;t see that I could ask it to just "optimize gains" on the filters where I specify the frequency and Q.

So, I'll see how it's numbers compare to mine... 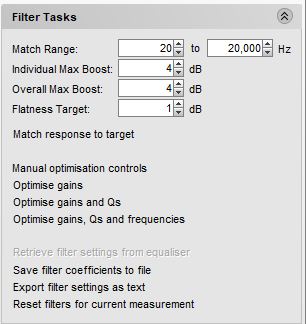 
I tweaked things a bit more today and I'll update here with the results....
M

mzmtg said:
In an effort to get some headroom back on the head unit's "preamp", I followed Andy's advice for those that don't have a low pass shelf filter in their DSP. I lowered the subwoofer cutoff frequency half an octave below the midrange HPF, so 60Hz and 80Hz, repsectivley and then turned the gain up on the subwoofer amplifier channels to get my +9db (or so) boost there. 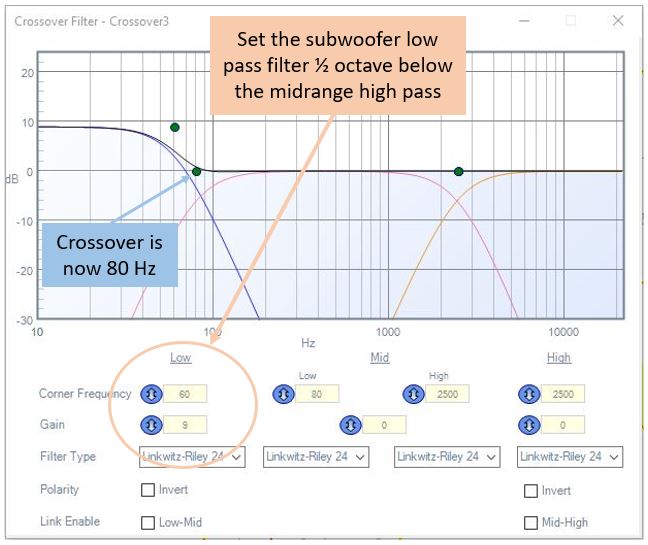 This way I could get rid of the big boost in my EQ at 63Hz.

So with these EQ settings, I got this response: 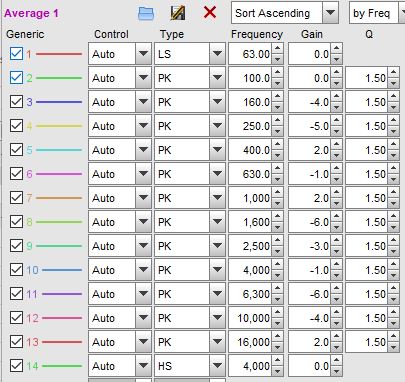 I definitely have the headroom back in the head unit to play louder overall, but the subwoofer is not nearly as well integrated as it was before.

I'll keep messing with it (of course) to see if I can find a good compromise.
Click to expand...

New goodies in the mail yesterday 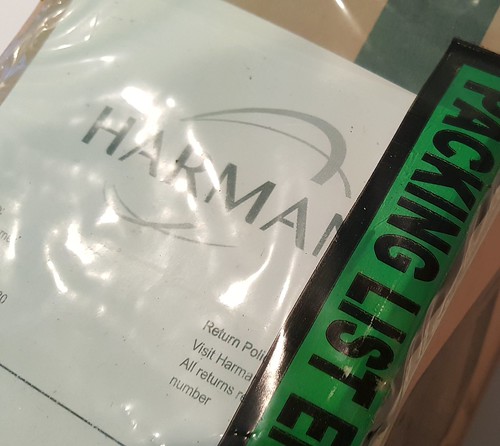 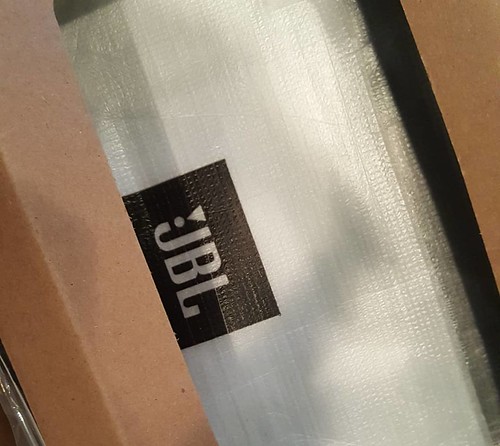 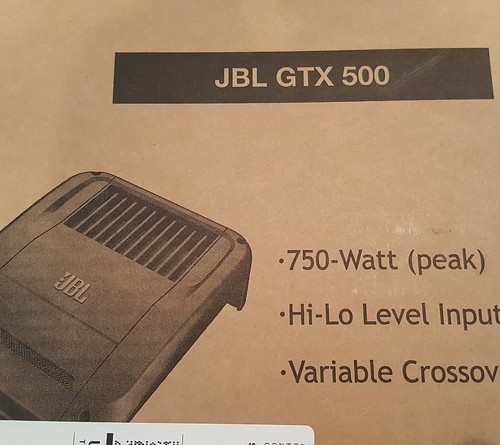 Wiring from KnuConceptz is on the way too...
M

And there she sits, mounted under the passenger seat: 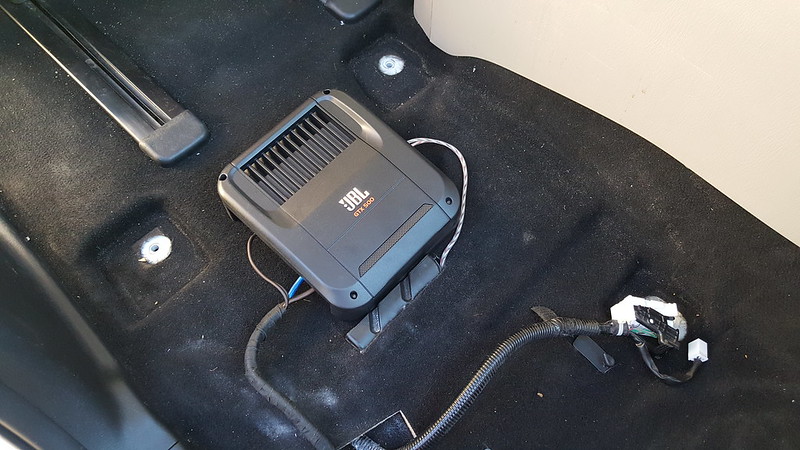 I did end up running a turn-on lead from the head unit because it turns out that JBL's auto turn-on function sucks. I had to turn the sound way up for the amp to recognize the signal and kick on. Then if I turned it down to a normal listening volume, the amp would shut off. PITA

Thanks for documenting your install. Looks great and I bet it sounds awesome.

My wife also drives a 2010 CX 9 Touring and I've been contemplating upgrading the sound system. Is there anything you wish would have done differently or any part of the install that was particularly difficult?
M

zuke8675309 said:
Thanks for documenting your install. Looks great and I bet it sounds awesome.

I went with the Dayton tweeters for a couple of reasons. First, I broke one of the JBL drivers while experimenting with different mounting positions when I had all this gear in my previous car. Second, I never really was happy with the sound of the 3/4" silk dome JBL tweeters. The Daytons are a great bang for the buck. They're about $20 each and sound MUCH better.


zuke8675309 said:
My wife also drives a 2010 CX 9 Touring and I've been contemplating upgrading the sound system. Is there anything you wish would have done differently or any part of the install that was particularly difficult?
Click to expand...

One thing thing that is difficult is getting speaker wires into the doors through the Molex plugs. So, I didn't do that. I have connected to the factory speaker wires for the last couple of feet to the door speakers. Not a big deal to me right now, but it's worth knowing.

There's not a lot of space for locating amplifiers. I am keeping the storage under the rear cargo area open right now because I may end up building a subwoofer enclosure into it to get all my cargo space back. However, there are amps on the market that are a LOT smaller (dimensionally) than the ones I have, so that obviously opens up more mounting options. Look at this tiny thing!

Overall, the CX-9 is pretty easy to work with. It's easy to take apart and put back together without breaking clips off or ending up with a bunch of misaligned panels and new rattles when you're done.

Feel free to hit me up with any specific questions you might have once you get into it.
Z

Thanks for the info.

I may go the budget route and just swap out speakers, run them off the factory head unit, and call it a day. It wouldn't win any awards, but a definite upgrade for sure.

However, if the wife says "oh no, I've been driving with this tired old factory head unit for far too long. I need something that rocks and has features." Well, then I'm into a complete overhaul.

I have two amps that I could use which I've been storing for many years, a Sony XM4045 and an ESX Zed Audio Q60.4. Both are nice old school amps, but they are definitely huge so mounting either one or both is a bit involved.
M

zuke8675309 said:
I have two amps that I could use which I've been storing for many years, a Sony XM4045 and an ESX Zed Audio Q60.4. Both are nice old school amps, but they are definitely huge so mounting either one or both is a bit involved.
Click to expand...

Well, I can put away the microphone and the analysis software.

I have another toy from JBL on the way 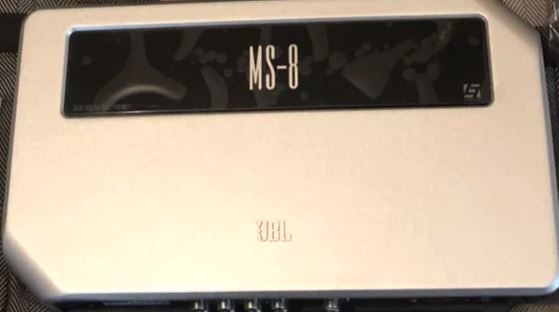 I'm also going to try using this JL Audio Bluetooth receiver as my only input to the new processor. Then I can just do away with the head unit entirely since I don't really need it for anything at that point. 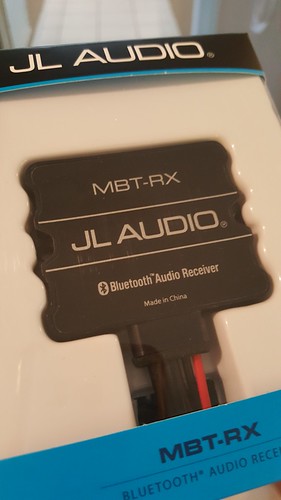 Got the MS-8 installed a bit more cleanly this week. I also took some measurements of what it's doing to the sound, see here.

I put the factory head unit back in since Bluetooth is my only source now. I still have the MS-8 remote mounted next to the shift lever as I use it for my main volume control. The MS-8 display is mounted in the glove box. I rewired the main unit and slid it up under the front seat from the front. I still need to make some brackets to reposition it slightly so the wiring connections will be less vulnerable to kicks. 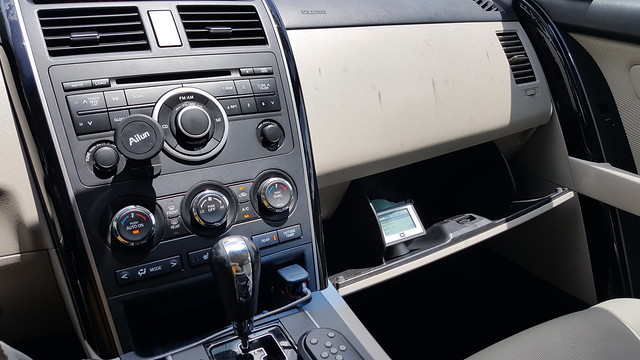 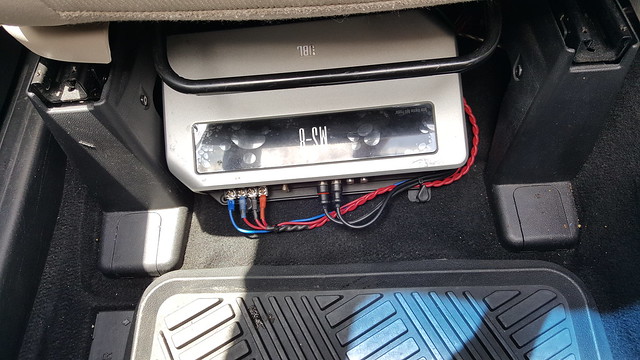 It turns out that my hot-glued tweeters can't handle the Florida heat. After re-gluing them a few times, I've replaced them. P-E had the same tweeter with a built-in wave guide on sale last week, so I picked up a pair. These drop right in and won't fall apart....hopefully. 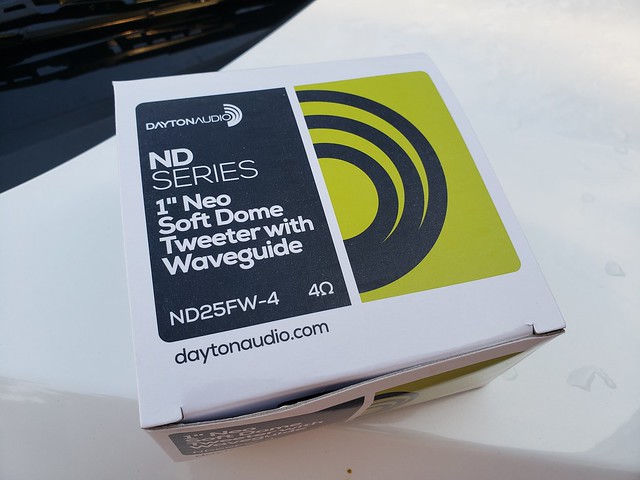 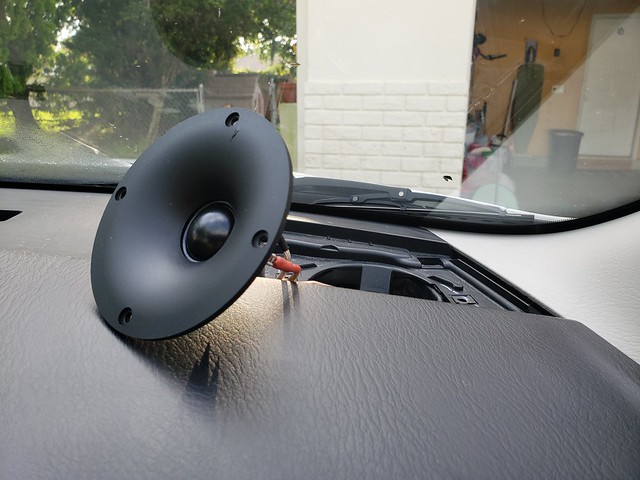 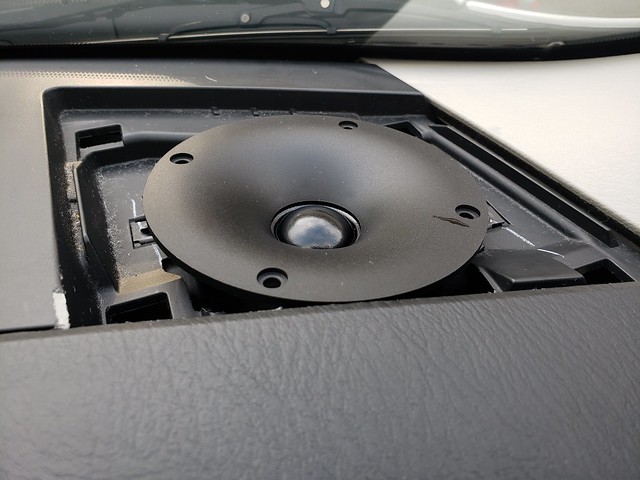 I did retune the MS-8 afterwords. Everything sounds pretty much the same, as I would expect. If anything, these tweeters have a theoretical advantage in the upper dash location as they direct all the sound energy at the glass. This way I'm not hearing both reflected sound and direct sound.

But like I said, they sound the same to me.
M

I picked up a used Arc Audio KS 300.4 amplifier to replace the MTX 4 channel on my front speakers. The higher quality design and added horsepower (4x~100 watts VS 4x55 on the old MTX) make a noticeable difference in sound quality. Overall clarity and detail is better and it playes quite a bit louder without sounding strained.

Unfortunately, it doesn't quite fit under the front seat the way the old amp did. It will fit if I remove the seat, place the amp and then put the seat down on top of it. 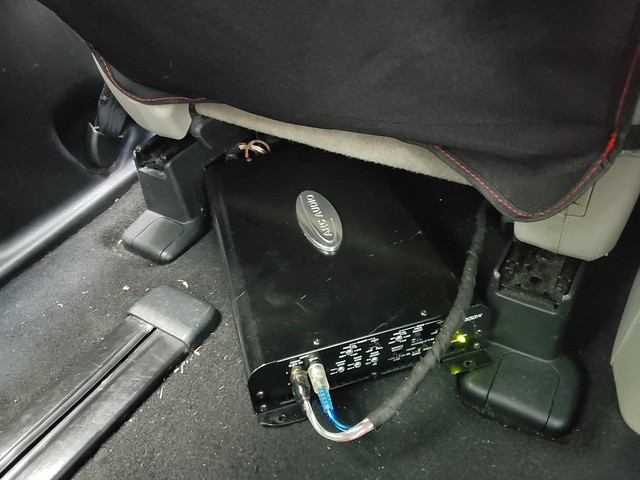 More about the KAR series Class G/H amps from Arc: 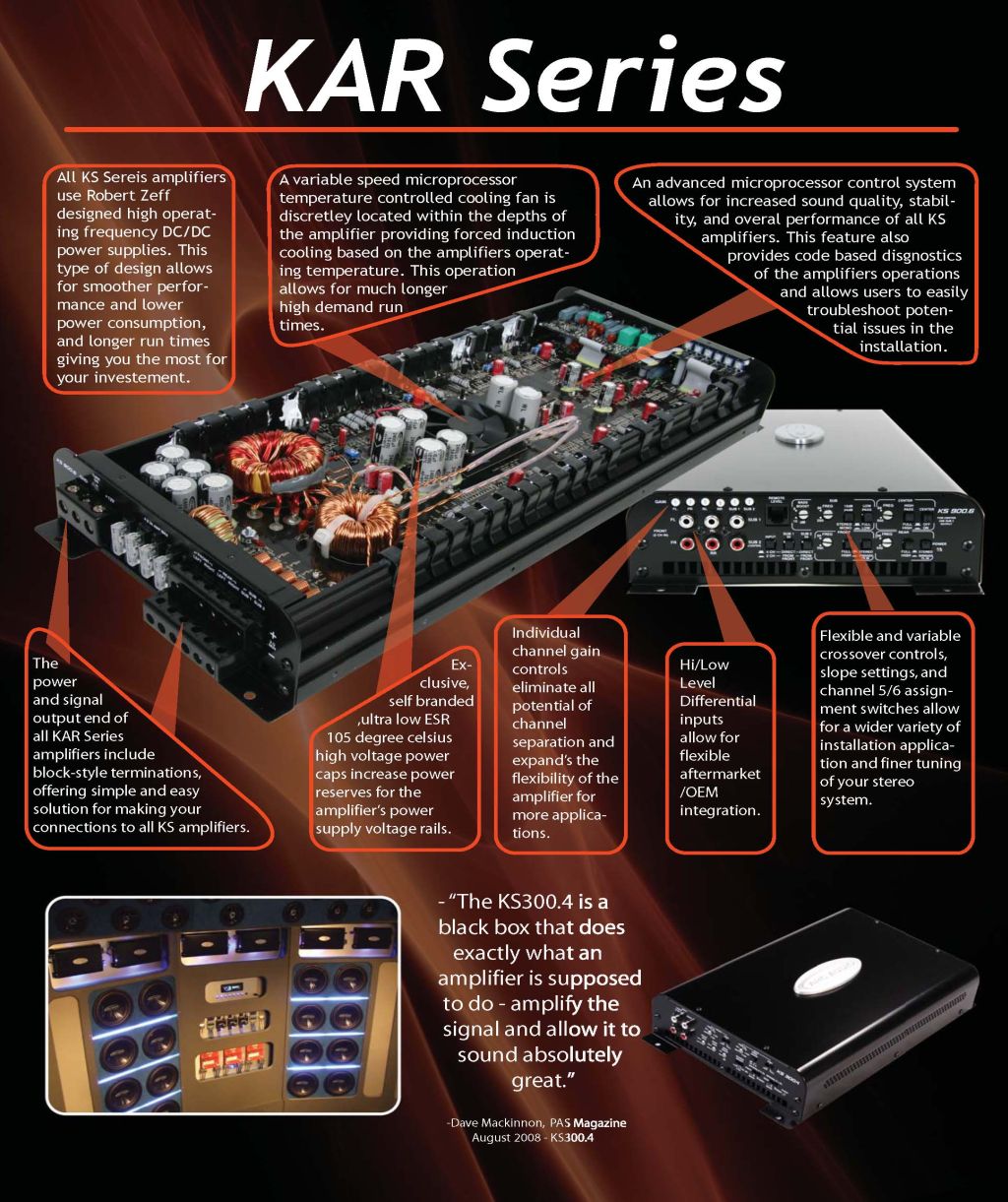 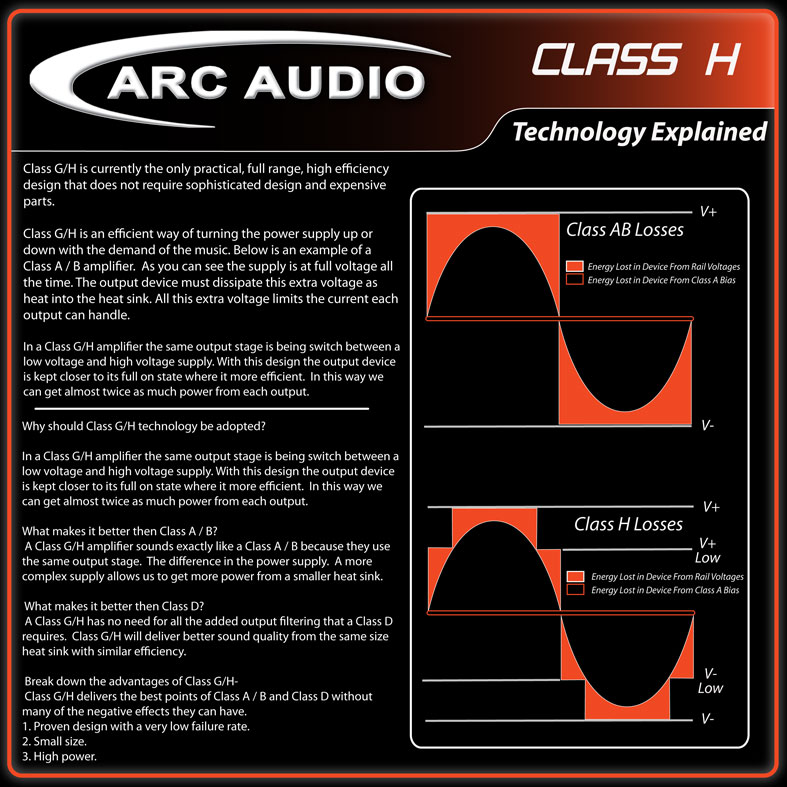